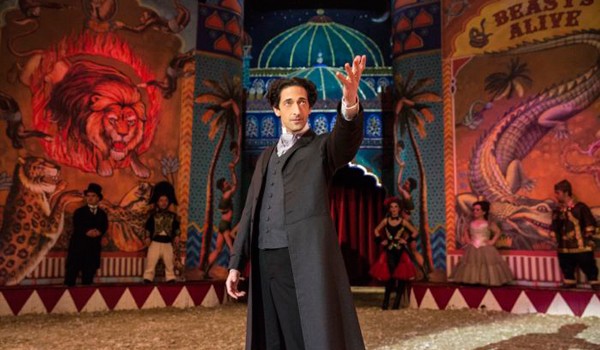 Well, I finally got around to watching Houdini (2014), the History Channel’s 4-hour miniseries on Harry Houdini’s life, starring Adrien Brody as the greatest magician in the world. As always, I have to urge everyone reading this to take a REALLY LARGE PILE OF SALT with this biopic because it more or less tosses history out the window and inserts a whole lot of wildly inaccurate and highly speculative occurrences in the name of jazzing things up a bit. Or maybe just treat yourself a nice Patron margarita with a rock salt rim and sit back and enjoy Adrien Brody all chained up and half naked. After all, as one of the characters says in the show, “Magicians are liars, and the best liars are magicians.” So, maybe that’s all part of the grand plan for this show? Apparently, the DVD special edition contains this disclaimer at the start of the film:

What you are about to see is FACT.
It is also FICTION.
We defy you to tell the difference…

Which probably would have made a lot of the historical weirdness in this film make more sense when put into context. Considering the series was produced by the same channel that brings us Ancient Aliens, I wonder why they shied away from including that disclaimer on the standard release version? I don’t think it would have ruined the magic … er … illusion.

If there’s nothing else I’ve learned about magic, it’s this…

If you’re looking for a good place that digs into the wack-a-doodle “history” presented by Houdini, I recommend you pop over to Wild About Harry and read up on it. Spoilers within, obviously.

So where was I? Oh, yes, Adrien Brody in chains. Mmmmm… Overall, the visual aspect of the show is really strong. Birgit Hutter was the costumer for the show and Gregor Eckstein did the makeup, and I think both deserve some recognition for pulling together a cohesive look, even if it was largely fantasy. Some things, however, were a bit jarring, like how Bess Houdini (played by the too-cute-for-words Kristen Connolly) seems to be 20 to 30 years ahead of fashion throughout most of the first part. She has her hair cropped in a short bob throughout the late-1890s until about 1914 when the first part ends, which I was surprised to find out, was actually how the real Bess wore her hair during that period of time. Hair aside, Bess’ makeup on screen is heavy. REALLY HEAVY. Decades before the heavy kohl eyeliner look came into fashion in the ’20s, she’s staring wide-eyed at her husband’s stunts with veritable raccoon rings around her eyes. And really bright red lipstick. As a fan of bright red lipstick, I want to know what the makeup artist is using on her, but as a costume historian I’m doing a lot of head shaking. Me IRL watching this show.

Truthfully, the costumes in the show are really hard to spot details on, since a lot of the actors are filmed in shadows or dark rooms (suspenseful, sure, but damned hard to write a blog post about clothing as a result). As such, you don’t find a whole lot of interesting things to look at until midway through the first part, as the vast majority of clothing on the screen are men in suits. And but for a cravat here, or a tie there, there’s honestly not a lot to discuss because, well, suits. Nice cravat, Mr. Secret Service Director. Shall we debate the merits of the notch lapel versus the peak lapel? The first scene we see Bess in, she’s dancing, so it’s hard to get a good pic of her outfit. I’m really only including it because this establishes that Bess was a vaudeville performer when she and Harry met. I’m only speculating, but her really dark makeup throughout the show might be some kind of visual cue that she’s different. Harry actually asks her why she has to wear such heavy makeup during their wedding night scene, and she brushes it off and keeps piling on the black eyeshadow. You do you, grrl.

This was a weird one … I like the little bolero and the color combo is definitely Bess’ character color palette, but looking closely at the dress itself, I’m pretty sure it’s a basic calico “prairie” dress. She’s not wealthy at this point, so cotton calico is an appropriate choice, but that little bolero over it makes for a weird combination.

Also, that’s the last time you’ll see Adrien Brody in a hat. Enjoy it while it lasts. Again, the film is dark and the director uses a lot of tight shots, so it’s hard to get a glimpse of an entire outfit. However, this one was used in some promotional stills, and you can see it’s actually more of a tawny orange color than a brick red as it appears in the film: I’ve searched all over for a production shot of this outfit, but there doesn’t appear to be any. Best as I can tell, it’s a red fabric overlaid with a black dotted net. It looks really lovely, from the fleeting glimpse we get of it when she gives the standing ovation. I had to boost the contrast waaaaaay up in order to see any of the detail. If this was a custom dress for the film and I were the costumer, I’d be really sad that it spent the whole time in shadows. Easily my favorite dress of Part 1.

This is the dress the director shows off the most and it is by far the weirdest. It reminds me so much of this:

But shockingly, it appears to either be this vintage gown or based on one like it:

So this scene takes place on the Houdinis’ 10th wedding anniversary, which would have made it 1908. This dress is really more reminiscent of the 1920s robe de style, so you do the math. That said, it is awfully cute. She looks like a sad little ballerina! Poor thing! Why does your husband have to be such a fame-whore?

Again, she’s sitting down and behind a freaking table so you can’t see much of the outfit. What is up with that? Was the actress pregnant or something? Anyway, I’d love to see this coat in more detail. Hell, I’m thinking of even trying to reproduce it, except for the fact that there’s no need for such a heavy wool coat in my neck of the woods, where it barely gets below 45° F in the deepest, darkest part of winter.

Houdini’s mother (played by Hungarian actress Eszter Ónodi) gets a grand reception in Budapest to make up for “marrying beneath herself” to Houdini’s father. Houdini picks the dress out for her in a shop window. It’s a nice dress, but a tad old-fashioned for 1908-ish. This one is right up Kendra’s alley. Lady Butler is a red-head, and she’s wearing a fabulous green corset and camisole.

Just a collection of some of the many vaudeville costumes worn by extras and Kristen Connolly. I particularly wish those playing card/jester outfits had more screen time.

Anyway, that about does it for Part 1 … Stay tuned for Part 2!