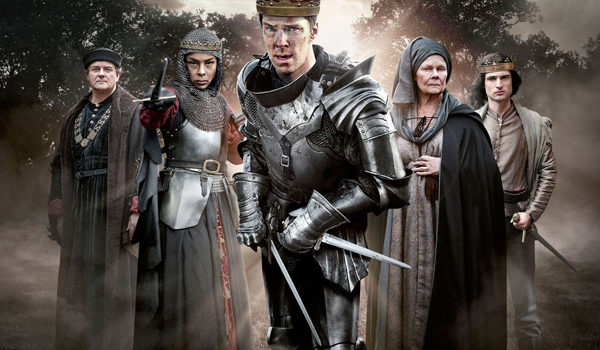 Seems like ages ago we first discussed Benedict Cumberbatch being cast as Richard III for the BBC’s Shakespeare cycle titled The Hollow Crown: The Wars of the Roses. This TV miniseries encompasses the plays Henry VI, Part I, Part II, and Part II, and Richard III, and premiered in 2016. It followed an earlier series that covered the plays Richard II, Henry IV, Part I and Part II, and Henry V in 2012, featuring Tom Hiddleston as Prince Hal, among others. Somehow, I totally missed any airing of the first cycle of The Hollow Crown on PBS (and I couldn’t find it streaming), but hey, I know the Shakespeare so it wasn’t hard to pick up with the second cycle when it aired on PBS last Christmas.

The first episode, Henry VI, Part I, actually covers most of the first two plays, while Henry VI, Part II has the plot of Part III. Then Richard is just Richard, duh. This works out pretty well, since everyone can agree that VI is one of Shakespeare’s weakest plays, but the story serves as a good setup for Richard, and this screenplay does an excellent job of giving the Wars of the Roses context and depth without dragging you down in too many details. The pacing is just about perfect, with the action and dialog moving at a smooth clip, keeping all the juicy political bits and adding just enough battles to be appealing to those who might be bored by talking, I guess. This is one dark, gritty Shakespeare, with mud and stringy hair and gloomy stone castles, while also not being stripped-down and stark. The big court scenes, in particular, have a unique balance between lush, shiny “costume drama” and “modern elegance” that says, to me, that the director was making a point of not being too old-school Lawrence Olivier, but also wanted to be faithful to the historical story and language. I think this production rides that balance well. Henry VI may be one of England’s lamer kings, but OMG Tom Sturridge is smolderingly hot. Hugh Bonneville is an awesome Duke of Gloucester, and lookit those super-cool swirling robes. The Queen criticizes Eleanor, Duchess of Gloucester (played by Sally Hawkins), for wearing fancier dresses than royalty, and yep, these gowns and headdresses are perfect for the role. Whoever sourced the fabrics for this production found some winners. Also, lovely period jewelry. She’s wearing this outfit when the Queen picks a very entertaining bitchfight. Not flashy, but I looked carefully at all these scenes with laced-up garments and didn’t see a metal grommet anywhere. A+ She doesn’t deserve him. *sigh*

The first two episodes, Henry VI, Part I and Henry VI, Part II, are dominated by Margaret of Anjou / Queen Margaret. Taken prisoner by the Duke of Somerset, who then becomes her lover, she reluctantly marries King Henry and dominates him all the while. Henry is mild, meek, bookish, and totally dependent on his councillor the Duke of Gloucester. In this production, that relationship is depicted as quite loving in a father-son fashion, and Gloucester has a doomed nobility that made me root for him and the King over the nefarious Somerset and his crew. Margaret comes of as a shrew from the start — suspicious, grasping, and conspiring, her every line drips with bitchiness. It’s kind of entertaining but I never get a good idea of her motivations. Why does she side with Somerset at the very beginning? He’s not overwhelmingly attractive nor does he deliver his lines with great seduction. He makes no fabulous promises to her. And other than being a little wishy-washy, Henry isn’t so terrible; after all, they have a son, and this show doesn’t make a particular point that Ned could be Somerset’s child. The best use of Margaret is keeping her in the Richard III episode, where she’s often kept out (Shakespeare deviated from history there). She harangues and curses Richard something fierce. Margaret of Anjou (played by Sophie Okonedo) is one of Shakespeare’s nastier queens, and this production really emphasizes her back-stabbing actions. Something about this gown doesn’t thrill me (is it the fabric? the cut? not sure), but the hair / headgear is quite well done. Somebody needs a hug! Joan of Arc’s brief appearance (as portrayed by Laura Frances-Morgan) is gut-wrenching and felt, well, particularly relevant to today. However, I’m ambivalent about putting Queen Margaret in armor and making her an active combatant. Yes, Shakespeare puts the ‘she-wolf’ at the battle but historically, it’s highly unlikely that she’d be in armor, wielding a sword with the foot soldiers. That just feels too modern to me. C’mon, the English just burned Joan at the stake for doing it! Benedict Cumberbatch’s Richard III is a complete and total villain. He’s a slimy, sleazy, nasty, utterly unredeemable jerk. On screen, it looks like the actor is reveling in how awful the character is, which is a bit OTT compared to other performances of this role. Elizabeth with Cecily, Duchess of York (the always fabulous Judi Dench, who has a killer scene with Richard/Cumberbatch), and Phoebe Fox as Anne Neville. He’s quite a good fighter for a hunchback!

Have you seen any of The Hollow Crown series?