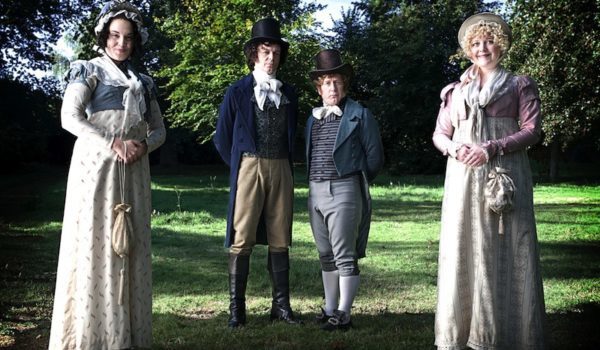 We know you’re waiting for the latest Outlander recap and podcast! Your bloggers have been distracted by attending a costume event AT VERSAILLES, so expect that post & podcast tomorrow (Wednesday!). In the meantime…

This isn’t strictly costume-related, but if you’re into historical costume, and you spend a lot of time watching historical films and TV shows, I think it’ll be relevant. To me, there isn’t much that’s funnier than historical humor. Sure, I like a witty Jane Austen adaptation as much as the rest of them, but if someone is going to REALLY poke fun at history? And do it well? I’m in! We’ve covered some historical comedies before, including Monty Python, Blackadder, and Another Period. But there are also some great British sketch comedy shows that often have a historical focus. Here’s some of my faves!

The basic idea is a modern psychiatrist has therapy sessions with women from history. Sometimes it’s the therapist (Rebecca Front) who makes me laugh the most, but these three sketches are pretty damn genius. You can find many more on YouTube.

Who knew Mary Queen of Scots could cut a bitch? (NSFW for swearing)

I can’t explain why this makes me howl, but it does!

You can’t resist her dance!

Watson & Oliver is a British sketch comedy show led by two actresses, Lorna Watson and Ingrid Oliver. Most of their sketches are modern, but they have a running series that is a spoof on the Regency era. The Regency sketch from series 1, episode 1 is funnier, but sadly not available online.

Oh, David Mitchell & Robert Webb — two British comics who make me cry I’m laughing so hard. They’ve had a series of sketch shows, including The Mitchell and Webb Situation and That Mitchell and Webb Look. And the two actors starred in the hilarious (modern-set) comic series Peep Show. They’ve got a gazillion historical sketches, these are just my highlights.

It’s all about perspective, isn’t it?

Who is responsible for some clunker names for “new” lands? Oh right. The captain.

Any fan of Pride and Prejudice should enjoy this take on Mr. Darcy, Caroline, and Elizabeth. (NSFW for swearing)

Queen Victoria tells it like it is. (NSFW for naughty references)

What’s your favorite historical comedy sketches? Link to them in the comments!