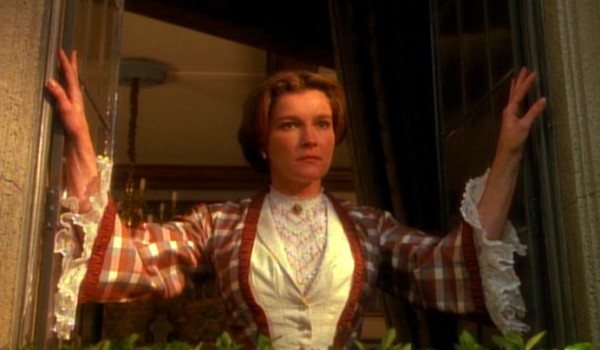 Sometimes historical costuming takes you by surprise. You’re there watching one of your favorite science-fiction space dramas when all of a sudden, out of nowhere, there’s historical clothing on your TV screen. And sometimes, those surprise historical costumes are actually really quite good. A perfect example of this is what happens in Star Trek: Voyager episodes “Cathexis,” “Learning Curve,” and “Persistence of Vision.” These three episodes depict Captain Janeway’s holo-novel, “Janeway Lambda One,” which is set in “Ancient England” (i.e., the 24th-century conception of 1840-50ish England) and is basically Jane Eyre as far as plot goes. Voyager costumer Robert Blackman oversaw the costumes for the entire Star Trek franchise in the late ’80s and through the ’90s.

In an interview with StarTrek.com, Blackman mentions his reluctance to interview for the costume designer position on Star Trek: The Next Generation, stating:

I spent 20 years on the 19th century, why in the heck would I want to try to figure out what the 24th century is about? I’m not a futurist — I don’t have any sense of the stuff. I deal with present to past.

And it’s obvious in these three episodes that feature “Janeway Lambda One,” that he feels very much at home in the 19th century. However, since these three episodes aren’t some of the most popular Star Trek Voyager episodes, I’ve been unable to turn up any information on whether or not the costumes were designed and made by Blackman’s team or if they were pulled from Paramount’s stock.

Let’s take a look at the characters, starting with the Captain’s character Lucille “Lucy” Davenport, the new governess for the noble Burleigh family. Her gown consists of a plaid jacket and skirt, over a cream-colored waistcoat. The jacket is trimmed in dark red ruched velvet. 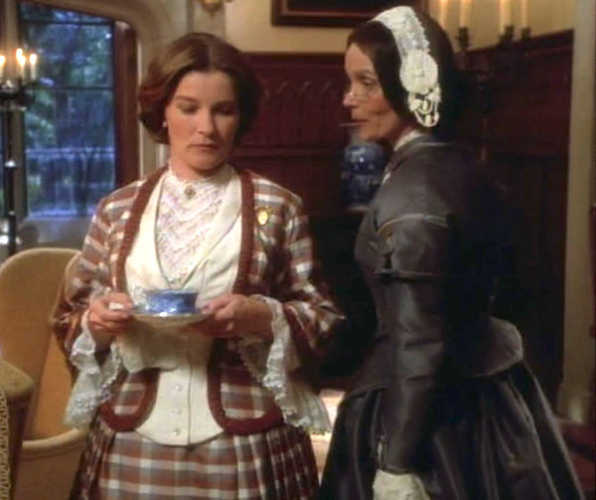 The Netflix streaming copy of this episode isn’t that great, but I’m pretty sure Janeway’s dress is taffeta, possibly silk. 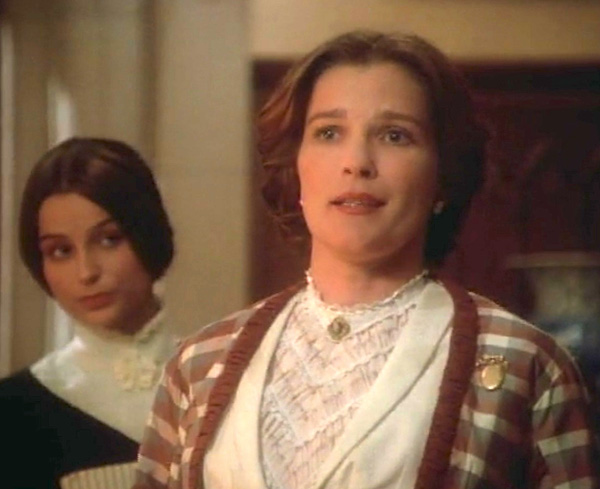 I love the maid’s outfit and hair, but you barely catch a glimpse of her in the episode. Also, note the attention to detail in Janeway’s blouse and the little locket pin on her left breast. 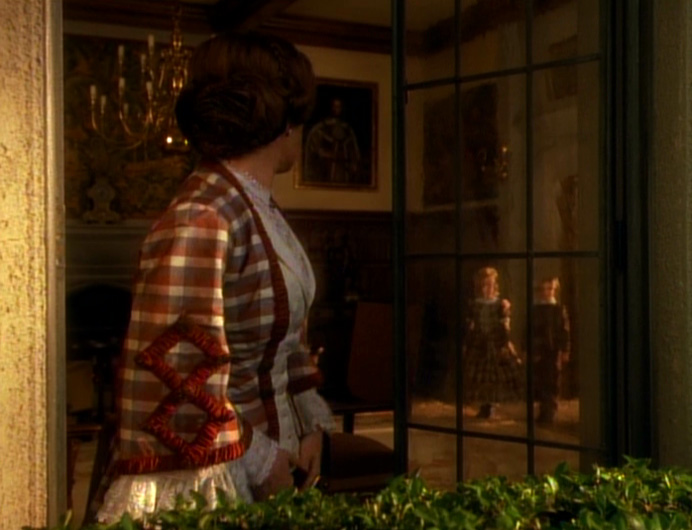 Note the buttons at the points of the double diamond pattern design on her sleeves. 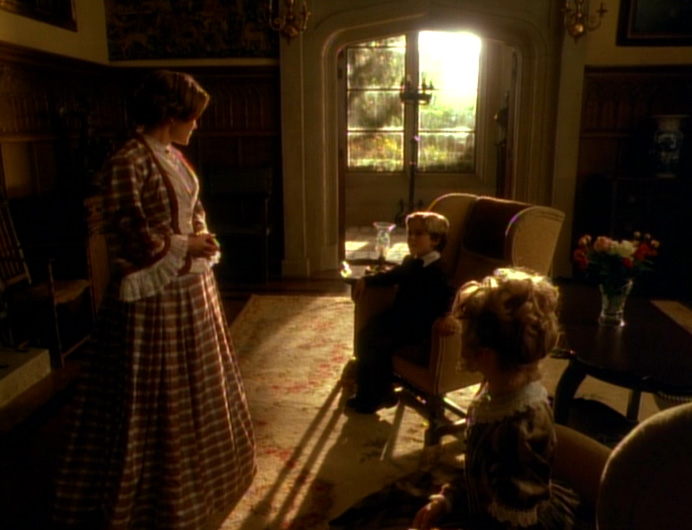 She’s not wearing a crinoline under her skirts. This was probably due to space restrictions on set (the Burleigh set is pretty cramped) as almost all of the shots are close-ups or from the waist-up.

Janeway’s costume is not a direct reproduction of any particular gown or fashion plate, but it has elements of several early 1850s day dresses that I’ve run across in my research. The most strikingly similar is the orange gown on the right of this fashion plate, showing the same jacket and waistcoat arrangement: 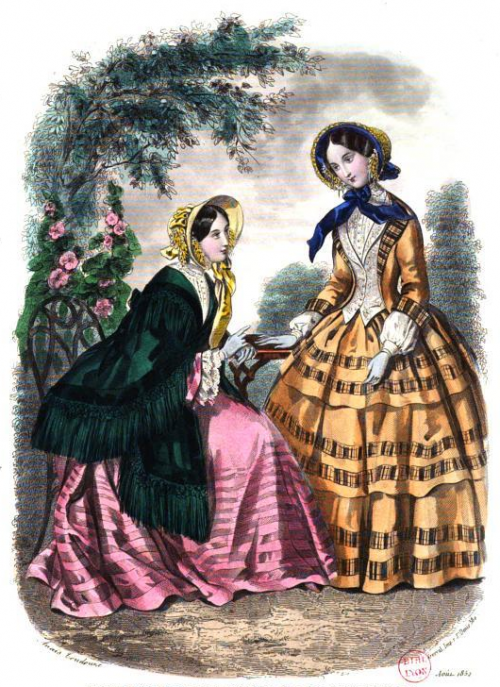 Another example of a similar style is this blue plaid gown from 1850, showing ruched trim on the edges of the jacket and lace engageants: 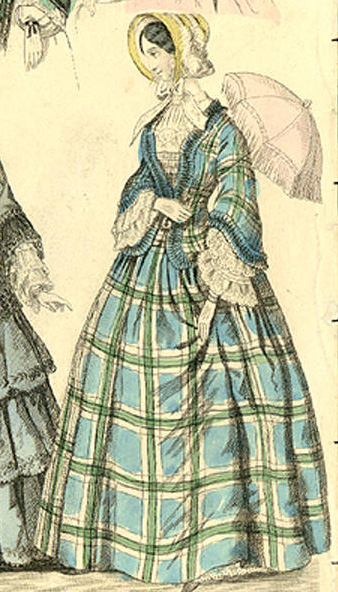 Next up is Mrs. Templeton, the menacing housekeeper who is threatened by Lucy’s arrival in the Burliegh home. Here the contrast between the decades in Janeway’s 1850s gown and Mrs. Davenport’s 1840s gown makes sense — Mrs.Templeton is older, conservative, set in her ways. Lucy is younger and more fashionable.

Still, I think Mrs. Templeton’s gown is by far the best, both in terms of general styling, as well as in the tailoring. I spent an inordinate amount of time trying to find clearer full length images of Mrs. Templeton on the Internet, but no luck. The dress is really pretty, and honestly, if you copied it literally, you could probably waltz into Dickens Fair and pass for one of the actors. I’m having a hard time believing that this gown was made specifically for this run of episodes, but to my knowledge, I’ve never seen it pop up again in another film. So either it was rented from an amazing kick-ass costumer, or it was made by the Star Trek Voyager costume elves and then put into storage never to be seen again. 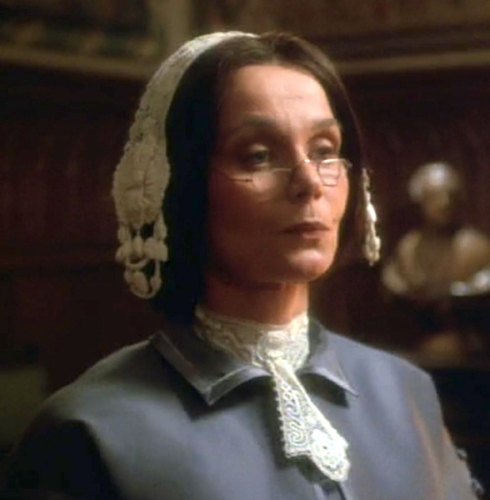 That right there is pretty much the platonic ideal of bound edges. SO FLAT AND THE CORNERS ARE SO CRISP. *bites fist* 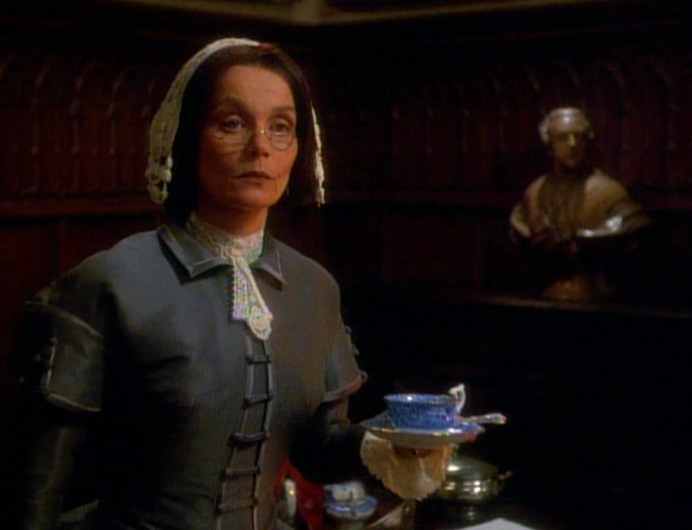 “Tea? Bitchface? Why not both?” 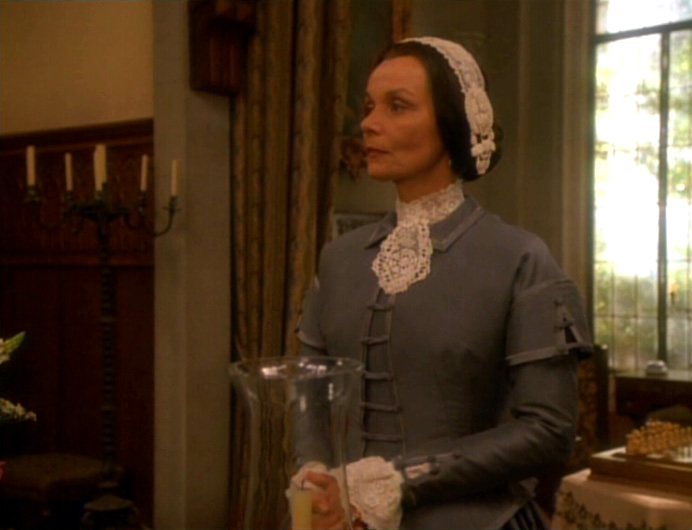 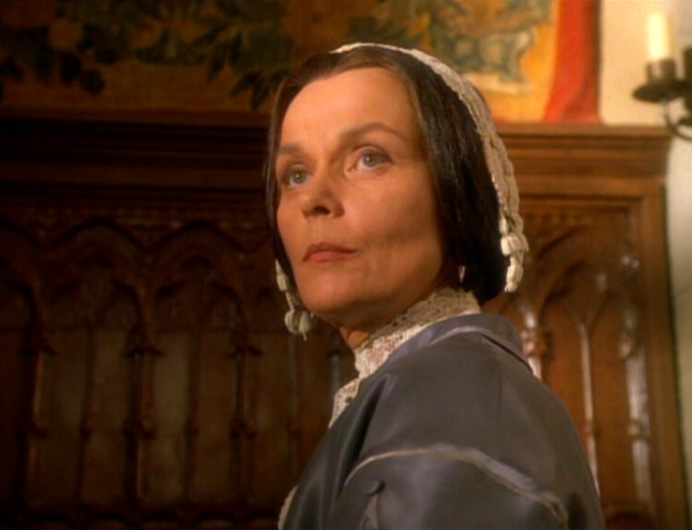 Definitely silk taffeta bound in silk satin. Whoever made this was amazingly good. 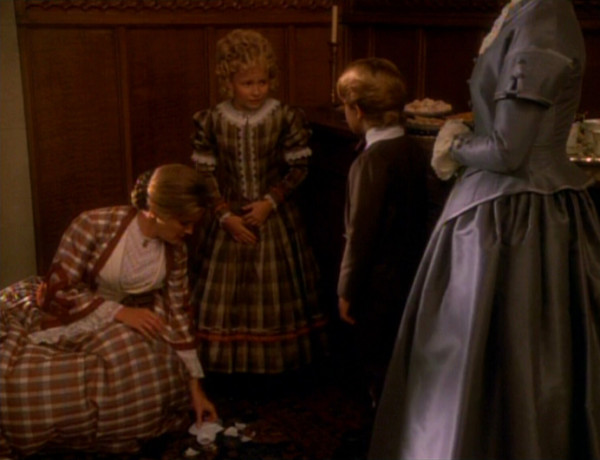 The best I could come up with as far as a full-length shot of the dress goes.

Like Lucy’s outfit, I don’t think Mrs. Templeton’s dress is based on any one extant piece or fashion plate, but it certainly references key elements of late-1840s fashion. 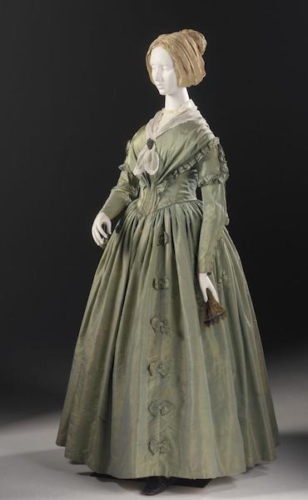 The short cap sleeve over a long, tightly fitted undersleeve of the same fabric shows up frequently in the late-1840s. 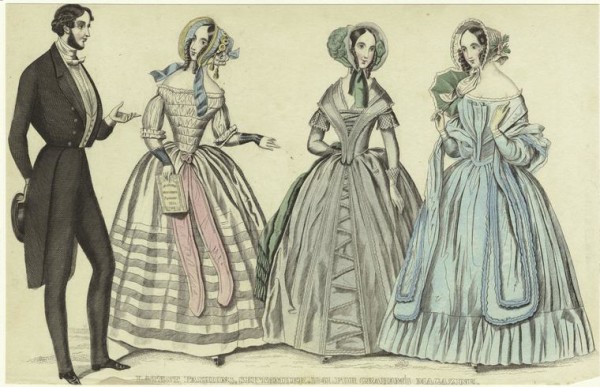 Self fabric used as piping or binding was also a popular method of decorating gowns during this era. Graham’s, 1841.

The one adult male character in the holo-novel, Lord Burleigh, also has a nice 1850s outfit: 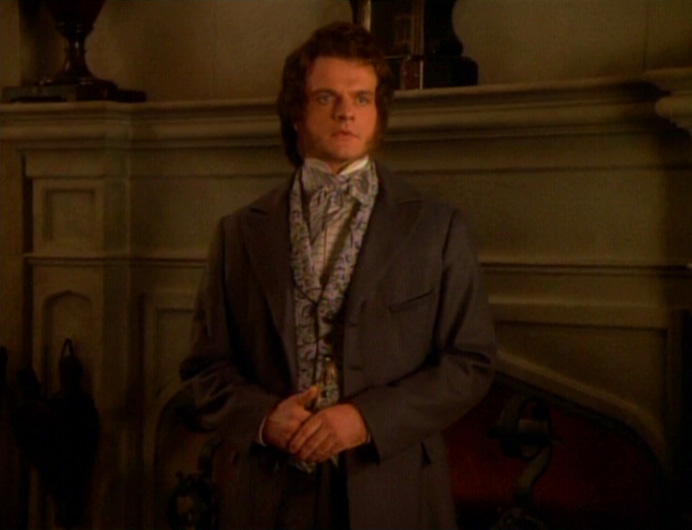 Unfortunately, I don’t have much to say about it. 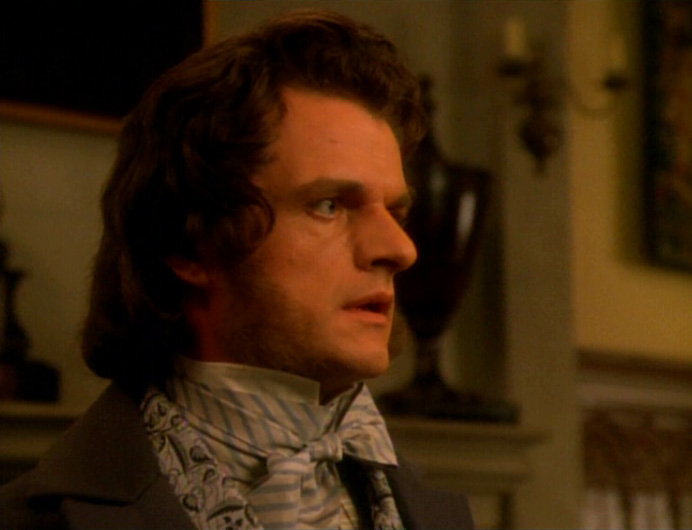 Well, other than that’s a demmed fine cravat!

I know there’s a lot of you costume-obsessed people who are also Star Trek-obsessed, so if anyone has more info on the costumes depicted in Janeway’s holonovel, I’d love to hear about it!

Has a TV show surprised you with historical costumes? Tell us about it in the comments!