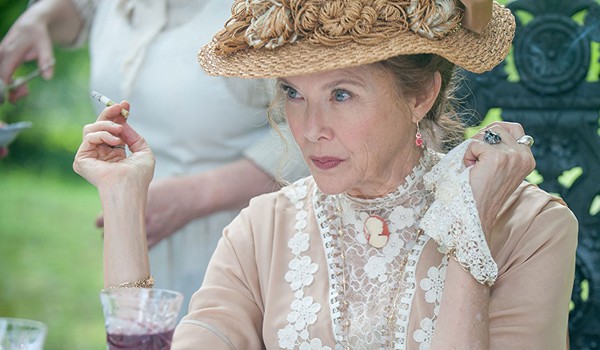 We’re always trying to track what historical costume movies and TV shows are coming up. Alas, not a lot is on deck for the next few months, and nothing at all historical is set for summer 2018 release that we know of. So we’ll have to make do with these few trailers, sorted by American release date. As always, you can keep an eye on what’s forthcoming on our Upcoming Movies page!

I’m on record as not needing this remake, but nobody asked me, and it’s already aired in the U.K. and is headed to Starz in the U.S. We may hold our noses and review it.

This adaption of a Chekhov play set in the 1900s has been getting a lot of buzz because it stars Saoirse Ronan and Elisabeth Moss who are currently hot in Hollywood.

Yet another remake, this also aired in the U.K. already, and will now show on PBS in the states. We mocked the flyaway tresses during Snark Week, but otherwise it seems like a decent adaption.

I guess this counts as a period flick, it looks kind of 1930s and the costumes are by Oscar-winner Jenny Beavan. Sentimental as hell, with the A.A. Milne character all grown up and re-meeting his childhood bear.

Troy: Fall of a City

This BBC production aired in the U.K. last month and is planned to hit Netflix in the U.S. sometime this year. As the title indicates, it’s a fictional account of the fall of Troy.

This WWII-set film (based on a book of the same name) stars Lily James, Jessica Brown Findlay, and Matthew Goode, all from Downton Abbey. There’s an April U.K. premiere date but nothing for the U.S. yet.

This biopic of Thomas Edison (starring Benedict Cumberbatch) got shelved late last year because of the Harvey Weinstein scandal, though it had been previewed at some festivals. Maybe the film will see the light of day this year…

What historical costume movies or TV series are you looking forward to? Have you heard of anything upcoming that we missed here?