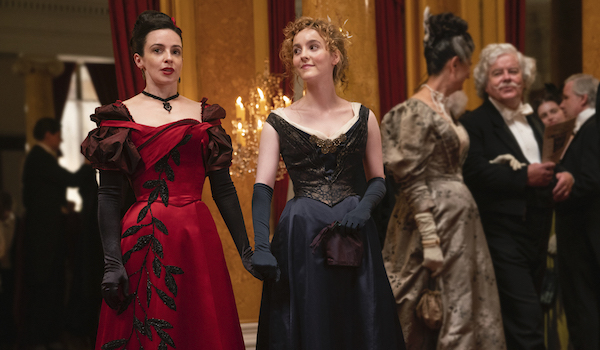 Biopic of the jazz singer focusing on her legal troubles in the 1940s. Costumes by Paolo Nieddu.

March 2: The World to Come

March 26 on Netflix: The Irregulars

Set in Victorian London, the series follows a gang of troubled street teens who are manipulated into solving crimes for the sinister Doctor Watson and his mysterious business partner, the elusive Sherlock Holmes. Costumes by Edward K. Gibbon.

“UK, Aug. 15, 1939: 17 days before WWII, an English teacher and his camera disappear on a coastal boarding school with 20 German teen girls. Miller gets the job 6 days later, secretly trying to find out what happened” (IMDB). Costumes by Lucinda Wright.

The story of Crown Princess Märtha who fought for her country — Norway — and her marriage during the tragic events of World War II. Costumes by Karen Fabritius Gram.

April 11 on HBO: The Nevers

TV series about a gang of Victorian women “who find themselves with unusual abilities, relentless enemies, and a mission that might change the world.” Costumes by Michele Clapton & Jane Petrie.

The lives of two sisters living in France are torn apart at the onset of World War II.

Films/Series with No US Release Date

About the relationship between Karen Blixen (author of Out of Africa) and poet Thorkild Bjørnvig in the 1940s.

“Paris, France, 1899. The corpse of an unknown woman is found in the river Seine. The investigation will push a young ambitious inspector to discover a heavy state secret” (IMDB). Costumes by Anaïs Romand.

“A young woman named Cora makes an amazing discovery during her attempt to break free from slavery in the deep south.” Costumes by Caroline Eselin.

Which of these historical costume films and TV series are you most excited about?