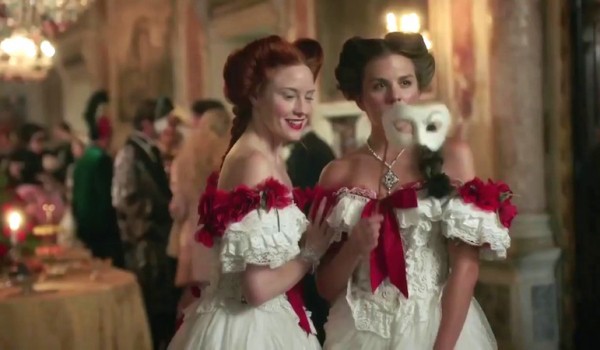 We’re always trying to track what historical costume movies and TV shows are coming up. Spring was thin, but while summer isn’t exactly Historical Costume Drama season, there’s a ton of trailers out for summer, fall, and beyond. As always, you can keep an eye on what’s forthcoming on our Upcoming Movies page!

Circa 1870, Samuel Alabaster, an affluent pioneer, ventures across the American frontier to marry the love of his life, Penelope.

In the 1890s, Catherine Weldon (Jessica Chastain) travels to paint Sitting Bull’s portrait and gets involved in the Lakota struggle over land rights.

Two characters from the original Bletchley Circle series travel to 1956 America and join forces with two U.S. codebreakers to tackle a string of murder cases.

A writer (Lily James) forms an unexpected bond with the residents of Guernsey Island in the aftermath of World War II when she decides to write a book about their experiences during the war.

Spooky story set in an English mansion in 1948, adapted from a Sarah Waters (Tipping the Velvet, Fingersmith) novel.

Yet another “gritty” reboot with WTF costumes.

Jake Gyllenhaal and Benedict Cumberbatch as “Electricity titans Thomas Edison and George Westinghouse compete to create a sustainable system and market it to the American people.” It’s been on hold due to the whole Weinstein company crisis.

A blind pianist living in 18th-century Vienna forms an extraordinary relationship with the physician who is trying to restore her sight.

A woman moves to live with her new husband in 17th-century Amsterdam, but soon discovers that not everything is what it seems. Starring Romola Garai; costumes by Joanna Eatwell.

A new adaptation of the Thackeray classic.

Which of these are you most excited for?