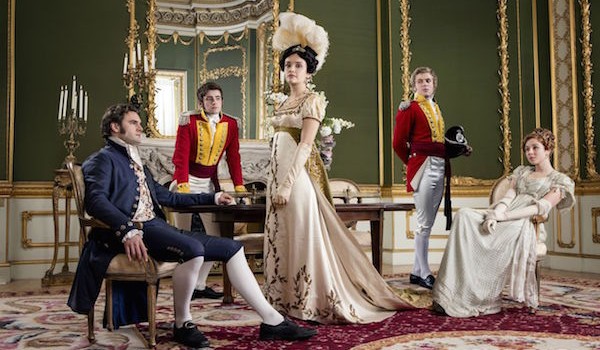 We’re always trying to track what historical costume movies and TV shows are coming up. We’ve got the fall/winter trailer deluge upon us, so there’s all sorts of eye candy! As always, you can keep an eye on what’s forthcoming on our Upcoming Movies page!

The final season! Looks like nobody ages, and we’re never going to get historically accurate wigs, sigh.

American colonies, here we come! This is the last season to be costume designed by Terry Dresbach.

Scotland’s Robert the Bruce. Apparently we get to see Chris Pine’s willy.

Fantastic Beasts and Where to Find Them 2

Because we need another one? The costumes look like modern WTFery.

Late 17th century, Queen Anne of England, Rachel Weisz and Emma Stone, costumes by Sandy Powell. I will be ALL OVER THIS.

Saoirse Ronan as Mary, Margot Robbie as Elizabeth, a whole lot of shitty costumes by Alexandra Byrne. Trystan and I are already plotting a podcast. Expect ranting.

The 1819 Peterloo massacre, in which British troops fired on peaceful protesters. Costumes by Jacqueline Durran.

Someday this Benedict Cumberbatch/Thomas Edison movie will get released? Maybe? It could happen?

A blind pianist in 18th-century Vienna.

One Nation, One King aka Un Peuple et Son Roi

The French Revolution from the people’s point of view. Costumes by Anaïs Romand.

A British TV miniseries (which aired in the U.K. already) with costumes by Lucinda Wright.

The love affair between authors Vita Sackville-West and Virginia Woolf.

Yet another adaptation of Wilkie Collins’ classic gothic novel (which played in the U.K. already).

Which historical costume movie or TV trailer has you most excited?