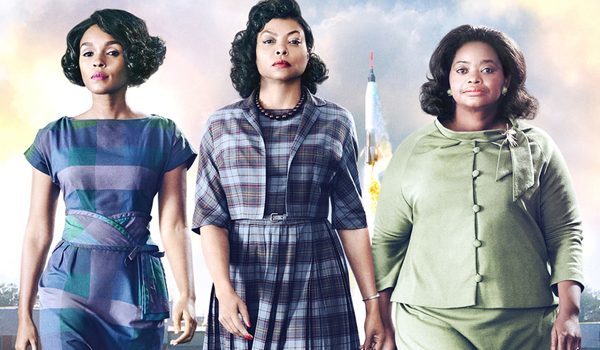 I’m pretty sure most people in the U.S. have heard about Hidden Figures (2016) already, and I wasn’t intending to review it for Frock Flicks yet because it’s set in 1961 and, more importantly, it’s currently in the theaters, so I assumed I wouldn’t see it until the movie was available for streaming. But then I was stuck in New York City during a snowstorm that shut down everything — all the museums, all the stores except Macy’s, most of the restaurants — and my AirBnB apartment didn’t have Netflix, but a movie theater nearby was open, so my husband and I braved the blizzard to see Hidden Figures and not entirely waste the day. It was totally worth it, plus you get a blog post out if it all! 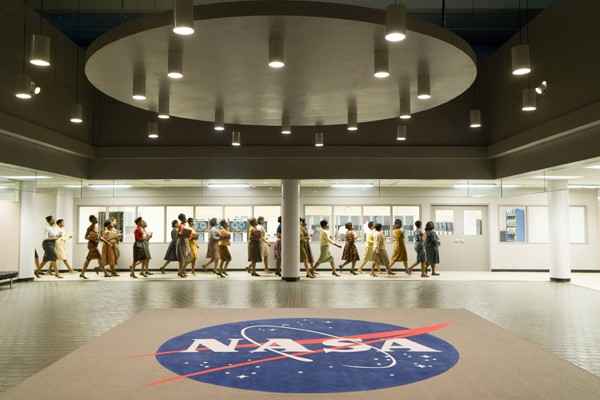 The film explores the little-known contribution of African-American women at NASA as human computers who calculated flight trajectories for early space missions, and it’s based on the nonfiction book, Hidden Figures: The Story of the African-American Women Who Helped Win the Space Race by Margot Lee Shetterly. The story focuses on Katherine Goble Johnson (portrayed by Taraji P. Henson), Dorothy Vaughan (Octavia Spencer), and Mary Jackson (Janelle Monáe) and the Friendship 7 launch with John Glenn. 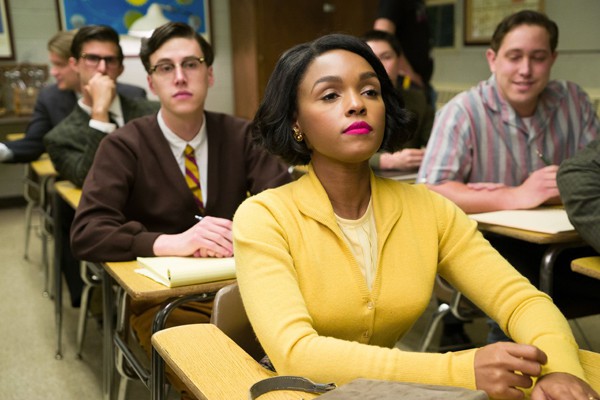 For the movie adaption, abbreviations were made to the historical timeline and some real people were cut or characters were conglomerated. Several articles have discussed the differences between the strict historical facts and the movie — our friend An Historian Goes to the Movies gives an excellent rundown.

NASA’s chief historian Bill Barry was an advisor to the film and noted on Space.com:

“Like anything based on real-life events, there are some temporal things that, as a historian, are like, ‘eh, that didn’t really happen like that,’ but I think that the movie is true to the stories of the main characters. On the whole I was very happy with the outcome.”

And as Katherine Johnson herself said: “If you get even one little girl interested in math and science, then I think the movie accomplishes its feat.” This is definitely an inspirational film, showing women of color using their brainpower to succeed against all odds. 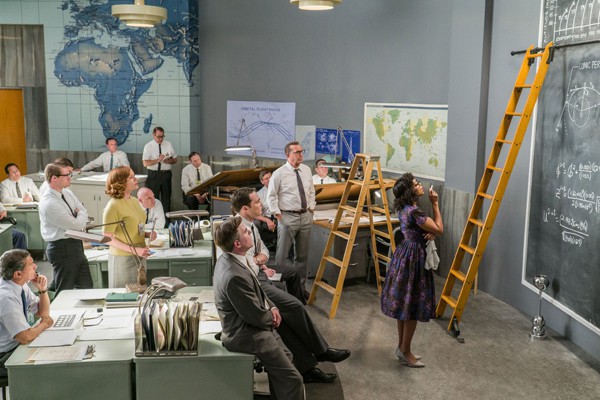 For a film that’s basically about math equations, there are a few scenes where clothing plays an important role. Early on, Mary Jackson walks through a wind-test tunnel and the skinny high heel of her shoe gets stuck in the floor’s grating. The fan starts up to blast the space capsule with air for the test as Mary struggles to pull her shoe out of the grate. An engineer yells at her “No shoe is worth your life!” and she slips out of the shoe and runs out of the room. Shoes are a focal point again when Katherine Johnson has to run nearly half a mile between buildings to use the colored women’s restroom. 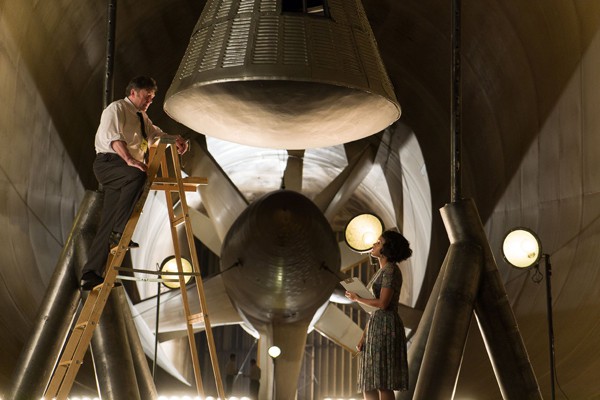 It’s all part of the conservative uniform required for the NASA offices in 1961, where the women are told to wear ‘skirts below the knee, high heels, and no jewelry except a simple pearl necklace’ (and Katherine complains that the colored women aren’t paid enough to afford pearls). Still, costume designer Renee Ehrlich Kalfus was very thoughtful in her choices to highlight the characters’ personalities and evoke the historical period. 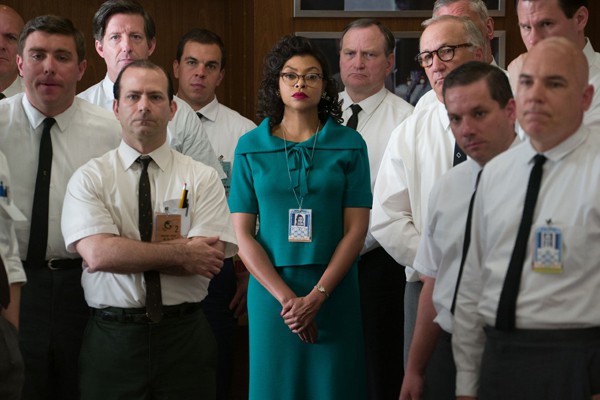 Most notable is how the African-American women wear more rich, bright colors than any other characters in the film so they stand out against the sea of men in white shirts and the few white women in neutral tones. Kalfus explained to the Hollywood Reporter:

“We saw a lot of images of this space test group room and they’re all in this one shirt and I said, ‘Let’s put them all in gray jackets and make it really monochromatic.’ Because the women were in a whole other area of NASA, they were not near anybody, and they were segregated from one another. So when she [Katherine] does come in, she’s just this pop of color. It was the way we wanted to tell the story. We had discussions about that NASA room being monochromatic, and that outside of it, it would be warmer and more textural. I remember someone saying ‘Oh my gosh, she’s like my jewel in this room’ because the men were practically in uniform. They were all the same. That was a filmmaker choice.”

Creating an historically accurate look began with proper foundation garments, and the women did wear vintage dead-stock girdles and reproduction bras. Kalfus told Where to Watch:

“This is a time in America when all the women wore girdles. I noticed how the posture changed when all these extras walked by in their heels and stockings and girdles. I’m not saying you’re going to want to wear a girdle ten hours a day, but it really does help turn back the clock and allows actors to imagine themselves in another time.” 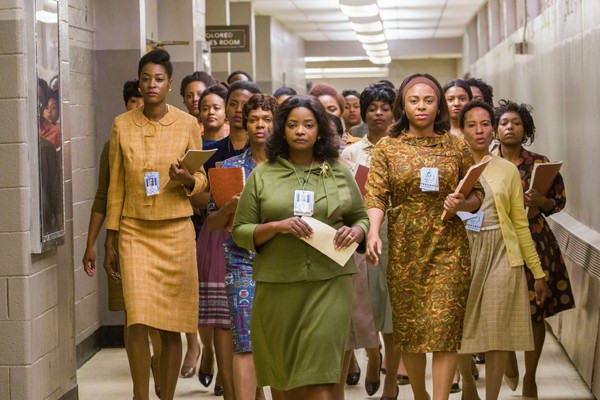 Kalfus and her team custom-made most of Octavia Spencer’s polished suits and about 90% of Taraji P. Henson’s colorful dresses. For Janelle Monáe, whose character was more of a renegade, Kalfus sourced vintage dead-stock pieces, including pants. 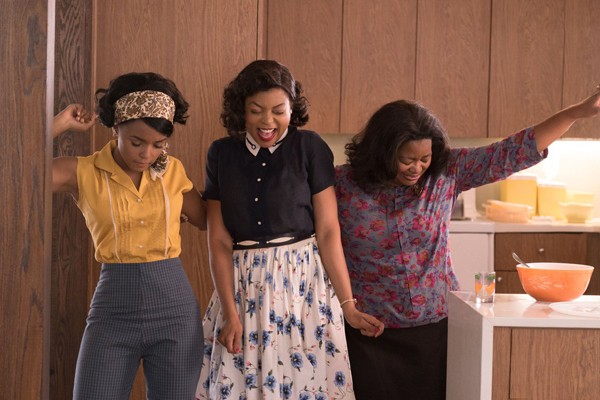 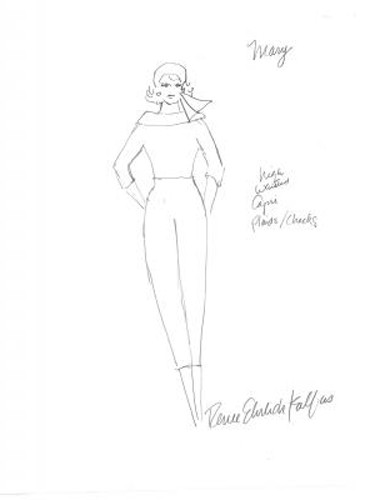 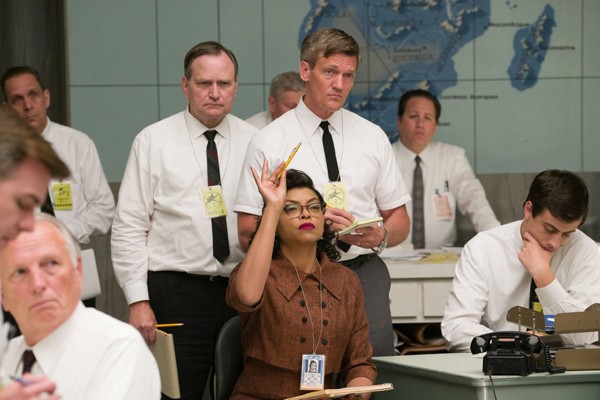 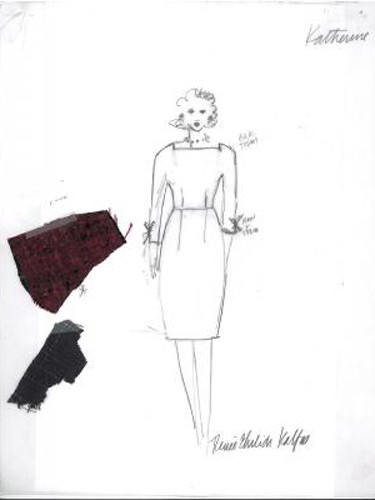 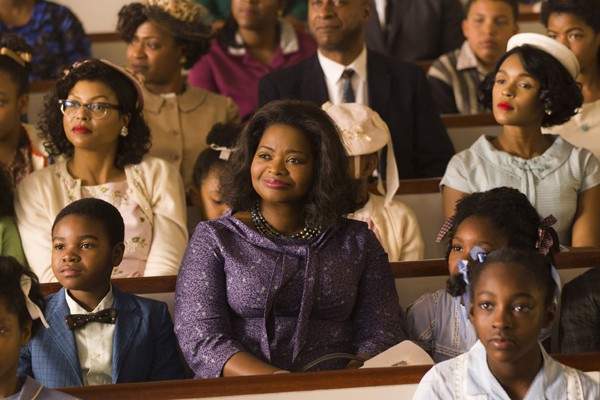 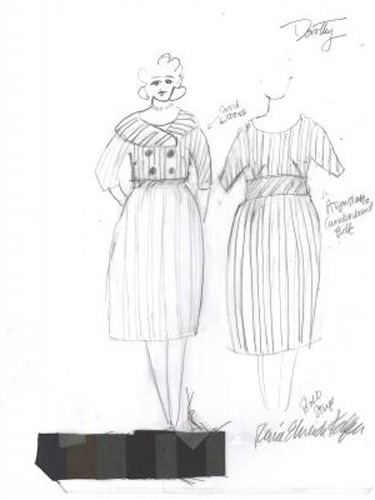 These details paid off, for as Kalfus told Fashionista:

“They brought the movie down to the real Katherine G. Johnson, who’s 98 years old, and she walked out and says, ‘I wore those clothes!’ That was a high compliment that she felt that she saw herself up on the screen, which was wonderful. That’s sweet, right?” 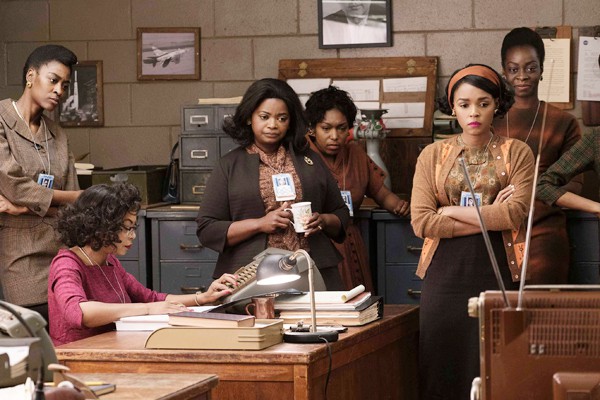 Have you seen Hidden Figures in the theater yet?