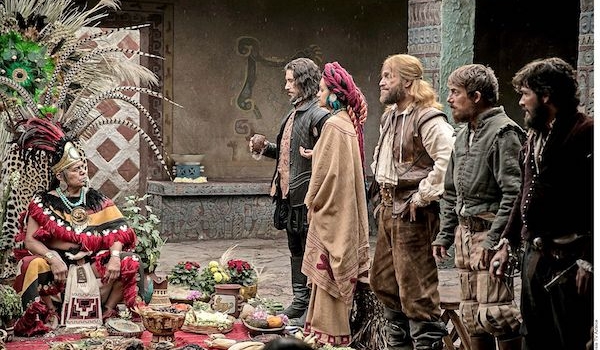 As we’ve discussed before, us Frock Flickers are generally focused on the “girlie” side of historical movies. But we all have some less obvious historical periods and places we’re interested in, and one of mine is Mesoamerica (i.e. pre-contact Mexico and Central America; I’m also interested in the contact era). I’ve been down some rabbit holes the past few months with documentaries, podcasts, and books about the Maya and Aztec cultures as well as the 16th century Spanish conquest of this area, so I’ve been wanting to watch Amazon’s new miniseries Hernán (2019) about Spanish conquistador Hernán Cortés, indigenous translator Dońa Marina/La Malinche, and Aztec King Moctezuma II, among others. The show had a LOT of money thrown at it, including special effects by the company that did effects for Game of Thrones, and the topic is one I find fascinating. So I was super annoyed to discover that Amazon has only released it for streaming everywhere except the United States! After waiting for over a year, I finally managed to find a pirate-y site where I was able to watch it (tip: Google “Hernan Amazon English subtitles,” although make sure your antivirus software is up to date).

I gotta say, there are some problems with the series, which I’ll discuss in a moment … but aside from these, this series GETS IT RIGHT. Like, they actually show the events as they really unfolded, and seem to mostly hit the important parts! We see not only the Spanish lust for gold, but also how they used indigenous tribal divisions to pit various city-states/tribes against each other. We see how Marina needed to look out for number one, given she’d spent most of her life as a slave. We get some ideas about 16th century Mexican and Aztec culture and ways of life, and how they interpreted and understood the new people in their land. We see just how developed — physically and culturally — the capital city of Tenochtitlan was, and seeing some of its most interesting aspects (like the causeways that connected this city in the middle of a lake with the mainland) as they might have looked was really fascinating. Entering the city on one of its causeways.

The first season only goes up through La Noche Triste, in which the Spanish and their allies were driven out of the Aztec capital of Tenochtitlan; there is supposed to be a season 2, which I really hope happens, as there’s lots more fascinating events leading up to the fall of Tenochtitlan and the Aztec Empire.

Of course, there’s definitely some problems, which seems inevitable. First, each episode moves through the overall storyline but focuses in on one particular character. While it’s great that at least three (four?) of the eight focus on indigenous characters, we only get real backstories on the Spanish characters. You do get some senses of Mexica culture in this period, but it would be even more interesting to see it not under the stress of the Spanish arrival. Of course, telling the “white conquistador” story has been done; many viewers have complained that telling indigenous stories is long past overdue. And, some of those Spanish backstories are semi-ridiculous, most especially Cortés befriending/falling in love with a local Moorish girl in his hometown which is why he Haz a Sad. Teenage Hernán has boy band hair and WAY TOO MANY STRAPS AND BUCKLES on his clothes. There’s the usual problem of not enough extras, which always bugs me, especially since they clearly had a special effects budget — we can’t flesh things out that way? It makes certain key points less clear, like just how many people lived in Tenochtitlan (20,000-40,000 depending on who is estimating), and just how outnumbered the Spanish were in battles (they were able to win not only because of their stronger weaponry, but also their warhorses and war dogs), and just how bad the Spanish atrocities were (for example, thousands of Mexica were killed at Cholula, and while the show stresses the horror of this event, you get the impression that it’s more like hundreds). Now, fair warning that I know very little about the relevant areas of late 15th/early 16th-century costume, specifically, Spanish menswear and Mexica mens- and womenswear. But with that in mind, let’s discuss the costumes — EDITED TO ADD: which were designed by Mónica Neumaier and Natacha Fernández Gallardo.

The Spanish men tend to wear generic 16th-century costumes that can sometimes be cheesy and sometimes decent. Now, I don’t expect to see them dressed formally out of European portraits, but there are images created by indigenous peoples who were there at the time, and the series costumes look much more “renfaire” than any of these period images: Spanish (including Cortés, right) from the Codex Azcatitlan, 16th- or 17th-century indigenous pictorial manuscript of the conquest of Mexico, via Wikimedia Commons Some of the fabrics scream “upholstery remnants.” Note Cortés’s hair; he actually sports a manbun at one point. I don’t know enough about armor to have anything to say about this, but Cortés apparently doesn’t own a comb and his hair is constantly in “wet look.” I was impressed that Cortés is wearing Actual Shoes, not boots, occasionally, although I feel like he’d put on something with sleeves for meeting the Aztec king for the first time. There’s some good layering, if a WHOLE LOT of metal grommets. The rest of the Spanish characters embraced the “shipwrecked” look, like Pedro de Alvarado here. SO MANY metal grommets. No facial hair was trimmed in the making of this series. This is allegedly Jerónimo de Aguilar, a Franciscan friar who was indeed shipwrecked and lived with the Maya for a number of years before joining Cortés. Okay, so we learned that the Mayas did shave their heads, but I still found his hair to be VERY modern hipster.

For the indigenous peoples, I mostly want to talk about the two main female characters: Marina (VERY well played by Ishbel Bautista) and Luisa (both are the names the Spanish gave them).

From the VERY LITTLE I know, both seem to be relatively well dressed according to my deep research (sarcasm) on Wikipedia, in long, wide blouses and skirts. As the Spanish arrive, Marina is in a skirt and necklace and not much else. Once she starts helping to interpret, she gets clothing that provides more coverage, although it’s basic. As she becomes indispensable to Cortés, Marina’s clothing is made of finer materials with interesting decorations, like this embroidered neckline. LOTS of beautiful details in the clothes. And she isn’t only in natural/off-white colors. Here she’s gone a woven or embroidered band on the chest plus tassels. I do have questions about this hairstyle from a practical perspective. They frequently give her the wrapped braid but also leave most of her hair down, and given the braid’s placement, I feel like she’d have an instant migraine. Luisa is the daughter of a chief, so she’s always dressed well. And finally, there’s one random sub-plot where one of the conquistadors’ Spanish wives (played by Aura Garrido of El ministerio del tiempo) shows up in Tenochtitlan and is HIGHLY ANNOYING, both in her pseudo 16th-century dress, wispy messy hair, and doing the whole plucky “I can take care of myself!” thing and proving that she can’t, actually. Come on, Amazon! Release Hernán in the U.S.!