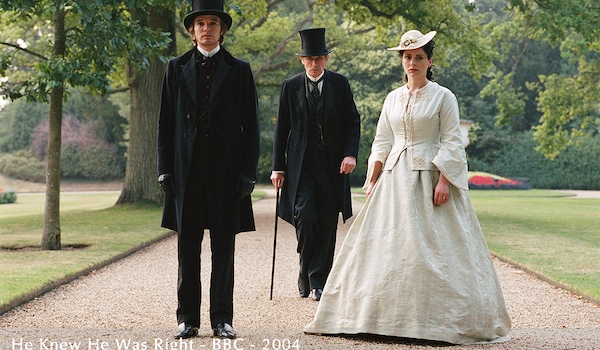 I had been eagerly awaiting this miniseries, as it is another adaptation by the talented writer Andrew Davies (1995 Pride and Prejudice) of an Anthony Trollope (The Way We Live Now) novel. But I have to say, I was really disappointed.

First: the costumes are very nice mid-1860s, although it seems to have been perpetual summer as everyone wanders around in very sheer cotton dresses. Down side? I am SO bored by the 1860s I couldn’t even begin to describe.

The lead actresses are quite good. Down side? The lead actor (who plays Louis) may have done a good job or not — who knows, I hated his character so much I was rooting for him to die (in a literary sense!) so we could Move The *$!K On.

You could tell that this story is MUCH longer and more complicated than they had time for — as it is, it all felt very rushed and skipped around a lot. Oh, the plot? Right. Louis marries Emily, all is well, until her godfather (a known rake) starts visiting. A lot. Louis worries about what people will think and then later, whether Emily has done anything wrong. He’s obstinate, she’s obstinate, they separate, he goes insane and goes from vaguely unattractive to REALLY unattractive. There’s two nice subplots (Emily’s sister falls in love with someone her parents don’t think is rich enough for her, and an only tangentially connected story about a poor relation who also falls in love), altho they aren’t extensive enough to outweigh the main plot.