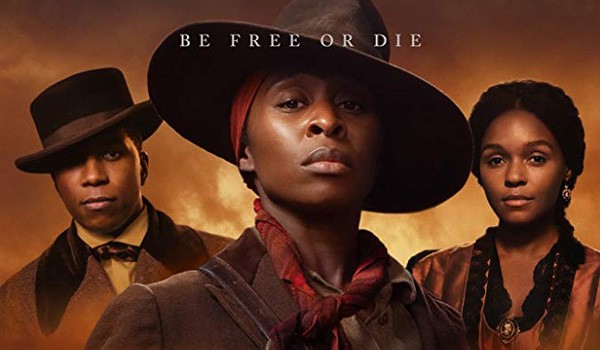 The reviews of Harriet (2019) have been mixed, with major publications calling the film everything from ‘dutiful‘ and ‘contrived‘ to ‘rousing and powerful‘ and ‘rich, enlightening.’ I’ll come right down the middle and call it a satisfying biography with a solid grounding in history and an entertaining not-too-cliched plot. This movie doesn’t reinvent the biopic form, and director and co-writer Kasi Lemmons doesn’t need to. Harriet Tubman‘s real life is rich and wild enough that a simple telling with strong performances does the trick.

The story covers Tubman’s escape from slavery and shows several of her expeditions to free those still in slavery. The main action takes place from the late 1840s through the 1850s, with a few brief scenes during the Civil War when Tubman lead the Combahee River Raid. The ‘bad guys’ are heavily fictionalized, with her owner’s son becoming an obsessive racist who hires a black slave catcher. But there’s a grain of truth in even those caricatures, and they don’t distract from the otherwise riveting tale.

Since the film is still in theaters in the U.S., I can’t get many photos, but costume designer Paul Tazewell has been doing the media rounds and shared plenty of details about his fine work. Going in, Kendra and I thought this would be a lot of butter-churny boring costumes, we were pleasantly surprised. Sure, the clothes worn by Harriet at the beginning, along with the rest of the enslaved people, are plain, but the garments are rich in details. You can see repairs and patches because the clothes have been handed down and repaired, and the choice of fabrics reflects the specific time and place. Tazewell told Awards Daily about the first costume we see Harriet (played by Cynthia Erivo) in:

“Her first dress was linen. Actually, not for this plantation, but in researching clothes for slaves, the fabric was sometimes woven by the actual slaves. They would weave the fabric. They would grow the cotton or flax and they’d spin it, weave it and make clothes out of it. Often times, the fabrics that were used were specific to a certain plantation. So, if they escaped, they would know where that slave was from. We weren’t quite as specific for this plantation because it wasn’t a very big plantation, so fabrics were purchased by neighboring plantations.” 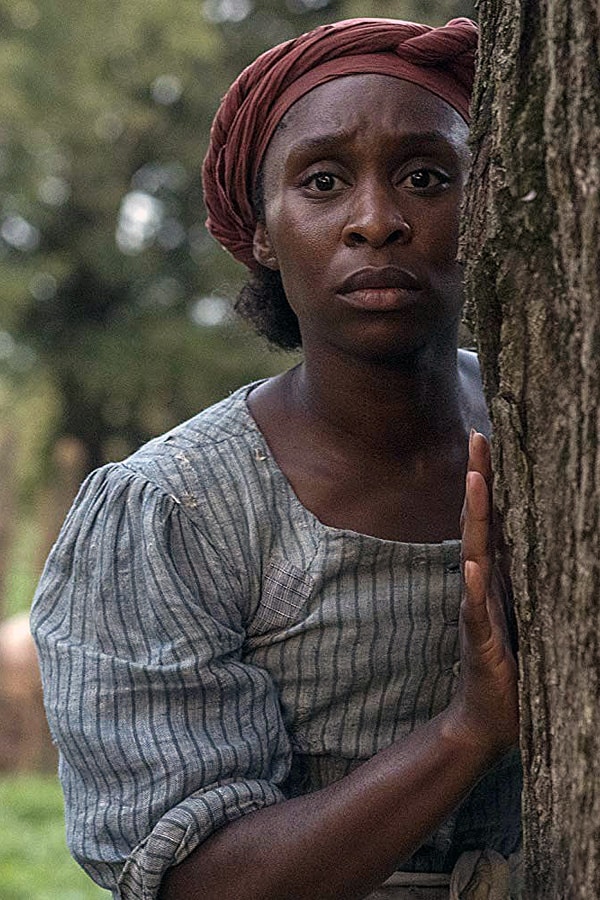 When Harriet escapes to Philadelphia, she joins a community of free black people who are dressed in gorgeous outfits. In particular, the fictional Marie Buchanon (played by Janelle Monáe) runs a boarding house for former slaves and has a fantastic wardrobe. In The Hollywood Reporter, Tazewell describes Marie:

“Janelle’s character is a self-made woman. She was born free and never experienced what it was to be a slave. She is well dressed and has a sophistication about her.” 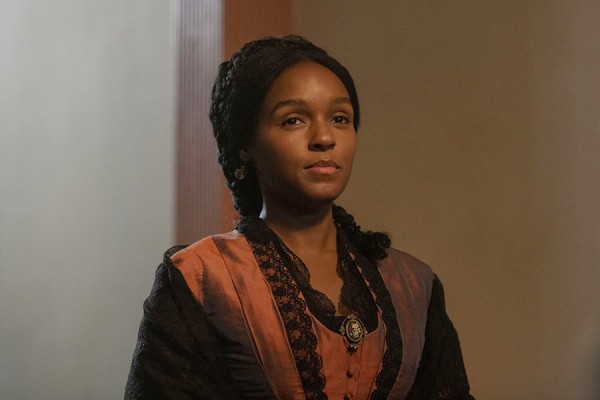 The other character, aside from Marie, who wears spiffy outfits is William Still (played by Leslie Odom Jr.), a historical figure, a free black man, who’s sometimes called “The Father of the Underground Railroad.” Tazewell said in The Hollywood Reporter:

“People were much more worldly than you would imagine, and he was very well dressed. Leslie had no problem pulling the looks off.” 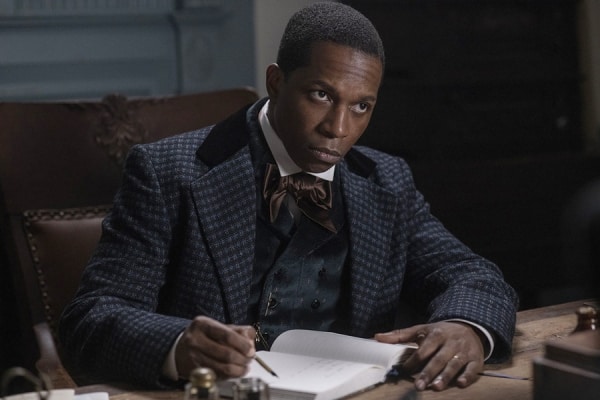 It’s from Marie in Philadelphia that Harriet gets her own new wardrobe. 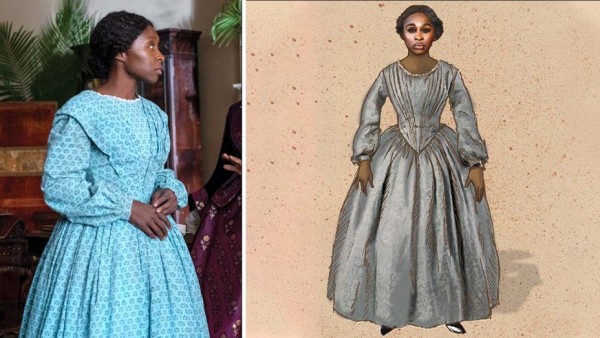 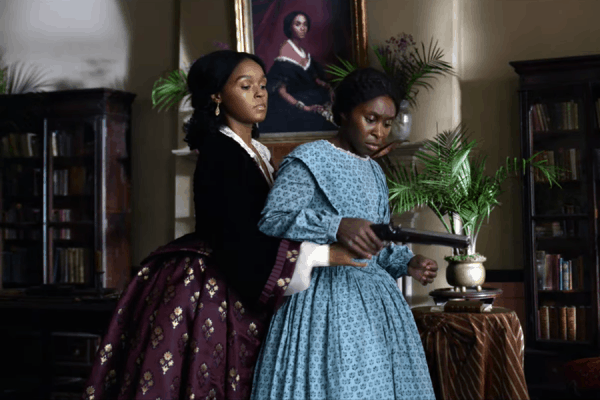 Marie shows Harriet how to use a gun. Note Marie’s rich purple & gold brocade skirt with black jacket. Also, there’s a portrait of an African-American woman on the wall (maybe it’s supposed to be Marie?).

Tazewell referred to period daguerreotypes and other historical imagery to design these costumes, and even used vintage items in some of the outfits worn by Janelle Monáe. “All of the period detail, I’m very passionate about, and they’re very important elements within my design capabilities,” he said to CR Fashion Book.

One particular photo of Harriet Tubman inspired a costume Tazewell designed for a scene where she’s having a portrait taken. He described it in WWD:

“In this newly found photograph, Harriet is younger. And it was very interesting to compare that to the other photographs that we know of her, that we’ve seen before. Most of those photographs that we’ve known are from when she was more mature, when she was older. They tend to be austere, they seem understandably unhappy and also very modest, usually with a head wrap and dark clothing. In the new photo, she’s wearing a very light checked skirt and a sheer blouse and her hair is uncovered.” 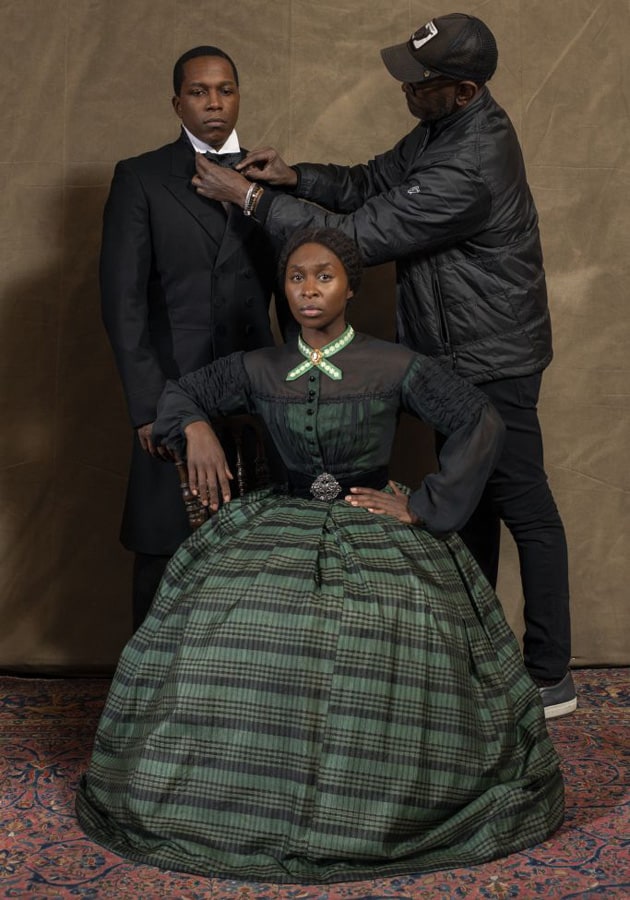 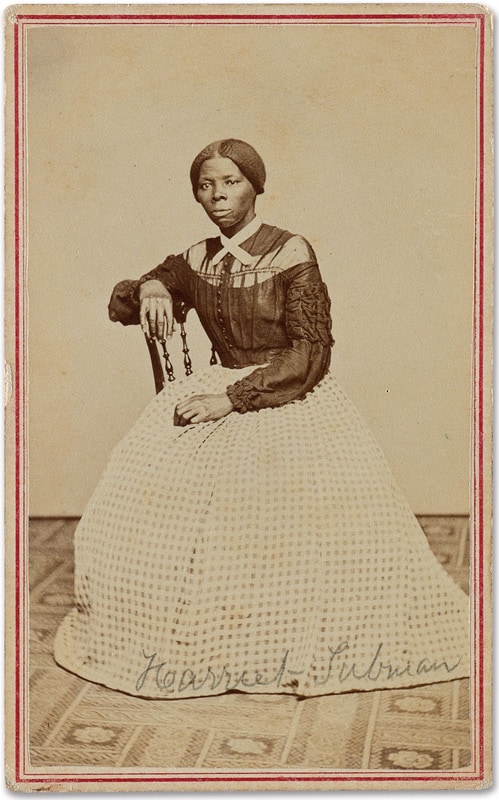 Another important outfit is the green gown Harriet wears for her first return to the south. It’s a lovely green dress that Tazewell describes in WWD:

“I made that be a kind of an iridescent green, because I wanted it to be reflective of the nature she was moving through. It had a strength, like spring. There was a new life coming forward.” 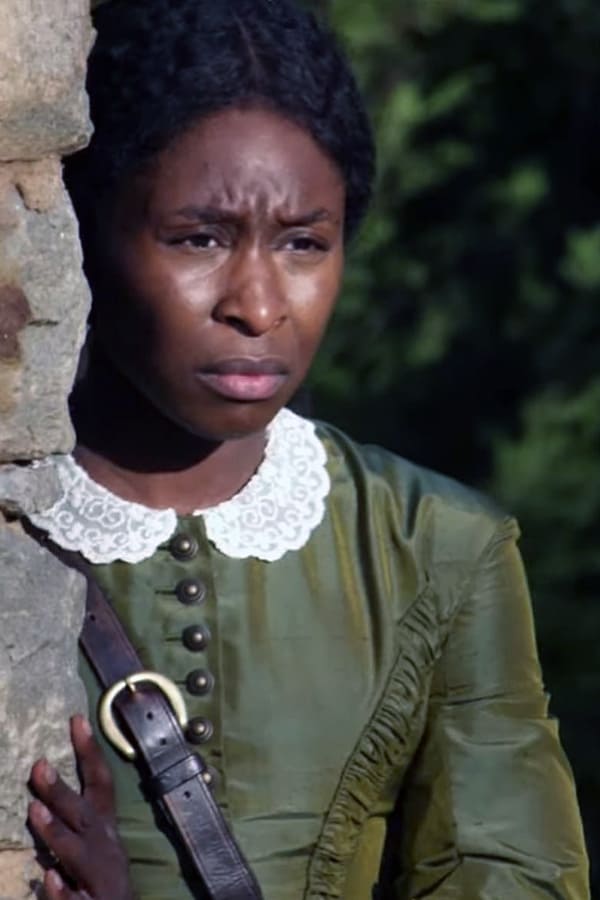 This is the only image I could find of the dress, but you can see a little bit of the details.

During later rescue missions, Harriet wears disguises to go undiscovered, which is based in fact. In the film, she even wears men’s clothing, though I have no idea if that is true. 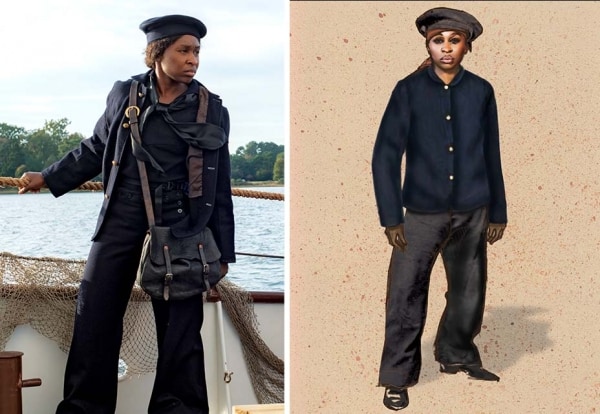 Harriet delivers a moving speech to northern abolitionists wearing a beautiful black gown, as she’s in mourning for her sister. This is easily the fanciest outfit in the film. 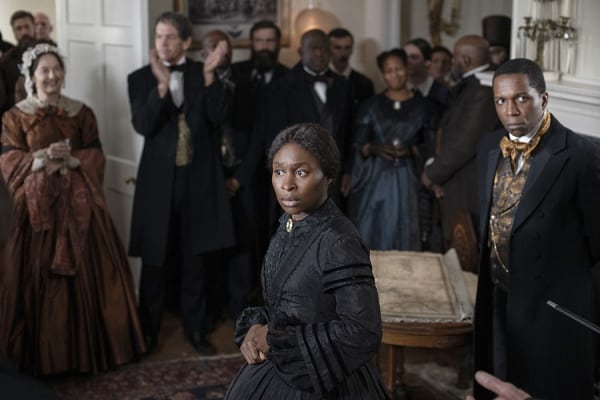 I lightened this photo to show more of the gown’s details.

The rest of her outfits are rough-and-ready coats that Tazewell describes in many interviews as her ‘superhero’ costumes. 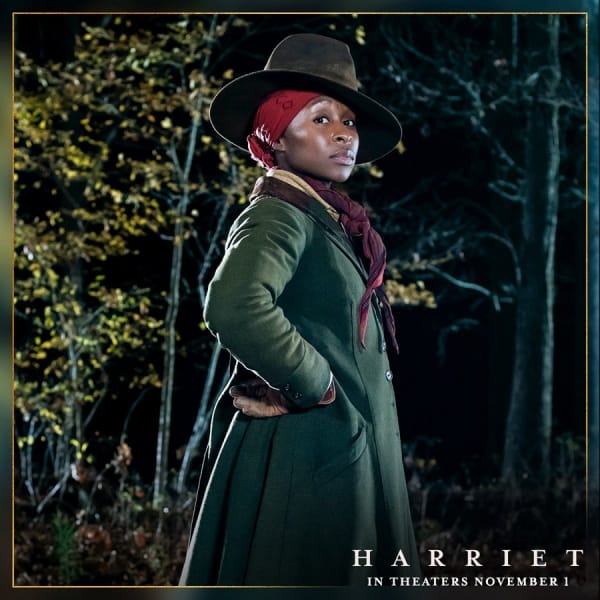 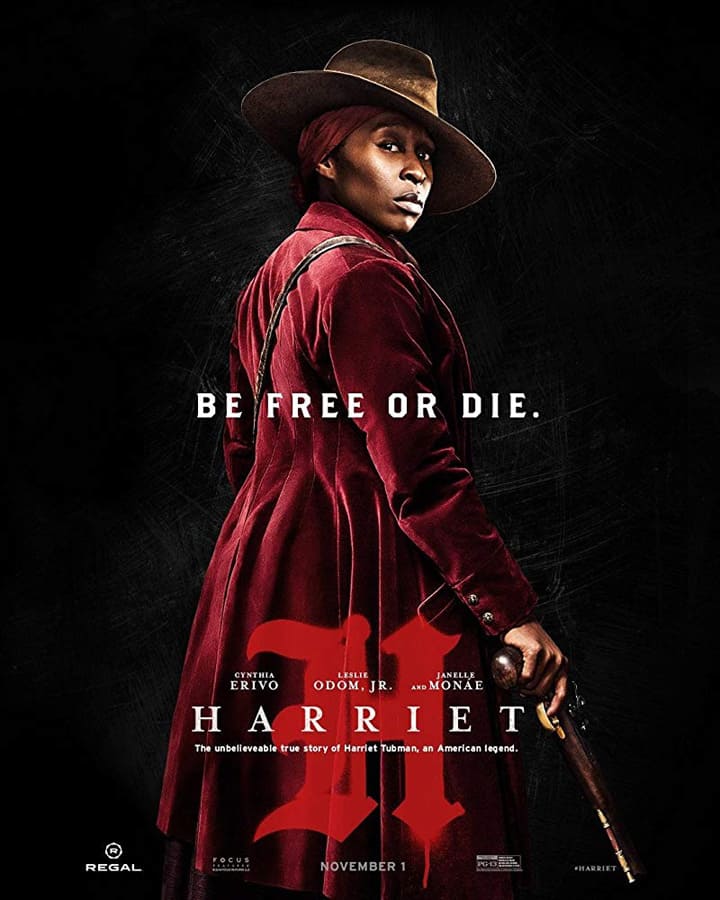 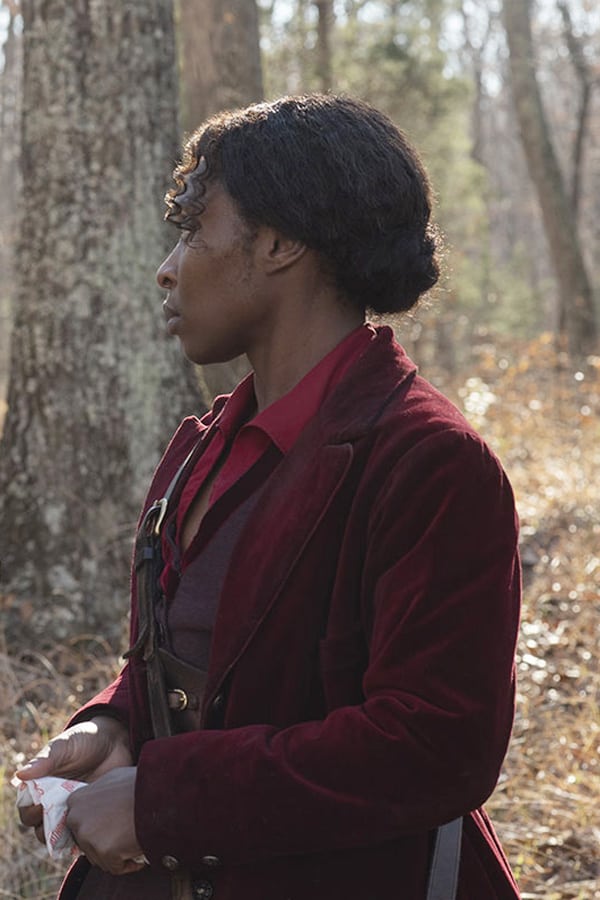 This leads up to her ‘uniform’ during the Civil War. In Fashionista, Tazewell says these costumes track together to show Harriet’s personal transformation:

“I’ve created an arc with the design that starts from a very humble beginning, obviously, as a slave, but then creates this super human persona — that she becomes a Superwoman.” 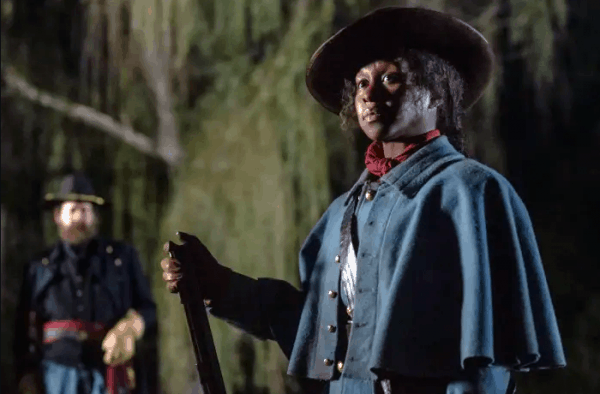 While this isn’t a froofy frock flick, the historical look and feel is solid and grounds the story. I agree with director Kasi Lemmons who said in The Hollywood Reporter of Paul Tazewell’s work:

“When I saw the finished [results], it was both what we had discussed and what he had sketched, but with such texture, color, and attention to detail that I was blown away. His work was critical to the look and authenticity of the film.”

Have you seen Harriet yet?