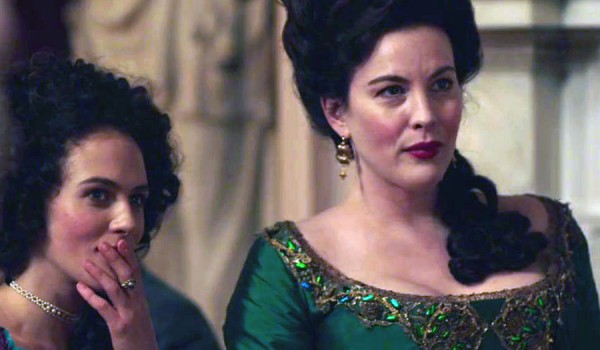 Frock Flicks note: This is a guest post by our friend J. Leia Lima Baum, @jleialimabaum. She’s a fashion historian and archivist based out of New York City, where she got her MA in Fashion and Textile Studies at FIT. In addition to working in the fashion industry, Leia also runs a consulting business helping museums with exhibition mounting and costume reproductions. She travels around the world for costume events, academic conferences, and vintage hunting. Ask her about normcore!

If there’s a material that gets costumers All The Points for incorporating a material that is a) unusual, b) visually striking, and c) misunderstood in the annals of fashion history, it’s beetle wings.

Season 3, Episode 3, of Harlots (2019) features a dress with a bodice embroidered with beetle wings, worn by Liv Tyler as Lady Isabella Fitzwilliam.  The dress is made of a luscious emerald-colored fabric, with the stomacher and neckline embellished with gold embroidery and elytra.  The costume is regal, powerful, striking, and exotic, all fitting for Lady Fitz. 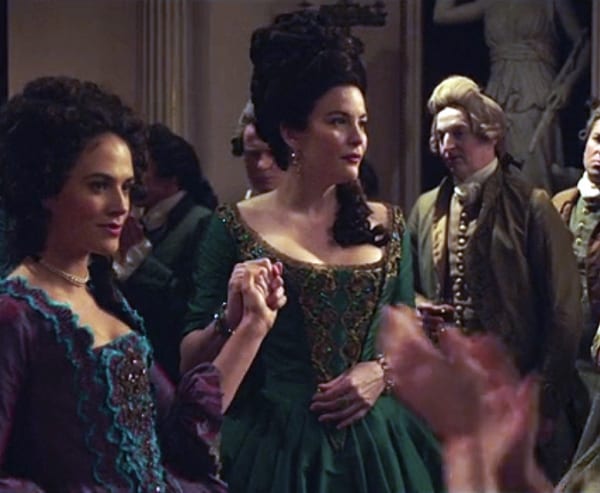 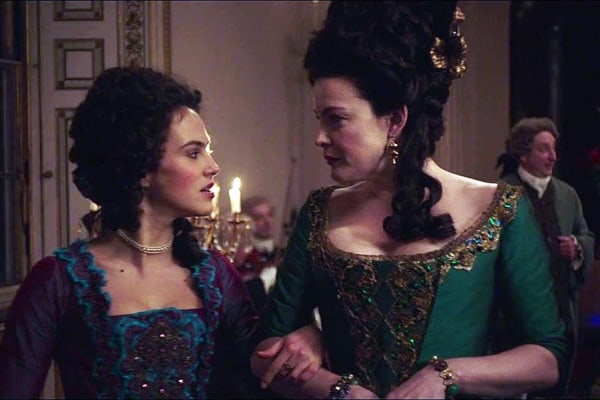 Would a woman of Fitz’s station be, in fact, wearing a dress embroidered with beetle wings in the show’s fantasy-laden 18th-century world? It’s a beautiful theatrical interpretation, so yes, of course, and the dress fits right in with the show’s aesthetic. 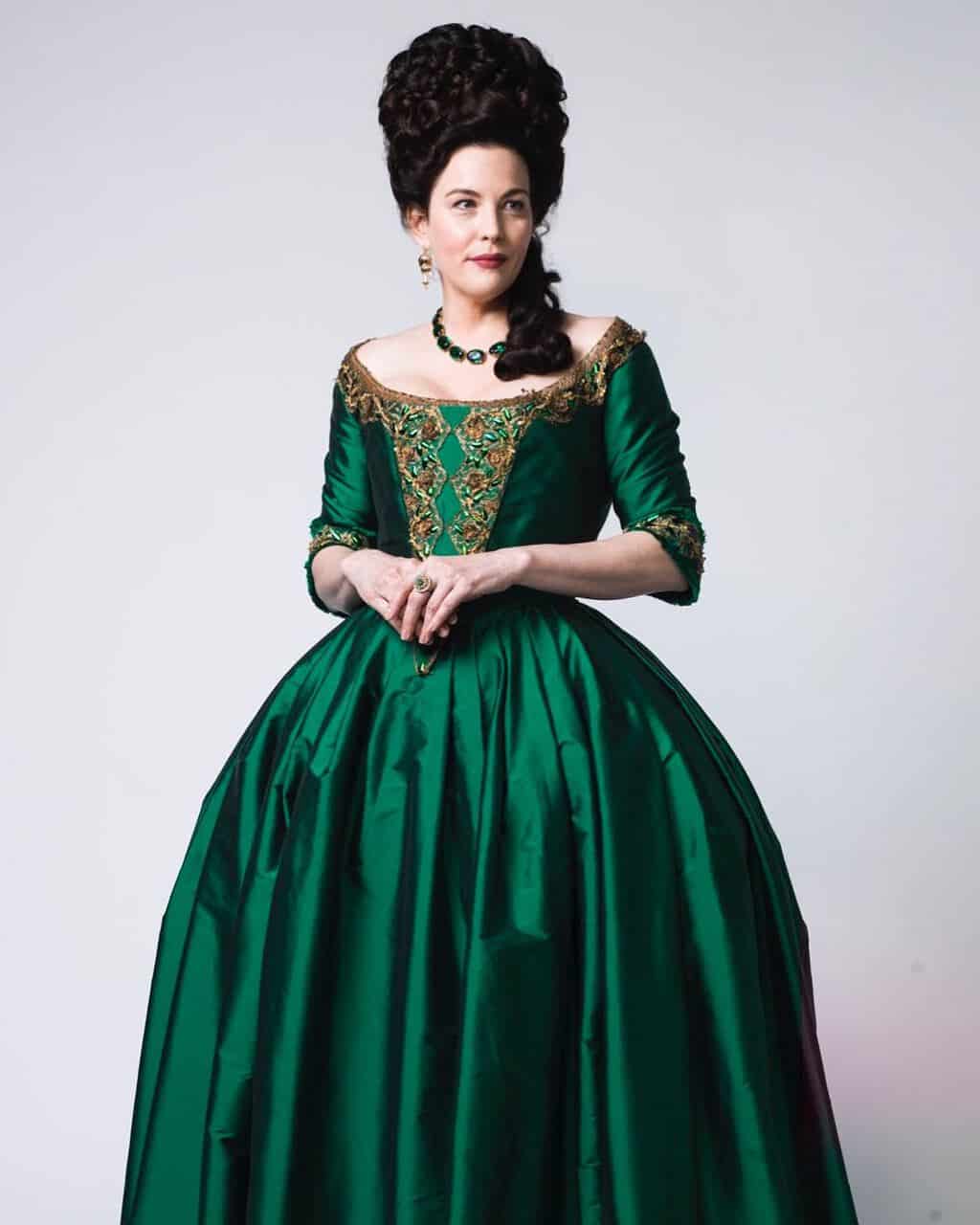 Full image of Liv Tyler in the gown, posted by costume designer Richard Cooke on Instagram.

But what about historical accuracy in the real world? Let’s examine Western fashion’s relationship with beetle wings and see what would, or could, have been worn in the real 18th century England.

Beetles, clearly, are nothing new. For centuries, the iridescent wings of beetles have been used as adornment, from the ancient Egyptian veneration of the scarab beetle, to the Amazonian tribes that used colorful elytra and feathers to create ceremonial jewelry, to the “singing shawls” of the Pwo Karen tribes of Thailand and Burma (the wings are strung together like tassels and make a delightful tinkling sound with the wearer’s movements). The brilliance of beetle wings do not fade over time, perhaps adding to the mystical connotation of these insects. The wings are made of chitin built up in thin layers. This causes a phenomenon called interference, in which light rays superpose each other in the minute spacings between the chitin layers, giving the wings a brilliant spectrum of color that changes depending on the viewer’s angle. Yay science! 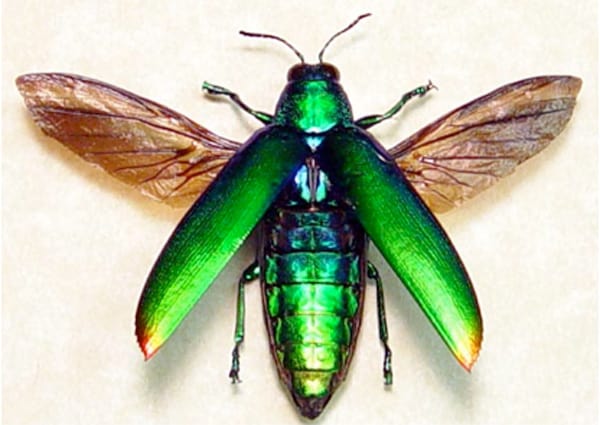 Beetles have two sets of wings: a pair of soft, delicate, and disgusting wings that are responsible for flight, and a hard, outer, pretty set to protect them.

So why would a lady of means in the 18th century consider beetle-wing embroidery a fashionable feature?  Well, that had everything to do with the colonization of India.

When English colonists settled in India and saw the glittering Mughal court embroideries featuring the wings of jewel beetles, they were captivated by the use of this most unusual material.  They were, however, homesick for England, and so they continued to dress in the Western style, although they pragmatically had their clothing made out of lighter Indian cotton that was more suited to the warm climate. 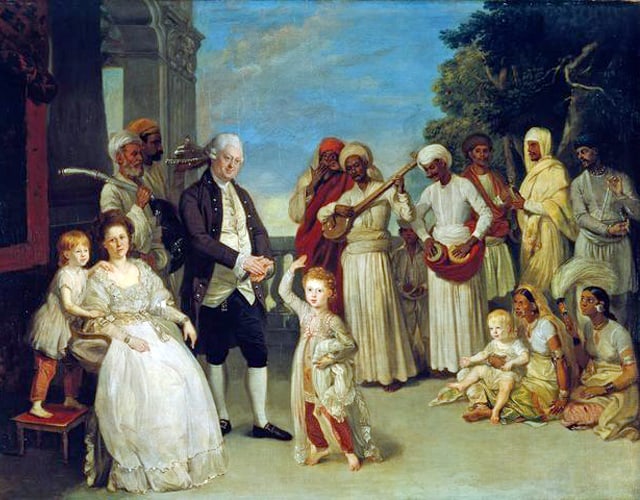 An English family hangs out with Indian musicians.  The children are cheerful and have adopted elements of Indian dress.  Lady Impey in a chemise dress looks … hot and miserable. Johan Zoffany, “The Impey Family Listening to Strolling Musicians,” ca. 1783, oil on canvas, Museo Nacional Thyssen-Bornemisza, Madrid.

Gradually, Indian taste began to find its way into fashionable dress. There is a bit of surviving correspondence between two English women in India from 1784, in where one was interested in commissioning “several pieces of the thickest muslin to be worked in some small pattern in the fly’s wing, and gold, a leaf or something of that kind.” Eventually the letter writer did not end up commissioning the beetle-wing embroidered dress, but opted for silk embroidery instead. 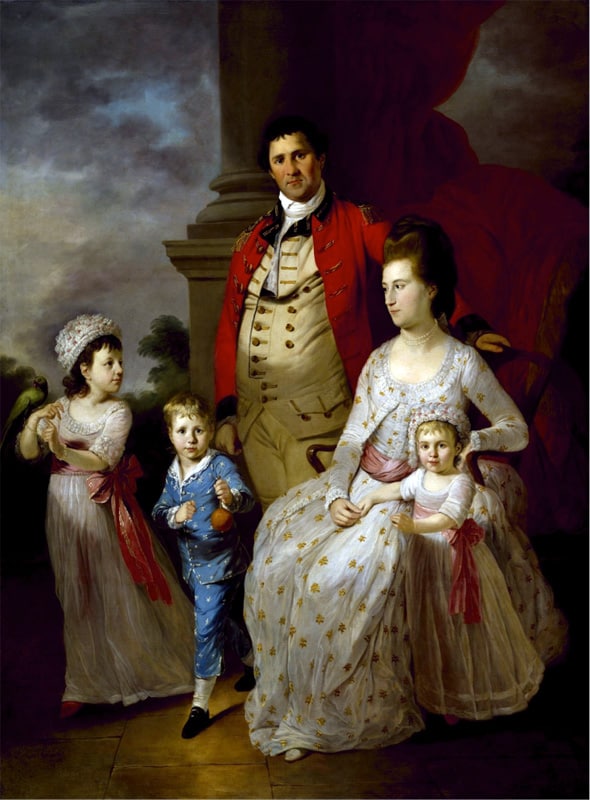 The robe à la polonaise worn by Jane Fortnum in 1775 is made of Indian muslin with goldwork embroidery in sprig motifs.  Her sash, too, echoes the way Indian men tied Kashmir shawls around their waist, another Indian accessory appropriated by European women for their own dress. Tilly Kettle, “Colonel John Fortnum and Family,” 1775, oil on canvas, Museum of Fine Arts, Houston.

In traditional Indian embroidery techniques, beetle wings appear to be universally embroidered along with rich metals, and are considered a feature of metalwork embroidery; in surviving examples of Indian beetle-wing embroidery, they are without fail accompanied by goldwork — beetle wings by themselves aren’t really a thing. Harvesting beetle wings is as easy as sweeping the forest ground — beetles swarm when they mate, then they die, and their bodies decompose quickly. Loosen your grip on your pearls; no beetles are harmed in beetle-wing embroidery. 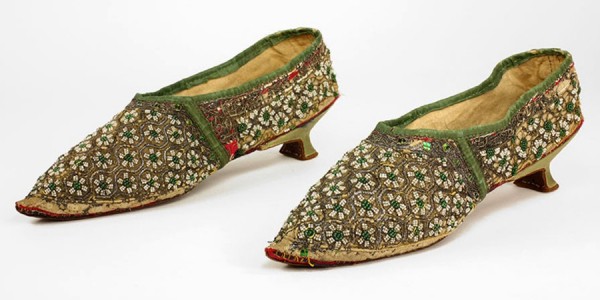 In the memoirs of Fanny Parkes, who traveled through India from 1822-1845, she describes Indian footwear: “The slippers for the ladies are of cloth, of the gayest colours, ornamented with embroidery of gold and silver, adorned with seed pearls, and with beetle wings, which are worked into flowers upon the cloth, and cover the long peak that turns up over the toes.” This is a remarkably similar description to these shoes believed to be made in India for the English market. Shoes, linen with gold and beetle-wing embroidery, 1790s, Bata Shoe Museum. 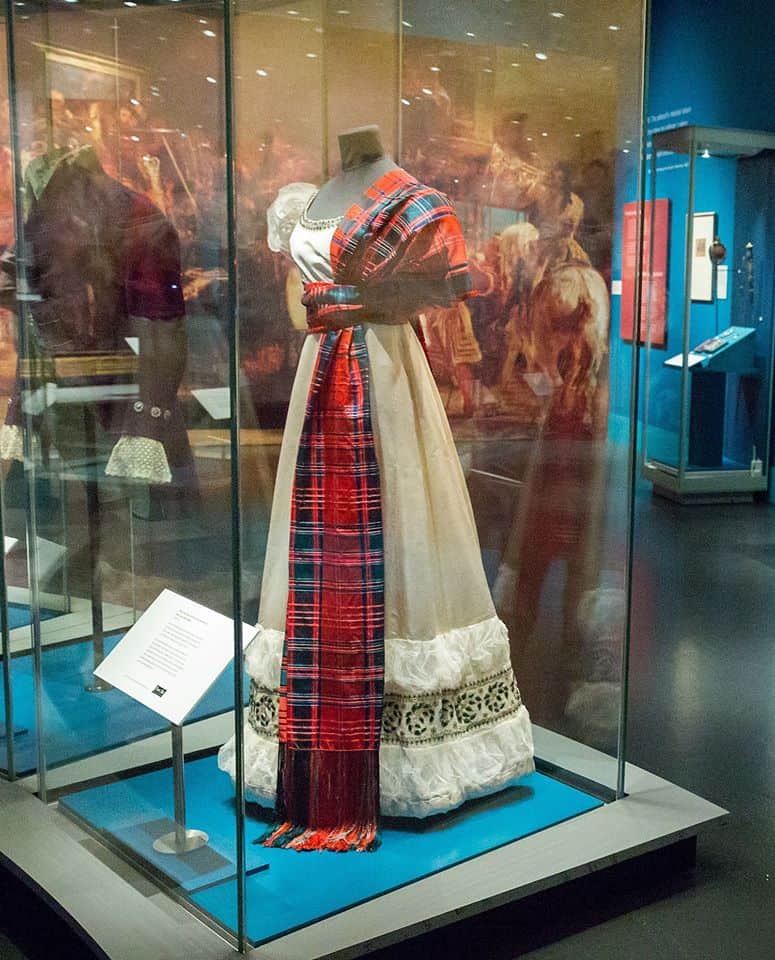 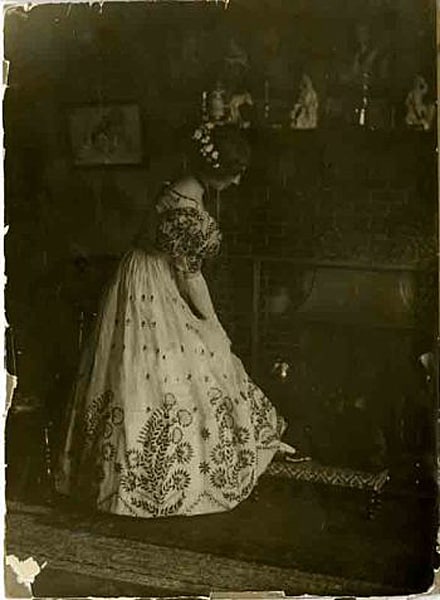 An 1820s silhouettes with stylized butas in beetle wings.  Dress worn to a ball by Lady Jane Russell ca. 1827-1831 when she lived in India.  Photograph is obviously not contemporary to the ball, but I didn’t need to tell you that.

Deviation from metalwork + beetle wings + white muslin ground didn’t really start to come into play for a few more decades. The earliest example I can find is from the Great Exhibition of 1851, in which Miss Mary West exhibited a black lace dress that featured the “novel application of the beautiful beetle-wing … so much used in Indian embroidery, but seldom seen in any executed in England.” 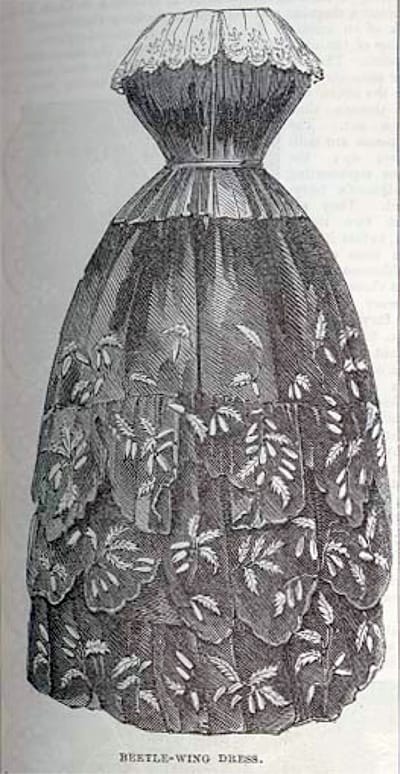 In all seriousness, what the fuck kind of a dress is this?  Did the artist/journalist run out of steam and didn’t finish the dress?  Or Mary herself?  I mean, the skirt’s embroidery is well documented, but how does that bodice-type thing even work?

Eventually, more and more commerce grew around exported beetle-wing embroidered textiles. It was common to be able to purchase pre-embroidered panels and sew fashionable dresses. Eventually the DIY craze hit, and actual beetle wings themselves were imported into England, and women took to embroidering their own pieces. 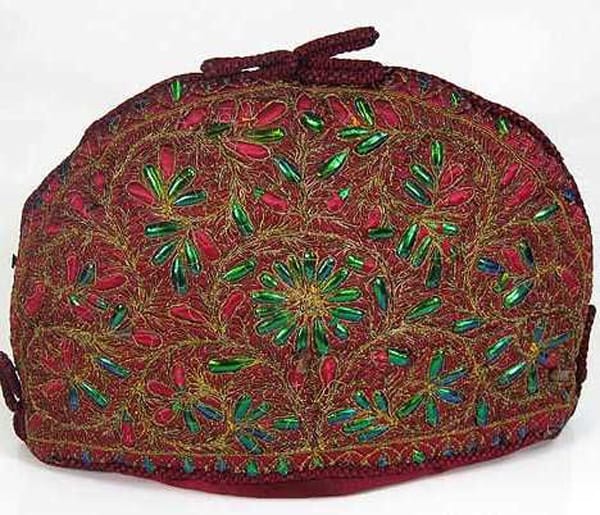 A tea cosy embroidered with beetle wings with a plum silk ground, more aligned with English embroidery traditions and breaking away from the traditional Indian white muslin. Supposedly this object was created by male embroiderers in India for export.  Tea cosy, ca. 1867-1890, Hampshire County Council. 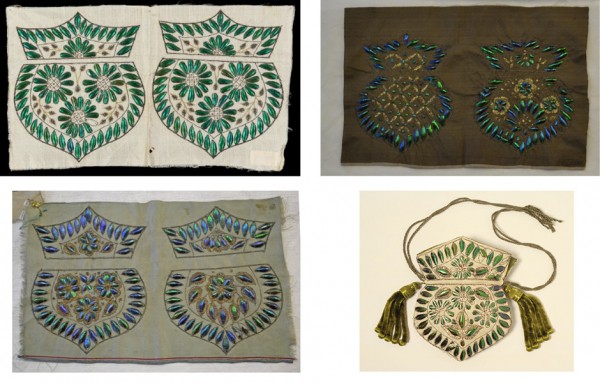 So back to Harlots. Is it possible that in the 1770s there was a woman in India who was taken by the glittering local embroidery customs and wanted to inject that “otherness” into her wardrobe, so she commissioned an embroidered stomacher and neckline trim for her dark green dress? Well, anything’s possible, much like how the same woman could discover that by carving metal into long strips of “teeth” she could easily zip her way into and out of her clothing. In reality, the first Anglo-Indian beetle-wing dresses, presuming there were others lost to time, were probably more like Jane Fortnum’s goldwork dress — a striking embellishment on the fabric from which the dress was made, not an application onto an existing dress.

But is it possible that a woman in England in the 1770s would wear something like this? Probably not. After months of sea travel, letters, textiles, and other goods were subject to mold, shipwrecks, theft, destruction, and any number of other disasters. And even when imported textiles and goods did make their way to England from India, there has to be a certain adoption by many people in order to make something fashionable. Otherwise, you’re just the solo kook who likes gross bugs. Fashionable dialogue was frustratingly slow between England and her Indian colony.

Chances are infinitesimal that an aristocrat in England would be so ahead of the fashion game that she would know that bug parts could be effectively applied to her stomacher and neckline and bring out the It Girl she always knew was inside. 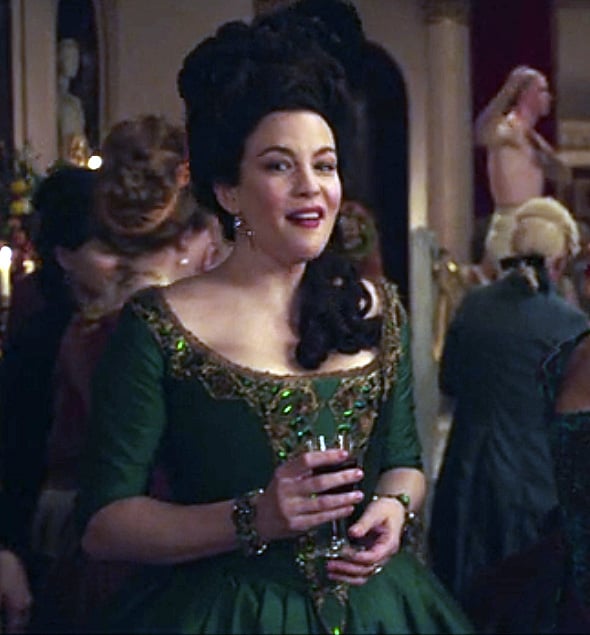 That face you make when you realize you’ve just been found out.

Did you notice the beetle-wing embroidery on Liv Tyler’s gown in Harlots?