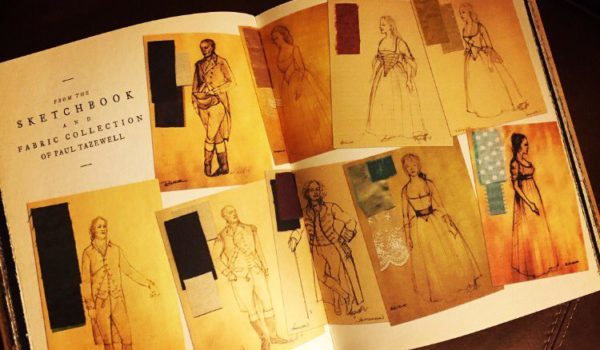 Frock Flicks doesn’t usually venture into theater costume. Being that we don’t live New York City or London, we don’t have easy access to major, first-run theater productions, so that realm of costume isn’t part of our regular milieu.

However, it’s hard not to notice Hamilton (2015) this season. The songs are everywhere, writer/star Lin-Manuel Miranda is everywhere from carpool karaoke on The Late Late Show to rapping about Puerto Rico on Last Week Tonight, the soundtrack won a Grammy, the show won a Pulitzer Prize for drama, it’s permeated American pop culture like few Broadway musicals have since, what, Cats or Annie except with a socio-political-historical conscience. And last Sunday, it swept the Tony Awards, as it was predicted to do, including costume designer Paul Tazewell winning for best costume design in a musical (after five previous Tony nominations). 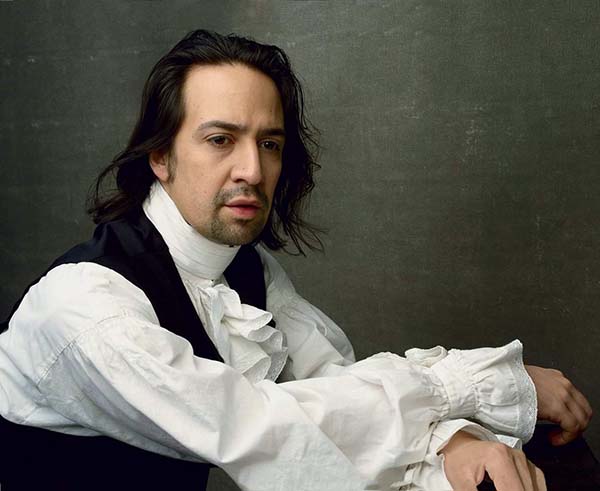 The show Hamilton tells the story of Alexander Hamilton, one of America’s founding fathers, first Treasury Secretary, perhaps best known for dying after a duel with then Vice President Aaron Burr. Using rap, hip hop, soul, and pop, along with bits of more typical showtunes, Hamilton tells the biography with a decent amount of historical accuracy by most accounts — tightening up details for dramatic tension and to fit the running time, as you’d expect, but not giving a radically fictionalized version of Alexander Hamilton, George Washington, Thomas Jefferson, or any of the other historical figures who are included. According to writer Lin-Manuel Miranda in Rolling Stone:

“Whenever I was in doubt as to creative license, I would always go back to his [Hamilton’s] writings. That was the gut check. And if you start from the premise that the truth is more interesting, that created the contours of our show. And also being really rigorous about sticking to Hamilton.”

Likewise, the costume design carefully references the 18th-century period of the actual people, while updating the look to fit with the modern music. The designer did a lot of research as well as talking with the musical’s writer. Tazwell said in the Observer:

“If I’m doing something set in a specific year about specific people, I’ll go online and research. But something can be set in a period, and I’ll be told to abstract it and mash it up. That’s what Hamilton is. It’s an exploration, a journey. We needed to decide the most compelling way of presenting this visually. These are people we’ve lived with most of our lives, the founders of this country. How are we going to make it new and exciting? It was important for the audience to feel a youthful vigor.”

While sharing his design sketches and inspirations for the show in many articles, Tazewell told Bloomberg what the essential costume design for Hamilton meant:

“We see [the characters] as these stodgy, periwigged — like these paintings. But the reality was they were upstarts, from the street. Well, not of the streets, but they had that kind of energy: ‘We’re going to mess this up, we’re going to create our own story.’ … Tommy [Kail, the director] and I decided it was most important to have the period represented from the shoulders down, and then everything from the shoulders up was contemporary. A representation of the actor and what they brought to the character, unadorned.”

Tazewell felt this worked well to blend the history with the hip-hop, saying in Playbill, “It was exciting and fresh to see how the contemporary language and music that Lin wrote smacked itself up against the period style and silhouette of the actual people.” 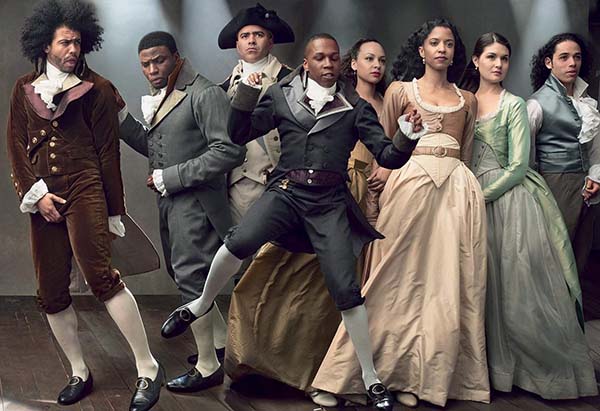 The chorus of singers and dancers — many of whom switch roles throughout the show — are dressed in tones of pale tan that evoke the parchment of papers, letters, legal documents, and broadsides that made up so much of the founding fathers’ political activity, especially Alexander Hamilton. This also let the principal characters stand out. According to Tazewell in Tyranny of Style:

“The neutral base became the visual metaphor of parchment, the paper that Hamilton was creating his life with. That then provided a costume base to be able to add costume pieces that are more specifically representative of character by color and style.” 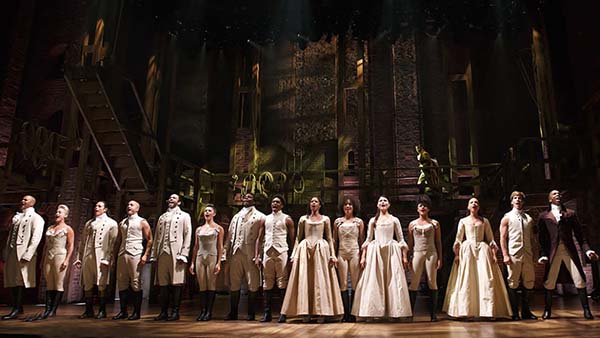 Hamilton himself wears green to symbolize money, a specific request from Miranda to Tazewell. Thomas Jefferson is seen as the era’s rockstar, which is expressed somewhat literally by Jefferson wearing a bright purple jacket a la the musician Prince. Miranda comments in Rolling Stone:

“It’s about eliminating distance. If your mission is to make a story that happened 200-odd years ago resonate with contemporary audiences, what are the ways in which you can eliminate distance? And, man, does that purple suit with a frilly blouse do that.” 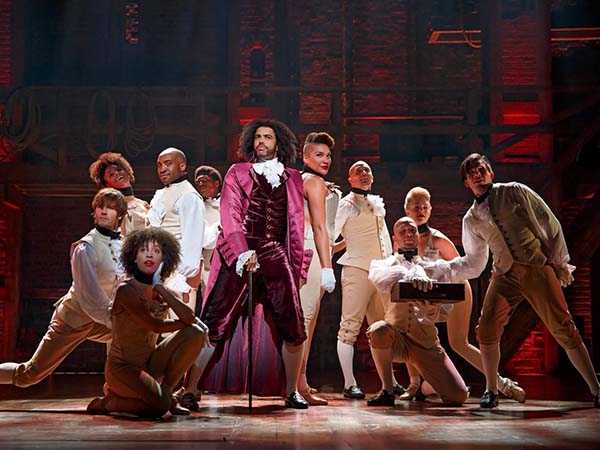 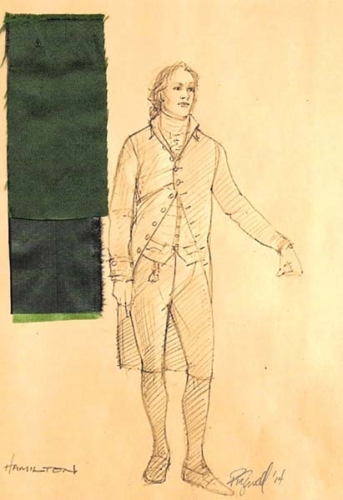 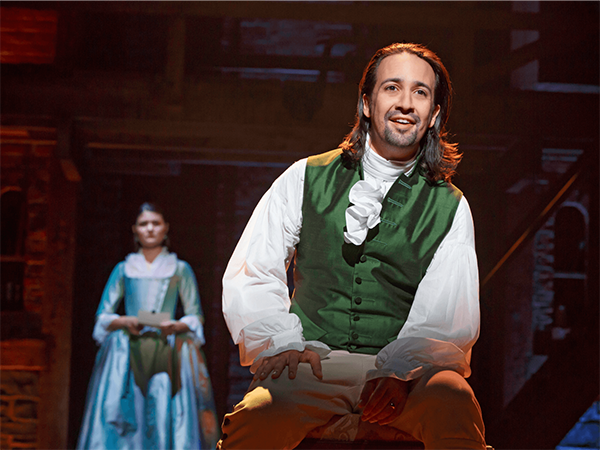 Perhaps the most historically accurately dressed character is King George, complete with white curled wig. Since he’s set up as the opposition in distant in England, it makes sense that he has the most “different” and least approachable costume. 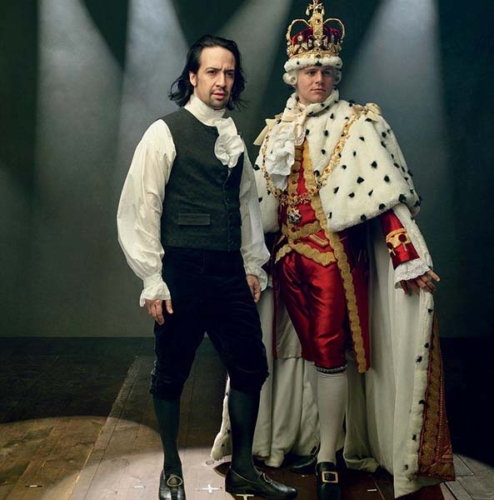 The contrast between American Hamilton & old-world King George (Jonathan Groff) is heightened by the costumes. Photographed by Annie Leibovitz in Vogue, July 2015.

But for all the symbolism and modern “reliability,” the Hamilton costumes do evoke the historical period of the time. Looking at the pictures, what comes through is a genuine sense that this is a historical play, this is about real things that happened. It’s not a fantasy story, and it’s not a comedy making fun of the past. The historical costumes are stripped down, but effective for providing a historical context.  This is probably due to the care Tazewell took with the construction and materials. He said in Tyranny of Style:

“I used mostly silk taffeta for the dresses on the women because it stays crisp and light and moves in a way that viscerally feels like the 18th century to me. As we head into the later years of their lives they go to cotton voile and nets, which were prevalent in the 1800s Regency period.”

And it shows in the fullness of the skirts and how they move. Likewise, the men’s suits have all the buttons and collars, waistcoats and shirt frills, all the elements you’d see in any period production. Another thing Tazewell made sure of was having the principal male characters in riding boots during the wartime part of the story, but as they mature into statesmen, they are wearing shoes and hose. All these details matter, and it looks like Hamilton didn’t skimp. 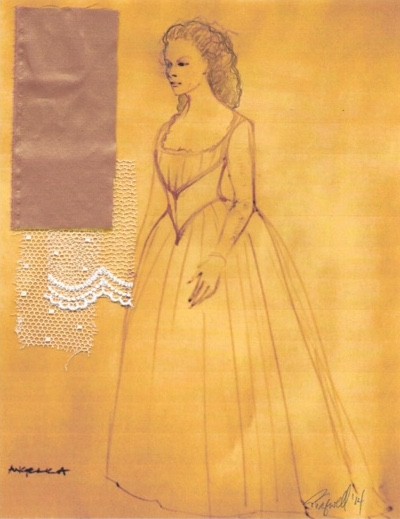 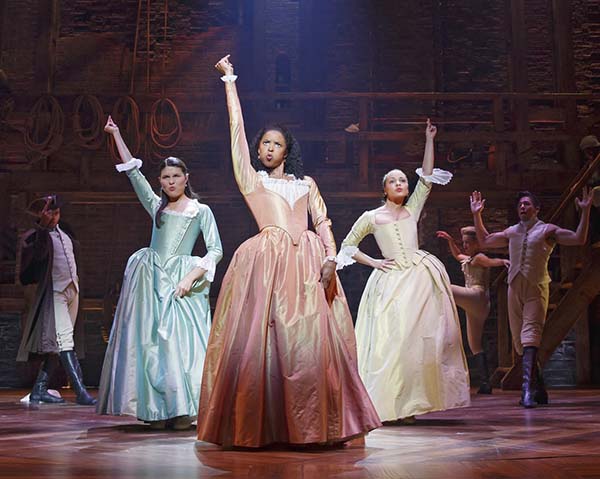 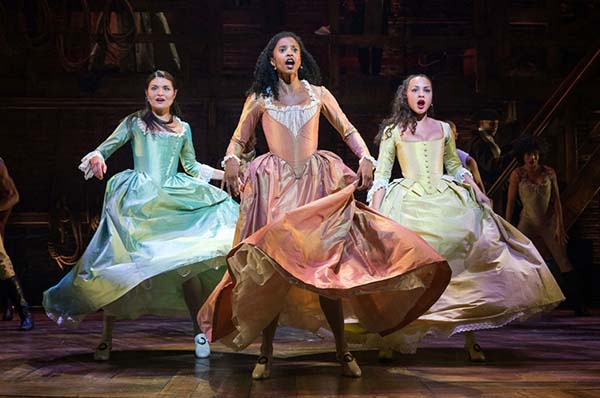 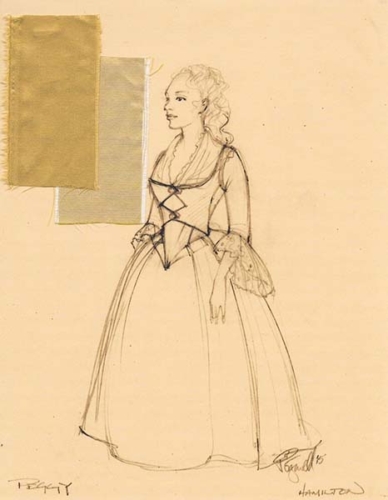 Tickets for the Broadway show are sold out till the end of time, but touring productions are planned for 2017. I hope to catch the show then and see if it’s as good on the road as it has clearly been in NYC!

Have you seen Hamilton? Do you have the cast recording?