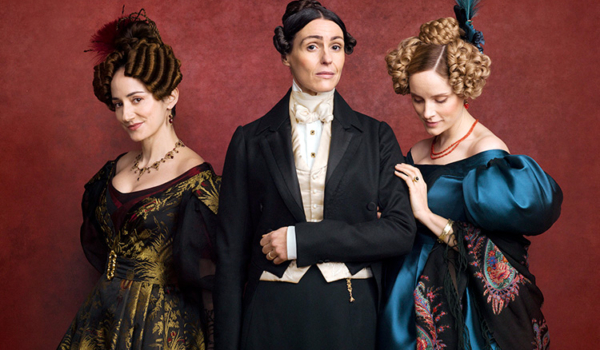 June is LGBTQ Pride Month, so we’re featuring fabulous queer frock flicks each Thursday. Queer folks have always been part of human history, long before there were words to describe these identities and orientations. But now we can and will say GAY! (and LESBIAN! and BI! and TRANS! and QUEER!) proudly, whether or not others try to legislate or pray it away.

A second season of Gentleman Jack (2019-) just finished airing in the U.S. and U.K.. I ended up watching them all out of order because I was staying in London for a bit, thus no recapping like last time. But because of that trip, I was able to catch costume designer Tom Pye again on the phone and talk about the second season a little bit. So let’s admire some of his work and hear what went into it! 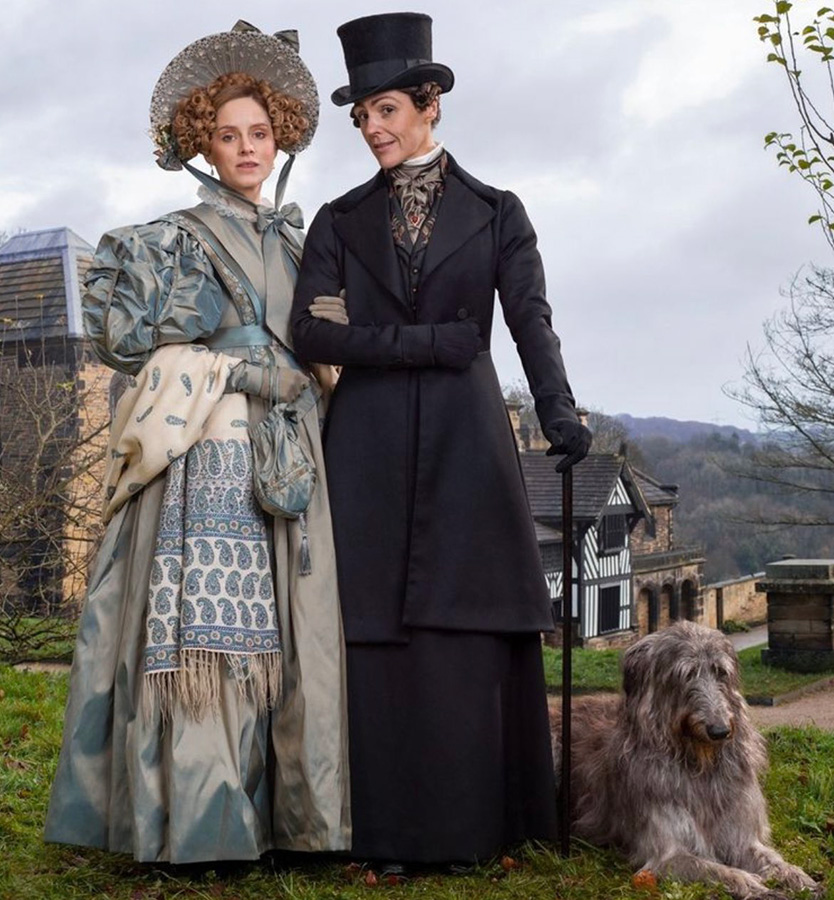 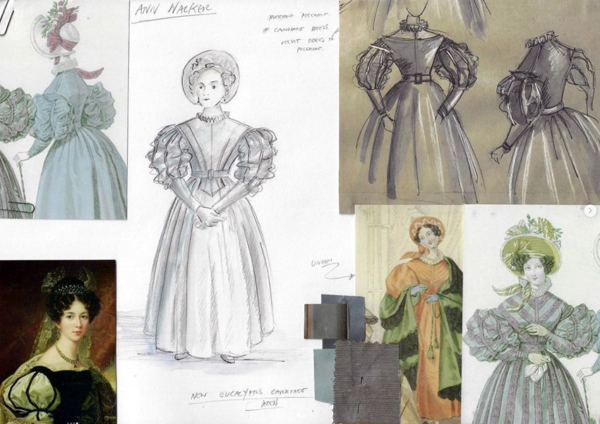 Tom Pye’s sketches for one of Ann Walker’s dresses, posted on his Instagram.

Frock Flicks: We love how the costumes are a little different from season one. What was your point of view for this season?

Tom Pye: The diary picks up just one month after season one, but I knew that I wanted to come back to it and do something new and fresh, just to keep myself interested and excited with it and that the audience would want to not see the same old costumes. They’d want to move on. But I also had to make sense of the diary, since it’s only one month later. So I straddled that in the first episode by having lots of the same costumes — which wasn’t that easy as they’d gone about everywhere. And then by episode two, having lots of new looks. 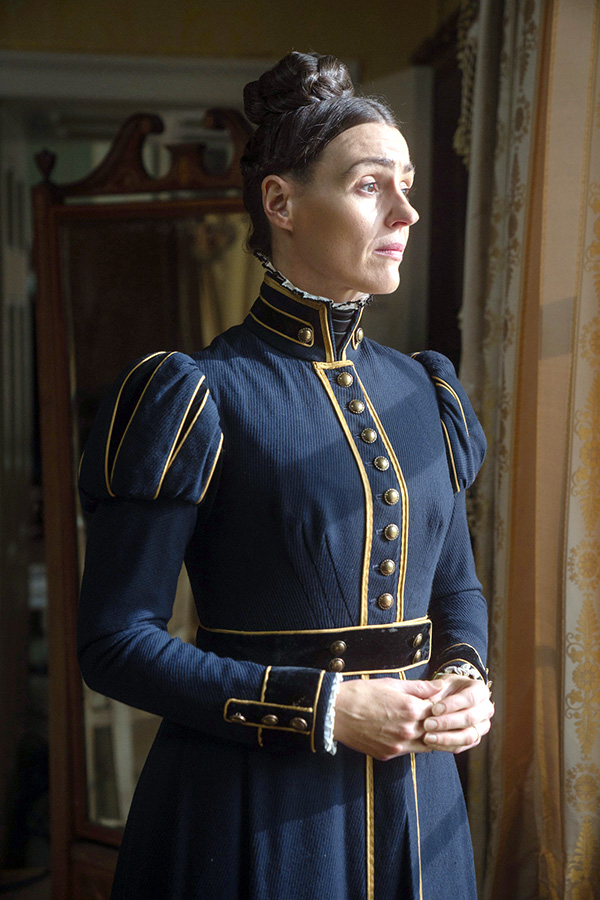 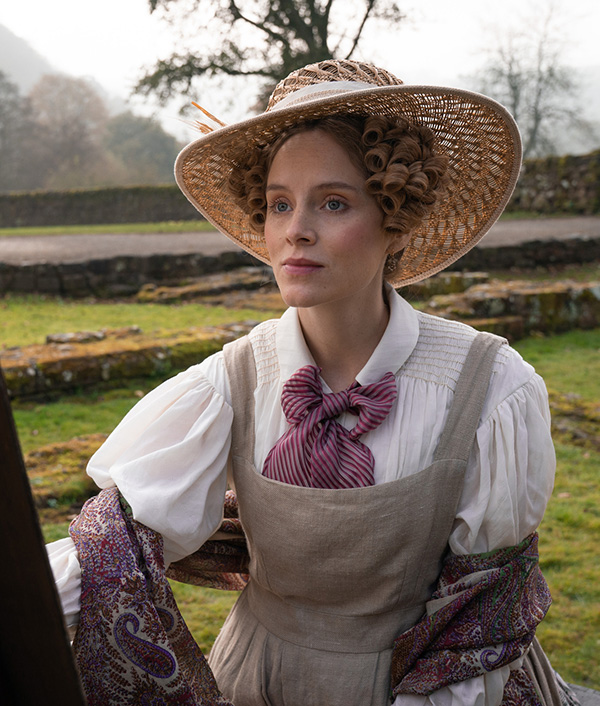 Tom Pye: I feel like, when couples move in together, you do get a shift, and when people are married, you get a sense of security. People’s wardrobes start to morph into each other. I think there’s a maturity in Ann Walker, she’s the one who shifted the most. She’s a lot more mature than the bright pinks and pale blues and lots of lace pelerines in season one. She’s now like a married woman. She’s more mature in her color palette, she’s more complex. 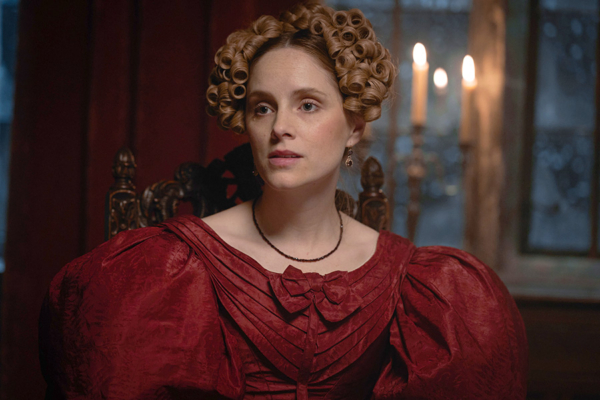 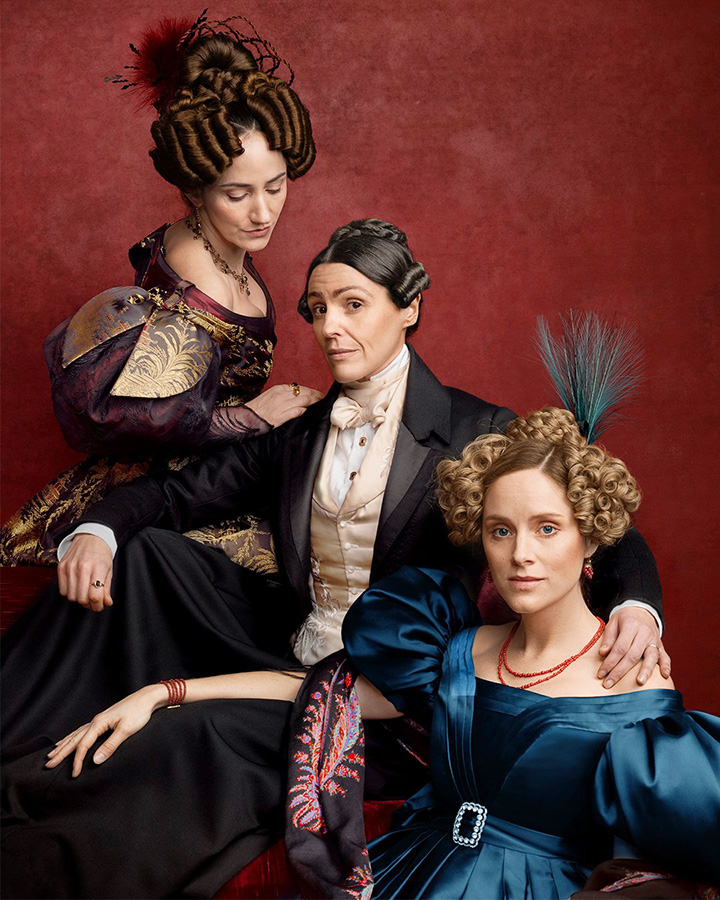 Tom Pye: I also was thinking about what effect on the Shibden residents Ann Walker moving in would have. So I had quite a bit of fun with Marian Lister about how she would be affected by a feminine woman like Ann Walker entering the house and how that might change the way she looks as well. 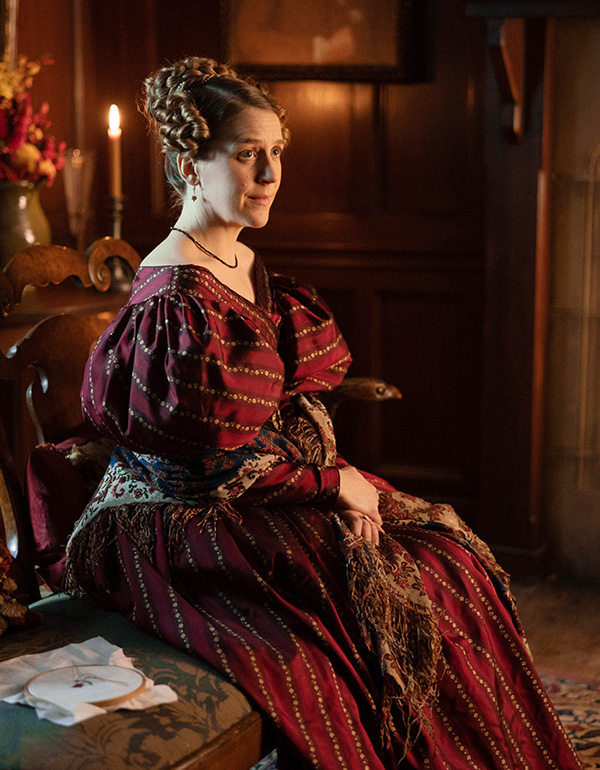 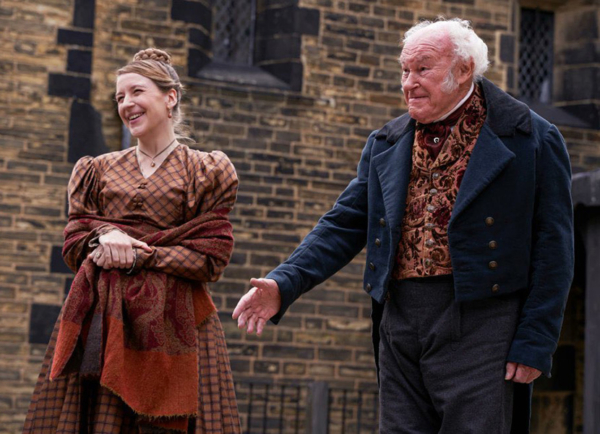 Frock Flicks: One character who has a larger role this season is Mariana and she has some amazing outfits…

Tom Pye: She is my favourite one to dress. I just like that character and the sort of opulence and the arrogance of her. So her color palette was more lush and darker and richer. I really let rip on Mariana, and Lydia is great to work with. I mean, I couldn’t wish for a better cast to work with. 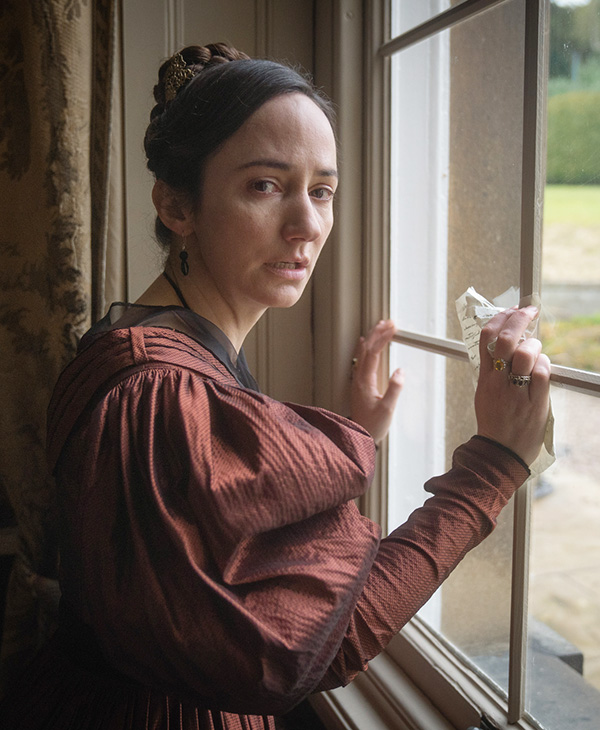 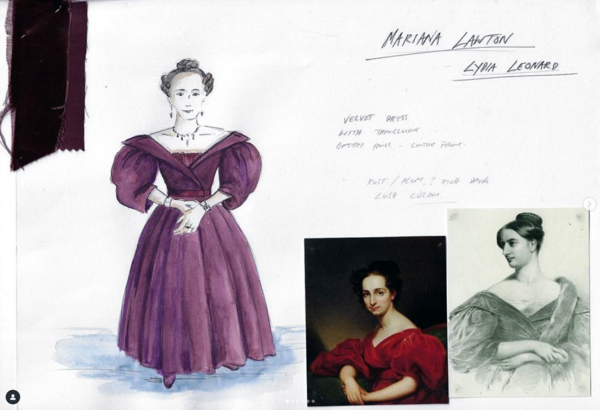 Tom Pye’s sketch for one of Mariana’s dresses, posted on his Instagram. 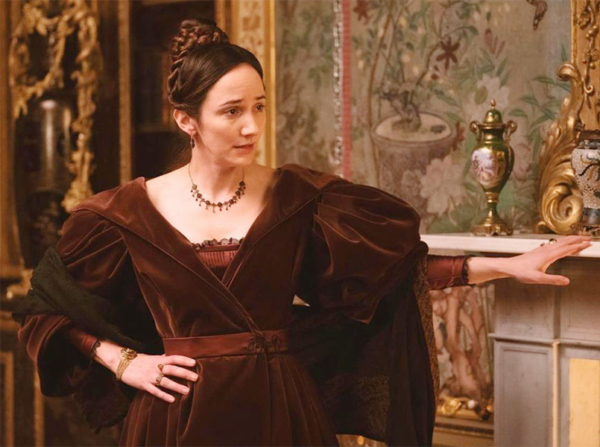 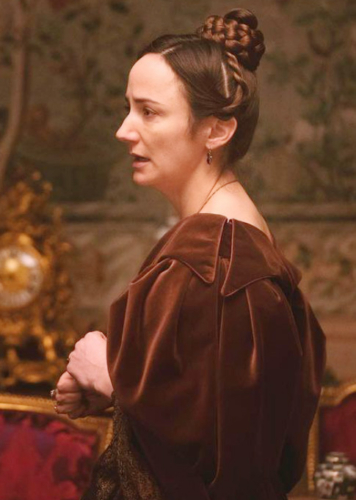 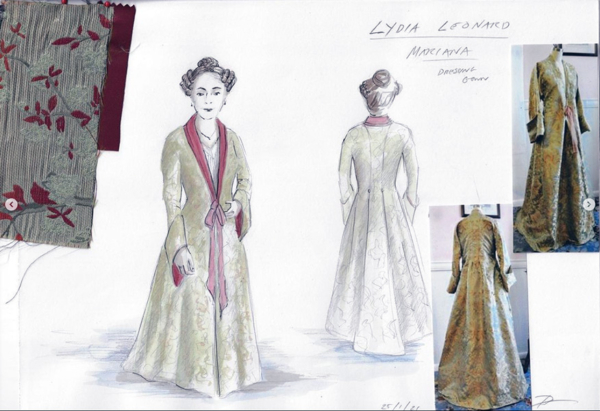 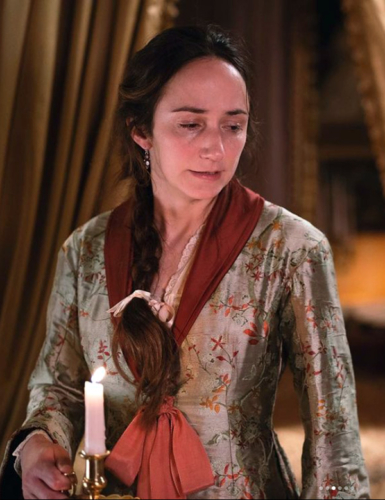 Frock Flicks: Any other new or expanded characters that you had fun with?

Tom Pye: Tib was fun. Tib’s an all new character who pops up in episode two and a little later. Lovely actor to work with. Larger than life figure, very famous in the diary. That was quite challenging because at the end of season one, in one of the scripts, Tib turned up, so I’d already started designing her.

From the diary, she’s described as very outdoorsy, sort of a woman you’d imagine dressed in tweed these days with a shotgun over her shoulder and pheasant in her hand. She was an outdoorsy, country type. But we meet her for the first time in a French high-class restaurant. So that was quite a challenge to think how do I get across who this woman is when I have to meet her in evening wear in Paris and then in the Louvre the following day. 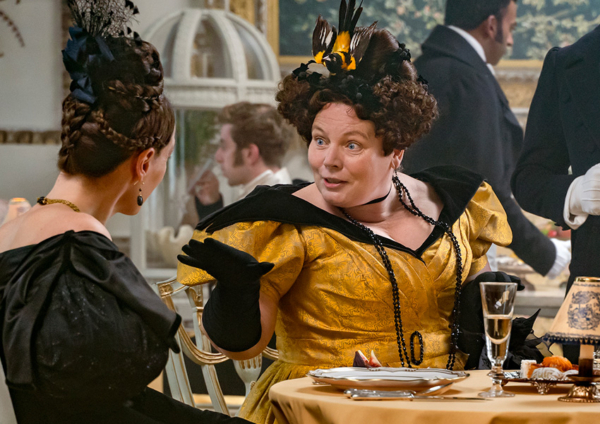 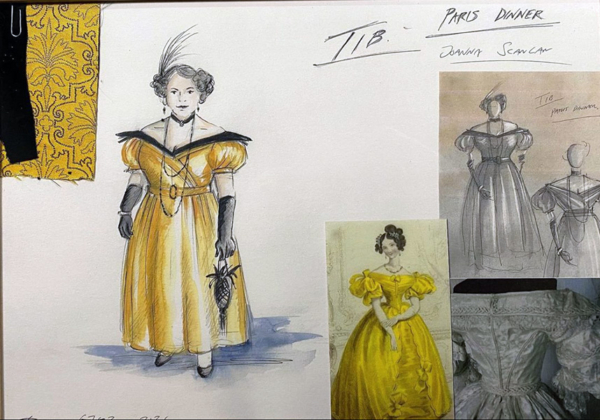 Tom Pye’s sketches for one of Mariana’s dresses, posted on his Instagram.

Tom Pye: In the Louvre, I could get a sense of that sort outdoorsy-ness, so I gave her a kind of earthy palette. I think there’s a half a pheasant wing in her hat and various bits of dead animal hanging off her. And a whole bird in her hair in the restaurant. We just went for a really bold color palette to give an idea of this woman who really doesn’t care what others think. 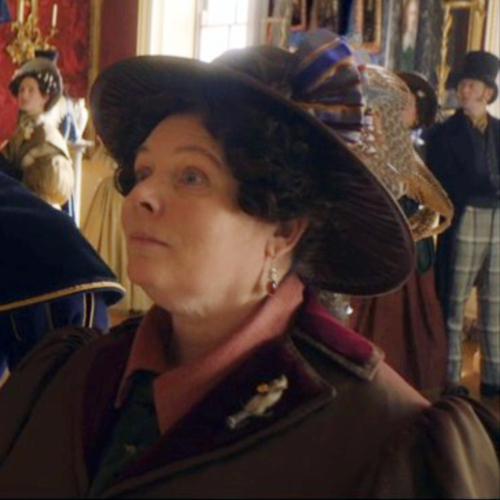 Pheasant on her hat. 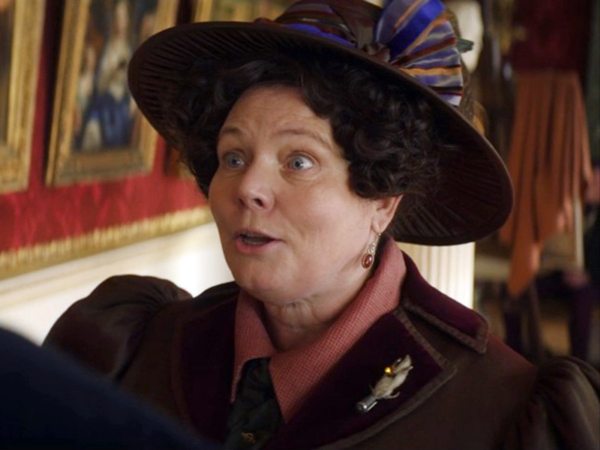 Some kind of jeweled animal paw pin on her collar.

Tom Pye: We only finish this season in 1835, I think, so there’s still five more years of her life available. I have no idea if there is another season, but she wrote six million words so there’s a lot of diary left to go and more travel and all sorts of stuff that goes on.

Frock Flicks: What else are you working on, if you can say?

Tom Pye: Another Sally Wainwright project, The Ballad of Renegade Nell. It’s set in another obscure period, which I’m thrilled to do. And typical Sally, it’s got people from the lowest walks of life right up to the aristocracy to the queen, which is great fun for me because I get to do all stratas of society. It makes for really interesting costuming and contrasts.

What do you think of the costumes in season two of Gentleman Jack?