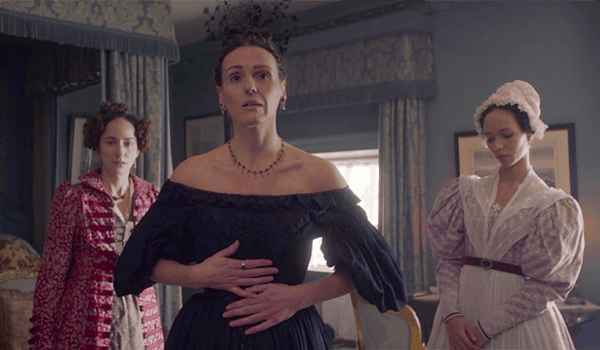 It’s the penultimate episode! We got some great costume changes, a lot of babies, one hilarious scene, and a heart-breaking ending. I hope this wraps up nicely in the next episode, and we don’t get strung out till season two — THAT would be awful!

Thomas, the new groom has arrived. Marian checks out his package. She has a taste for the lower classes doesn’t she? “He has a lovely face,” Marian remarks. But it’s not his face she was looking at.

Mr. Washington gets a visit from Thomas Sowden in his Sunday best — which doesn’t look a lot different than his everyday clothes, just cleaner, I guess. Noticeable that the Washington house is much finer than the Sowden’s. It’d be a step down for Suzannah in social class.

He asks for Suzannah’s hand in marriage. Apparently it’s been two months of courting, and he says Miss Lister will like him getting hitched.

Marian and the new groom come back from shopping, and she’s freaked out about shit Rawson’s saying. First about Shibden’s deeds and then about Mr. Abbott being engaged to another lady. Anne deduces that Rawson was trying to get estate info out of Marian. Good side-view of Marian’s hair. Appropriate to the period, but not as fancy as Anne Walker & the Rawson ladies.

Anne’s off to pick up a carriage in York. She meets with Dr. Belcombe, asking if Ann Walker had written for medical advice. Her sister did but gave only the briefest of details. They have a few pointed words about Dr. Belcombe’s sister. And his prescription for Miss Walker is “kindness, love.” Note that Anne only wears those spats (seen in the show’s credits) when she travels. She doesn’t wear them at home or walking around town.

Back at Shibden, Dad says Rawson was probably drunk when he said that shit to Marian. Anne suggests inviting him to Shibden. “If he can play dirtily, so can I.” So Jeremiah Rawson arrives and barges his way into the drawing room. But his dog has to stay in the carriage. *pout*

He and Anne trade barbs. She stands up for Marian, while Rawson is a grade-A jerk. He complains that his mom likes Anne. She comes out and accuses him of stealing her coal — and running the Hardcastle cart off the road.

Washington does more maths to figure out if Anne can sink her own coal pit without Walker’s money, while also going off traveling. She figures on taking out a loan with the deeds to Shibden as security. Doesn’t seem smart to me, but what do I know?

So off she goes. Anne gives her travel itinerary to her aunt — first London, then Paris, then elsewhere. She asks Aunty to write to Miss Walker’s sister occasionally, just to check in. Aunt Lister seems pretty upset by Anne leaving, & Marian also warns about calling Anne if Aunt’s health declines. Between all this foreshadowing & what I know of the history, I don’t think dear Aunty is long for this world.

One more task, Anne asks Marian to take Dad and stick up for Thomas Sowden’s marriage to Suzannah Washington so as to get a tenant married. Can’t remember if we’ve seen this green dress on Marian before, & I don’t think I’ve screencapped it, so here ya go.

She also tells Dad about the coal pit (not the loan), saying that her leaving is a good cover so the Rawsons don’t suspect her being up to anything.

As Anne leaves, we hear the older maid telling another maid that she’s warned the new groom off from Eugénie so we won’t get knocked-up two, electric boogaloo.

Off in Scotland, Ann Walker is sketching pictures of Lister and realizing that little kids are noisy AF. Always on my mind… Looks like she’s wearing a middy blouse with a skirt, & while I can’t say this was never worn in the 1830s, it doesn’t strike me as totally of the period. But it’s awfully late on a work night for me to go researching that — feel free to comment if y’all know better!

Capt. Sutherland has invited his bad-with-money cousin Alexander Mackenzie to dinner. ‘No pressure” to hook up, but really pressure. Ann’s sister is doing a great job of making motherhood look tedious! So much whipping out the boob to feed a squealing babe, attempting to break up fights between other kids, & the whole house littered with child paraphernalia. Ann, join us in the happily childfree world!

Anne carriage off to … not sure where but the Lawtons live there. Groom is a clumsy oaf to Eugénie. The print on her gown reminded me of the dresses Tom Pye made for To Walk Invisible about the Bronte Sisters. While I don’t have pix of that exact one, maybe it was still a recycled costume? Anyone have a DVD or screencap to confirm? Tom, are you reading?

Charles Lawton is leaving for his nephew’s funeral, but his wife, Marianna (Anne’s former lover, who visited Shibden in ep 1) is staying here. Well that worked out for right now. Lovely dark purple-ish brocade gown. Marianna has a more elegant hairstyle with less of the bouncy curls & more of the structured height, probably because she’s older than Ann Walker & her Rawson friends, but younger than Mrs. Rawson or Mrs. Priestly.

They have sex, of course. When questioned, at first Anne blows off her relationship with Walker as “just something to do.” Even though she’s teary. “Is she very rich?” Marianna semi-accuses. Anne demurs, saying she thought Ann would really marry her. Marianna reminds her that she was supposed to be married to Anne first, though, of course, that was kinda sorta nullified by Marianna’s marriage to a man. Marianna joins Anne in her travel to Oxford and on to London. A new toque-style hat for Anne, plus a Russian cossack coat edged with fur.

But Marianna brings up her future when / if her husband dies. The nephew who died was her husband’s sole heir, and she suspects she won’t get anything from her husband’s estate. Looks like Marianna was still hoping to come live with Anne at Shibden as her backup plan because ‘that’s what we’d always said.’ They bicker while Anne holds a giant thermometer and at one point Marianna asks, “why’d you bring that” (there’s the name of the episode and the most meme-worthy bit!). The shots of Ann in this scene are framed by other people or furniture. She’s being distanced.

Capt. Sutherland tells Ann she should be at the table when Mackenzie visits. She’s even more un-thrilled. Is her sister sad for her? Or complicit? Hard to tell.

At an overnight stop, Marianna and Anne quarrel, bringing back past arguments. Marianna complains that Anne used to dress even more masculine and people would harass them both about it. Desperate, Anne begs Marianna to live with her at Shibden now.

Nighttime in Scotland, and Ann looks at her sketches. Her sister comes in to say goodnight. Ann says she won’t marry Mackenzie. Sister says just to go along with dinner, and there’s a hint that her sister has acquiesced to things in her marriage ‘for the children’ that aren’t too pleasant (can’t tell if it’s as bad as domestic violence, but it’s not a happy house there in Scotland). Ann wants to go home, and I don’t blame her one bit. What is her sister setting Ann up for?

In London, Anne visits Vere Hobart (the ex-lover whose wedding she attended in ep 1), who now has a baby. They talk travel, and Vere suggests Anne visit her half-sister Lady Harriet in Copenhagen. Sounds like a jolly idea, and judging from the preview of ep 8, that’s gonna happen. At least this baby is quiet.

Back at her lodging, Anne has received cards from several ladies including an invitation to dinner with Lady Stuart at Richmond Park. Marianna seems astounded. Maybe jealous? Marianna wears this red print pelisse over other dresses indoors a lot, like a dressing gown.

Eugénie dresses Anne in a black evening gown while complaining that the groom doesn’t talk to her. Lady Stuart prefers ladies in low-cut gowns at dinner. Her hair is in a braid across her forehead & a braided bun topped with a feather spray. I lightened these images to see more details, like the black velvet bow at the back of the neckline & the smocking at the top of the sleeves.

She leaves Marianna since she wasn’t invited. Nyah! Mr. Washington visits the Sowden farm, and Thomas is good to go on the marriage deal. There’s still a hint about WTF happened to CrazyDad, so obviously that’ll come back to bite Thomas in the butt. But not worth screencapping.

Breakfast the next day, Marianna pokes the bear. ‘You haven’t mentioned Miss Walker’ and ‘what do you get out of these London people.’ Marianna suggests that these friends see Lister as a freak. Marianna wore this yellow gown in a previous episode.

Anne is being very high and mighty about her London set — she is a social climber, but Marianna definitely has the right words to aggravate her, having known Anne for decades. Just as their fight intensifies, Mr. Lawton arrives, and Anne exits.

In Scotland. Ann Walker is distraught … calling to Anne Lister through her mirror … In her London room, Anne Lister looks in the mirror … contemplates Ann Walker … she hears the Lawtons arguing downstairs. In Scotland, Ann has clutched a glass so hard it breaks and cuts her hand.

In London, Lister strides out to her carriage and nearly tells Eugénie and John that we’re going to Scotland. But instead, she says Paris and NOW.

In Scotland, Ann is bloody from cuts… Yikes! What will happen when the final episode airs next Monday?