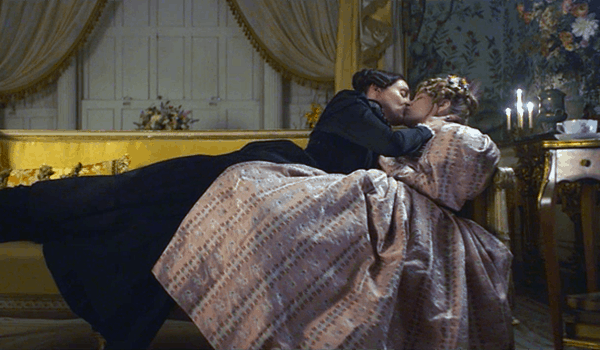 Ooooo, this was a fun episode! Most of the costumes were repeats, but we ended with a good sex scene and a murder, also, less coal talk, so I’m calling this a win.

Unfortunately, we don’t get to see Anne Lister busting into Ann Walker’s trip to the Lake District — we hear reports of it. Starting with Mrs. Rowsen and another daughter (not the one who went on the trip, IDK why), who visit Miss Walker.  Mom Rowden is surprised that Lister joined had joined the party. Cue Lister’s eyebrow waggle at the camera. What-ever! 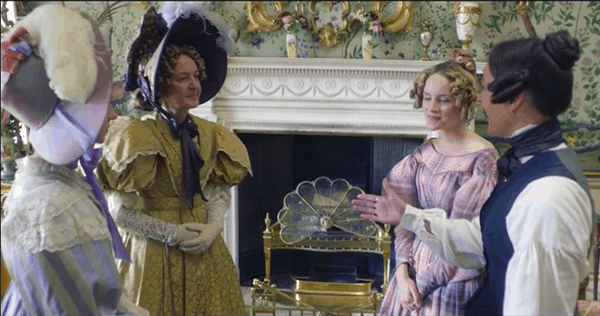 Seeing Lister among these ladies in their fashionable 1830s gowns reminds me of what costume designer Tom Pye said in our interview — he wanted to ‘make the straight people look daft’ in comparison to Lister’s simple black outfits. Totally works! 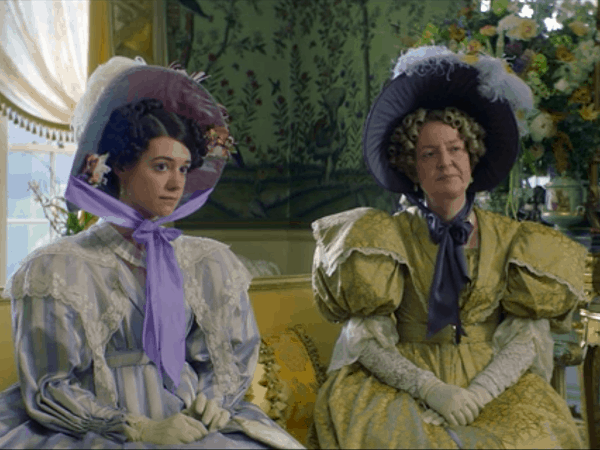 Lavender stripes on the daughter, bright yellow tonal print on the mother.

Back to the Shibden servants, John’s going to propose to Eugénie, by proxy since he doesn’t speak any French and she doesn’t speak any English. He’s doing her a solid so she can pass the baby off as his. The other maid does the translation, and Eugénie just agrees, “Oui,” with a peck on the cheek, it’s done. More about that later… 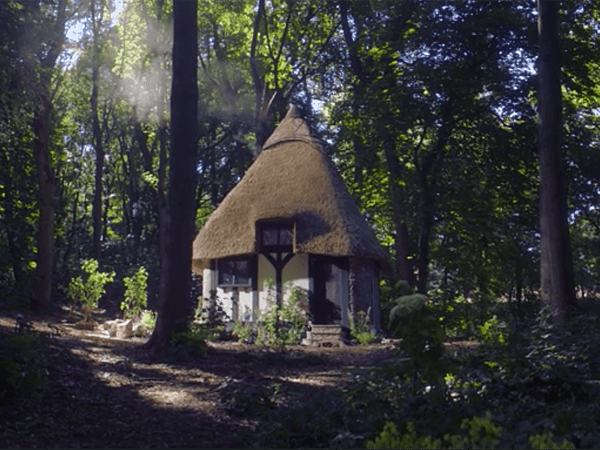 Lister and Walker are walking through the woods and come across a storybook cottage, which is apparently Lister’s love shack baaybeee. Walker gets back to the kissy talk from before the Lake District … OF COURSE she’s into it. Just needed to think about it a little, y’know.  Lister is divinely tender with her mwah 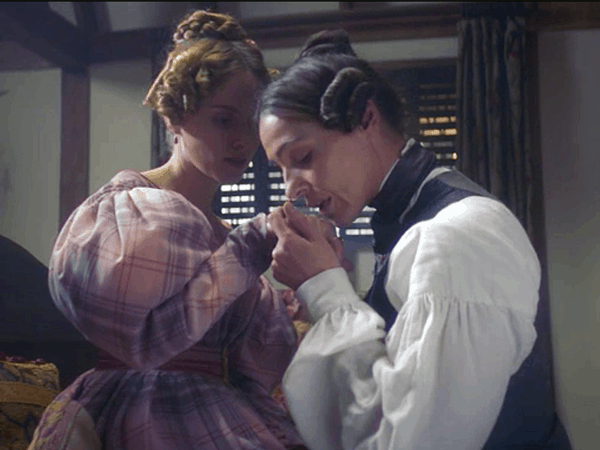 Walker wears the pink plaid gown that we’ve seen in every episode a lot in this one.

Back to the servants. John asks Marian to ask her sister for permission for the deal, because it won’t go over well. 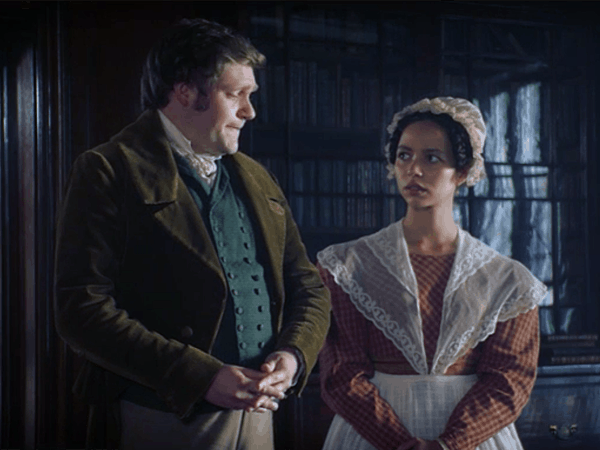 Lister and Walker go back to Walker’s house, where that first kiss seems to have sealed the deal. Lister asks Walker to pay a formal call on her aunt. Walker asks Lister over for dinner and then for a sleepover. Yaassss, girl, get it!

I guess it’s suddenly late, because when Lister returns to Shibden Hall, Marian is throwing a fit that it’s ‘past 10 o’clock,’ and the servants had to wait up (um, I’m on Anne’s side, they’re servants, that’s what they’re paid for, get over it, Marian). Marian also whines that their aunt has been sick, but really, it’s an upset stomach, not like she’s dying. Marian, take a fucking chill pill.

So Lister tells her aunt how she has a new girlfriend, a ‘companion for life.’ Aunty is the bestest and asks meaningful questions but isn’t disapproving on the whole. She’s just worried about small-town jerks being jerky to Lister. 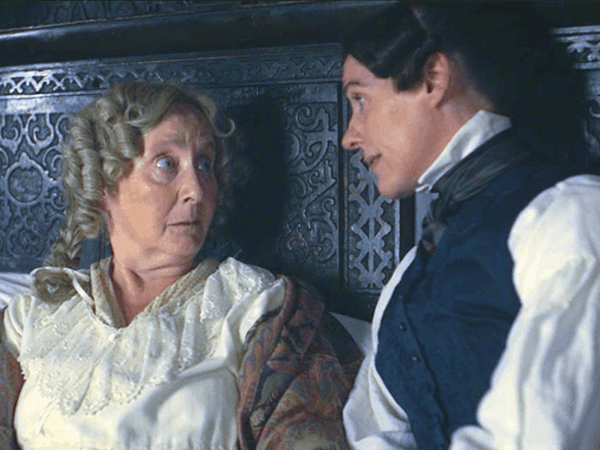 At breakfast, Marian chides Anne for reading at the table and for being late last night, still. Dad says ‘it was only 10 o’clock, NBD’ and tells a story about Anne playing cards with a bunch of rough fellas. 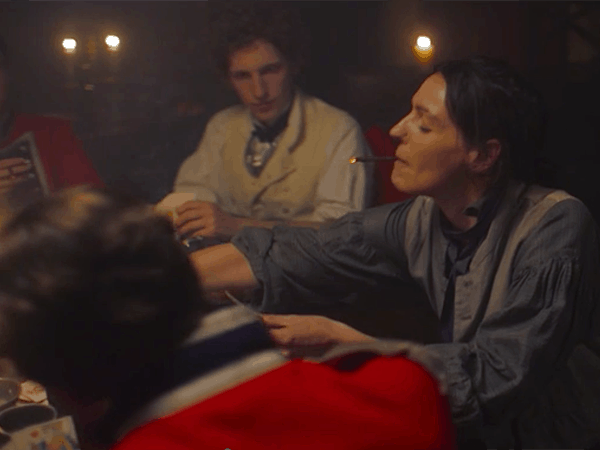 The most casual Lister has been shown — in blue shirt sleeves & waistcoat, smoking, without her hair curled. She seems to indicate this was long ago.

Then there’s Marian rant about being ‘cheated out of what’s half hers’ and how she should get married a have a son who’ll have a greater claim to Shibden than Anne. Finally, she storms off to stay with friends. And good riddance! 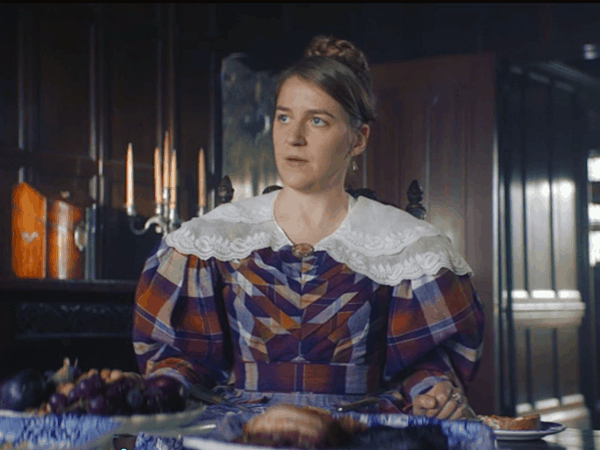 Same old plaid dress, but without lace covering up the intricate work on the front, so worth a look (even if the character is annoying AF).

Lister goes off to chat with her tenants, but finds this guy Sowden is drunk. She tells him to go home, he insults her, calling her a man. His son Thomas takes him back home. 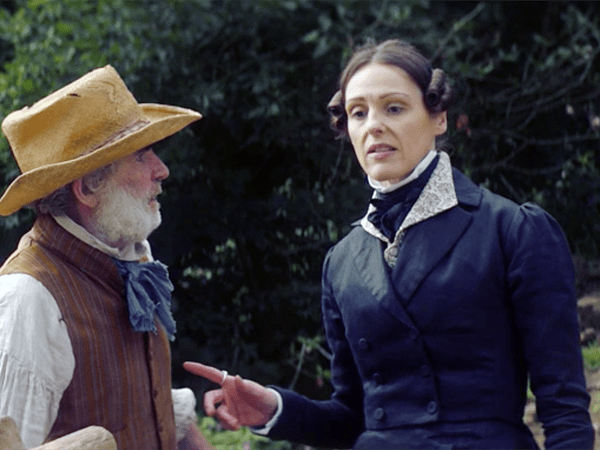 Back at Shibden, Christopher Rawson wants to make a deal about coal prices with Lister. This, btw, is the less posh, not quite as smart brother. They make a deal. 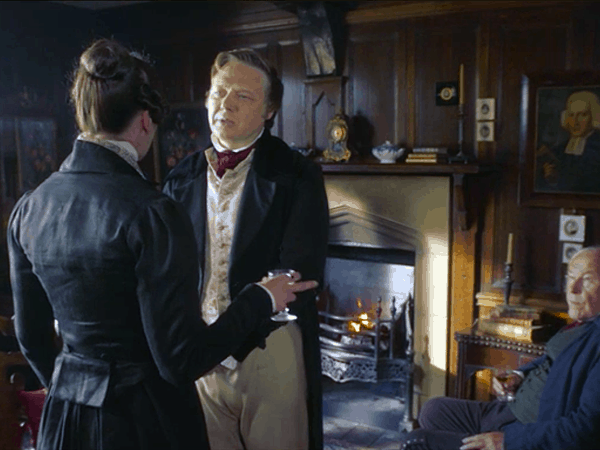 Same jacket on Lister, from the back, notice the short tails.

At Sowden’s pig farm, the drunkard is an asshole to Thomas, the younger kids, his wife, y’know, everyone. They fight. The older son ties him up and sticks him in the pig stye. 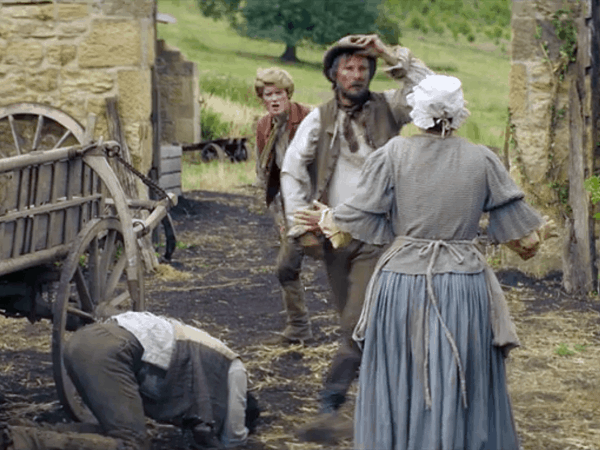 Much like the servant’s side plots, this is a bit tedious & nowhere near as interesting as Lister.

At Lister’s love shack, the tin roof is already rusted because Lister is canceling Walker’s formal call to her aunt because of her illness and ditto with the sleepover, so dinner only. sad trombone Even worse, Walker was sent an nasty anonymous letter about Lister! 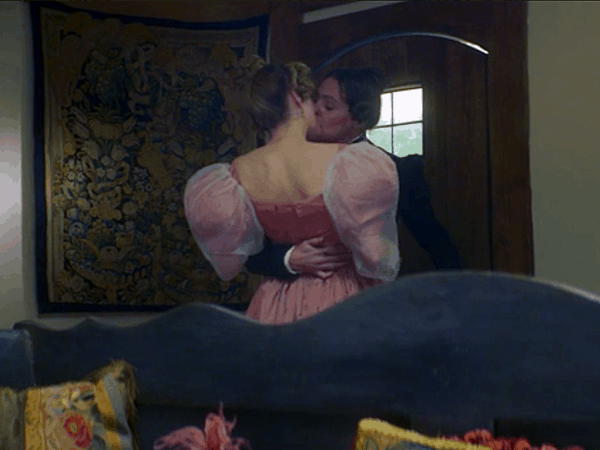 Walker hasn’t worn this pink gown with sheer over-sleeves since episode one.

Marian mentions John and Eugenie’s engagement to Aunt Lister, and Aunty questions whether Marian would ever get married herself. Marian says she’s ‘been invited to tea’ with a John Abbott twice at a mutual friend’s house. Because that’s what passes as a hot date for a spinster in the 1830s. 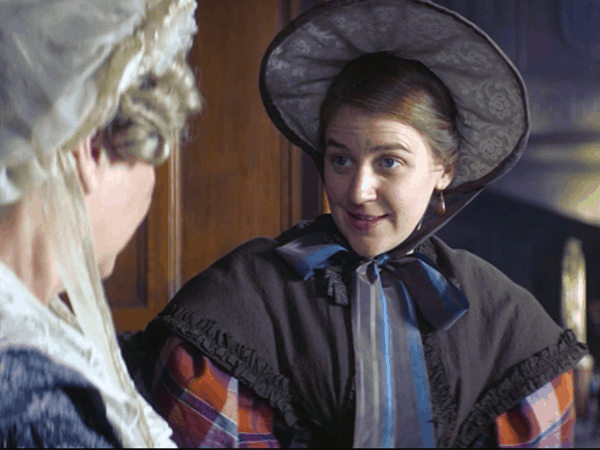 Spicing up Marian’s look with a black capelet & a bonnet. Now GTFO!

Lister looks at the shitty anonymous letter, and Walker assures her that she doesn’t believe what it says. As she leaves, Lister questions the footman about that episode one carriage accident. Dun dun dun, he says the driver was Mr. Rawson! 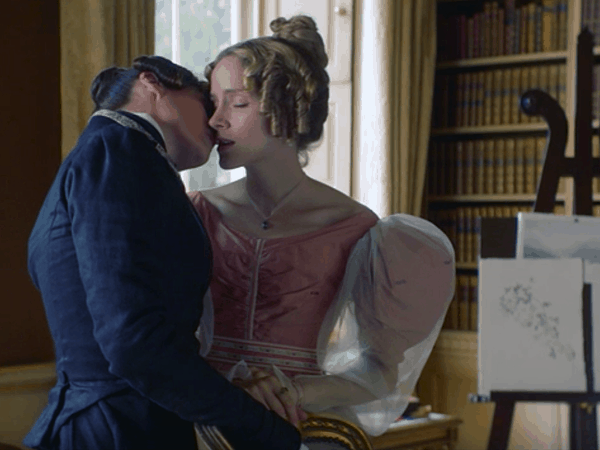 At the bank, both Rawson brothers (and the dog) discuss the coal deal with Lister, but Christopher got it confused, and his bro is kinda pissed. 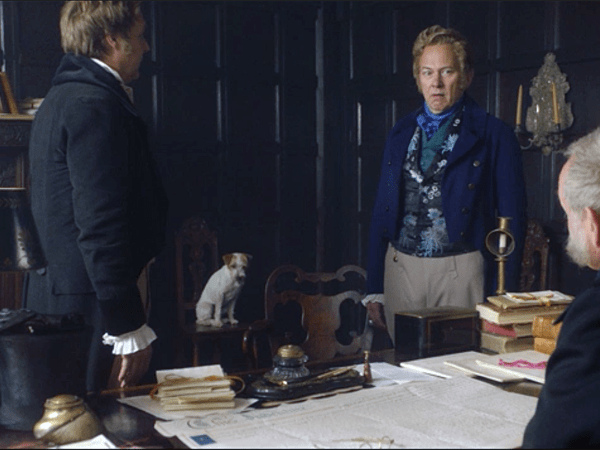 Willie, the dog, is clearly running this business.

The letter reveals people are assholes (because we needed hard proof?). 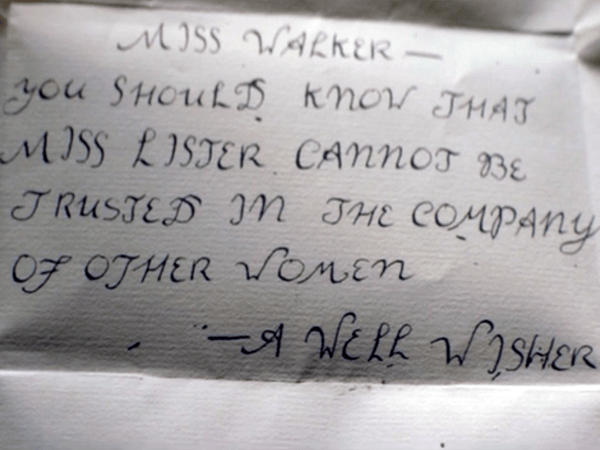 “A well wisher” — more like a homophobic small-minded twit. 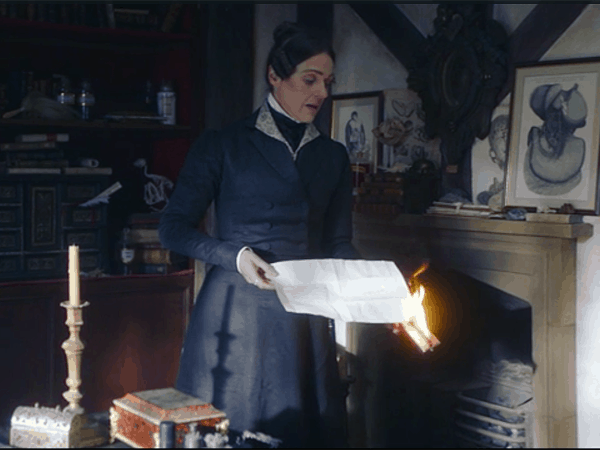 Putting out that trash, Lister still has a hot dinner date. As she gets dressed, she receives a note from the Rowdens saying the coal deal is fucked up, but she shoves it in a drawer. Ain’t nobody got time for that when love calls! 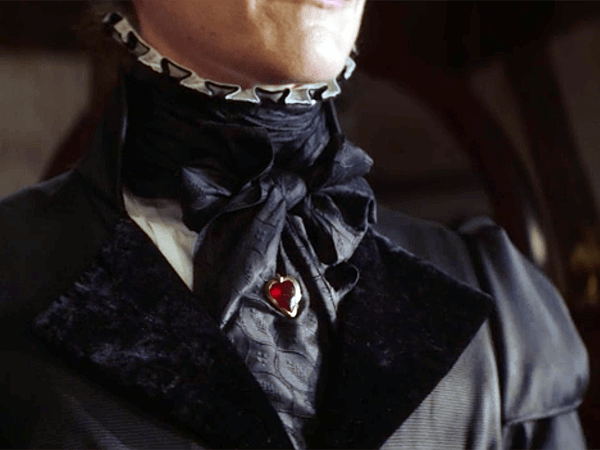 Close-up shows an elegant weave in her cravat & velvet lapels on her coat. 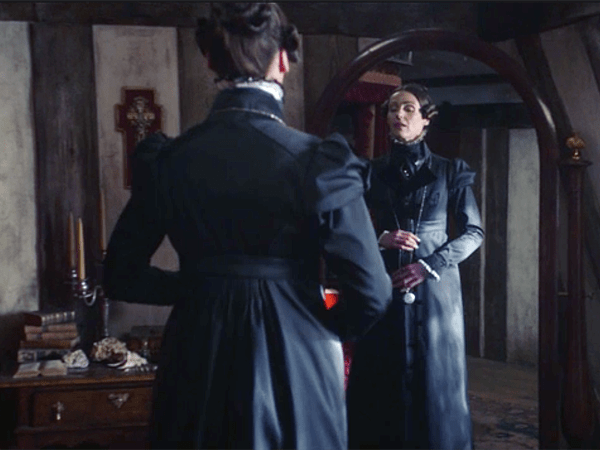 This is one of her few long coats, kind of an older, Regency style.

At dinner, they talk about traveling to Switzerland sooner rather than later. On the couch, Lister proposes living together, which Walker says “it’s like a marriage?” Walker waffles a little bit and postpones six months, calling it a ‘proposal’ until April 3, Lister’s birthday, saying “I think you have every reason to hope.” 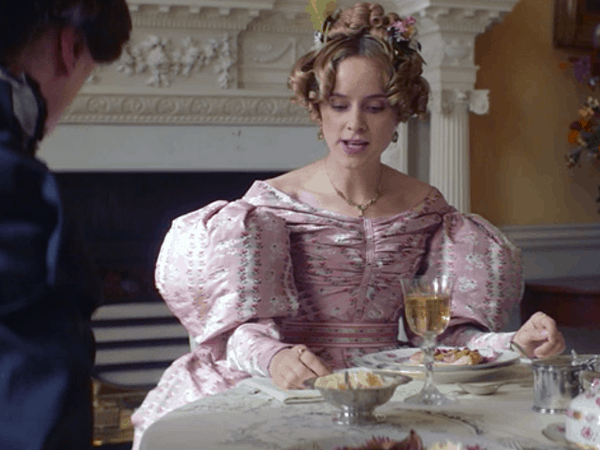 Aunt Lister had sent John out to walk Ann back home, and John gets the house wrong, calling at the Mr. and Mrs. Priestly’s house first. This puts a bug in Mrs. Priestly’s ear about Lister and Walker…

Meanwhile, back on the couch, Lister is feeling up Walker, but can’t get past first base. Walker asks if she’s done this before, Anne says, “of course not” and looks at the camera. Walker asks, “What are you looking at?” I LOLed! 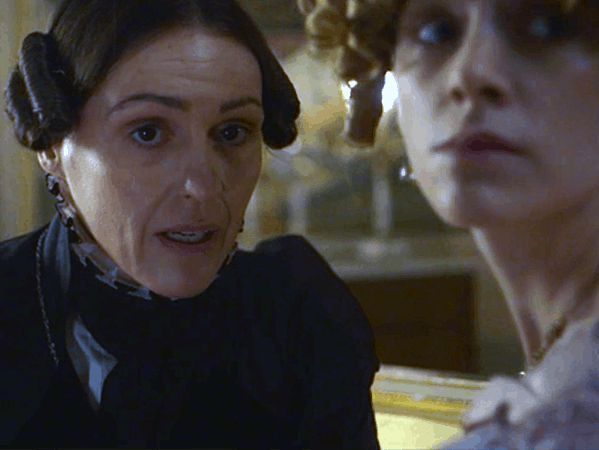 But also, I think when Lister breaks the fourth wall and talks directly to the camera, it is reminding us that this series is based on her diaries. It’s as if we are watching her memories come to life. We’re looking inside her head, much as we do when we read her diaries (and if you haven’t, I highly recommend reading them — there are several published versions that transcribe her coded diaries, plus biographies, even a tie-in book with this miniseries that includes portions of her diaries). 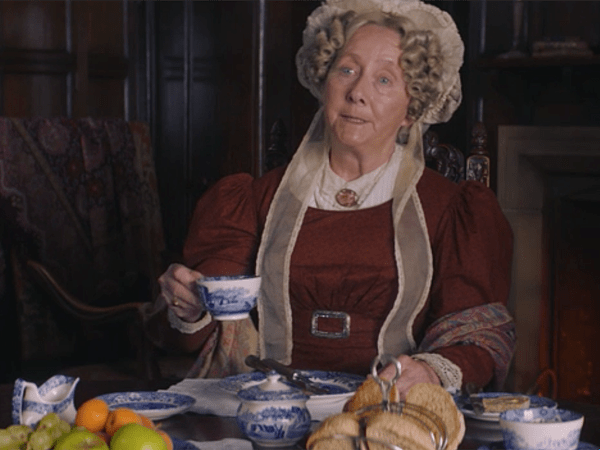 Aunty has a new red-brown dress!

The next day, Aunt Lister tells Anne about Marian and her John Abbot. Apparently, he’s in trade, making carpets, which the snobby Anne looks down on, since the Listers are landed gentlefolk. Dad doesn’t care either way.

Last night’s visit has got Mrs. Priestly wondering if Miss Walker is ill. Maybe she’ll pop in. Wouldn’t want to be a busybody, but… 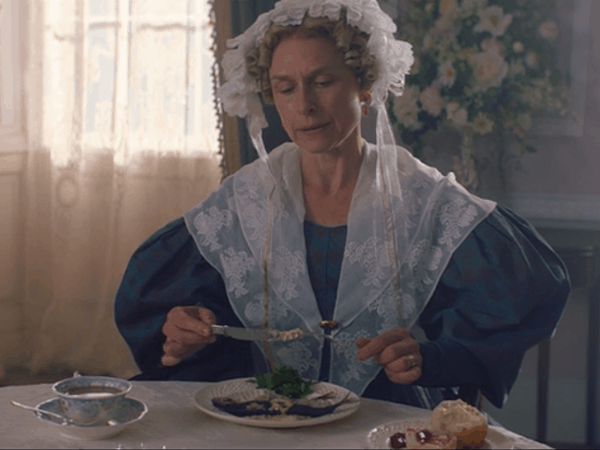 She’s in a different blue-ish gown & so much lace.

Lister sees Thomas Sowden at work and reminds him that she needs to talk to Mr. Sowden. Thomas tries to take his dad’s place, but Lister reminds him that the tenancy is with dad. This is gonna get awkward. 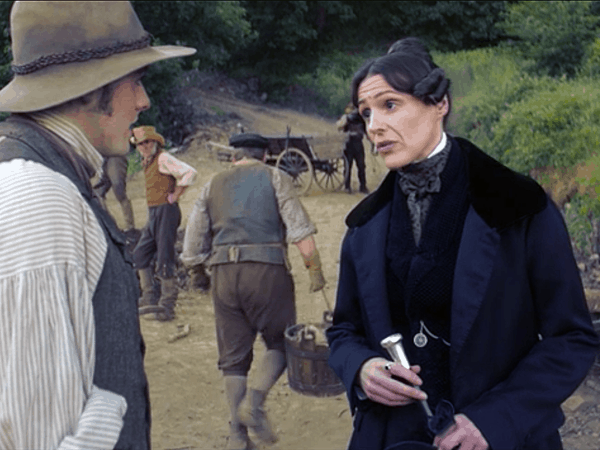 After attending to business, Lister goes to find Walker in quite a state — she’s feeling insecure about herself, getting down about not getting down. Don’t worry, honey! You’ve got till the end of this episode. 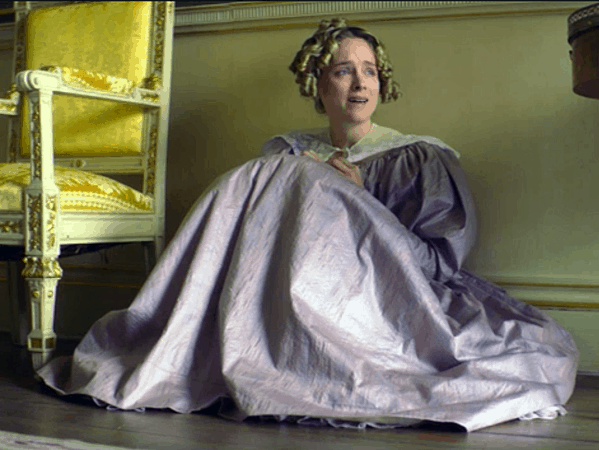 Ugh, back at the Sowden pig farm. Thomas tells mom that Lister wants to see dad. Mom takes the little kids into town so Thomas can set the crazyman loose. But instead, he slits dad’s throat and lets the pigs eat the carcass. 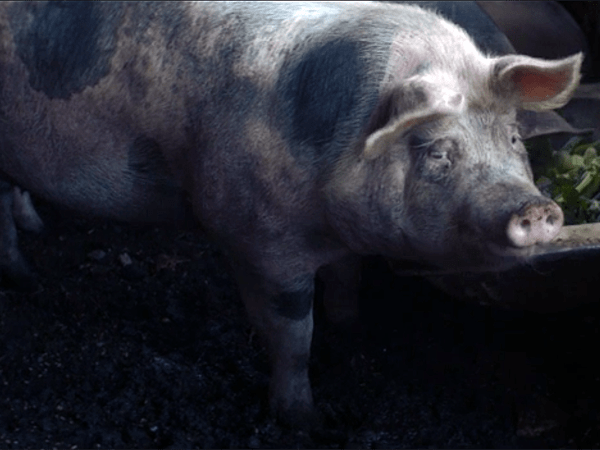 Mrs. Priestly goes to check in on Miss Walker but notices the blinds are down, so she calls up the footman to bust in… 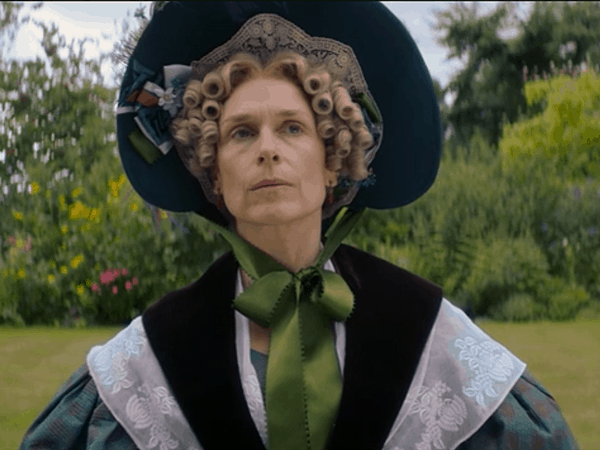 I don’t want to be a busybody, but I’ve got my busybody bonnet on.

Lister and Walker are GETTING IT ON. Walker says, “I love you.”

Mrs. Priestly walks right in on them!  Walker says, “I wasn’t feeling well, and Miss Lister is taking care off me.” Mrs. Priestly exclaims, “Oh is that what you call it?” (and that’s the name of this episode). She storms out. Walker giggles and says to Lister “shall we go upstairs?” And they continue in bed :) 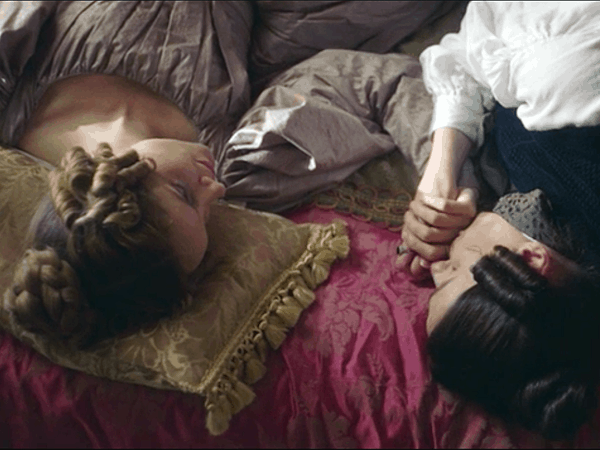 Was it good for you too? Tune in for episode 4 next Monday!