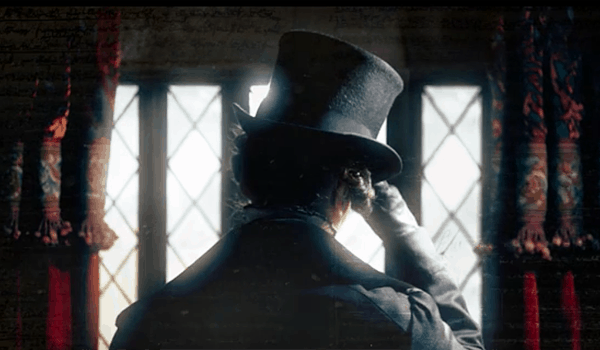 I’ve been studiously avoiding the scads of reviews for Gentleman Jack so I wouldn’t have other people’s opinions clouding my own. It’s not so much spoilers — as we always say, there are no spoilers in history, plus I’ve read the diary — but I didn’t want The New York Times or even The Mary Sue‘s point of view influencing me or feeling like I had to state a rebuttal to them. So here I go!

First off, I love how Episode 1 is coyly titled “I was just passing.” For those not in the know, “passing” is a term for being seen as a member of a more socially accepted class when you are actually part of a socially inferior class. In this case, we see a lesbian woman, Anne Lister, passing for heterosexual, but with the double meaning of Anne just physically passing by her new neighbor.

This episode is very set-uppy, as expected for the first of a miniseries. It’s all about Anne Lister hearing about Ann Walker and vice versa, until they meet at the end of the episode. Also, Anne’s estate, Shibden Hall, has coal, but that’s just touched upon. There’s one sex scene and a horse gets shot, but neither are explicit. There’s a carriage accident ,a autopsy, and some puking, which are more explicit. Alrighty!

We start with carriages — Miss Ann Walker and her aunt’s carriage, the Hardcastle’s cart (they’re new tenants at Shibden Hall), and a mystery carriage that runs the other two off the road, causing a crash that ends up with the Hardcastle’s little boy losing his leg. 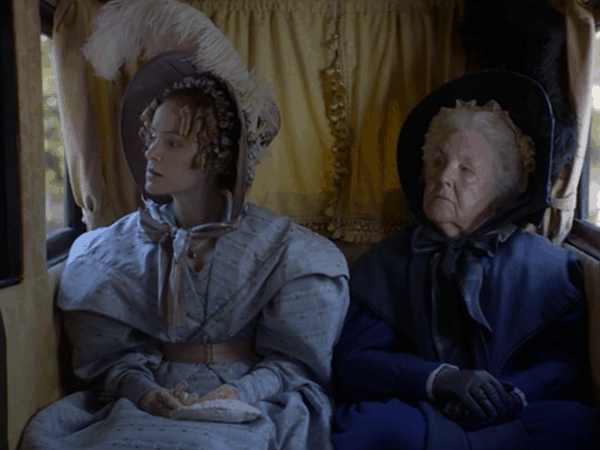 Before the crash, Aunt Walker says of Shibden Hall, “The Listers don’t invite people, they’re all a bit odd.” The Walkers do get a hasty invite since their carriage has crashed though.

Marian (Anne’s younger sister) in a smart plaid, as she rushes around to help with the injured boy & unexpected guests.

Anne Lister is not yet present, but everybody talks of her. Aunt Lister says Anne had ‘set up home’ with Miss Vere Hobart in Hastings, and goes on about how “England is barely big enough to contain her.” Anne’s sister, Marian has a bee up her butt about how notorious Anne is. Ugh, this is why I’m glad I’m an only child. 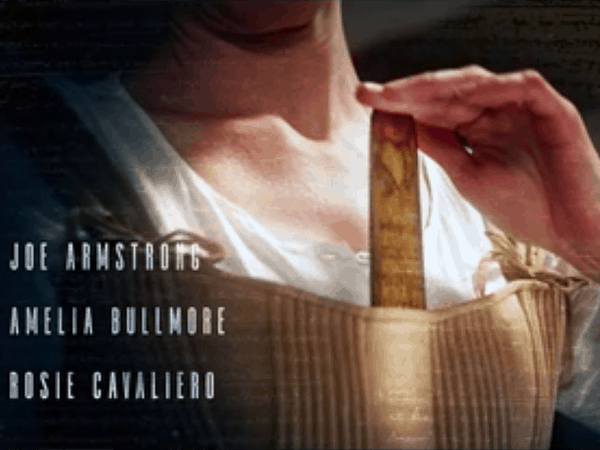 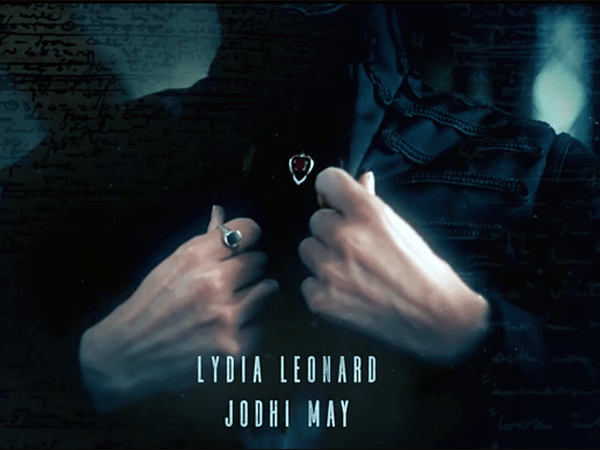 Here’s another carriage, Anne Lister is driving it, careening through town. Something about the driver getting injured and nobody else could take over, blah blah blah, just an excuse to show off, Anne. As a haughty male passenger says, “that was a reckless undertaking.” Anne rebuffs him.

Anne has brought along a new French lady’s maid, Eugénie, who’s wearing a sassy chartreuse gown, but is feeling a bit pukey. 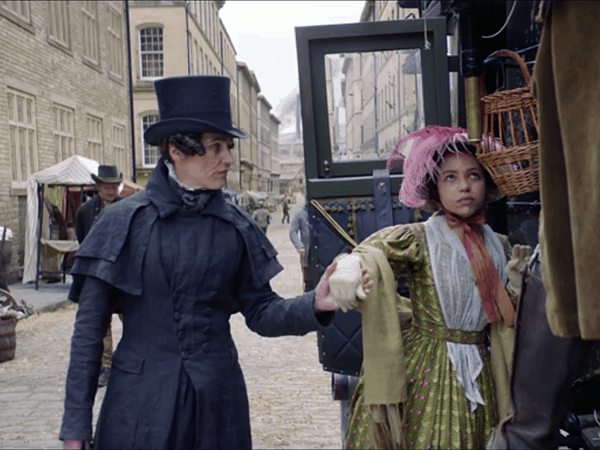 Anne addressed the camera directly, “Must be my driving.” It’s a fun touch, modern, yes, but not obnoxiously so. Likewise, I should mention the soundtrack. It’s not strictly historical, but it’s not identifiably modern (as in, no pop/rock songs). But it has a lively beat, which emphasizes the quick pace of the story. As a good soundtrack should do. 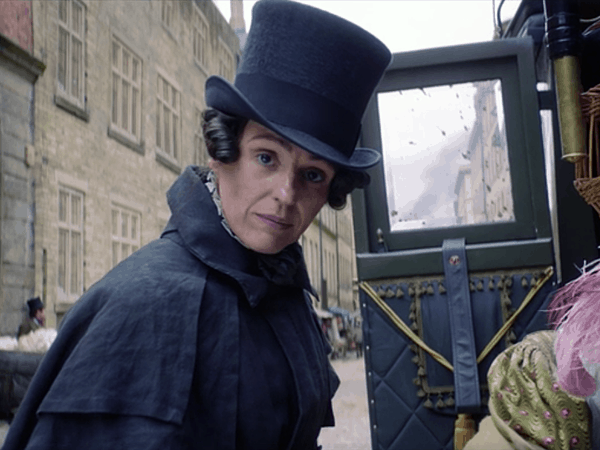 Anne heads home, with some inner contemplation — “I’ve been an Icarus, I’ve flown too close to the sun. Now I’ve crashed back to earth at Shibden, shabby little Shibden and my shabby little family.”

Her family peppers her with questions about what went wrong in Hastings, she tells them nothing. They ask about what happened to George, the groom, who got shot out of a tree and was killed. That, she’ll talk about because she likes gory stuff. 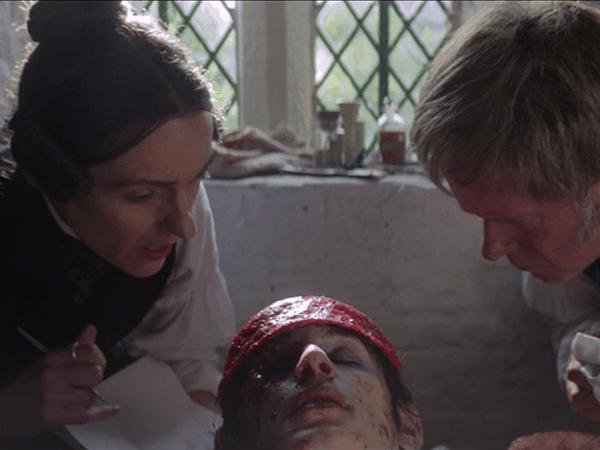 Anne’s flashback is, in her words, “fascinating!”

In other news of their servants, Mr. Briggs, who I guess manages the estate, has dropsy and is about to keel over dead, so he can’t collect the rents. Anne’s father can’t do it because partly deaf and doesn’t have a head for business. So Anne says she’ll do it, natch. 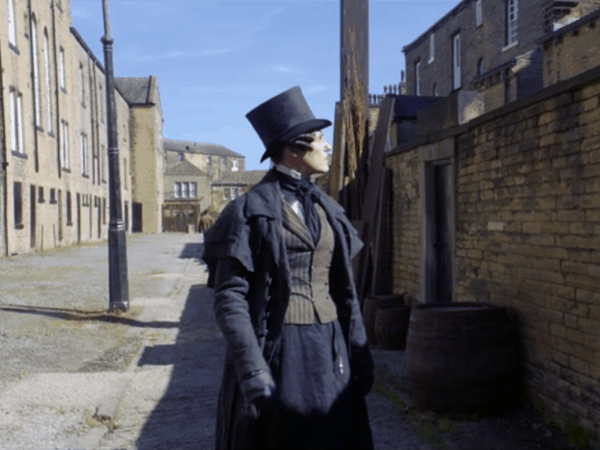 She goes off to visit to Mr. Briggs, who has a gruesomely massive leg injury. Anne asks for the records necessary to collect the rents. Briggs mentions to her that Shibden’s land is rich in coal, and it “makes no sense in letting it sit there.” Duly noted.

Meanwhile, Eugénie’s puking wasn’t motion sickness, it’s morning sickness. She got knocked up by George (the dead guy from the autopsy), they were engaged, and obvs that’s not going anywhere now. 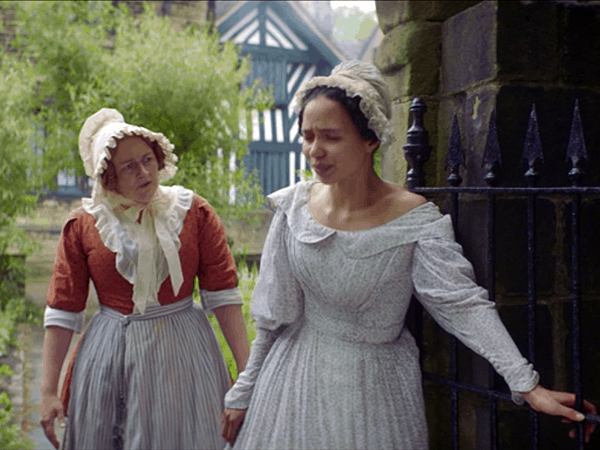 Cute dress, though I think she should be wearing a kerchief. Maybe she had one & lost it while puking?

Eugénie asks if she should admit her pregnancy to Anne Lister, telling the other maid, “You used to be her lady’s maid, you know how she is with other women. She understands human foibles and the pleasures of the bedroom.” The other maid says, hell no you’re still a servant, shaddup. IDK, how long can that go on?

Then there’s a thing about a sick horse. It’s not much of a plotline, but it’ll come back later, so I’m mentioning it now.

Marian and Anne Lister bicker, as I guess sisters are wont to do. Marian complains: “It’s all well and good being different in York or Paris, but in Halifax people talk.” 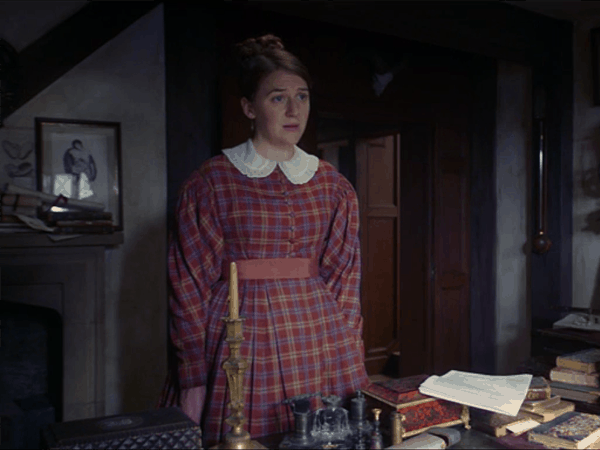 Anne gets a letter from Mrs. Lawton, who will be visiting, so she tells her maid to make, “the usual sleeping arrangements.” Nudge nudge, wink wink. The Anne goes looking through her books and has the first of what I expect will be many obligatory journal reading scenes. 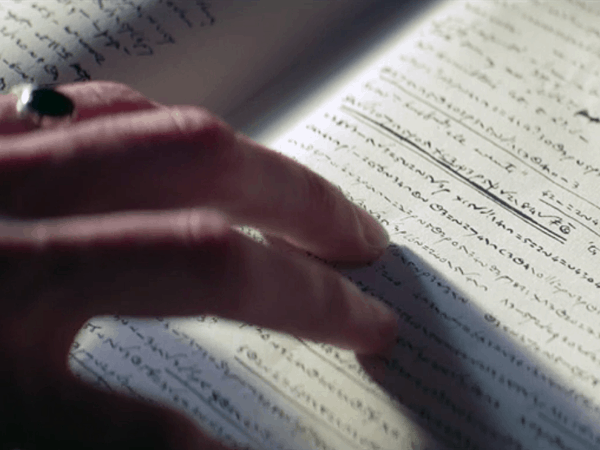 Yes, her actual diaries had this wild code with bits of Greek and other languages in it.

That leads to a flashback wiggly lines And we’re in Hastings, by the sea, with a shaky, handheld camera to make all the more flashbacky. Anne is in a Regency-ish pelisse coat. She walks in on Miss Vere Hobart and … dun dun dun … a boy! Vere introduces Capt. Donald Cameron to Anne, who is not impressed. Boy leaves, Vere says she’s going to marry him, Anne breaks down in tears, flashback out.

Something about this gown seems off to me. But the hair is excellent. 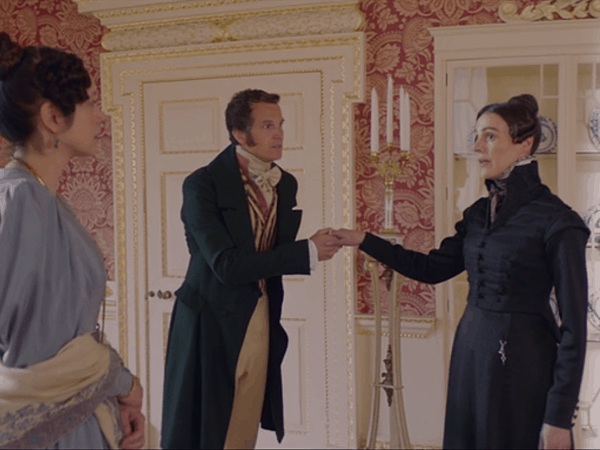 Aunt Lister interrupts Anne’s flashback and asks what happened with Miss Hobart? No answer. Then she randomly brings up Miss Walker, says she’s worth 3,000£ year at least, then suggests. “what she needs is someone to care about her, never mind the money.” Somebody’s trying to set you two uuuuuuuuppppp…. 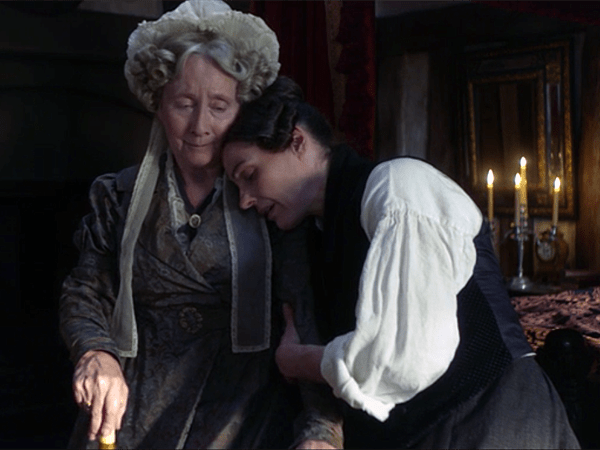 Next scene opens on a bird cage, then shows Ann Walker. She’s a bird in a cage. GET IT? How many times has that shot been done before? The doctor is checking her out for some “nervous” complaint (y’know them delicate ladies!), and he suggests a jaunt to the lakes, saying, “sometimes the best thing one can prescribe is a bit of adventure.” 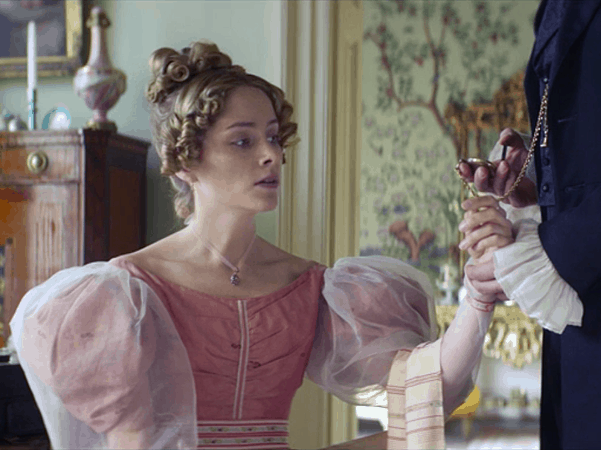 The most precious & sweet dress Miss Walker has in this episode. She’s definitely being painted as the girly-girl.

There’s a boring scene with the Hardcastles and their injured kid, then Anne Lister collects rents at a pub. She’s a hard-ass to her tenants as she goes over the terms of their leases. Back at Shibden Hall, she meets with Mr. Washington, as he’s been recommended as a possible replacement for Mr. Briggs. He currently looks after the Walker estate. Anne says she plans to leave Shibden and wants someone trustworthy as a manager since her father isn’t up to the task. They talk coal, maybe leasing, but Washington recommends mining for herself. 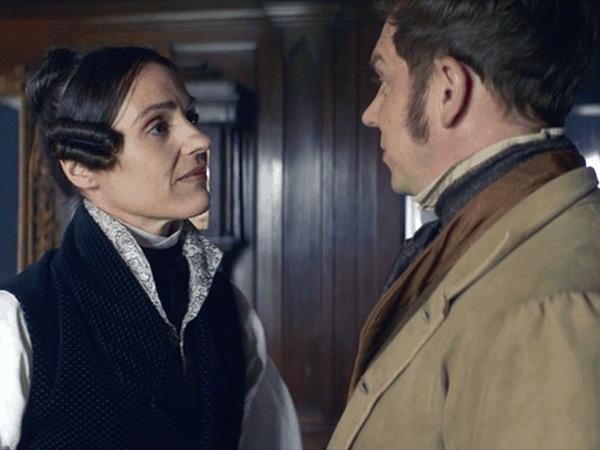 Eugénie does Anne’s hair, and Anne enquires about her maid’s illness. Eugénie doesn’t admit anything substantial. So Anne has a quick flashback to Miss Hobart. 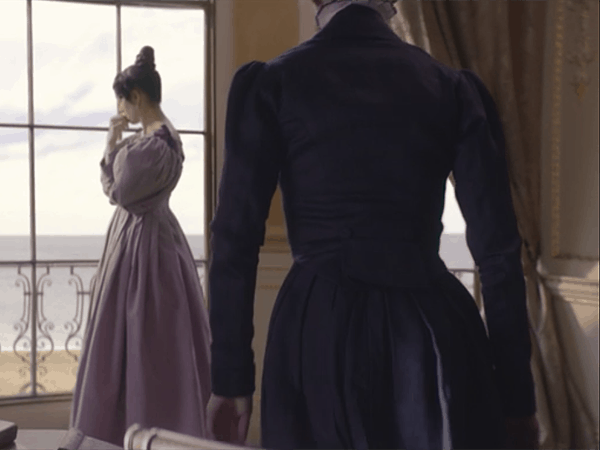 Before that can go anywhere, Mrs. Lawton — Marianna — arrives and Anne rushes to greet her. Marianna calls Anne Lister “Freddie.” 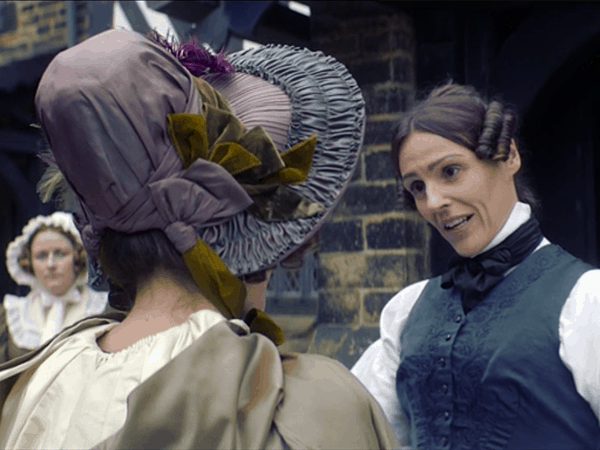 Here’s a fine bonnet, for thems who like such things.

The family has dinner with Mrs. Lawton, where Anne talks about the estate and her sister is kind of bitchy about everything. 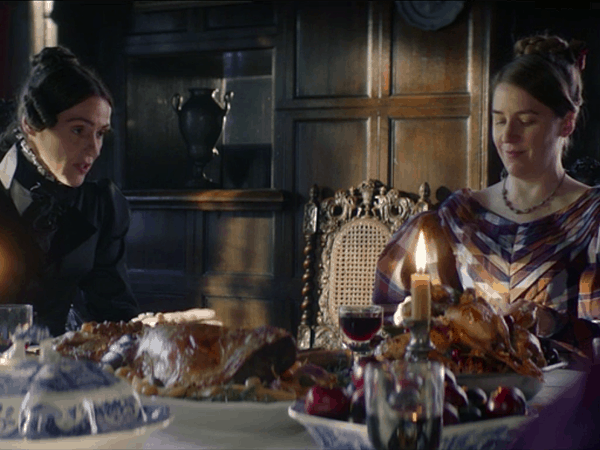 Marian’s wearing the same plaid dress as in the very first scene, now without a kerchief so it looks less daywear & more dinner appropriate. It’s quite lovely so why does she have to be such a pill? 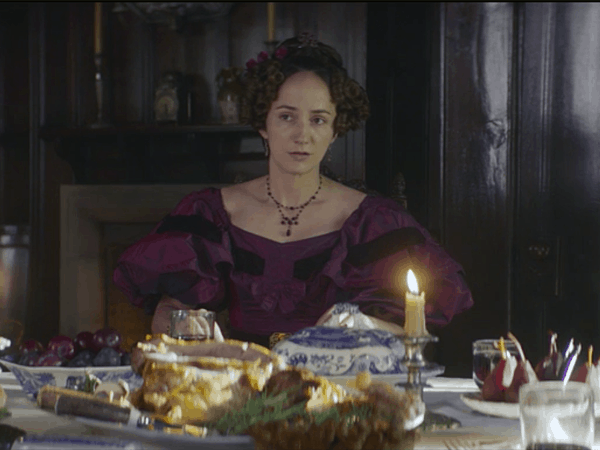 Ma’am, please step away from the table. We’ll need to be seeing that gown in full length. Sorry, it’s just too damn pretty to hide behind a food & crockery!

And cut to a sex scene between Anne Lister and Marianna!

Right after banging, Marianna tells Anne: “You should marry a man. You could have a title. You could have money. You could have everything you want. You wouldn’t have to sleep with him if you found the right one. He might be as grateful for the fig leaf coverup as you.” Anne: “Have we met? I could never marry a man, not for any reason, not under any circumstance, it would be perverse.”

Marianna continues to say how it’s practical because Anne is just going to keep getting upset by women who keep getting married (like Marianna did). Marianna is a real bummer of a lay. But the scene does spell out the essential problem of Anne Lister’s life: either hide in the 19th-century version of the closet by marrying a man as her cover (and what all her female lovers have done) or live her truth and live openly with a woman who she loves. 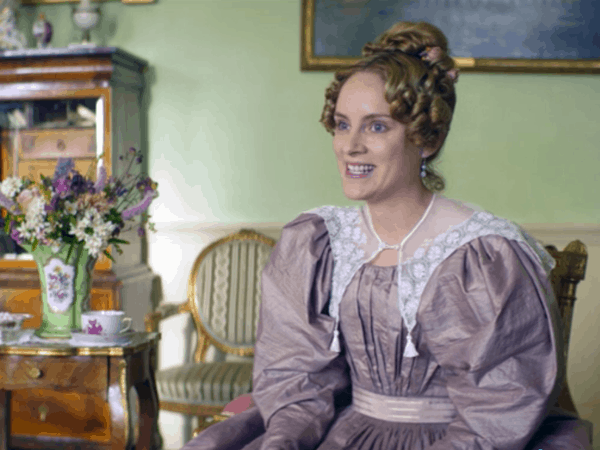 Also visiting is Mr. and Mrs. Priestly, some kind of relation of the Walkers, who have known the Listers previously. Mrs. Priestly says of Anne Lister: “She’s true to her own nature … and nature was an odd freak on the day when it made her.” But she’s not being mean about it, just kind of chatty and silly, because she also says, Anne Lister is “a very good friend to have.” 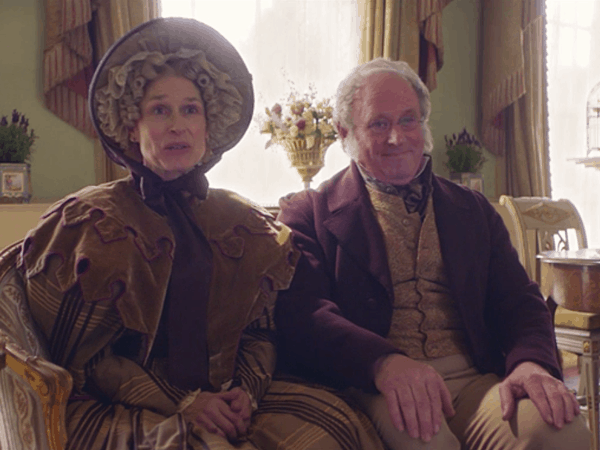 Now the doctor is visiting Aunt Lister, Anne is in the room, and the doctor starts talking of how Miss Walker is so sad all  surrounded by old people. This is the personification of “people will talk in small towns,” amirite? 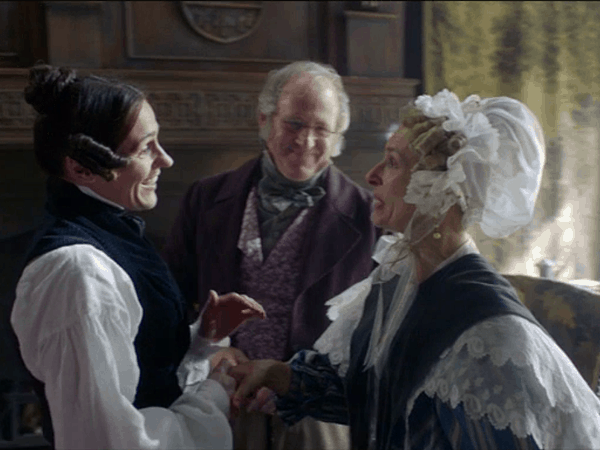 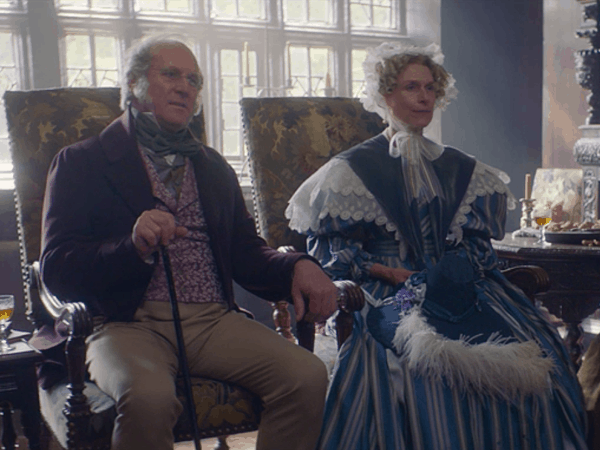 Marian Lister is talking about some political issue of the day to their guests, then Anne Lister jumps in and rants against ‘universal male suffrage,’ how working-class male tenants can vote but not her. She’s totally a class snob (this is historically true, btw).

Aunt Lister and the doctor comes in, Anne Lister remarks about the doctor, “Odd little man, mincing walk.” WTF is that about? Making people think he’s queer and throwing off suspicions about her? Weird! 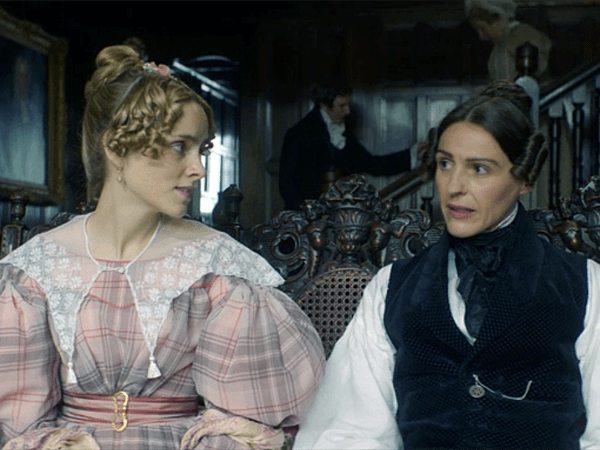 The meeting concludes with Anne Lister, in voiceover, wondering if she will endeavor to make Miss Walker her wife. Then she shoots that sick horse (don’t worry, details aren’t shown), and goes off to visit Ann Walker. 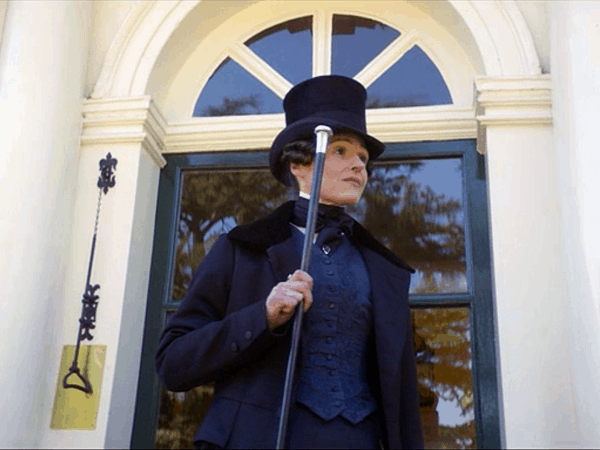 We hear the folk song “Gentleman Jack” by O’Hooley & Tidow over the end credits, which is damn cool.

Looks like Lister will make an advance on Miss Walker in episode 2, airing next Monday! I’ll recap next Wednesday!