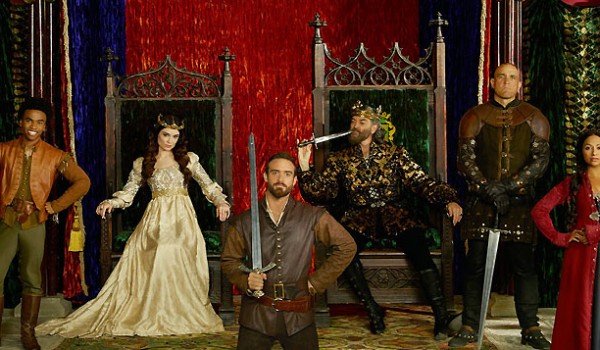 They were surprisingly well done, if all over the pre-1600 map. Kind of like going to a Society for Creative Anachronism event where everyone was working with a decent budget.

To recap: Galavant was a four-night / eight-part musical-comedy miniseries on ABC with a “fairy tale” setting and story. The first season just ended, and it’s available for streaming on Amazon and iTunes. Considering the gigantic cliff-hanger on Sunday, yeah, a second season must be in the works.

There was one moment in the second episode (during a string of “Yo Mama” jokes) where the main character, Galavant, says the year is 1256. But no other reference was made to a historical time or place. It’s just ye olde timey with modern, slightly risque jokes thrown in.

Storywise, it’s silly but definitely doesn’t take itself seriously, and the songs were pretty good in a Disney-meets-Monty-Python way. Naturally enough, the music was written by Alan Menken and Glenn Slater, who come from Disney. Menken cowrote The Little Mermaid, Beauty and the Beast, and Aladdin, among other things, and Slater collaborated with him on The Little Mermaid‘s stage adaption. There were a couple of wonderfully snarky songs that gave Galavant an edge.

The costume designers also have serious chops — Susannah Buxton was the main designer, with Charlotte Mitchell as assistant costume designer, and they’re credited with about half the episodes each. Buxton has created costumes for lots of British historical series including Downton Abbey (10 episodes), Tipping the Velvet, and the 1997 Jane Eyre starring Samantha Morton. Likewise, Mitchell has been costume supervisor on British TV series such Lark Rise to Candleford, Doctor Who, and Poirot. They definitely have an eye for detail and brought this to Galavant.

The hero costumes are pure fantasy but well-realized, but some of the subordinate characters are dressed in pretty darn good historical costumes, if all over the medieval/renaissance map. The  background is filled out with decent historical-y garb, sometimes generic, often rather nice. I did not detect stretch panne velvet or visible zippers, although there was a preponderance of metal grommets.

Most of the costumes are fully detailed, whether in trims or accessories. I was impressed to see many characters (ok, the men) wearing a period-correct amount of layers to their outfits. Shirts, doublets, jerkins, instead of just one shirt or worse just a sleeveless jerkin (I’m looking at you, The Tudors). All the guys wear essentially modern pants and boots, but from the waist up, it’s got a lot of historical flair.

All this results in a depth that gives this weird little world some believability. It’s looks like somebody cared and took the time to flesh things out. Sometimes, that’s all I want, y’know? Besides, I’m a sucker for a musical. So let’s take a little tour of the costumes of Galavant.

Galavant — Our hero gets the most boring costume. He’s just a dude! A medieval bro! He isn’t given much of interest to wear. ‘Cept during the episode where he grudgingly pretends to be his squire’s squire, and he is forced to wear an unfortunate biggins along with all the other squires. BECAUSE THEY KNOW this makes them look derpy. THANK YOU. Unfortunate biggins AND jazz hands, it doesn’t get better than this.

Princess Isabella Maria Lucia Elizabetta of Valencia — We’re going to see a lot of her cosplayed at conventions this summer, mark my words. Especially her red “training” outfit, worn before the joust, as she gets Galavant back into shape (it’s a very Rocky montage). Total fantasy outfit with a 18th-century-ish corset and a long, lace skirt plus tall boots. They’re gonna love this at ComiCon. However, during the rest of the series, she wears a kind of blah peasant renfaire dress thing and a long coat. Upholstery prints are a really big deal in Galavant world. What fanboy dreams are made of. For whooping your ass & not giving a crap about your name.

King Richard —  Totally trying for 15th-century Burgundian here! Most of his outfits are simplified versions of a period doublet with some of the deep pleating found in the historical version. The King’s clothes are made in sumptuous, period-esque fabrics too. Like most of the men, Richard is wearing long trousers because this is definitely a “no tights” production [btw, I think this is the current hangup in semi-historical and full-on fantasy costume productions: No tights on the dudes. Reign stated that as one of its costume mandates, for example. So what, does Hollywood think this reads “too gay” for the intended audience? It’s been widely reported that the BBC’s “Wolf Hall,” now playing in the U.K. and coming to PBS in America in April, reduced the size of the Tudor-era codpieces for American audiences. Someone Has Issues. But I digress.]. However, check out the king’s embroidered shirt — is that blackwork? Love the detail. Pleating on his doublet with laced-front closure. Weird armor, but good view of the embroidered shirt. I think my embroidery machine has that pattern. Madalena & King Richard before the wedding.

Madalena — She’s supposed to be the hottie, the love interest with a twist, and the actress is obviously pretty. But they hide her in flowing Empire-waist gowns that aren’t exactly historical — it’s got a nod towards a late 15th-century silhouette, but is mostly wild fantasy. It’s an not exactly unflattering, but seems like a weird choice. Maybe they were trying a direct riff on Princess Buttercup from The Princess Bride? Madalena’s wedding gown is very Buttercup-y, and a lot of her other gowns share that cut. Front pleating seems to be the go-to for her gowns. And then no waist. Huh?

Sid — As Galavant’s squire, he has a small role except for a ton of singing and one episode giving his backstory. He does get a decent renaissance-faire  costume, showing how this series can’t decide on 16th-century costumes or more medieval. And he gets the closest thing to tights we see in the show — he seems to be wearing dark green, thick-knit leggings with his doublet. No codpiece or codflap. He is apparently fond of fancy metal aglets tying or faux-tying bits together. Chef — Best hat in the series! This, my friends, is what makes an unfortunate biggins fortunate — he’s wearing a proper cap underneath his hat. Always. No head-underwear showing. Of course, the character himself is kind of derpy, but his headgear isn’t. His outfit is right out of the Tudor kitchens at Hampton Court Palace. Bonus points for a funny little song with Daisy from Downton Abbey. Chef is just happy to be here. What is up with Chef’s pants? It’s like they tried to make 16th-c. paned slops, but gave up halfway thru.

Queen and King of Valencia — The queen is wearing an excellent costume. She has what looks to be a 16th-century surcote or loose gown, very appropriate to a wealthy older woman. As these types of gown were wore in England, Spain, Italy, and Germany, it works well for the show’s vague European fairy-tale location. Sadly, the outfit is topped with a totally fake French hood (though her hair is tucked up in a snood, because she’s old, I guess). Still, from the neck down, faboo.

The king, however, is wearing totally mismatched robes of indeterminate period or style. It may be the worst costume for a speaking character. Oh well. King of Valencia: How they used up all their fabric scraps at the end of the show. Look at her ruffed smock! Look at the teeny trim on the standing collar! And even tho’ the hood is wrong, it’s not a total stand-up visor, & the trim placement is an attempt at being 16th-century.

Gareth — The king’s henchman wears butch armor that’s a big ol’ fantasy-medieval-steampunk mash-up. Not much to say about it ‘cept any time other characters need to wear armor, it has this same look about it. I guess they did a production run. *shrug* The Jester — He’s a jester, what can you expect? Upholstery fabric and metal grommets make up his cliche jester uniform. Tiny little bonus point for the edge treatment on his smock — I’m guessing since the costume designers had worked on so many British historical series, they had a soft spot for renaissance linens and made reference to them wherever possible. Guest Stars — John Stamos, Weird Al Yankovic, Ricky Gervais, and others have amusing cameos, but their costumes are not spectacular. Hugh “Earl of Grantham” Bonneville plays a pirate, but his song is far more interesting than his outfit. None of these are bad, but it feels like letting the Big Name Guest Stars shine, don’t distract people by giving them wild costumes also. Take note of this fabric, it’ll show up later on King Richard (always smart to buy the whole bolt!).

The peasant folks in the various villages are a hodgepodge, but it works. Almost everyone is wearing a hat. The outfits are neither shoveling-shit dirty and raggedy nor sparkling Disney clean and pristine, so the background looks believable. How many bigginses can you find in this picture?

In the castle scenes, the background people are more tidy, of course. They too have headgear, and many women (at least the older ones) even wear their hair up! As with the whole series, the costumes range all over the general medieval / renaissance period, vaguely 12th to 16th century. Nice fabrics on a lot of these court extras. Also headgear, period-esque layers of clothing, nothing glaringly modern.

So while not historical and not explicitly trying to be set in a particular period, Galavant‘s costumes don’t suck! Basically, they created a fantasy world based on European medieval / renaissance fairy tales and executed this vision very well. Compared to, say A Knight’s Tale, Galavant looks really good because of the attention to detail, the internal consistency, and the general lack of blatant visual anachronisms.

If you’re going to take a stab at fantasy/historical costumes on network TV, you could do a whole lot worse than Galavant. This is a really solid effort, and if you’re a musical-theater nerd like me, it’s easy on both the ears and the eyes.

Did you watch Galavant? What did you think of the costumes?