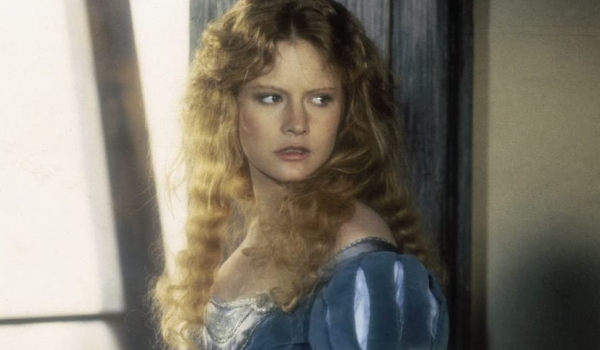 I saw this movie at some point in my adolescence, and consequently only had these bizarre snippets of memories of it. So, re-watching Flesh + Blood (1985) as an adult, I can really only say that the bizarre snippets of memories only make slightly less sense than the actual film, and surprisingly, the costumes are the least awful thing about it. The plot was apparently hacked together by committee, winding up a weird love triangle between Jennifer Jason Leigh, Rutger Hauer, and Tom Burlinson (who you might remember for not being as famous as either of those two), when originally director Paul Verhoeven intended it to be some artistic statement about the vagaries of the loyalty and friendship between Hauer’s character and another guy who ends up being in the film for all of 10 total minutes. 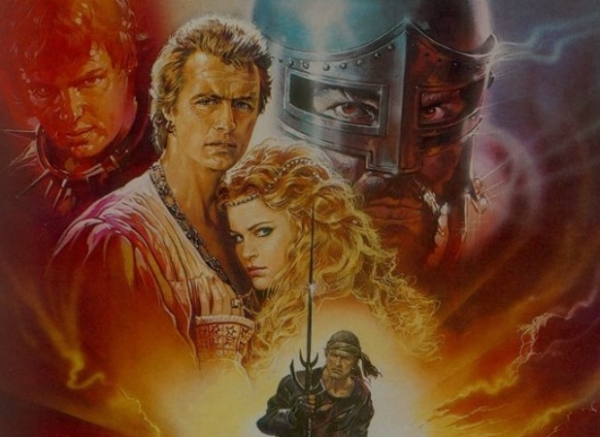 There’s just so much happening with the DVD cover art, I had to include it here.

Also, hoo boy does this film have a lot of rape in it. And a lot of other types of violence and disgusting human behavior, not to mention animal cruelty, and, well, a lot of mud and blood and vomit. It’s like the pinnacle of the “middle ages were an abject shitshow of humanity” cinematic trope. All I’m saying is that if you haven’t seen this film before, and you’re the least bit squeamish, you might give it a pass. Apparently some versions have the rape scenes edited out, but then that makes me wonder how long the resulting film is … 45 minutes? Because, seriously, we’re talking a lot of rape. 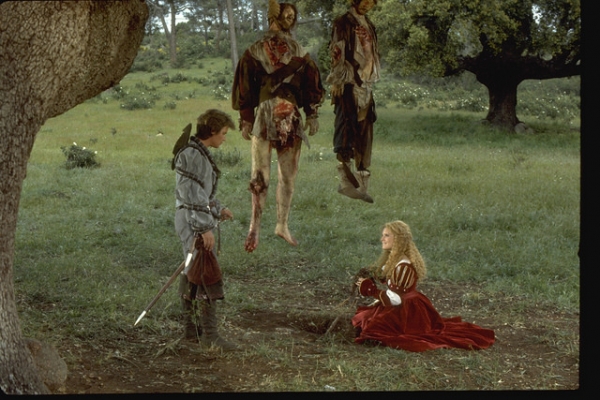 And a romantic scene beneath a pair of decaying hanged corpses. The wtf-ery is endless in this film.

So, on to the costumes. They were designed by Yvonne Blake, who is notable for having designed the costumes for The Three and Four Musketeer films, Goya’s Ghosts (2006), and Carmen (2003), so while these costumes aren’t perfect, they’re still pretty solid. The film is set in 1501, but in a nondescript European country (maybe Italy? the protagonist is the heir to the Arnolfini family), but the women’s costumes all look very Germanic and from a decade or two later. The men’s costumes could go either way between early 16th-century German and early 16th-century Italy. Aside from lacking clarity on where the action is taking place, at least Blake apparently looked at more than one historical source before designing the costumes, so there’s some internal consistency. 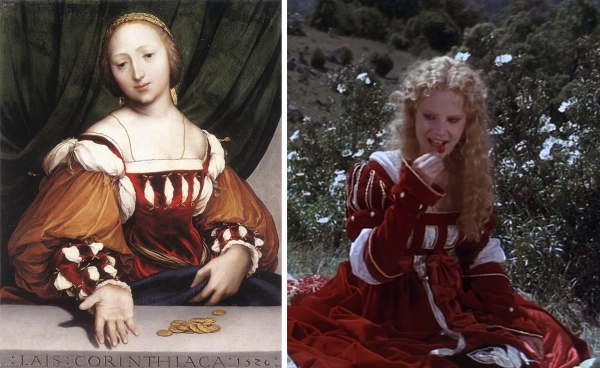 JJL’s red dress appears to be based on one of the many versions Holbein painted of this red dress, but with different sleeves. 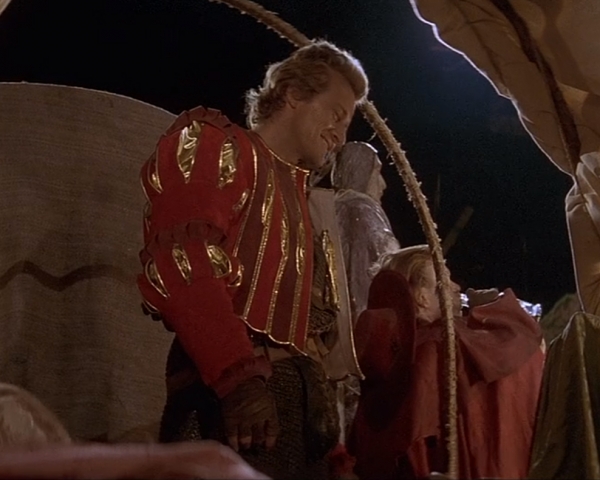 The addition of the gold lame in the slashes isn’t great, but it is suitably flashy, so…

The hair is wacky, the clothes are half-assedly worn, but none of the costumes are egregiously out of period. 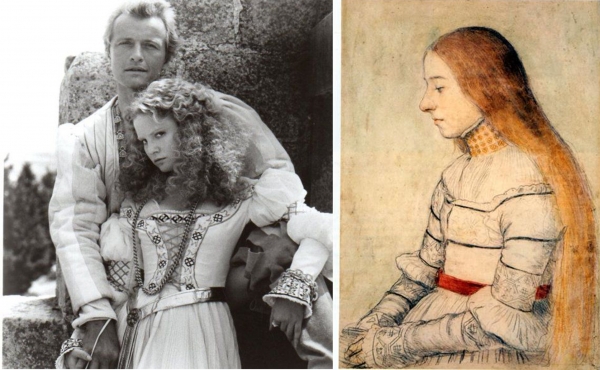 The most memorable dress in the film worn by Jennifer Jason Leigh looks like it took a fair few elements from Holbein’s portrait of Anna Meyer, c. 1526. 1980s perm not included. 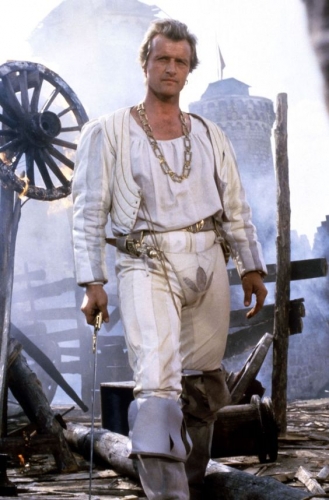 Rutger Hauer would look good in anything (or nothing), but his white outfit is still pretty decent. Props to Yvonne Blake for not shying away from the detail on his codpiece or even including a codpiece in the first place. And before anyone gets on me about the lack of giant codpieces, no, those were a later 16th-century phenomenon. Things were still slightly restrained in the crotch department in the early 1500s. 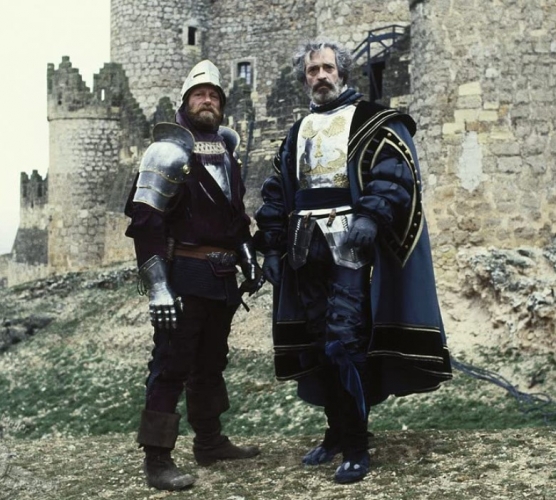 None of this is bad. Even the armor is, as my boyfriend put it, “Eh, okay.” Also, points to the costume department for putting Arnolfini in shoes, not boots. 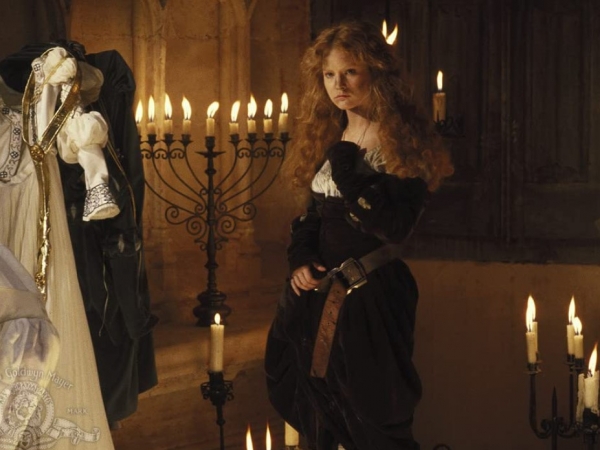 I liked JJL’s black dress, especially how she has it tucked up between her legs like a pair of breeches so she can run around and climb and stuff. 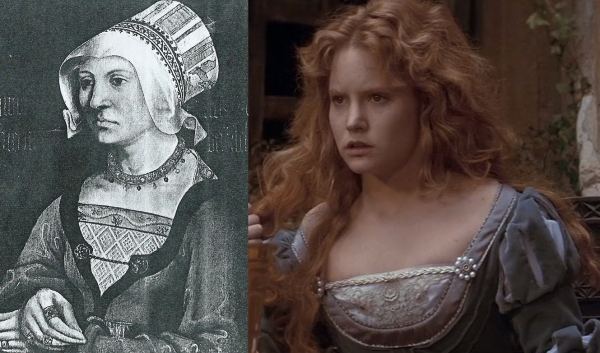 There even looks to be some vaguely Swabian-inspired elements in a handful of the women’s costumes. It’s passable at a distance.

All in all, I think I can easily go another 30 years without watching Flesh+Blood, but at least the costumes made it somewhat worth my time.

What did you think of the costumes in Flesh+Blood (1985)? Share your thoughts with us in the comments!