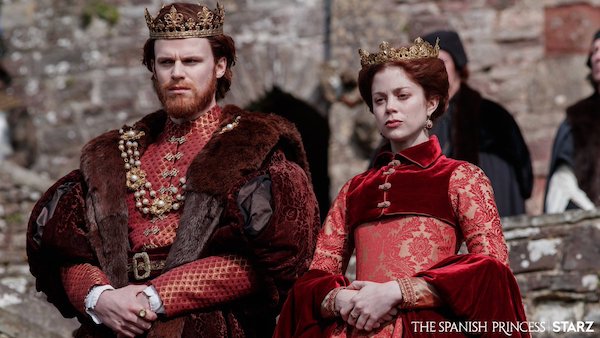 Well, people, we have finally reached the end of The Spanish Princess (2019-2020)! That’s right, Starz has announced that this will be the final season (their next project will be an adaptation of some of Alison Weir’s fiction and non-fiction books about Eleanor of Aquitaine, which should be … interesting?). And I’m glad, because I can’t see these actors playing older Catherine of Aragon and Henry VIII.

There were just two episodes left to watch, and in them we go through what this show is portraying as “the end” of Catherine and Henry’s relationship (no divorce proceedings; Anne Boleyn barely pops up as The Next Floozy before things end). I’ve been much happier with season 2 (plot- and costume-wise), except for the fundamental issue of having Catherine having lied to Henry about sleeping with her first husband/his brother, Arthur. As I’ve previously explained, that just in no way understands the essence Catherine’s character and so makes the foundation of the show super shaky and implausible.

Margaret Tudor continued to be overacted by poor Georgie Henley. I am sort-of happy that they got the whole “firing cannons at her deadbeat husband” thing, although the context was different, and I seriously doubt Margaret did the firing herself. 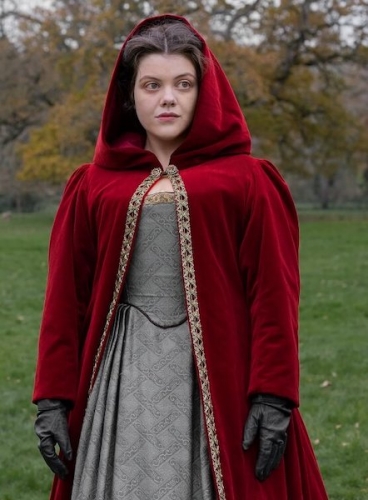 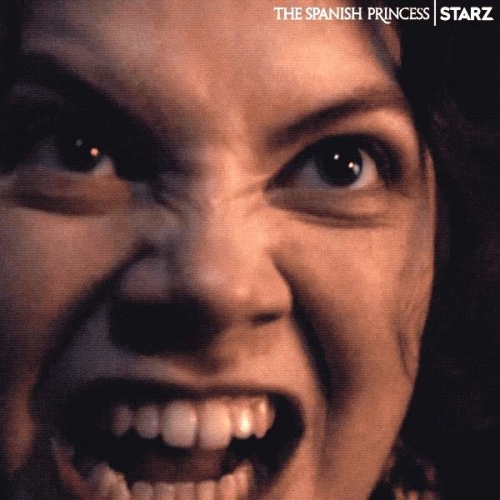 I’ll be fine not seeing these bared teeth again any time soon.

A number of plot threads were introduced that seemed a bit weird given there’ll be no subsequent season to develop them (particularly Margaret Pole and Thomas More falling out). Lina’s plans to leave England felt more appropriate to a denouement, although let us note Rosa showed up wearing Catherine’s season 1 sari bodice dress: 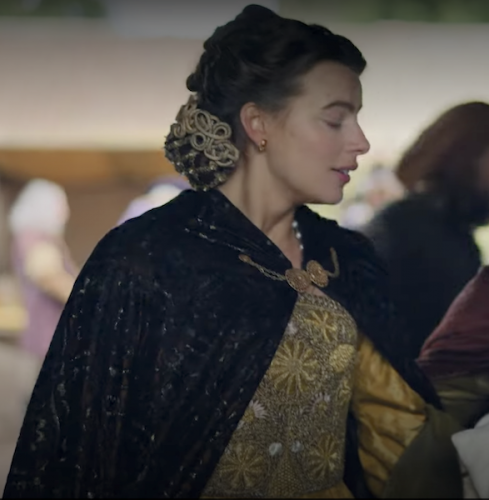 Hey, royals did pass on clothes to their attendants, so it’s plausible?

I gave them some major side-eye for Anne Boleyn. I actually liked how they approached it — Anne was just a rando at court until Henry took a fancy to her. But they skipped over Mary Boleyn and reversed the casting of the two sisters: 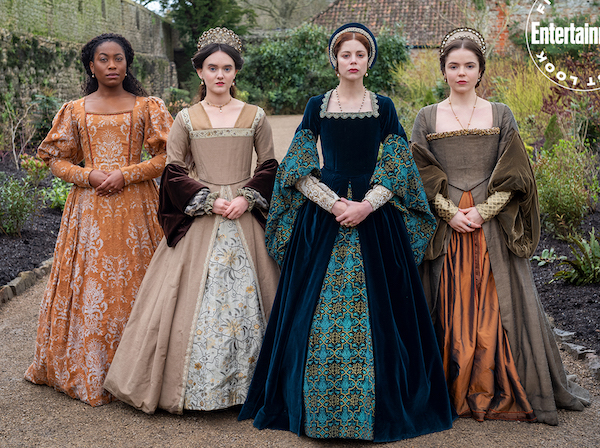 That’s allegedly Mary between Lina and Catherine, and then Anne on the far right. Which seems opposite, hair color-wise, if nothing else. Also, not a huge fan of Anne’s dress. 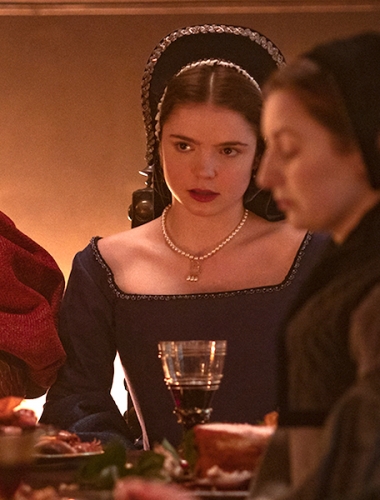 This actress just doesn’t read “Anne Boleyn” to me. At all.

Costume-wise, these episodes finally found early 16th-century Tudor dress! I actually applaud costume designer Pam Downe for getting us there and realize she had to connect her designs to those of season 1, although I wish she would have gotten there sooner. More specific thoughts: 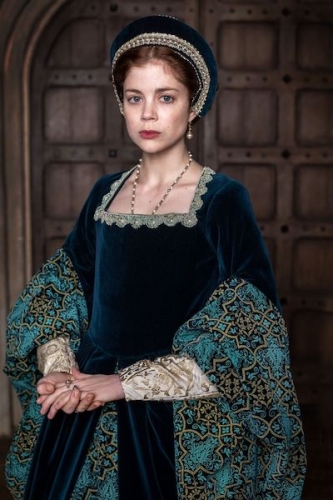 I actually really liked this fabric on Catherine’s sleeves/forepart. Okay, the blue is probably too bright, but I like the Moorish pattern. It worked well on screen. 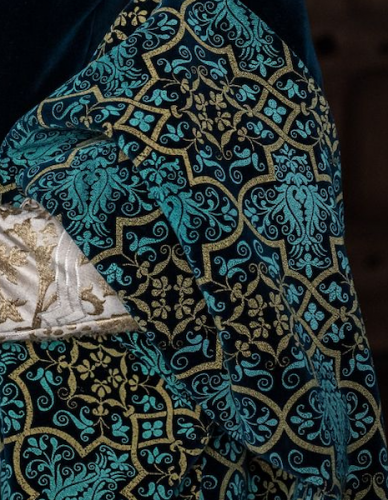 I think this may be one of the 3D printed fabrics Downe described previously. 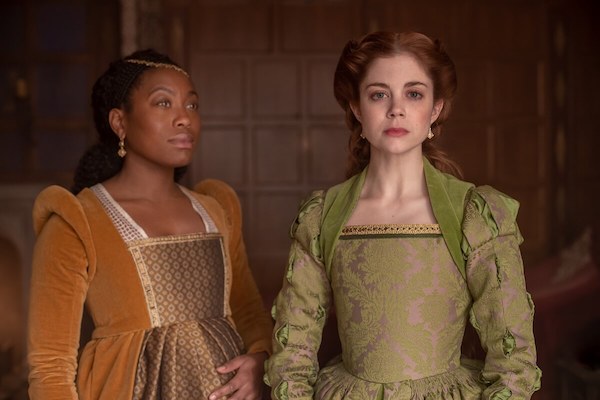 There were some kicky shrugs instead of partlets… 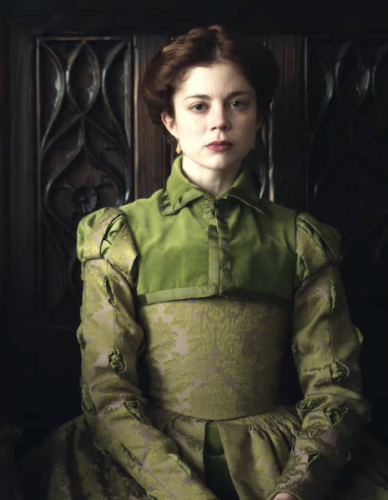 But then real, honest-to-goodness partlets! 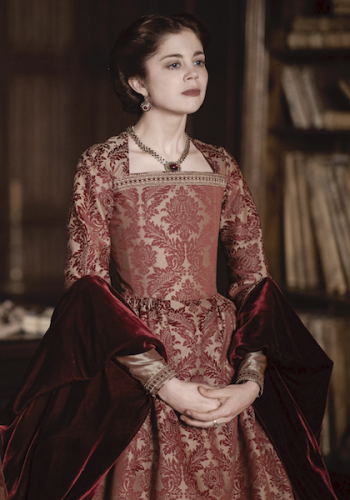 This dress was very beautiful, and it has the hanging, turn-back sleeves that are The #1 Typical Element of Tudor Dress! (at least to me) 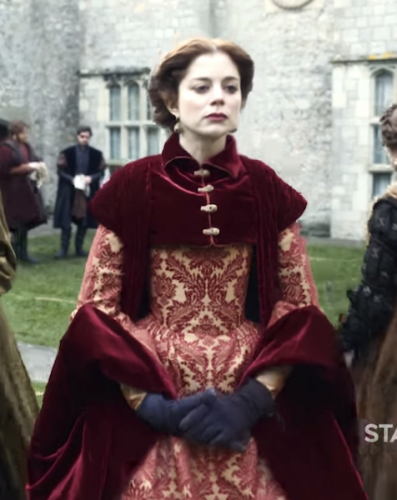 I was however confused by this capelet/cape thing. It looks like the long hanging parts are OVER the shorter capelet? 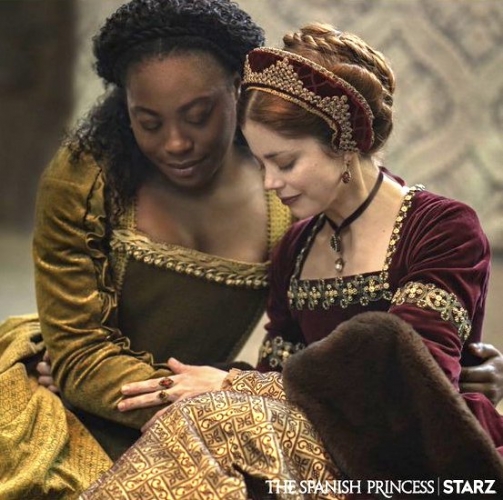 I admit I liked the trim layout on this not-a-French-hood — the points are offset, instead of aligned with the center of her face. It made it look like sun rays.

This dress is total fantasy, but it’s pretty! 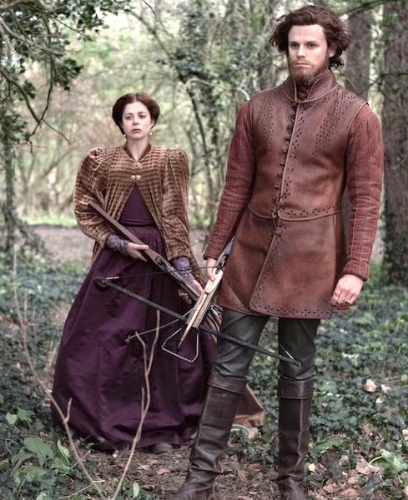 But then Catherine and Henry have a Big Fight while hunting, and Catherine has put on this silk/rayon-y velvet overrobe that’s 16th century meets 1890s. 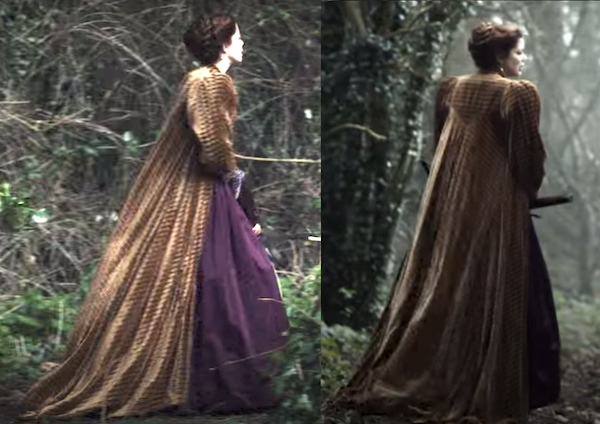 I get that it was supposed to be impractical, and the long train was a metaphor, but it just doesn’t seem like something you’d go riding in. 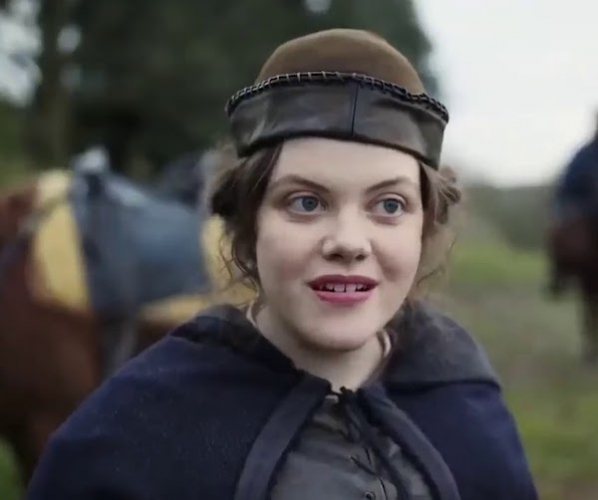 This hat isn’t an Unfortunate Biggins, but it is just plain unfortunate. 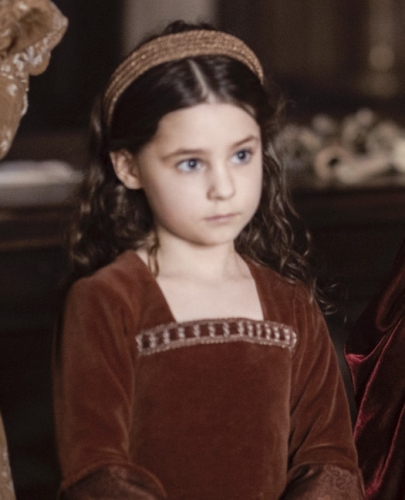 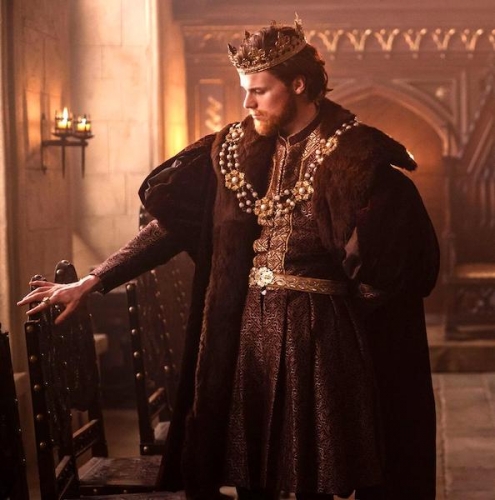 They tried to make Henry bulkier and hairier. It just BARELY worked.

And then, HOLY SHIT Y’ALL, THIS HAPPENED: 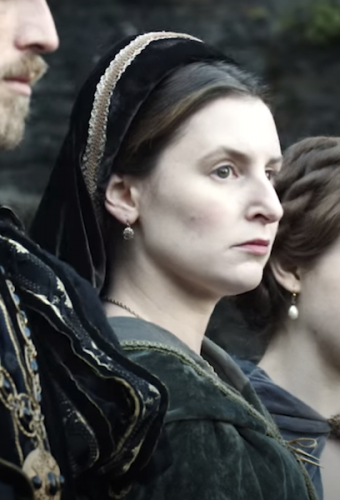 Maggie Pole gets a Not Bad French Hood! Look! No Sticky Uppy!

WAIT! What is this? I do believe it’s a Really Quite Good French Hood! Holy crap! 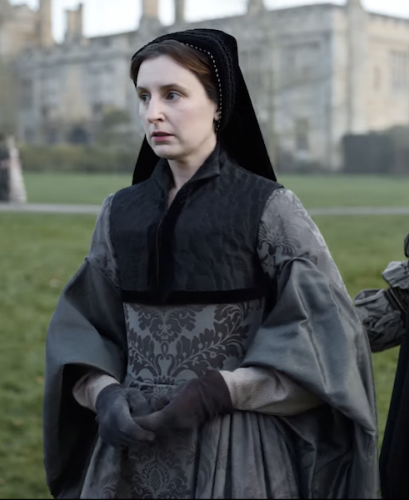 And then “Maggie” is in a squared-corner hood of the kind fashionable during Queen Mary I’s reign (1553-58). 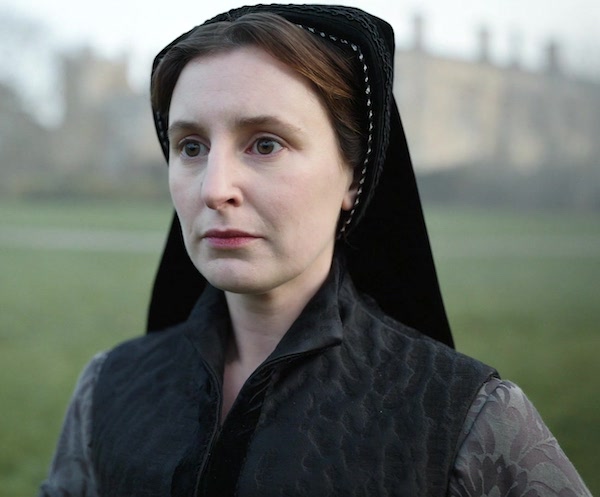 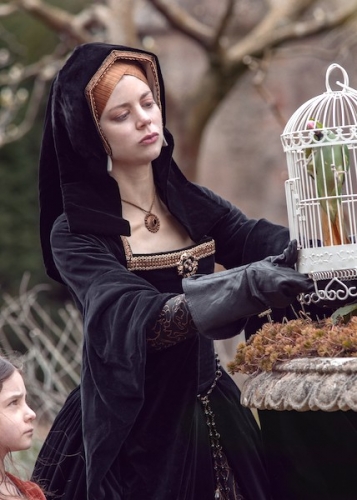 And then Catherine busts out the Actual Tudor Dress with AN ACTUAL GABLE HOOD!!! (And a stupid metaphor involving releasing a bird from its cage, which has been done to death, but whatever.) 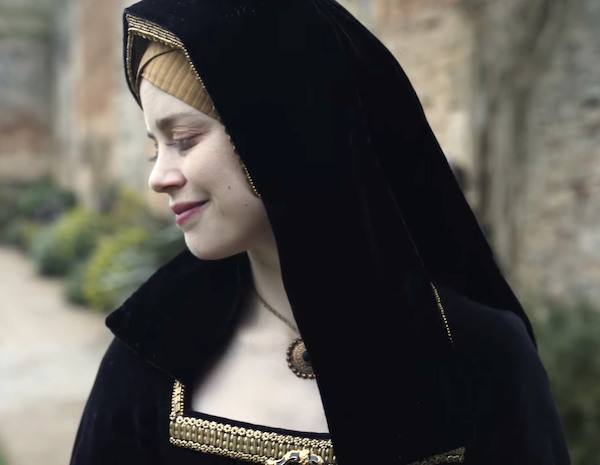 My only quibble is that the forehead bands come down too low on the face. 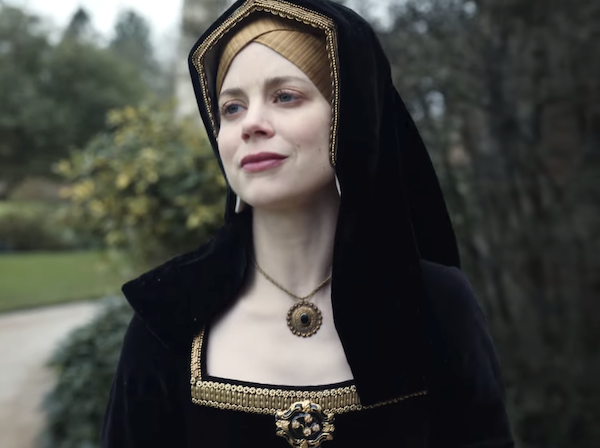 Look! It’s what we should have been seeing for the entire season!

What did you think of The Spanish Princess season 2?