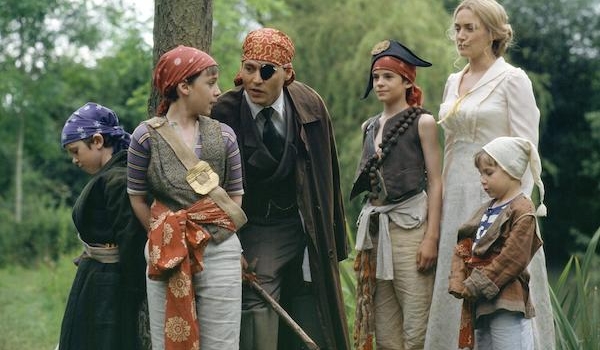 Inspired by the true story of how J.M. Barrie (Johnny Depp) wrote Peter Pan, with Kate Winslet as the mother of four boys who inspired the playwright.  I liked but didn’t love it — it was touching and fun, although the Hallmark quotient was a bit high.

But on to the important stuff!  Kate Winslet looked divine, although I was hoping for more screen time for her gorgeous blue evening dress, plus there was another pink evening dress of which you really only got a glimpse.  Lots of smart blouse and skirt combinations for day.  However, the film is supposed to be set in 1903, but looked (costume-wise) like 1910-12ish.  Where were the pigeon-front bodices/blouses?  What was with the V-necks (very flattering, but anachronistic imho) on Winslet’s blouses?  Julie Christie as Winslet’s mother gets ONE dress (which looked straight out of 1909-10) for the whole film (and she’s supposed to be a well-to-do society woman), and Radha Mitchell as Mrs. Barrie got the short end of the stick — most everything she wore was just plain ugly and made her look bony.