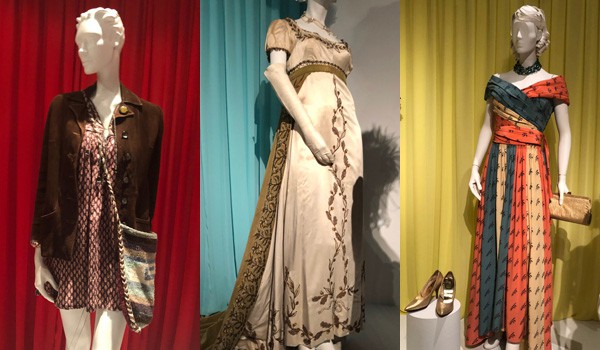 Frock Flicks note: This is a guest post by our friend Loren Dearborn, who blogs at The Costumer’s Closet. She was kind enough to share her photos and notes from the annual FIDM TV costume exhibit.

The Vanity Fair display only had Rawdon and Becky’s costumes, but given they are the flashiest characters in the show I was OK with that! The blue spencer and gown that Becky wears marks the beginning of her transition to bolder colors as she moves from being the poor student in the beginning of the series to the glamorous social climber of the middle.  While this outfit read well on-screen, in person it was a bit disappointing.  The fit and cut of the spencer seemed off.  And I thought it was a bit odd to have the gown and the spencer in similar in colors but not have the fabric match, as most the the spencers I’ve seen are either of matching gown fabric or of a contrasting color. I’m not sure how many years are supposed to have passed in between the Waterloo episodes and Becky’s presentation at court, but the designers made the wise decision to pass over the unflattering English court gowns with both empire waists AND big hoops and move on to the more flattering style of English court gown from the 1820s.  This gown looked wonderful on screen but was not as successful in real life.  While I liked the embroidery designs on the front of the dress, the heavy trim on the train seemed a bit too heavy and reminded me a bit more of the 1970s than of the Regency period. Becky’s red gown may have been the least historically accurate in its use of what looked to be chiffon, but I thought it was actually the best of her three costumes on display.  The sleeve detail was wonderful, the drape and fit of the gown was perfect, and the bright red color helped contrast Becky’s daring and flirtatious nature with Amelia’s more sedate and virginal one. Thackeray refers to Captain Crawley as a member of the Life Guard, one of the cavalry regiments in the British Army, and Rawdon’s handsome uniform reflects that. The huge plumed helmet, single-breasted red coat and grey trousers with a red stripe down the side are just what the Life Guards were wearing when they went to fight in Waterloo. I haven’t seen any indication that they wore capes into battle, but I wouldn’t be surprised to discover a cape like this was part of an officer’s dress uniform and can forgive them for wanting to display such a lovely cape with his campaign uniform. When Sir Pitt dies, Rawdon goes into mourning and dons this chic black outfit.  I loved the tone-on-tone design of his black waistcoat and the military detail on his coat.  It’s unclear how much time has passed since Waterloo, but the cut and style of his ensemble are fairly similar to these fashion plates from Costume Parisien 1815-1820. You can read more about the costumes of Vanity Fair in The Telegraph.

This was the hardest one for me to research as there is not much information about 18th-century Cherokee and Mohawk dress on the net.  While I couldn’t find an ebook version, I thought Cherokee Clothing in the 1700s sounded like a great resource for those wanting to learn more. What little information I did find seemed to support Dresbach’s choices for the Native Americans. Front-seam moccasins, trade silver earrings, loincloths, leggings, and accessories with bead or quill decoration were all part of Cherokee menswear of the time. This look on the left is a composite of several characters.

I like how Dresbach added a European-style coat to the Chief Nawohali’s ensemble — trade shirts with European coats and pants became more popular among the Cherokee men towards the end of the 18th century. Adawehi also has front-seam moccasins as well as a wrap skirt, beading on her bag, and a blanket from her ancestor over her shoulder all of which are in keeping with written accounts of Cherokee women of the period. The two looks that jarred my eye were the ones Brianna wore.  I should mention, I don’t watch the show, so I didn’t know until I started researching it, that her looks were from scenes set in the 1970s.  As 1970s outfits a teen would wear, I thought they were good, if a little more fashion-forward than what was typical. Brianna’s patchwork outfit just screamed 1970s hippie to me.  While I’m not sure how much of a hippie her character is, Terry Dresbach has said that she was inspired by YSL patchwork fashion, and certainly the patchwork look was very big in the late ’60s to early ’70s. I liked that Brianna’s brown suede jacket had a few design elements that harkened back to the 1770s, not only do details like this fit the story arc of the show, but because of the centennial little throwbacks to 1776 really did appear in some of styles around 1976. You can read more about these costumes and others from this season of Outlander in Harper’s Bazaar.

Once again, Donna Zakowska just nailed it.  The costumes for The Marvelous Mrs. Maisel convey changes in the characters and look true to the period, but also look like real clothes.  And they are an awful lot of fun besides.  The pieces picked for the FIDM exhibit are all from the episodes in the Catskills, and as a result they are colorful, whimsical sportswear appropriate for a resort in 1959. [Editor’s note: Donna Zakowska, Marina Reti, and Tim McKelvey won the Emmy for Outstanding Period Costumes in 2019 for the Mrs. Maisel episode “We’re Going To The Catskills!”] Midge’s sheer yellow dress is less fashion-forward than the rest of her Catskills wardrobe, but I think it’s a great choice.  Midge and her parents want everything to go as it always has in their visit to the resort, and this dress harkens a bit more to the past and is cheerful and fun despite her being (gasp) a divorcée! Designer Zakowska has mentioned that she took inspiration from designer Claire McCardell, and it shows. There is an ease about most of the outfits Rose and Midge wear in the Catskills that clearly takes it’s cue from McCardell’s chic sportswear of the 1950s.  The long, off-the-shoulder dress that Rose wears almost looks like a copy of this McCardell dress from 1952. Midge’s adorable dress and shorts combination that she wears while boating is also a look that McCardell favored, you can see something similar in this McCardell design for McCalls from 1958.  The color and silhouette are also similar to this earlier McCardell sundress of 1947.  And I thought the painted butterflies on her straw hat were charming! Midge’s ping-pong halter-top romper is a similar style.  There are wonderful little details like the scalloped edge on the top which are echoed in the scalloped opening to the pockets on the romper. These edge details reminded me of this Claire McCardell cropped top and skirt from 1946. While Susie’s outfit might not be found in Vogue, it’s a very believable costume for someone performing “They’ve got a lot of Coffee in Brazil” in a stage show at a resort in the late 1950s! You can read more about this season of Mrs. Maisel’s costumes in Hollywood Life.

And if you happen to be in the Los Angeles, California, area between now and October 26, 2019, you can visit the FIDM Museum and see these and many other television costumes for free!  The exhibit is open Tuesday to Saturday from 10am to 5pm.