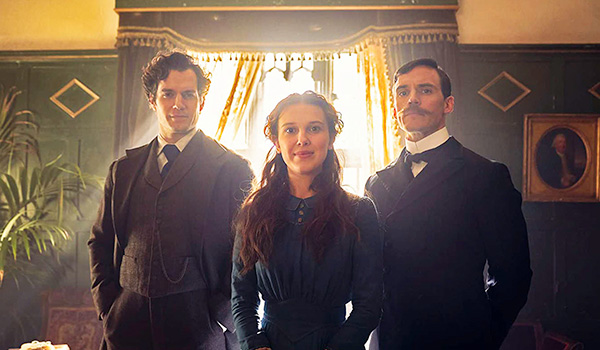 Raise your hand if you are / were a girl who loved pretty clothes and also loved running around and probably getting into a little trouble? Then Enola Holmes (2020), one of Netflix’s latest original movie offerings, is for you! Based on a young-adult mystery series by Nancy Springer, this feisty frock flick follows the adventures of Sherlock Holmes’ younger sister in an obvious but delightful setup for a movie franchise series.

Set in 1884, the story kicks off with 16-year-old Enola (Millie Bobby Brown) discovering that her mother, Eudoria (Helena Bonham Carter), has disappeared. So she calls her older brothers, Sherlock (Henry Cavill) and Mycroft (Sam Claflin), for help. Now, I’m on record as not being a big fan of mysteries, plus I know little about the Sherlock Holmes canon. So I was a bit put off by what a dick Mycroft was and how passive Sherlock was, and their interactions with Enola were not setup well with a big exposition about Sherlock being a super-detective (I knew that much, c’mon) and nothing about this jerkwad Mycroft.

Anyway, the story is all about Enola, and when she’s onscreen, it’s great fun and totally engaging. The movie may be aimed at a young-adult audience, but I enjoyed it and didn’t feel talked down to or like it was simplistic. Think along the lines of the Harry Potter movies in terms of tone, without magic. It’s a satisfying romp, and Enola, as a character, rides the line between believable and outrageous just right to feel sympathetic. The mystery plot is mildly entertaining, predictable but not dumb, and felt like a coat hanger upon which the charming characters were lightly hung for display.

The costume designer is the award-winning Consolata Boyle, which is another reason to enjoy watching this movie. Enola is supposed to be 16, and her wardrobe teeters between little-girl Victorian and 1880s bustle gowns. She’s an active character who rides a bike, plays sports, fights off attackers, and runs all around, regardless of what she’s wearing. Boyle spoke about the movie’s costumes in Fashionista, saying:

“One thing that was important for us was the feeling that it was created by [her mother] Eudoria. This feeling of a Victorian radical and a free-thinker. That’s how her mother brought her up and exposed her to advanced thinking and reading.”

We first see Enola in a more little-girl-ish outfit of a blue, loosely fitted dress, and Mycroft chides her for not wearing with a hat or gloves. Her hair is down as well, and the whole look emphasizes that she’s still a kid and she’s been running wild a bit under her mother’s non-traditional tutelage. 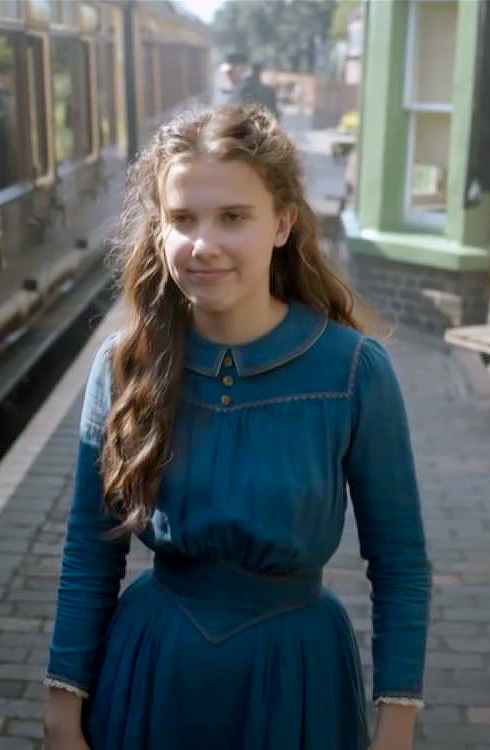 This is how she meets her brothers at the train station. 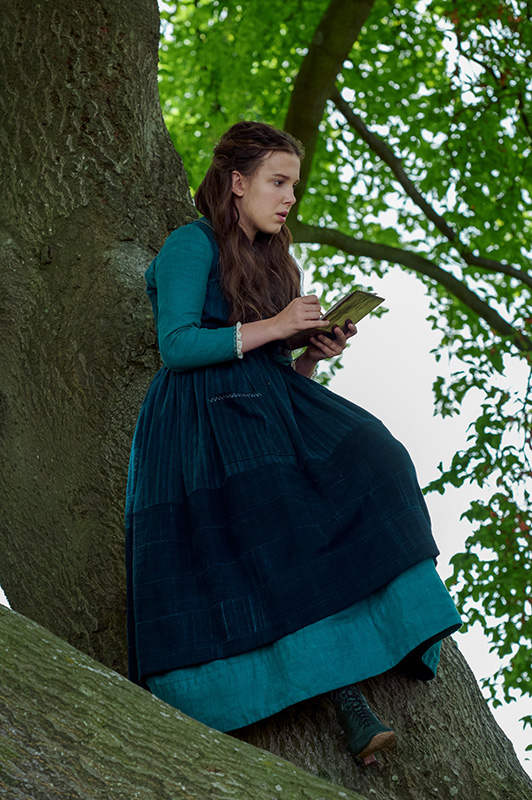 She adds a blue velvet jumper over the dress at one point. Photo credit: Alex Bailey / Legendary

Flashbacks show how she was raised to be independent, and her mother taught her archery, tennis, and jujitsu, among other things. 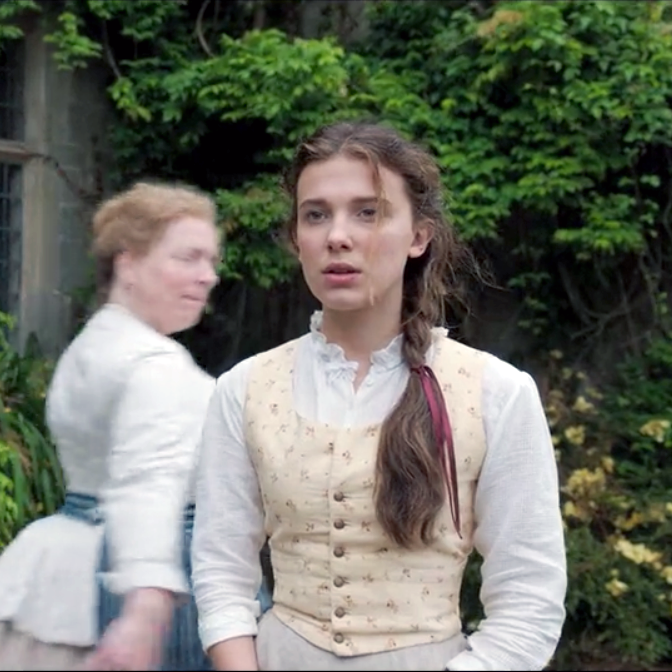 She wears this sporty waistcoat / blouse / skirt combo & sometimes has her hair in a practical braid or two. 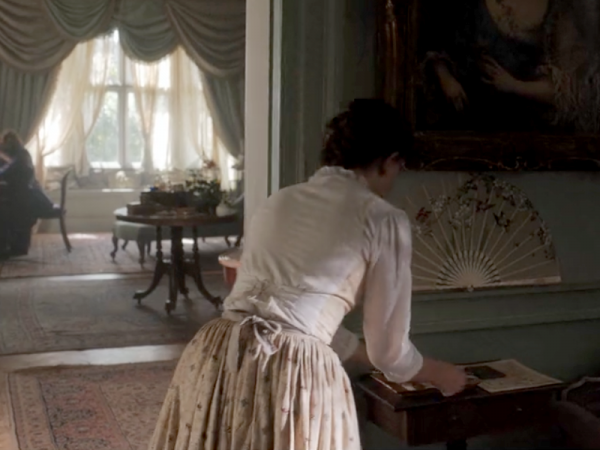 Eudoria is only briefly seen in these flashbacks, so her costume details are obscured. 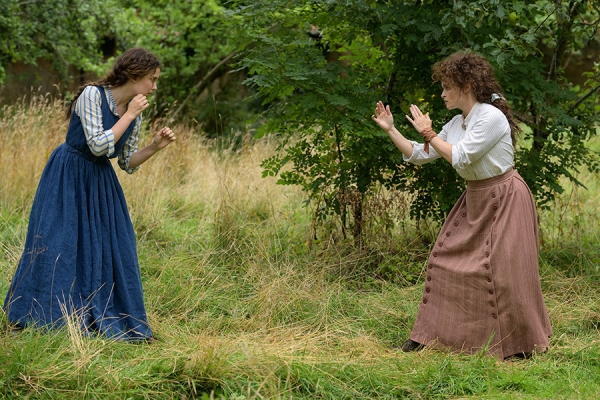 Enola has a sort of jumper dress, while Eudora has a walking skirt outfit. 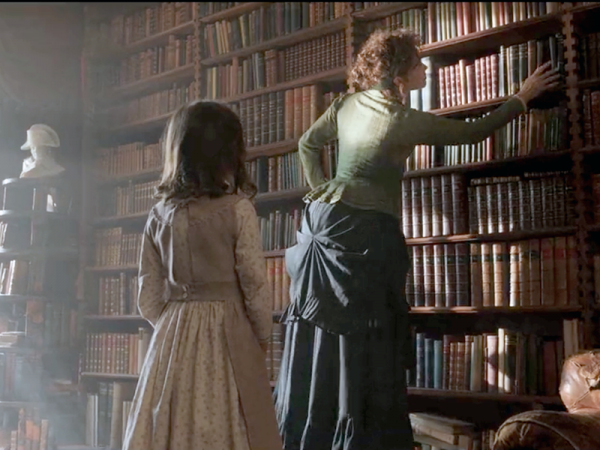 Flashing even further back, Eudoria wears a more fitted natural-form bustle skirt arrangement, & Enola is in a pinafore.

This looks like a princess-seam gown, popular right around 1880. 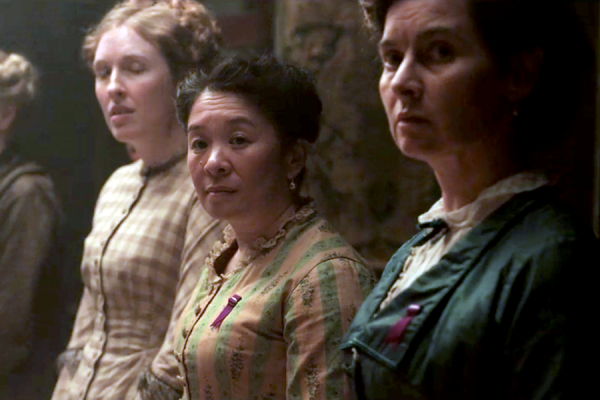 These women are meeting in secret with Eudoria, & their dark purple ribbons seem like a proto-suffragist sign.

Occasionally, Enola disguises herself in boy clothes, which are always explained as stolen / bought / borrowed from someone else. I have to say, I kind of hate that trope in movies because “borrowed” clothes tend to fit far too perfectly, and here it’s a petite female wearing the clothes of various adult men throughout the movie, and it always looks just right on her. 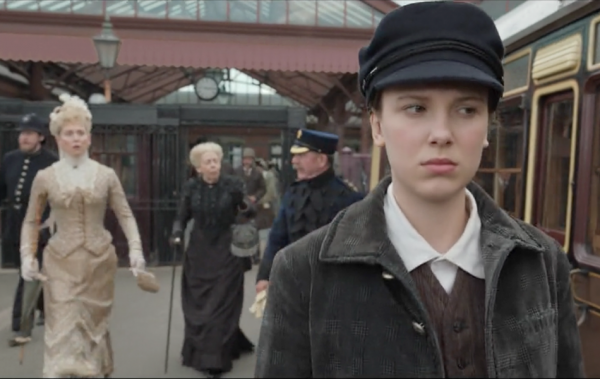 She supposedly stole these boy clothes from her brother Sherlock. In the background are the Viscount Tewkesbury’s mom & grandmom, in elegant 1880s dresses.

Let’s just note that Sherlock, as played by Henry Cavill, has such gigantically broad shoulders, and the actor thought he was a Victorian tailoring challenge. He reportedly said:

“I think it was pretty uncomfortable for Consolata [Boyle], the costume designer. It’s like, ‘How am I going to make these clothes fit?’ Like, c’mon, this is not the right build for a Victorian man. You know what? It’s no different from trying to squeeze it into a tight blue suit. In fact, they fit a lot more easily.”

So no, Eudora may have opened the trunk of “S. Holmes” to grab clothes, but whatever she found in there would not have fit her. 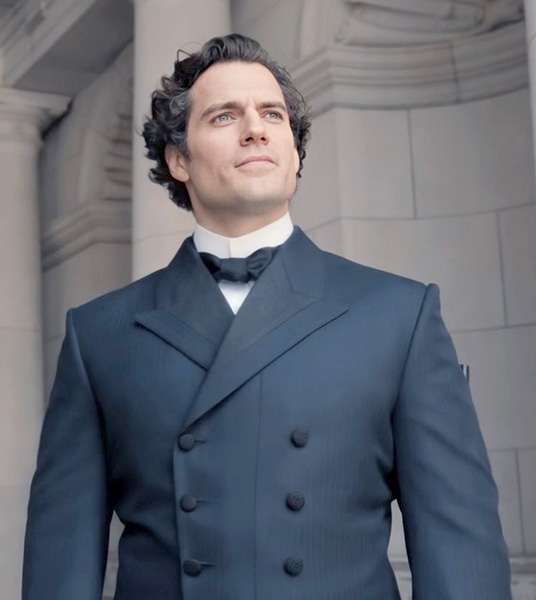 When she arrives in London, Enola acquires a complete lady’s gown, skin out, and we see all the historically accurate layers. 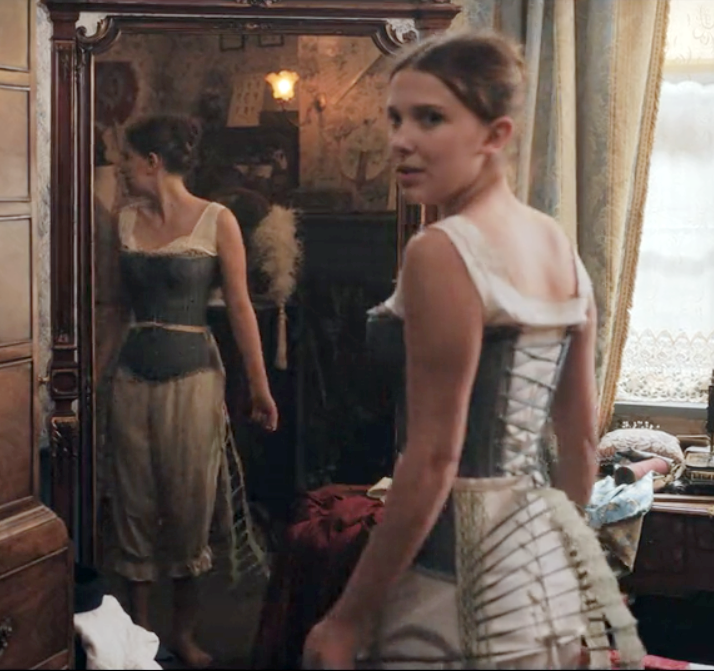 Armoring up with a corset & bustle!

“All of the kind of bits and pieces that go with the [dress], the bag, the little boots, the underwear, the crinoline, the bust enhancer. All of those implements that went into limit women’s lives toward the end of the 19th century, which is obviously going to start to change hugely with the women’s suffrage movement. The way Enola uses them to empower herself — she undercuts it — and it’s really witty and clever. Again, she doesn’t allow all the impediments of late Victorian dress to stop her from kicking some ass. She’s really able to go for it and give as good as she gets.” 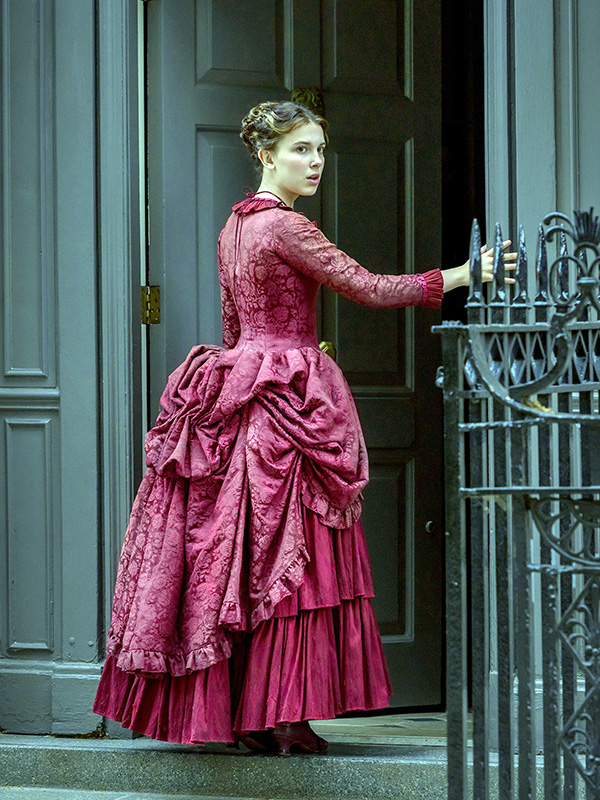 “The length is slightly shorter, so we see a little ankle. There’s an element of ‘you see her, you don’t see her,'”  Boyle said in that same interview. And, of course, the color was deliberately chosen, Boyle explained: ” I wanted red for courage, strength of purpose, and infallibility.” 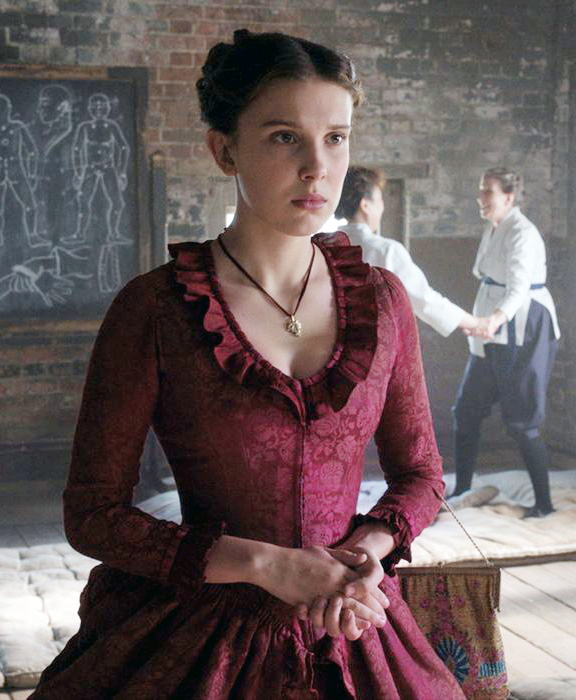 I did feel that the neckline of this main red dress was a bit off. A high buttoned-up front would be more typical for daywear, especially for a young lady about town. This looks like a dinner gown or maybe an afternoon reception gown. Minor quibble, and I’m sure this was done to visually open up her face in her big scenes.

On our last Free for All post, we were asked about the jujitsu outfits, so a quick Wikipedia tour showed me that jujitsu wasn’t brought to Britain until 1898 by a man named Edward William Barton-Wright, modern judo as a sport was invented in Japan in 1882, and aikido was developed in the 1920s. So the idea of a women’s martial arts academy in 1884 London is unlikely. IDK if the book series has some backstory about Eudoria knowing a jujitsu master who traveled from Japan and trained her and/or Edith in secret. But the outfits are plausible enough with loose knee breeches, thick stockings, soft flat shoes, and an Asian-style wrap top. It’s a modest and practical look for the time and activity. 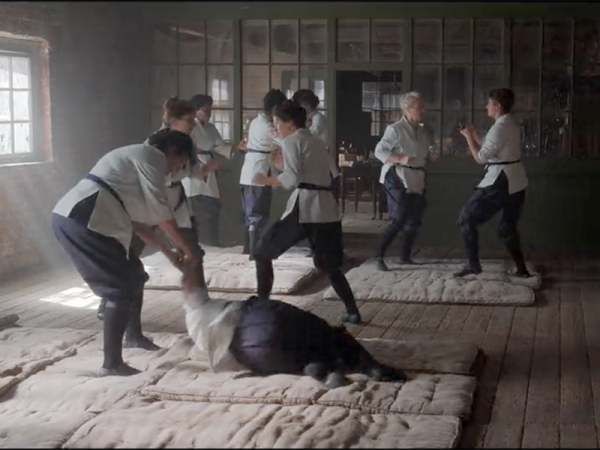 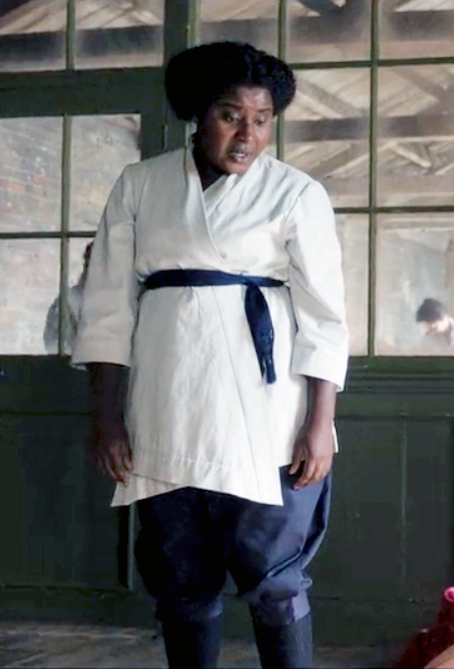 Edith in her martial arts uniform.

Nice cameo Susan Wokoma, who I immediately recognized from her enjoyably smart-ass performance in Year of the Rabbit (2019). She plays Edith, one of Eudoria’s co-conspirators. Her everyday outfit is perfectly proper. 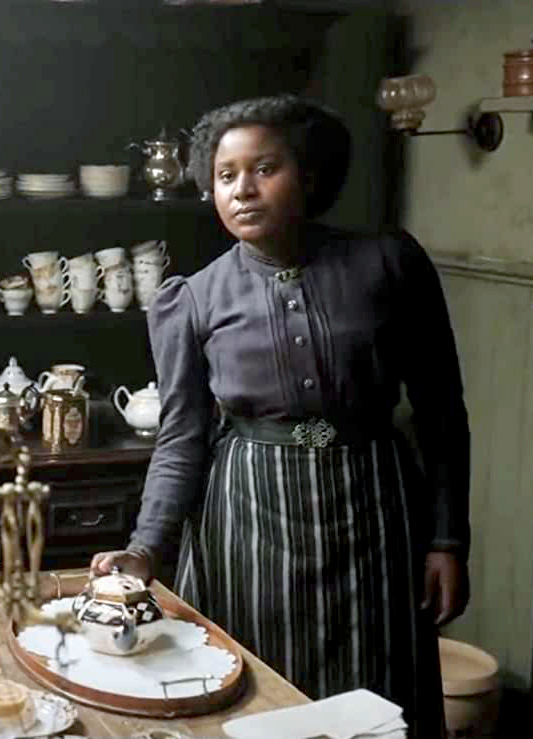 The purple & green stripes in her skirt remind me of suffragist colors.

One of the most elaborate costumes in the movie is a mere disguise, because Enola dons a full Victorian mourning ensemble to pretend to be a widow when she visits Basilwether Hall. 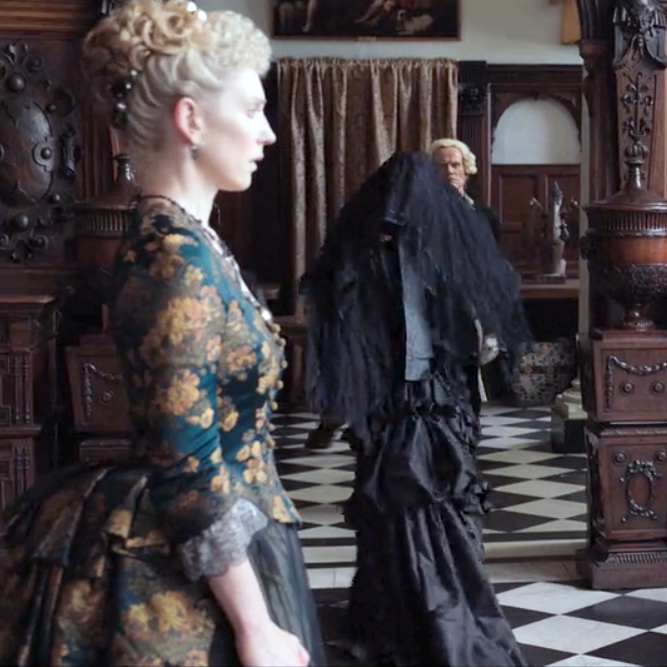 View of Enola’s train, plus a bit of Lady Tewkesbury. 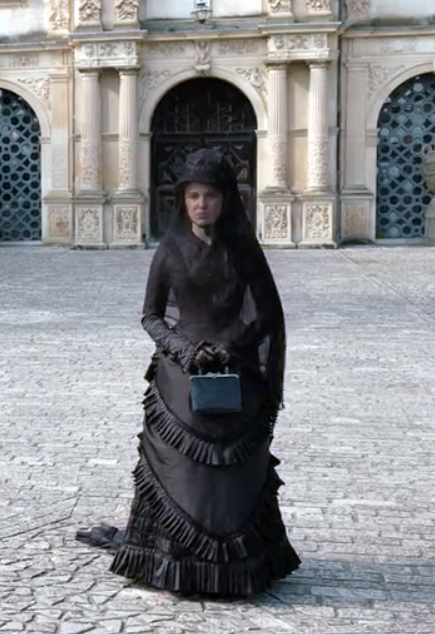 Full gown, so much pleated trim! 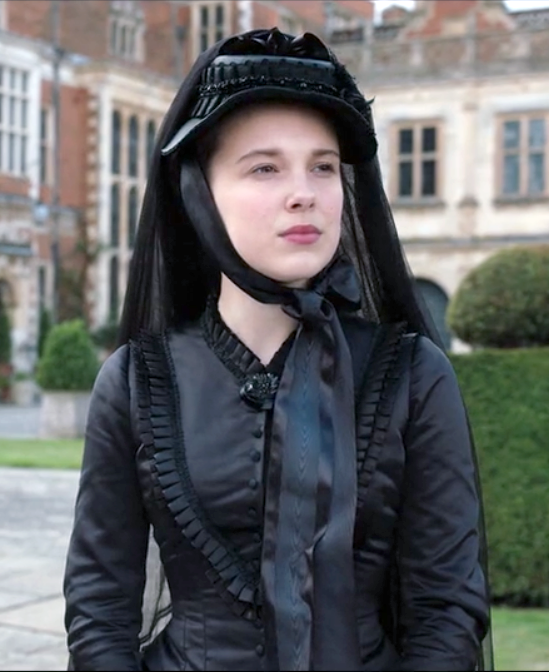 She has one more red dress, which I thought was the same as the first red one (the style is the same), but this is made of a nubby tweedy fabric. She also goes back to wearing her hair down. I’m not mad about it — yet. 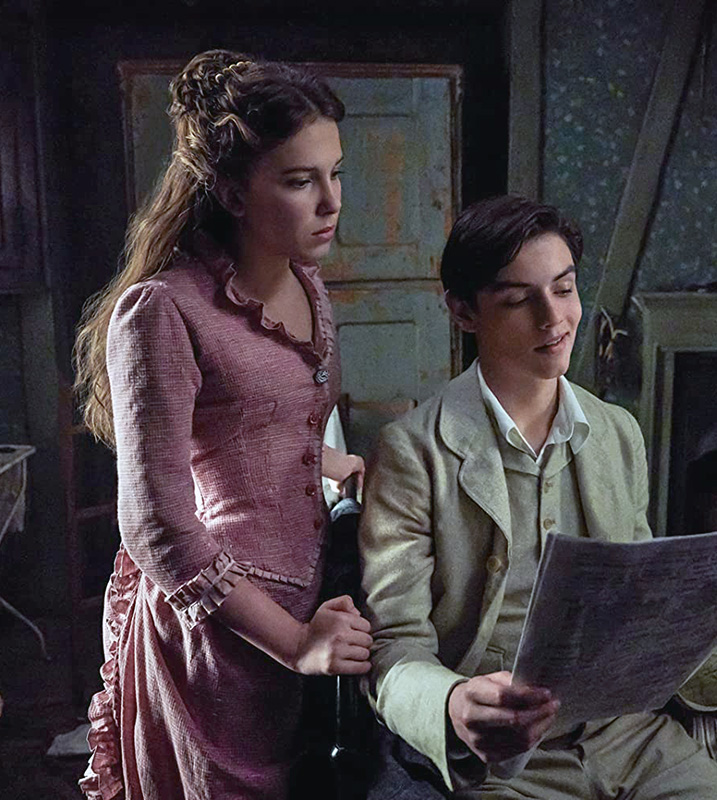 Enola’s last costume has an Arts & Crafts, almost Pre-Raphaelite feel in style and in shape is a somewhat grown-up version of her first dress. As Consolata Boyle said in Fashionista:

“Her final dress, which is a raw silk — untreated, completely natural — reflects the shape of the first dress we saw her in, when she was on her bike. The shape fulfills and closes the circle. … That shape and that purity of that color — the lack of intense color — and the freedom of that was very important, visually, to me just to end the film, as Enola cycles off into the future.” 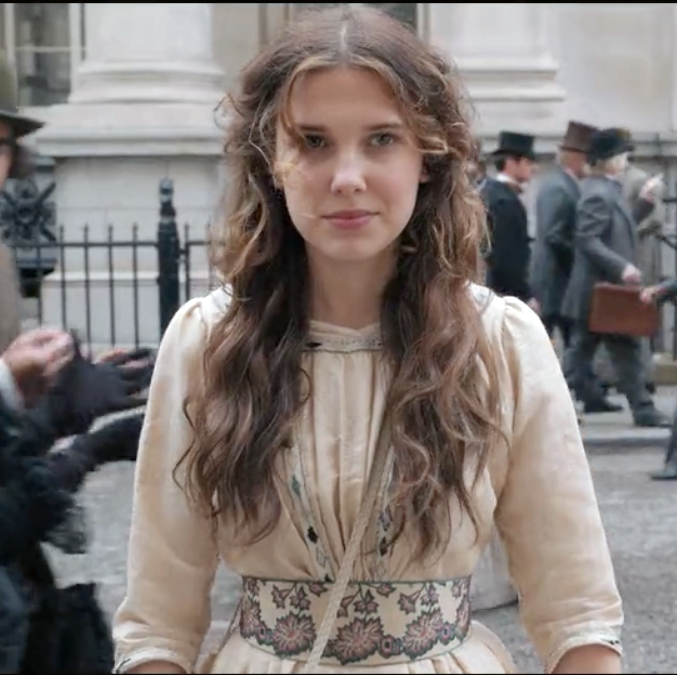 Her hair is a mess, but the dress trims show a nice Arts & Crafts influence. 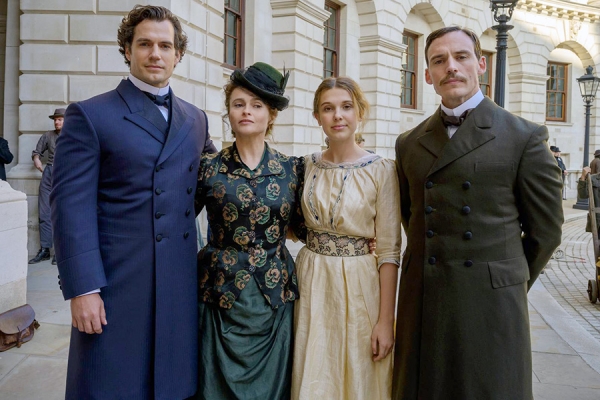 And Helena Bonham Carter gets a more interesting costume at the very end! 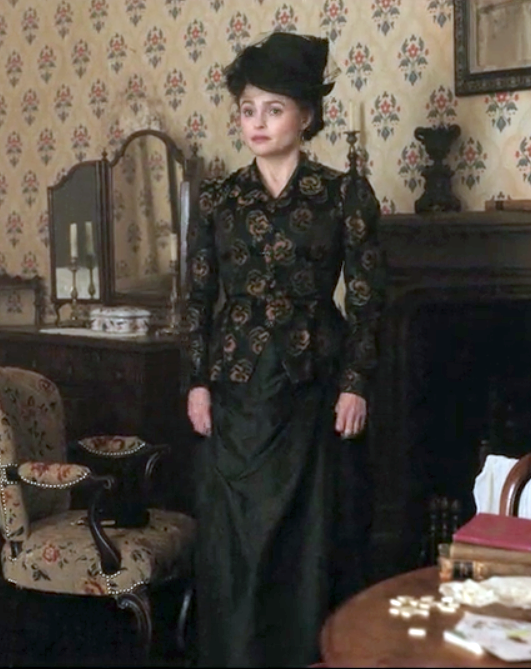 Still relatively practical, being a plain skirt with a jacket. 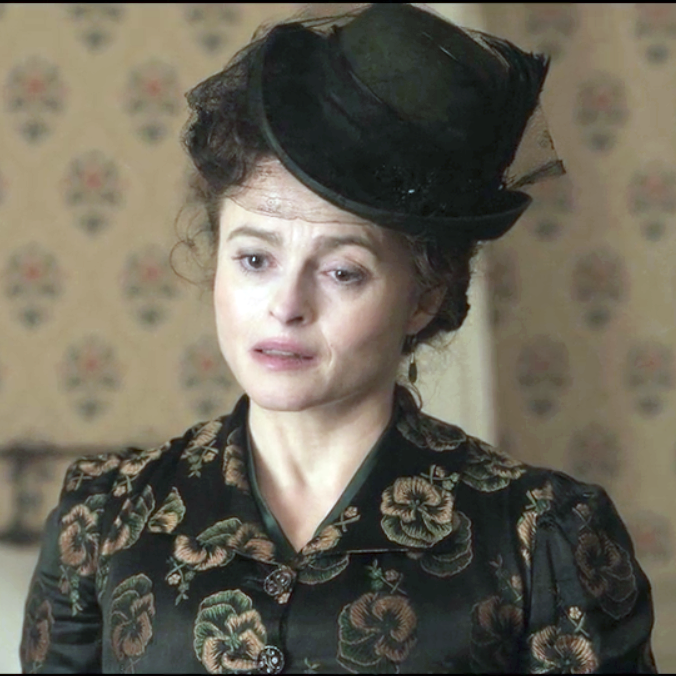 The pansies evoke the floral code she & her daughter have communicated through.

Have you watched Enola Holmes? What did you think — and will you watch future films in the franchise?