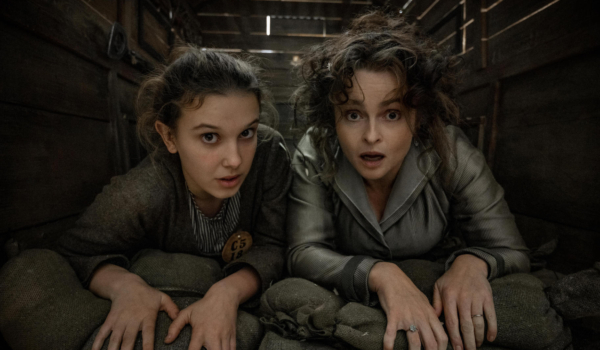 It was a little over 2 years ago that we reviewed the first installment in what is allegedly becoming a bit of a franchise, Enola Holmes (2020). The sequel dropped on Netflix recently, so I decided I should check out the bustle-kicking badass younger sister of Sherlock Holmes once more and see if the idea still holds up.

The good news: The film is a fun little romp, based around the true story of the Matchgirls Strike of 1888, which is neatly folded into a very Holmesian kidnap and murder plot. Enola, played by Millie Bobby Brown, is able to carry the brunt of the action and most of the plot, even when it’s straining plausibility, but we aren’t watching this movie for a history lesson, so it is what it is.

The meh news: The costumes really did not impress me this time around. Some of that could be because a substantial part of the film centers around Enola going undercover in a match-making factory as a match girl, so we aren’t talking fine silks and ribbons. Speaking of ribbons, Enola’s hair is long and free flowing for almost the entire film, including while she’s “working” at the match factory. Obviously, OSHA was not a thing in 1880s London, but those long, beautiful tresses would have been a definite no-no for factory work, even then.

But even when the investigation takes our heroine “undercover” (ish) to a fancy ball, the costumes just kind of looked flat. Almost no one was wearing the proper amount of petticoats and bustles were definitely not seen on the main female characters. This is sort of implied away as owing to Enola’s mother’s radical feminist ideals and the fact that they two of them, aided by her mother’s assistant, Edith, have some pretty epic fight scenes in which all that underwear would have been a liability, so. 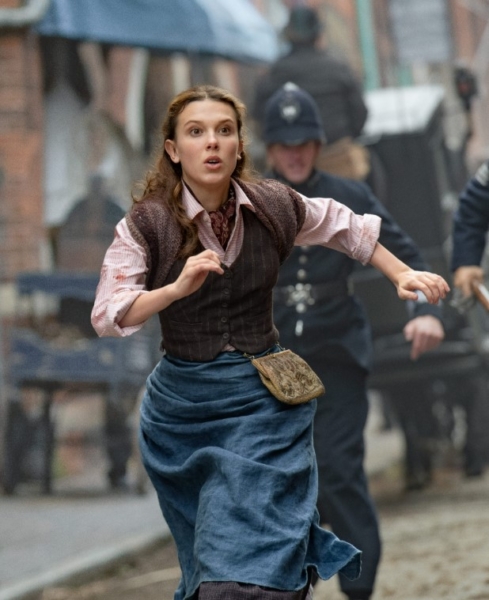 Enola cosplays as a match factory worker for most of the movie, and naturally does a lot of running, jumping, judo-ing, and climbing in and out of windows in this outfit. I’m not convinced the costume department had her in a corset, or if they did, it was very lightweight. But this fits with Enola’s reformist leanings. Thankfully, no “omg corsets were sooooo restrictive” nonsense in this film, either. Probably because no one was wearing them. 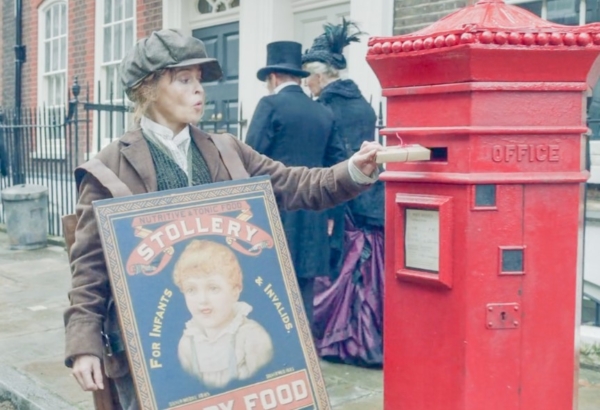 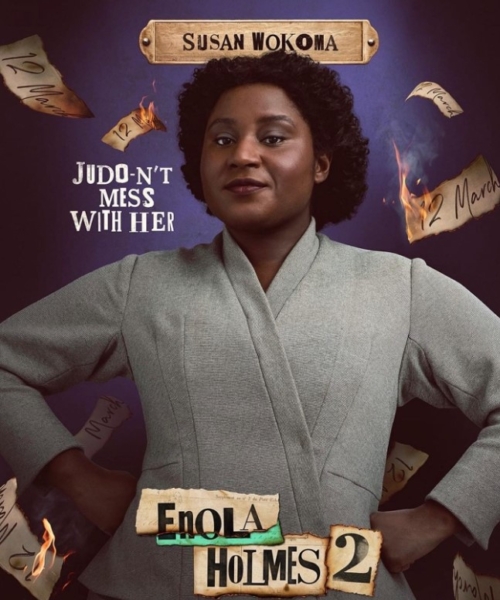 Edith (Susan Wokoma) has a more structured gi-style bodice that references the contemporary silhouette of womenswear in the sequel, compared to the much more traditional gi she wears in the first film. 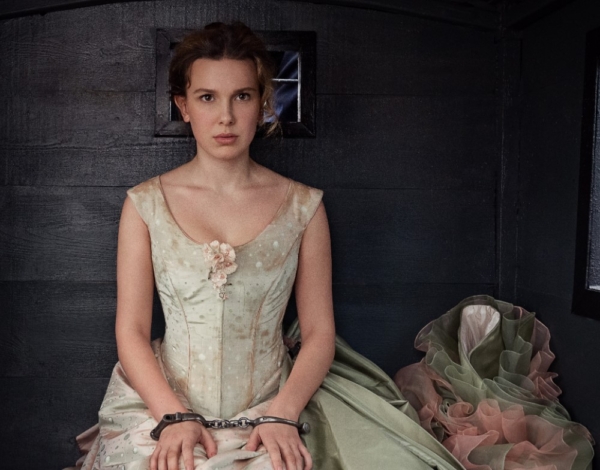 Enola finally gets a pretty dress, and she sneaks into the poshy ball where she believes answers to her mystery can be found. Of course, she gets snarked by bitches for her dress being “last season,” but whatever. That pale green and pink is so 1880s. 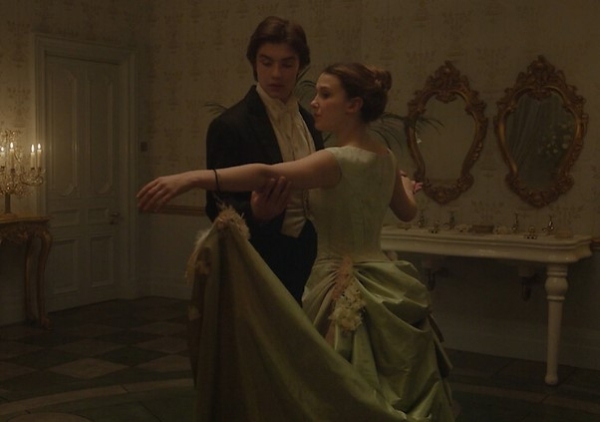 Time for a dance lesson with the young Viscount Tewkesbury who is still besotted with Enola, but is now a rather influential member of the House of Lords and therefore, potentially a useful ally for our heroine. Props to the costume designer for giving Enola a train holder. That bustle needs to be twice as big, however. 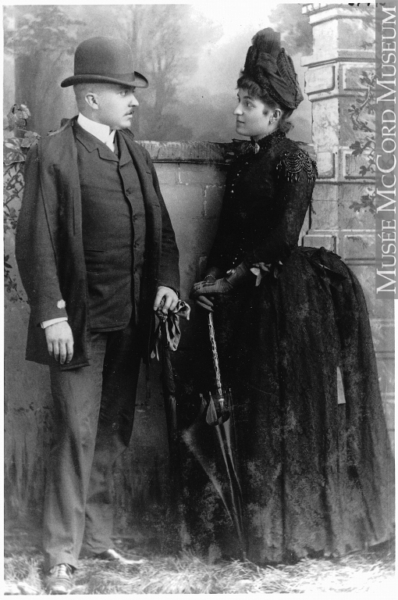 Here’s an example of the fashionable silhouette for women in 1888. And before you point out to me that Enola’s dress was from last season, and therefore it wouldn’t be as up-to-date fashionable as the other ladies at the ball, you should know that bustles were just as big in 1887. 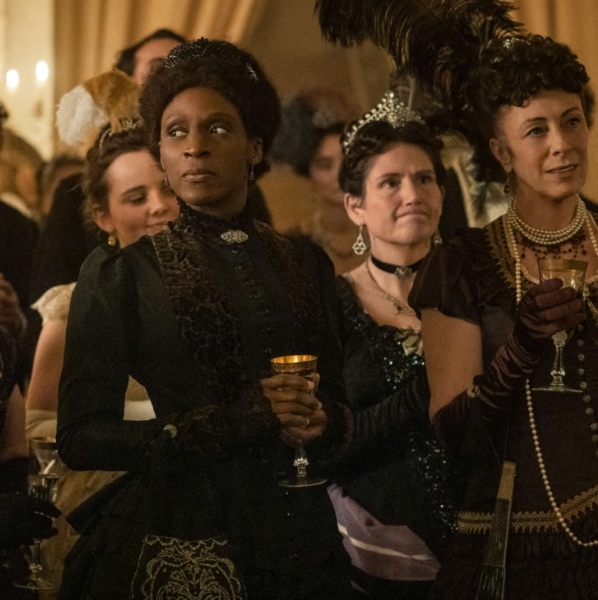 Mira Troy, the personal secretary to Treasury Minister Lord Charles McIntyre, provides Enola with some helpful advice at the ball, while wearing a really nice dress. However, she stands out as she’s not wearing a ball gown, and well, she’s the only person dressed all in black with jet jewelry. What is her deal, I wonder…? 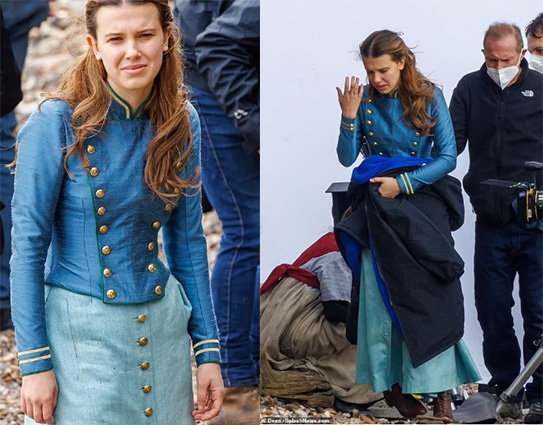 This is the one really noteworthy costume that Enola wears, but isn’t really showing up online yet, apart from these rather unflattering behind-the-scenes pap pics. Her “skirt” is actually a pair of culottes with a false panel in the front to make it look like a skirt. Seen from behind, you can see that they’re actually very full trousers. This was a style that is probably a bit too fashion-forward for the 1880s, but it was certainly common enough by the end of the next decade and carried on into the early 20th century. I actually have a photo of my great-great-grandmother wearing a pair of trousers in this style c. 1915.

All in all, this film is a fun little diversion with an uncomplicated story arc, and is worth the watch if you’re in the mood for something light but not utterly frivolous.