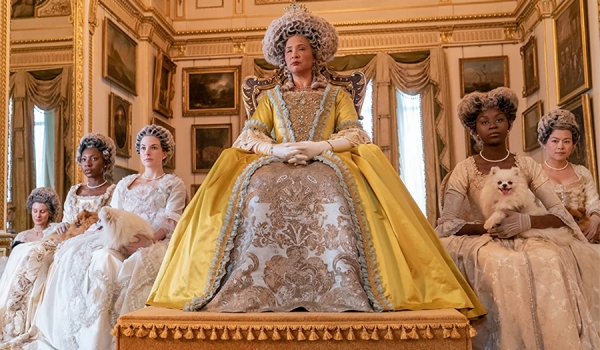 Yes, I am aware of the multitude of YouTube stars doing takedowns on the costumes in Netflix’s newest historical series, Bridgerton (2020), but I’m not here to talk about how bright eye searing prints aren’t historically accurate, or how Lady Featherington’s gown silhouettes are more 1913 than 1813, or even to wax tedious that yet again Hollywood is perpetuating the eternal corsets-worn-without-chemises myth … I’m here to address something that I haven’t seen really talked about and that Bridgerton does a good job illustrating.

That is some straight up Edwardian lewk, my dudes.

I think most of us reading this website are cognizant on some level of the double standard in historical costume movies, where every designer or director wants to put their stamp on a historical period to make it “theirs,” which leads to all kinds of ridiculous interpretations of period costumes that never actually happened, whilst simultaneously eschewing the actual weird shit that people used to wear back in the day. You could say that we have created this entire website around that discrepancy, without putting into so many words.

In fact, it wasn’t until I sat down and watched Bridgerton that I put my finger on what has always bugged me about historical films and TV shows, and that it all can be distilled down to this idea of creative license that Hollywood is allowed to take in order to push the visual impact of the costumes to one extreme or another, but there’s usually a perfectly good, and totally what-the-frock historical example that would have sufficed for any given period.

So yes, folks, I’m going to address Queen Charlotte’s massively outdated wardrobe in Bridgerton. Yes, I have read the interviews with the designer and the director and producer who all indicated that they wanted the Queen to be so, well, weird, compared to the column-shaped beauties that roamed her court, and therefore the decision was made to put her and her ladies in 1770s court gowns. Often cited in these articles is the fact that the historical Charlotte was considered by her contemporaries to wear outdated fashions well into the end of her reign. So, of course, it makes sense to modern people that she’s wearing clothes that are, by the time 1813 rolls around, close to 40 years out of date. This image from the show does a good job of illustrating that disconnect between the old regime look of the 18th century on the Queen with the fashionable young women wearing the columnar styles of the early 19th century.

But since this website is all about not giving a pass to these kinds of design choices … Consider this portrait of Queen Charlotte by Sir Thomas Lawrence in 1789: Her gown could be considered a little out of date compared to the fashionable gowns of her contemporaries, but her hair and accessories are fairly au courant. Now consider this portrait by William Beechey from seven years later: This is 100% on point for late 1790s English fashion. But there was some truth to the fact that Charlotte was regarded as being particularly ossified when it came to court fashion. In fact, the mark she left fashion-wise is far weirder than wearing clothing that is nearly half a century out of date and if the aim was to make her character look drastically different than the court around her, well, then you need to look no further than this: La Belle Assemblée, March 1806 “The Marchioness of Townshend in her full Court Dress as worn by her Ladyship on the Queen’s Birth Day 1806”.

This, my friends, is the unholy marriage between the full pannier (side hoops) popular in the 18th century, and the high-waisted silhouette of the Regency. Yes, this monstrosity was, in fact, the required uniform at St. James’ for the first decade of the 19th century. That means that every woman who came to court to be presented, or dance at a ball, or whatever else was required they do in attendance to the Queen, had to wear the full pannier at the ever-so-flattering under boob level.

This is not to say that I am not sympathetic to the fact that modern audiences’ credulity would be stretched to the point of breaking if, say, Daphne had her first scene wearing something like this. I understand why the decision was made to have the young women who make up the central story wearing perfectly elegant Regency inspired frocks. But … it’s just … YOU GUYS HAD THIS FABULOUS OPPORTUNITY TO PUT THE QUEEN IN SOMETHING HISTORICALLY ACCURATE AND RIDICULOUS AND YOU DIDN’T TAKE IT!!! Charlotte’s gowns were a missed opportunity, in my not so humble opinion.

Contrast this with the frocks designed by Tom Pye for Gentleman Jack (2019), where no opportunity to push the costuming into some VERY weird places was missed, and Pye puts it perfectly: The 1830s were a deeply weird time in fashion.

If you are interested in reading a nice, succinct article about court fashions during the time of Bridgerton, I highly recommend checking out Candice Hern’s article Court Dresses: Overview. The romance novelist (who has done a great deal of historical clothing research) gives some very good details about the court gowns featuring high-wasted panniers, as well as offers several images from her own collection of various early-19th century court gowns.

Do you think an opportunity for maximum weirdness was missed in Bridgerton? Share your thoughts in the comments.