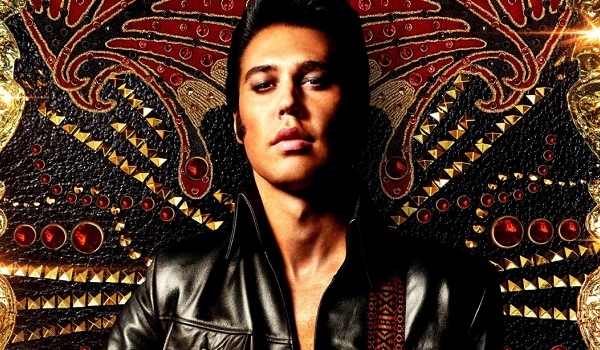 Elvis (2022) is a biographical film by Baz Luhrmann, starring Austin Butler in the title role as the King of Rock ‘n Roll. The film is narrated and told from the point of view of “Colonel” Tom Parker, played by Tom Hanks, and it takes some interesting liberties and sideswipes historical facts on occasion in order to make for a good story. Honestly, what else would you expect from Luhrmann? It’s a musical spectacle full of gorgeous, dreamy visuals and a relatively lightweight plot, but because the film straddles our 1969 cut-off date, I was concerned it wouldn’t have enough pre-1969 costume content to merit a discussion on this blog. I shouldn’t have worried, because there is quite a bit to discuss about the film’s costumes (designed by Luhrmann’s wife and frequent collaborator, Catherine Martin) that deal with the first 10 or so years of Elvis’ career, all with the added side benefit of Austin Butler being total eye candy. 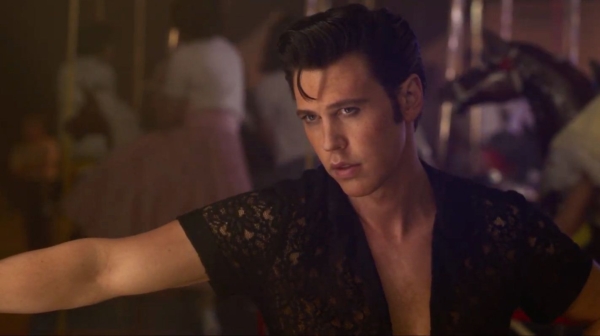 I loved the assortment of lace shirts that Austin Butler wears in the film.

Martin took a very nuanced approach to designing the costumes for Elvis, setting out to recreate some of Elvis’ iconic outfits, such as the pink plaid blazer he wore on an early TV appearance, and the black leather “comeback” ensemble from his 1968 TV special, while also designing looks that draw inspiration from Elvis’ extensive wardrobe without being exact copies of any one thing.

Pink and black was a color combination that Elvis frequently wore throughout his career. 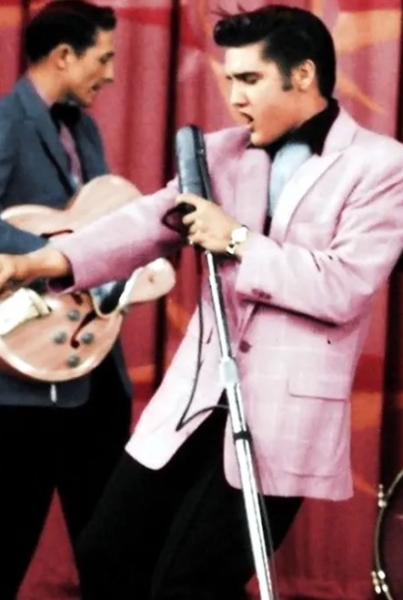 The original suit. The undershirt Elvis wears appears to be white with a black collar, but in the film it’s substituted for black shirt and black slacks, which contrasts dramatically with the pale pink blazer. 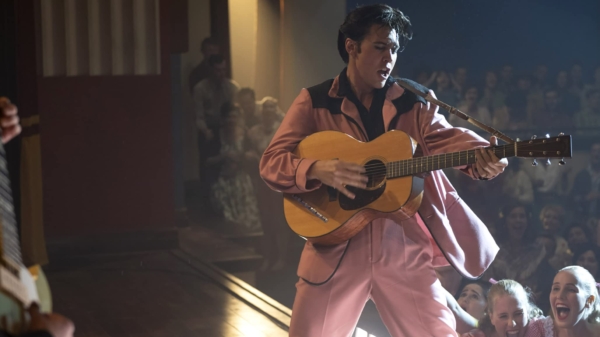 This was one of the suits Martin designed that is not based on any particular outfit Elvis wore, but referenced the style and color combinations that he preferred in the early part of his career. She said it drew inspiration from elements of Black performers popular in Memphis, who Elvis admired. 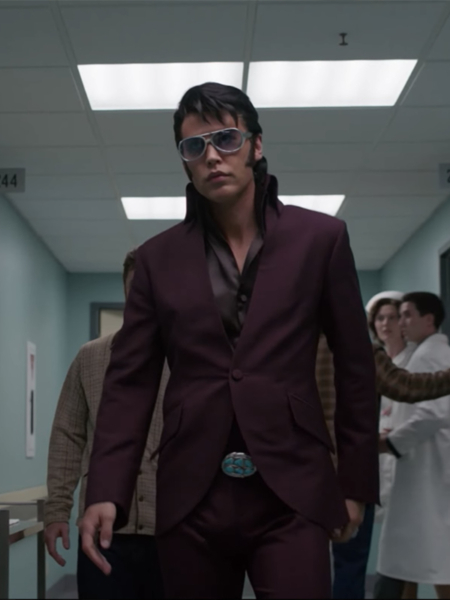 Another example of a late-1960s outfit from the film that Martin designed based on various elements of the type of outfits Elvis wore at that time. It’s extremely fitted, in stark contrast with the earlier 1950s fashion of loose suits, but still draws inspiration from African-American fashion. 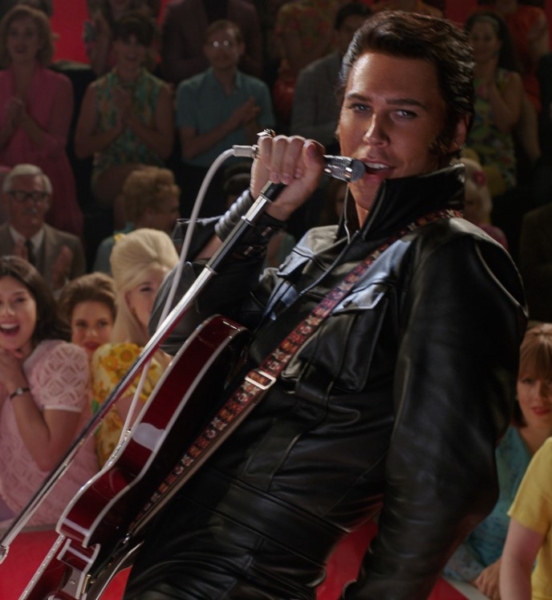 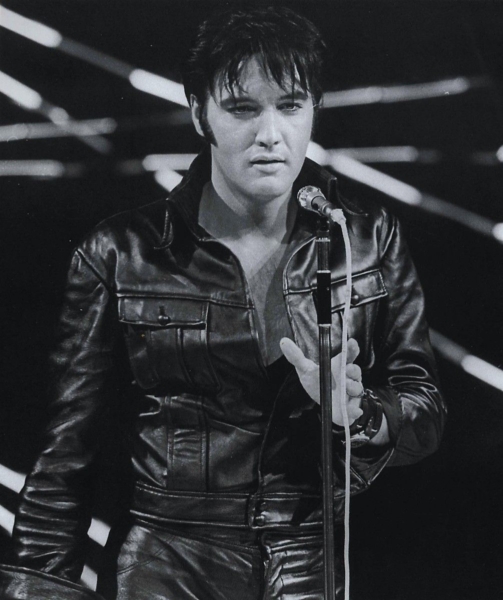 It’s a fairly faithful copy of the original suit worn by Elvis in his 1968 televised comeback concert, which Martin thought was important to get right since it is such a major turning point in the singer’s career. That said, the designer was careful to make subtle tweaks to things like the height of the collar and the length of the pants to suit Austin Butler’s proportions.

Another thing the film doesn’t shy away from is the obvious influence African-American performers such as B.B. King, Little Richard, and Sister Rosetta Tharpe had on Elvis’ music and especially his early image. B.B. King, in particular, plays a rather more embellished role in the film as Elvis’ friend and confidante, and a run-in with Little Richard at Club Handy, a Black-owned nightclub in Memphis that Elvis frequents, serves to underscore the way that Elvis profited from Black style in his clothes, music, and movements throughout his career. 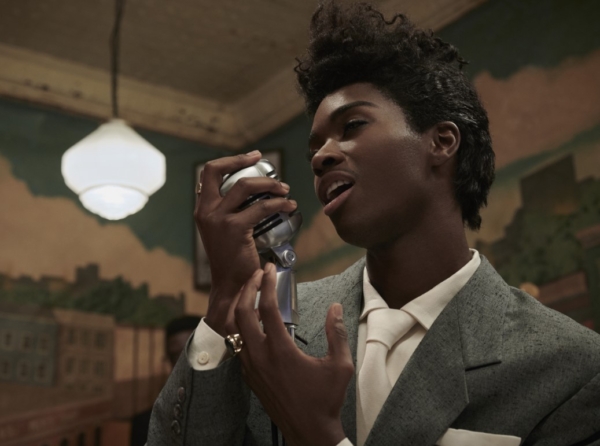 Alton Mason plays Little Richard in one pivotal scene where the film links Richard’s style to Elvis’ budding image. Elvis’ pompadour hairstyle, signature eyeliner, and flamboyant dance moves are traced to elements he observes in the Black community around him in Memphis in the 1950s. 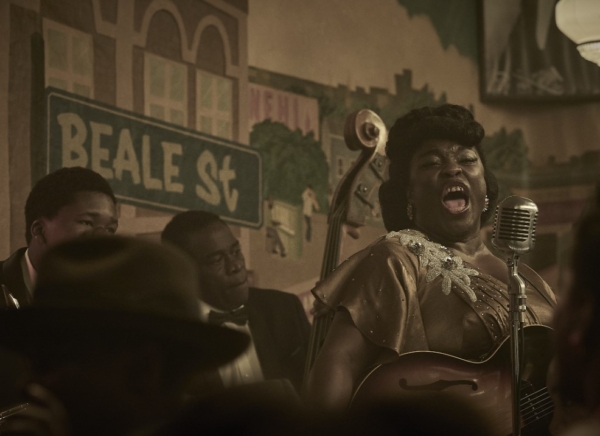 Yola plays Sister Rosetta Tharpe in the film. Black glamour leaves an indelible mark on the impressionable young Elvis and he appropriates it into his own stage act, earning him lifelong fame while many of the Black performers he drew on for inspiration did not fare as spectacularly.

There are other noteworthy costumes from the film that I want to highlight, such as the Nudie-esque suits of father-and-son musicians Hank Snow and Jimmie Rodgers Snow, who were repped early on by The Colonel when Elvis was signed on: 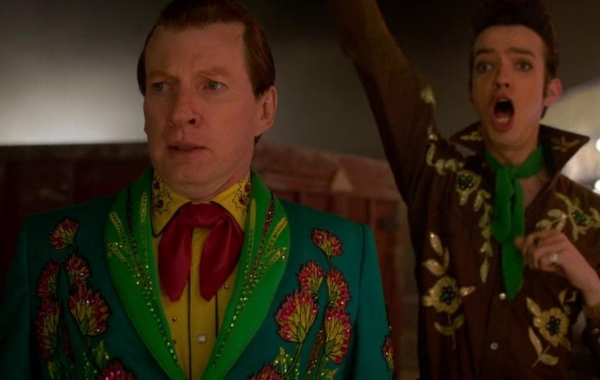 The Snows wear rhinestone suits, a nod to the trend in country-western music set in the 1940s by performers like Tex Williams.

They represent the passing trend that was already wearing thin on the Colonel by the early 1950s as he hunts for the next big act. In reality, Hank Snow enjoyed a successful career spanning 50 years, but the film makes it seem like he was headed for nowheresville once Elvis Presley appears on the scene. It is true that Snow and Parker parted on very bad terms, however, with Snow remarking that Parker “was the most egotistical, obnoxious human being I’ve ever had dealings with.” BTW, “Nudie” suits make a comeback in Elvis’ later career, with the tailor making some of his iconic rhinestone suits from the last several years of his career. (I could write an entire dissertation on Nudie Cohen and his protege Manuel, and their influence on early rock ‘n roll, FYI. It’s kind of a weird nerdy rabbit hole I know way too much about.)

The costumes worn by actress Olivia DeJonge, who plays Priscilla Presley, definitely evoke the type of fashions the real Priscilla favored in the 1960s and 1970s, during her marriage to Elvis. Again, some are fairly faithful copies of actual outfits worn by Priscilla during important points in the story, while others are more evocative. 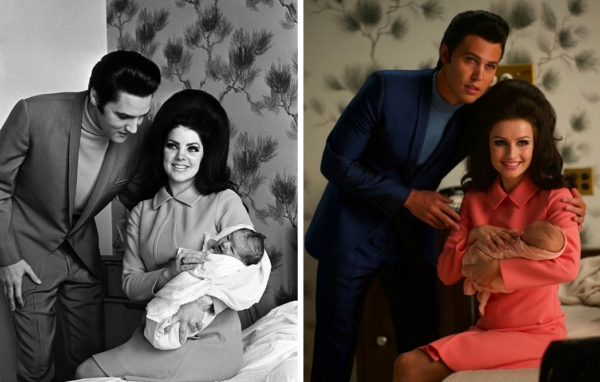 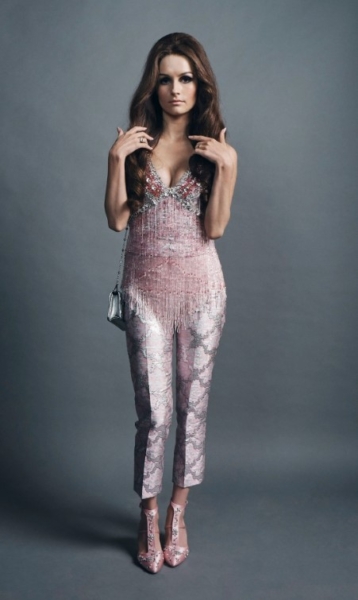 Many of DeJonge’s costumes were co-designed by Miuccia Prada. They evoke the glamour of the era without be slavish copies of extant outfits. 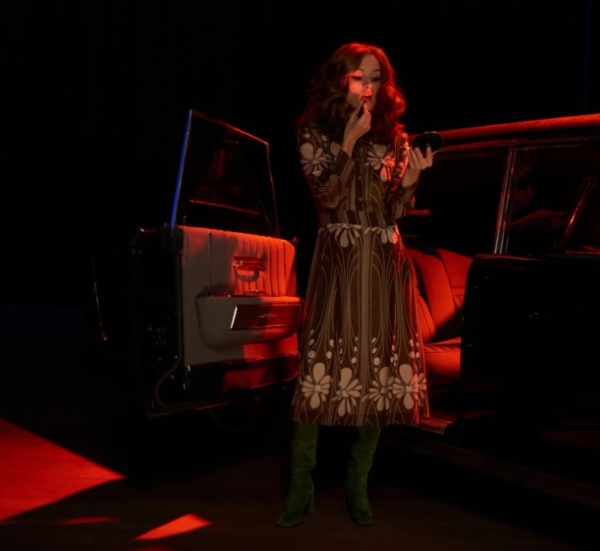 This is from a post-1970 scene, but I love this dress with the green boots, so, so much.

What did you think of Elvis (2022)? Share your thoughts in the comments!