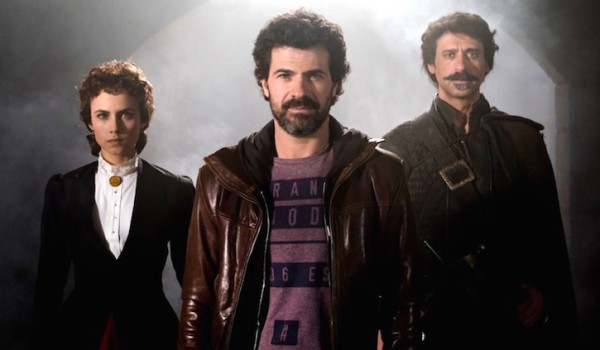 Alright, alright — all you people who have heard my love of Timeless keep telling me to watch El Ministerio del Tiempo aka The Ministry of Time, the Spanish show with the similar concept — time travel to multiple eras in history. El Ministerio predates Timeless (it premiered in 2015) and was no doubt inspiration; the basic concept is three people from different time periods (2015, 1880, and the 1560s-ish) are recruited by the secret Spanish government agency el Ministerio del Tiempo to travel through time to “fix” history.

The ministry was set up during the reign of Isabella of Castile, when a Jewish rabbi gave the queen a book showing her the many (literal) doors that exist between various time periods. I’m a little confused as to why the ministry exists — there’s at least one modern rogue agent going back in time and messing things up, and unofficial/unknown time doors that naughty people can go through and again, mess up time. The ministry is staffed by people from all time periods, but they all go home to sleep each night, which confuses me — the show emphasizes that spending one day in 2015 will mean one day has past in “your” period, so does that mean that the door to, for example, August 1, 1980 will then be August 2, 1980 the next day? Anyway. These are things I think about.

There’s some great humor to the show. The ministry is a real ministry, with budget cuts and grumbling workers (“We should just go back to the 16th century if they’re going to keep cutting our healthcare” type bitching). The 2015 character scoffs at the idea of Spain, of all countries, having invented time travel. Velazquez works there as a sketch artist, among other things; he spends his free time (getting in trouble for) writing letters to editors complaining about the shitty restoration work being done on his paintings and studying Picasso; and while we haven’t seen it yet, there’s references to a costume department and hairdresser, which made me very happy. Julián, seeing the drawing of the suspects by a sketch artist: It’s them. It’s exactly them. He is very good. Salvador: How could the fucker not be good? He is Velázquez.

Our main characters are Julián, modern EMT mourning the recent death of his wife; Amelia, Spain’s first female university student (from 1880); and Alonso, played by the hilariously named Nacho Fresneda, a soldier from the late 16th century. I already have a crush on both boys.

So now, let’s take a look at the historical costumes in the four episodes I’ve watched so far. You may know already that I have questions, many of them hair-related. First of all, the red dress has a weird neckline. Secondly, I’m glad Irene decided to blend in by making sure her smokey eye was on fleek. Thirdly, wtf with Amelia’s hair. I have literally spent all four episodes staring at its unfortunateness. I feel like someone looked at late 1870s/early 1880s hairstyles and assumed that ALL those curls on top of the head were short, bang-length curls. Portrait photograph of the Princess of Wales (1844-1925), later Queen Alexandra, c. 1880, Royal Collection Instead of what I think they are, the front portion being short, the back just being long hair styled into curls and poufed up. Princess Louise, Marchioness of Lorne, 1887, Royal Collection

You’ll see lots more of what I’m talking about below, as Amelia sports mullet after mullet (okay, at least they PUT HER HAIR UP! Hallelujah!).

After our three mains get recruited, they go to 1808 to stop the (too early) killing of Juan Martín Díez, Spanish military leader against the French. They need to blend in at a tavern, and a war’s going on, so nobody is fancy. Our boys are in black with rakish cravats, Amelia wears a striped jacket and skirt.

But I think for Amelia, they are trying to keep her looking like an average woman, so are more referencing salt-of-the-earth-type styles, like: There’s also a definite 1780s-90s maja element to Amelia’s look, which for all I know was still around in the later 1800s, given that the less well-to-do tended not to dress in the most cutting-edge of styles. The majo (men) and maja (women) were a very typical and unique look worn by the working/lower classes, particularly in Madrid. For women, there’s a lot of jackets, and details on the sleeves. It was an over-the-top look that was very swagger-y. On top of Amelia’s mullet: I think they are referencing these kinds of caps worn by maja women, which sometimes appear to have been crocheted; maybe they were made in lace too, I don’t know! Bad double agent Lola is a marquise in this episode and wears more fancy styles, but you really don’t see much of them except: The Spanish Armada is getting ready to take off for England, except famous Spanish writer (don’t kill me, I’d never heard of him before!) Lope de Vega isn’t on the ship he’s supposed to be on (and thus will probably die in the ensuing debacle). The ministry keeps agents in various time periods to keep an eye on things like this, and there are special cell phones and laptops that work across time. Who knew!

Amelia gets a sleeveless, boned bodice and some layered skirts: Again, not going for upper class. You tell me if women went sleeveless in late 16th c. Spain. Our gents are in a lot of layered black (again), and ALL the guys are in over-the-knee boots, of course. I strongly suspect metal grommets on the barmaid extra there. Although not the focal time period of this era, there’s a bit where Julián and Amelia have dinner with her parents in 1880. Amelia has this sleeved cape that just seems very 1940s-shoulder-pad-y to me. The main focus, however, is 1491. A lawyer representing the Jewish rabbi who was burned at the stake after giving Queen Isabella of Castile the secret book of time traveling doors has shown up in 2015 and threatened to out the ministry. Our guys go back to 1491 to try to prevent said stake-burning.

Michelle Jenner of the Spanish TV show Isabel, which I tried to watch and couldn’t handle the shitshow that were the costumes (I WILL convince Trystan or Sarah to review it one of these days, there’s a bit of my snark in this behind-the-scenes post) reprises her role as Queen Isabella, complete with ye oldey timey dresses straight from Simplicity patterns and head necklaces galore (but only two hairpins): Unfortunately our cast members go super monk/covered up, but there’s some extras to look dubiously upon: Ok, the balzo (big head thingie on the lady on the right) is good, I think?

Like I said, I’ve already got crushes on the two main leads, so I’ll definitely be finishing out the season (only season 1 is available on Netflix — come on, gimme more!). And it’s too much fun to jump around eras, so look for reviews of later episodes soon!

Have you seen El Ministerio del Tiempo yet? What do you think about the costumes from these episodes?