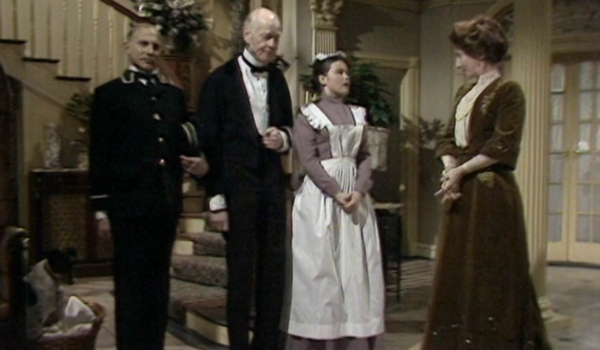 I’ve been working my way through The Duchess of Duke Street (1976-1977) which is streaming on Amazon Prime Video currently. Normally, I am not a big fan of Edwardian costumes, so when I sat down to start the series I wasn’t banking on the costumes drawing me in. Instead, I had heard over the years about how good the series was, mainly in reference to Gemma Jones’ eponymous “duchess,” a self-made woman who rises through the ranks of society to become a world famous chef and hotelier.

Jones’ character, Louisa Trotter, is heavily based on a real woman by the name of Rosa Lewis, who purportedly got her start in her career after becoming one of Edward VII’s numerous mistresses. The series was created by the same team as Upstairs, Downstairs (1971-1975) and follows a similar format, but with the focus on Louisa, who moves between both strata of society with relative ease (although not without bumps along the way). And if you’re any kind of foodie, this show delivers a nice snapshot of early 20th-century cuisine to tempt your palate (and no, it’s not all jellied eels).

The costumes were designed by Betty Aldiss, with the usual 1970s BBC attention to period detail that we all expect from this era. I’ll admit, once Louisa moved out of the kitchen as an assistant cook and started ascending the ranks of high society, the costumes became a lot more interesting. I even found myself developing something of an appreciation for the era’s aesthetics, as it moved from the tail end of the Victorian era, into the Edwardian. The full breadth of the series covers the very last year of Victoria’s reign all the way into the 1920s, but I haven’t yet gotten out of the early 1900s (I’m probably around 1905, give or take, 8 episodes into the first season). Typical working wear for Louisa when she’s on the clock. But don’t be fooled by the prim apron, Louisa is a woman who likes a good time. Lacy and feminine blouses and skirts don’t do much to hide Louisa’s fiery personality. Louisa’s outfit when she does the morning shopping at the local market is a smart and subdued jacket and skirt in brown wool, with a crisp white shirtwaist and stylish hat. Louisa’s right-hand woman is Mary (middle, played by Victoria Plucknett), and her doorman, Starr (played by John Cater). Both characters are developed over the series with interesting side plots and backstories. If Edwardian women’s fashion is your jam, you can’t do much better when it comes to eye candy than this show. One of my favorite costumes for Louisa so far is this white silk dress with black dots and black edging on the collar and sleeves. It was hard to get a good full length shot of it, unfortunately. The back view of the dress, showing the interesting detailing around the yoke, and the fact that the fabric is actually cream with a self-stripe and black woven dots. Really, really classy. Louisa isn’t the only character to get interesting clothing. Many of the guests at the Bentnick Hotel have fabulous wardrobes to suit their poshy position in society. Louisa wears a dark blue silk gown with black lace inserts in this scene. Alas, the film quality is poor, but that’s the trade off with these old BBC films … The costuming and sets are spot-on, but the fact that many of these shows were recorded from the broadcast, not from the original film, means the quality is less than desirable. Can you believe there was a time where we didn’t think there was anything wrong with this? Louisa wears a creamy white satin evening gown in two different episodes. The interesting thing is that she first wears it with her first meeting with then-Prince Edward as his mistress, and then pulls it out a few episodes (years) later to wear for another rendezvous with a different suitor. Another one of Louisa’s daywear looks. The slight pigeon breast to the front of the bodice and the fuller sleeves are spot-on for the early-20th century. I especially liked Louisa’s morning gown in this scene. The show does a very good job of putting Louisa in all the various styles worn throughout the day for an upper-class woman.

Have you watched The Duchess of Duke Street? Share your thoughts with us in the comments!