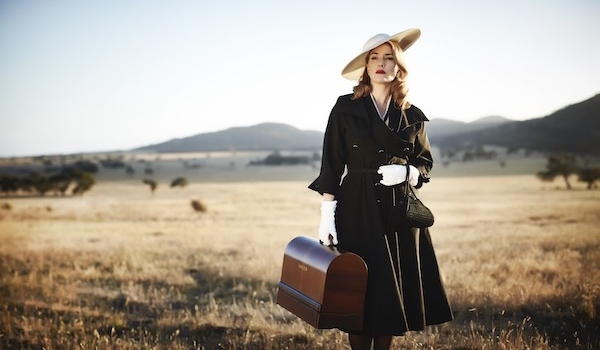 Attention all American historical costume movie fans! Kate Winslet‘s 1950s-set The Dressmaker FINALLY opened in US theaters this past Friday. I got to see a sneak peak, but I promised a fuller review and here it is!

The Dressmaker is an adaptation of a modern novel. Winslet plays Tilly, who grew up in a small town in remote Australia. Some kind of childhood tragedy occurred, and Tilly left town. In the intervening years, she moved to Europe and studied and then worked with many famous couturiers. Now, she’s back in town with her sewing machine, determined to reconnect with her mother (the fabulous Judy Davis) and figure out said childhood tragedy. Along the way, she both reinvigorates her hometown AND gets revenge on all the bastards what did her wrong, and hooks up with a local cutie (played by Liam Hemsworth).

I found the film enjoyable, although I wasn’t totally convinced by the romantic aspect of it (and I think it would have been better without it). Nonetheless, both Winslet and Davis are hilarious and touching, and if you like either/both actresses and/or 1950s costumes, you’ll want to see this film.

Costumes in The Dressmaker

What’s interesting about The Dressmaker, from the how-the-costumes-were-designed-angle, is that there were, unusually, TWO costume designers for the film. Margot Wilson designed Kate Winslet’s costumes, while Margo Boyce handled all the other cast members. According to Boyce, this division of labor made a lot of sense: “When you’ve got someone (like Tilly) who’s actually got 30 odd outfits themselves, and then the rest of the cast, it’s actually, you can’t give enough space and time. I’d never worked with Margot before, she’s got a terrific body of work. It was actually quite a good way to do things” (Costuming The Dressmaker).

Wilson’s task was to show how different Tilly (Winslet) was from the rest of the town (The Dressmaker’s Maker). Both designers agreed that, according to ClothesOnFilm.com, “Tilly should be more restrained, so ‘nothing too flouncy,’ with strong silhouettes and strong dual colours (like red and mustard, purple and green) as well as black – a far cry from what the rest of Dungatar [the small town] was wearing. ‘We wanted to keep her simple and structured and, you know, effortless,’ says Wilson. ‘Keeping in mind too, Tilly is a couture dressmaker – that’s how she’s portrayed – not necessarily a French designer. So it had to, while making her look fantastic and spectacular, (it couldn’t) sort of take her into the genre of being portrayed as a designer'” (Costuming The Dressmaker). 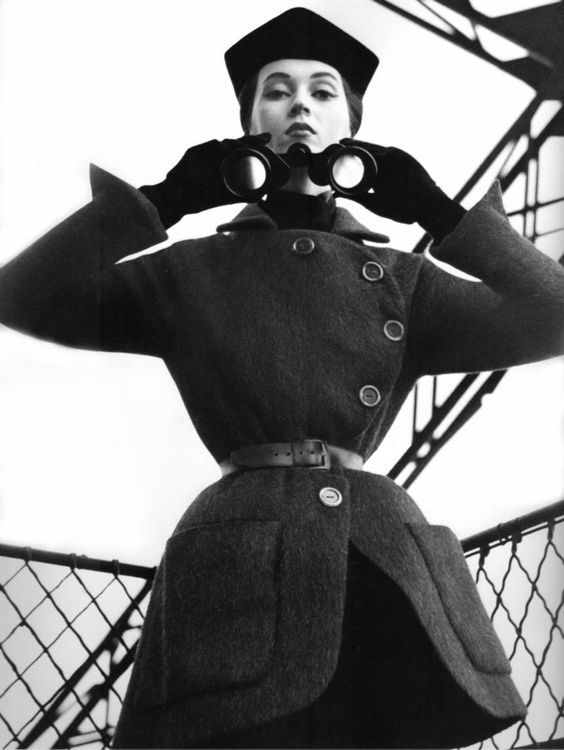 Just as most of Winslet’s wardrobe was custom-made for the film, Boyce has said that they made many of the pieces for the supporting cast: “A lot of stuff was made, even down to the chemist with his hunchback. There was an enormous amount made, all of the big frocks we made. Look, even a lot of the day stuff we made. Even the beautiful day dresses for Marigold…so we can actually get a particular palette. Nearly all of Molly’s stuff (Judy Davis…) was made, so we could actually get that really beautiful decay. The state that she was in when Tilly found her was incredibly sad. So to be able to achieve that, we actually have to make it, and then build up colour and texture and create that sort of very depleted look” (Marion Boyce: Costuming the Cast of The Dressmaker).

At one point Una, a rival dressmaker, sets up shop in the same town, but her designs and execution are shoddy. Boyce said, “Oh the bad Una! I love her. That was her nickname from us. We called her the bad Una (Sacha Horler…). And you now, it was actually quite hard for the cutters to actually make the bad Unas – like, no you can’t finish it, no I don’t want mitered edges – and it actually hurts them to finish things badly! It’s not in their training” (Marion Boyce: Costuming the Cast of The Dressmaker). I love the thought of the costume makers getting twitchy! 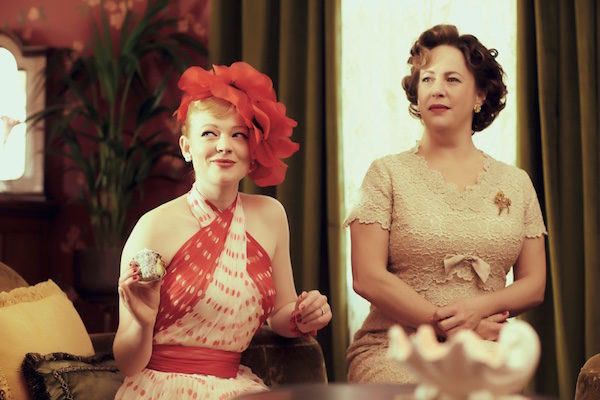 Bad Una (on the right) 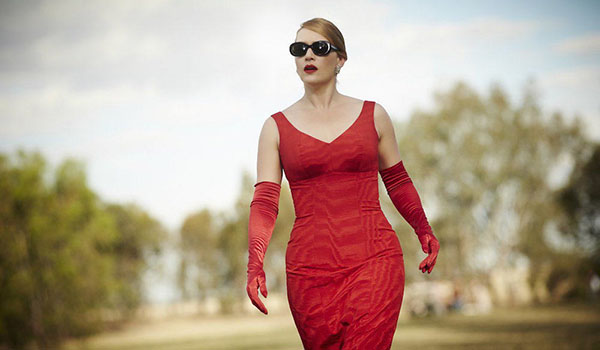 Winslet’s slinky, curve-fitting red moire dress started as a roll of fabric designer Wilson bought 25 years ago in Milan: “I’ve been carrying that roll of fabric around forever… Every time I do a film I think ‘Oh, I might be able to use it here’. And finally, finally, I found a place for it!” (Costuming The Dressmaker) 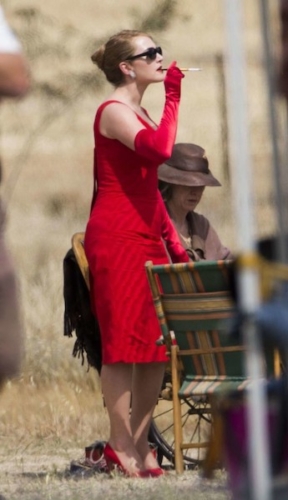 I don’t know if I LOVE the red gloves, but they certainly do bring this dress to BEYOND over-the-top. 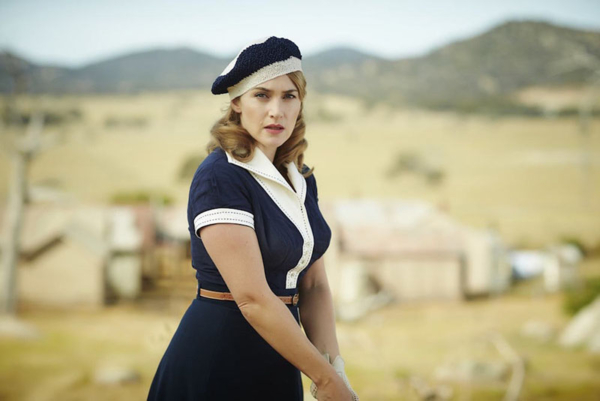 “With Tilly heavily inspired by Dior, Wilson made her own tribute to the French design house in form of Tilly’s golfing outfit. The stiff structured navy dress with white embroidered sleeve cuffs and collar is pinched at the waist with a thin brown leather belt, and includes loopholes at Winslet’s hip for placement of her golf tees. ‘The ladies from the House of Dior, they all wear these white coats,’ Wilson explains, ‘So that was my little tribute to her, or to them, rather'” (The Dressmaker’s Maker). 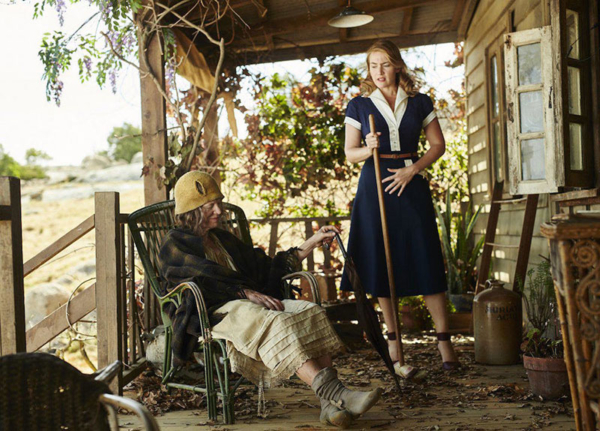 I love anything sporty and any color-with-white (or off-white), so count me in! 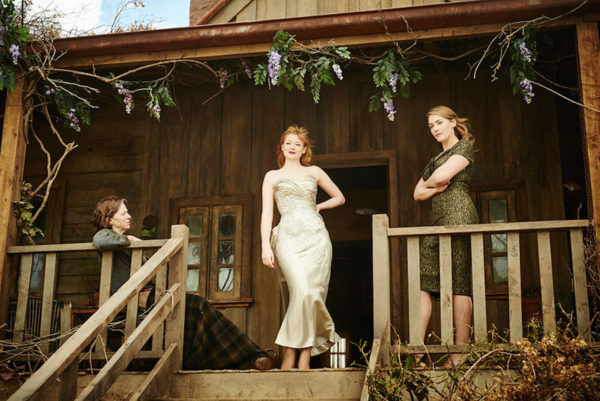 The greenish-black dress on Winslet (right)… 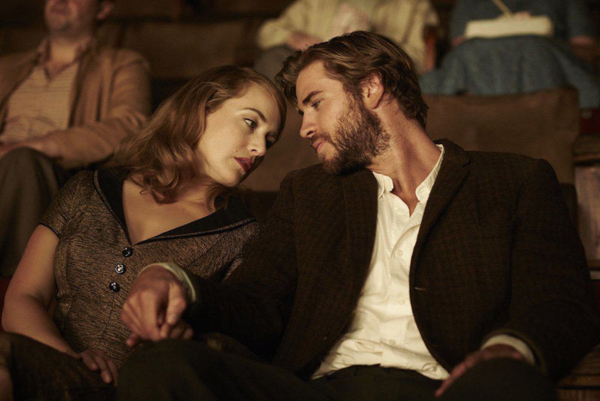 Has speckled fabric that is SO 1950s… 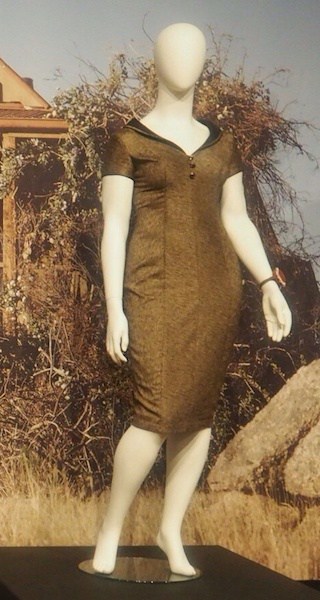 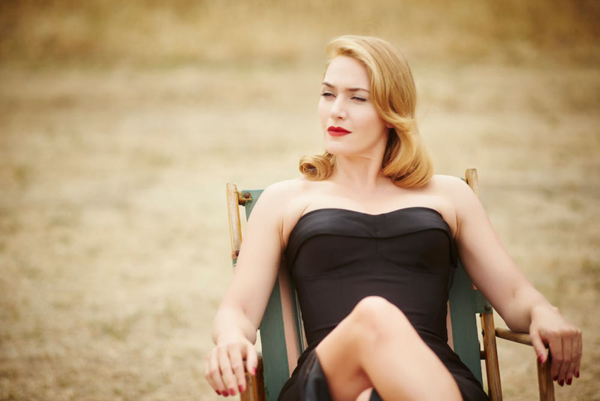 This black dress was uber-structured, says Wilson: “I didn’t want to have Kate hitching [the dress] up. We built Kate a whole lot of underwear that you never saw to reinforce that 50’s shape, that solid look” (The Dressmaker’s Maker). 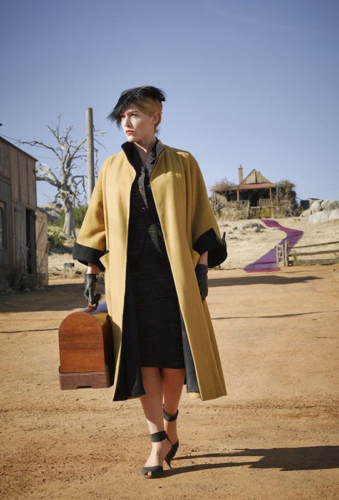 This mustard-and-black swing coat is just fabulous, although I wonder how Winslet isn’t sweating up a storm… and I love the Asian-inspired shape of the hat. 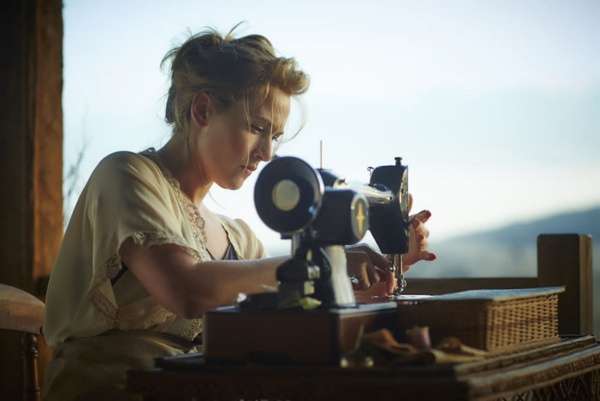 It’s not ALL OTT couture, on the other hand. Winslet does wear some casual clothes for sewing, which, thank god. Because sewing in a girdle would be torture. 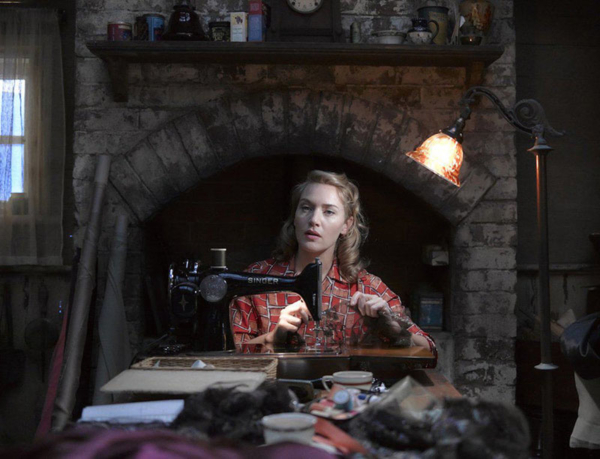 All casual in plaid! 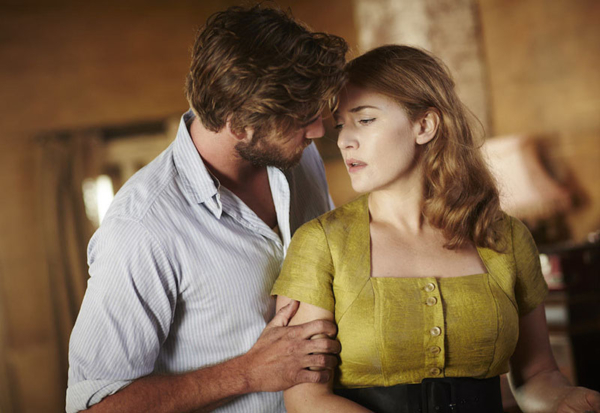 The green dress on Winslet (right) began as a vintage dress. Wilson said, “(It) wasn’t a fantastic design but the fabric was beautiful… Once I unpicked it, we pressed it out and made it flat, washed it, and I redesigned it. And as I was unpicking it, it came across to me that there were many different coloured cottons and layers of darting – which leads me to believe the dress had quite a few different owners. I like that dress because it’s sort of got a history; it had a history before it came to me, and we revitalized it” (Costuming The Dressmaker)

Looking at the townspeople… 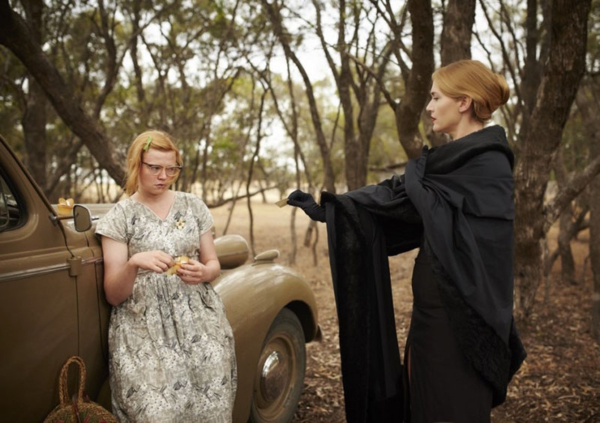 It’s actually hard to find many photos of the pre-transformation townspeople. You need to realize that they ALL look like Gertrude (left) or even shabbier and more 1930s Depression. 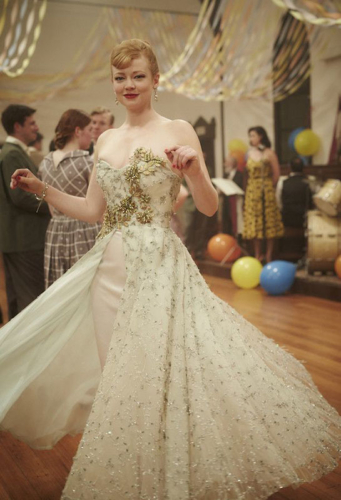 Under Tilly’s expert eyes and hands, however, she begins by transforming Gertrude into the belle of the ball (and also reminds us all of the power of great lipstick). 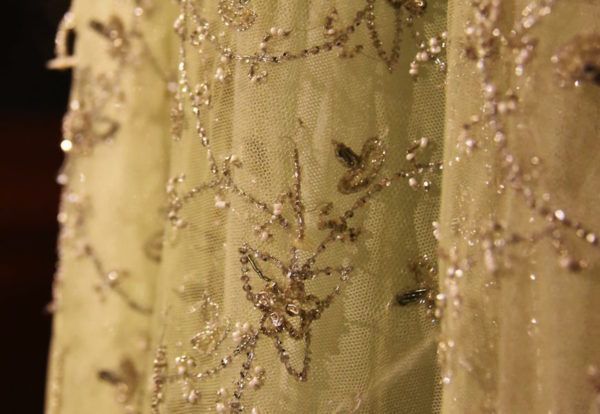 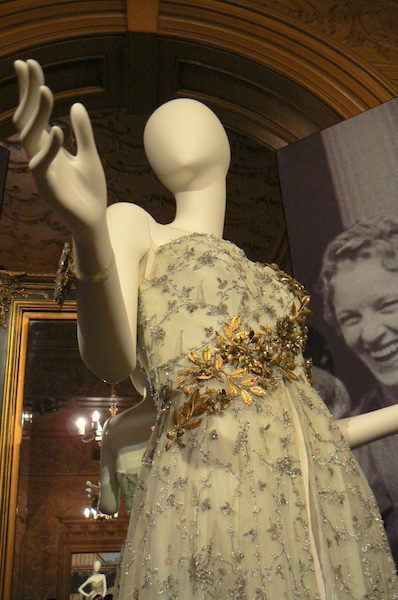 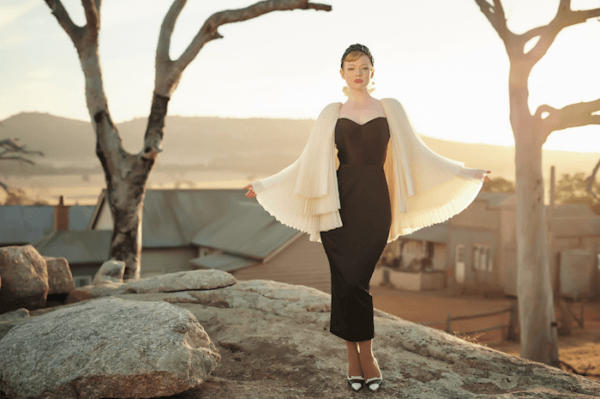 Gertrude gets the best of Tilly’s work. The pleating on this cape is wonderful and definitely conjures the bird motif Boyce discussed above. 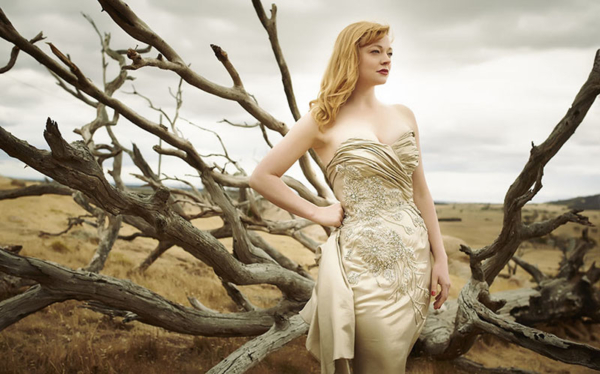 The draping on this pale gold satin number is really gorgeous. 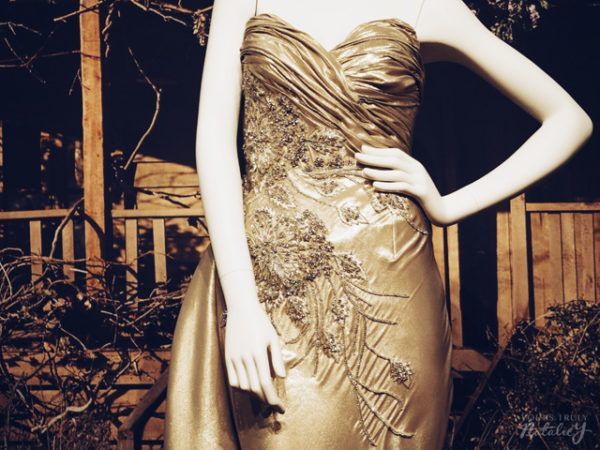 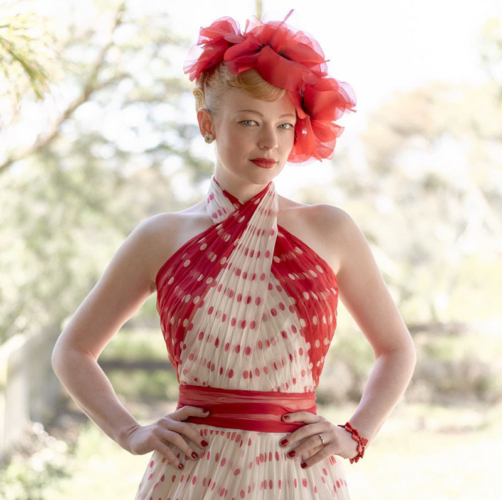 This is probably my favorite costume from the whole film, however. Red and white? Polka dots? Swapped colors? Gorgeous drape? YES YES YES and YES! 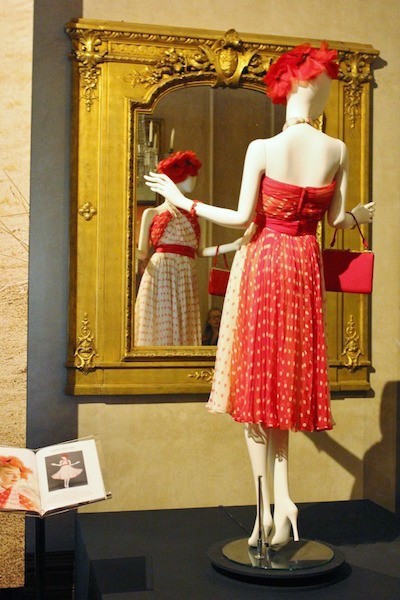 The costumes went on display in Australia, so you can find lots of shots of them on mannequins if you’re so inclined. 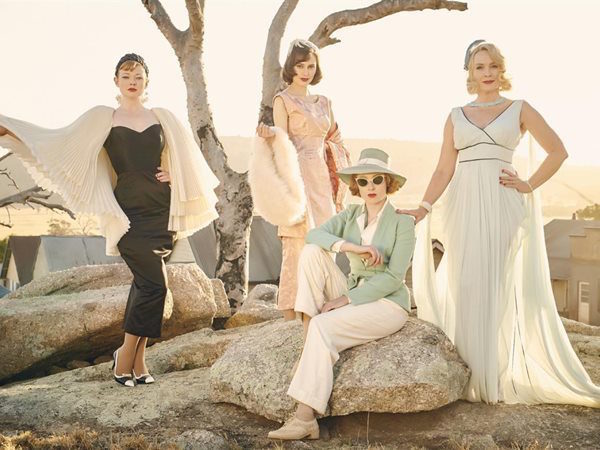 The rest of the townspeople look amazing, too, however. Notice how Tilly doesn’t just do evening glamour but also fabulously chic daywear. 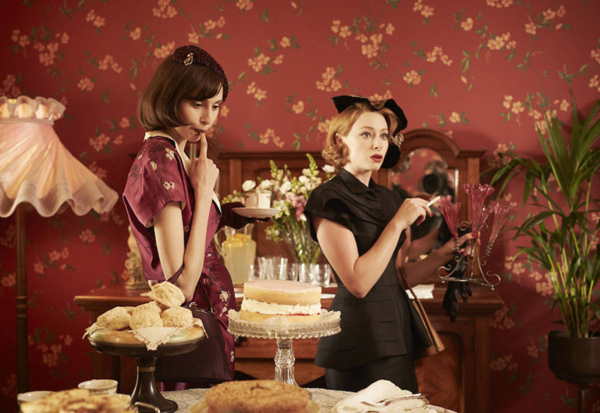 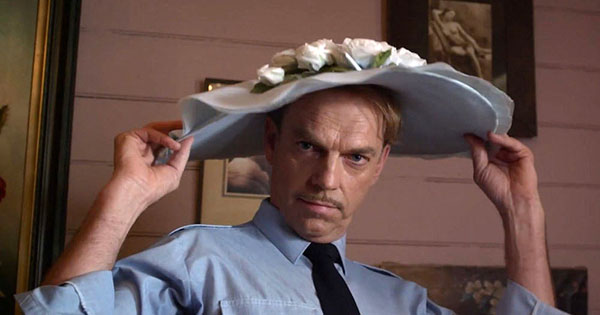 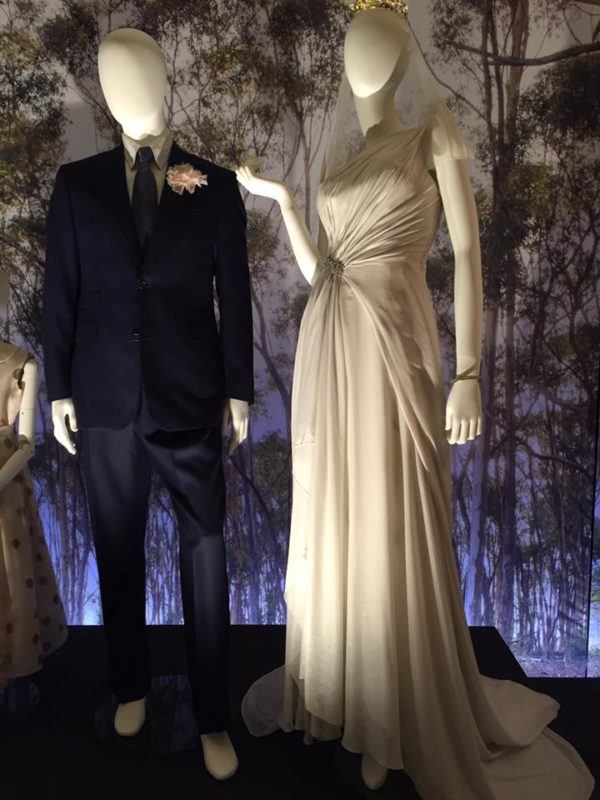 I can’t remember who wore this grey dress… 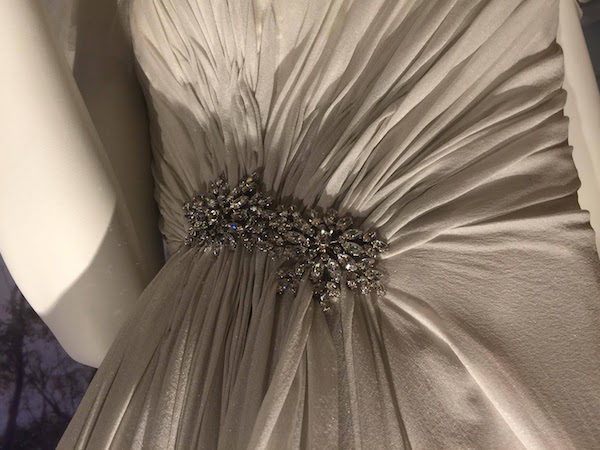 But I thought this close-up was too stunning not to include!

Have you seen The Dressmaker yet? Even better, have you seen any of the costumes on display? What did you think?