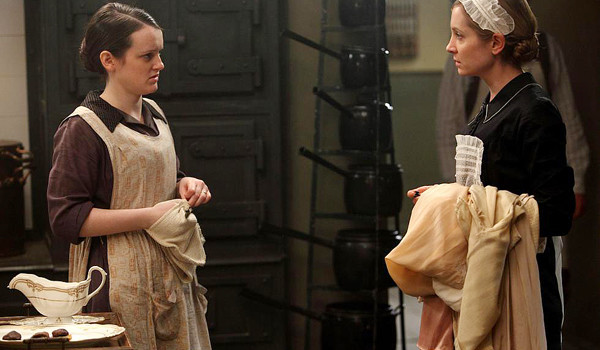 OK, the servants may seem like the least-exciting costumes ever, but we’re going to look some of the key downstairs women who get a bit of attention from the costume designers. 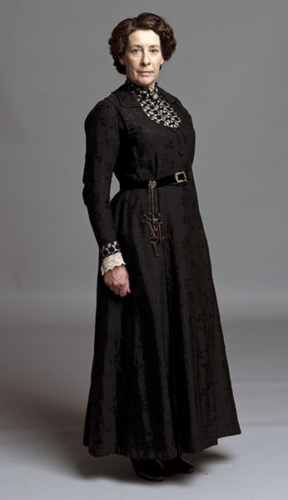 Clothing Style: Takin’ care of business
Dominant Colors: Black, black, and more black — with a tiny bit of secret spice!
Details: As the head of housekeeping, Mrs. Hughes is the #1 woman downstairs (and let’s face it, Mr. Carson only thinks he’s the boss of her). From day one until the final episode, she wears basic black or dark navy gowns as her workaday outfit. These follow the lines of the times and often have little bits of trim, whether lace, embroidery, or pleating, to show that she has status and probably makes a few more pennies than the rest of the staff. Mrs. Hughes doesn’t get that many off-duty storylines, but the few times we see her out of “uniform,” she shows off some touches of color and print. That, along with her sly wit, hint at a wild side hidden under there somewhere. 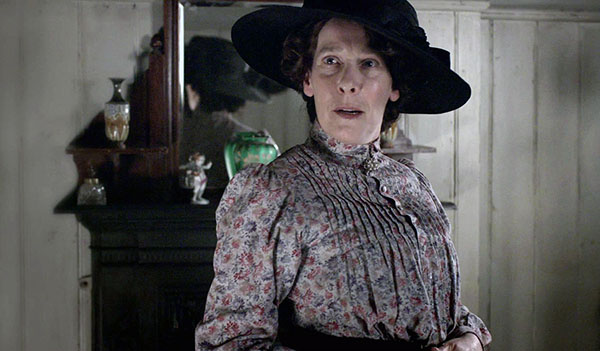 It’s a lot of look, but this is the kind of thing Elsie’s hiding under her dark off-duty duds. 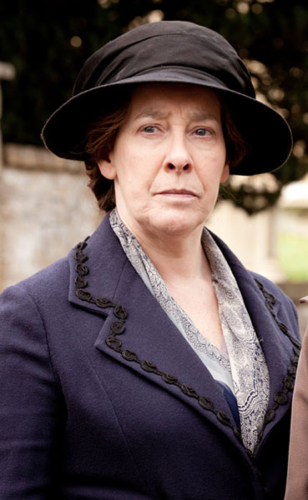 Just a glimpse of patterned blouse peeking through. 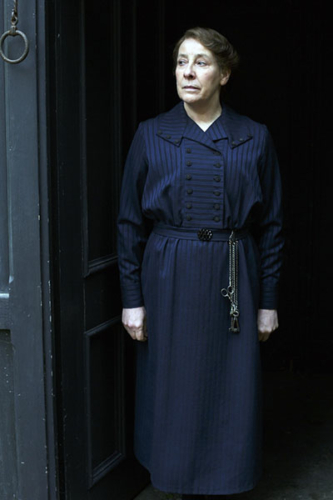 Serious business, always with that chatelaine at her waist.

Mrs. Hughes knows how to relax — she was the first one out into the water during season 4’s seaside afternoon, & she dragged Mr. Carson with her, the old booby. 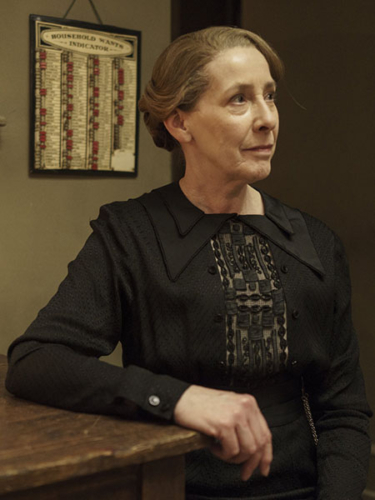 Series 6, and she has yet another black dress, just updated (a little) for 1925. 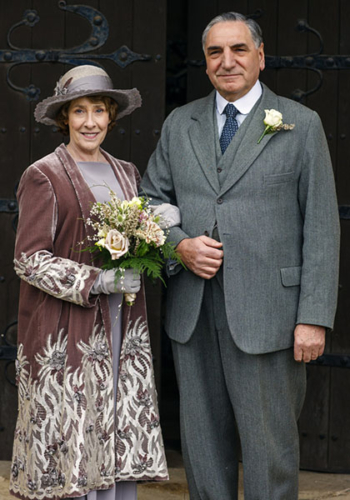 The fanciest thing she’ll ever own! Elsie & Charlie on their wedding day in the final season. 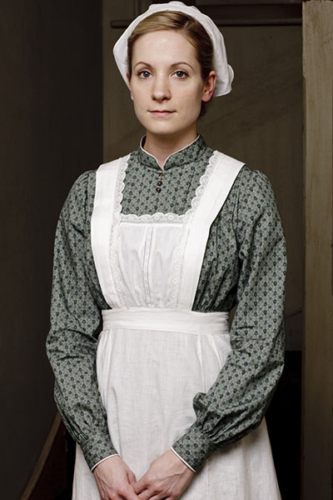 Clothing Style: Unrelenting sadness
Dominant Colors: Grey and black uniforms and even in her off-duty clothes
Details: Oh Anna, nothing ever goes right for you! And your clothes make that abundantly clear. Sure, she spends the first few seasons in strict black or grey chambermaid uniforms, until she gets a full-time upgrade to being Mary’s lady’s maid. Oh yay, then she gets to wear … all black. sad trombone Even in her off-hours, Anna mostly wears greys, blues, and dull colors. Hell, even when she’s wearing a pretty dress, she makes it look sad. 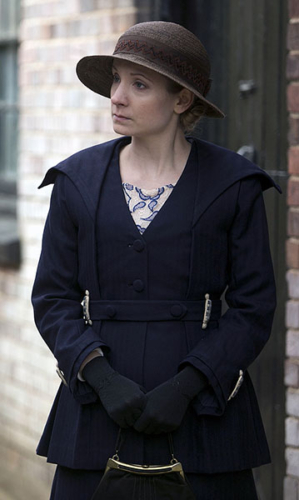 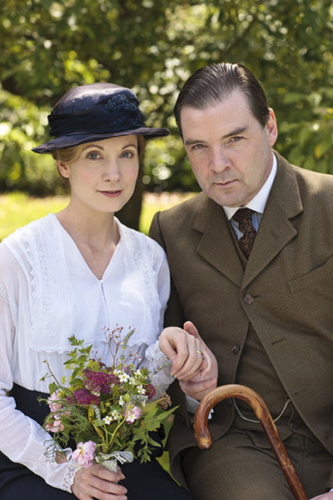 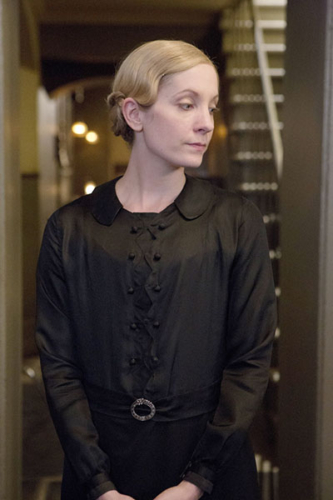 Does she listen to Morrissey while polishing Lady Mary’s shoes? 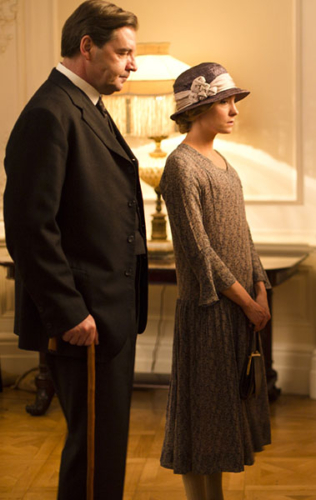 Woo-hoo, date night for the Bates’. 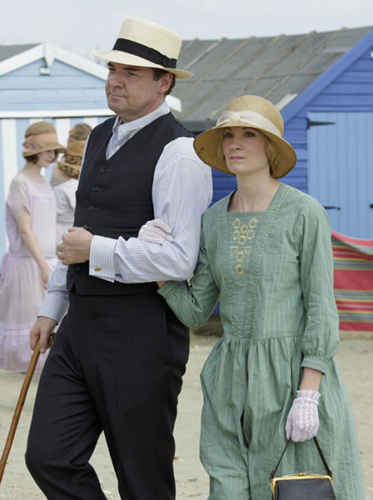 Did Anna go to the seaside to drown herself? Pity, because she looks great in green with that yellow embroidery. 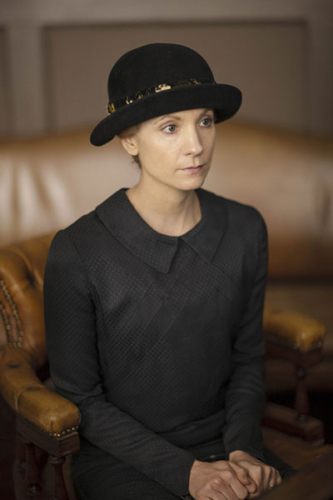 Beautiful detail on her workday dresses in season 5 & 6, but so stern. 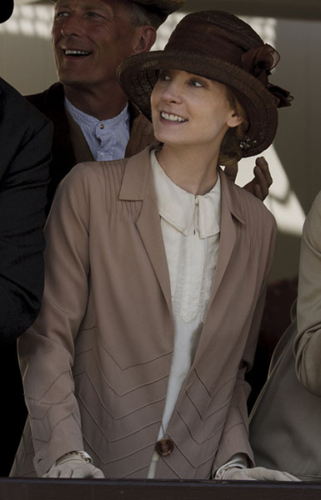 Cheerful at the races in the final season, right before a death. She also wore this outfit when she was in a murder line-up. Hmm… 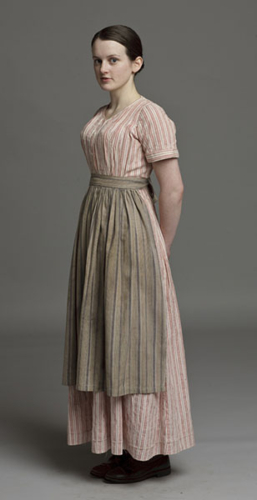 Clothing Style: Mousy then yay, somebody noticed me!
Dominant Colors: Peach, orange, coral, faun, lilac
Details: The scullery maid turned assistant cook grows from total background character to developing her own storyline and lovely period wardrobe to match. The seeds were there from the beginning, at least with her colors and a tendency towards plaid. As a working-class girl, she wears practical clothes, but she’s also quite young so Daisy is drawn to a bit of flair as well with pleating and smart collars.

Muffin caps during the war years. 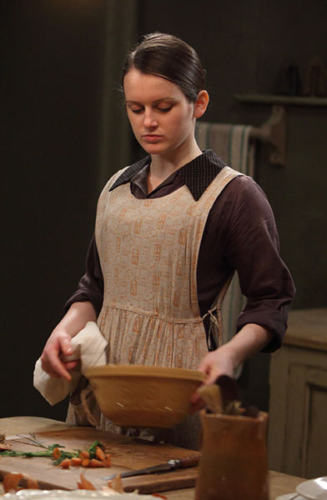 Even with her work uniform, her apron gets a cute orange print. 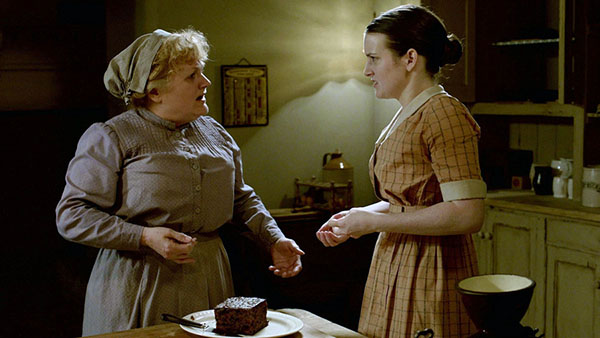 Such a great orange & green windowpane plaid dress in season 2. 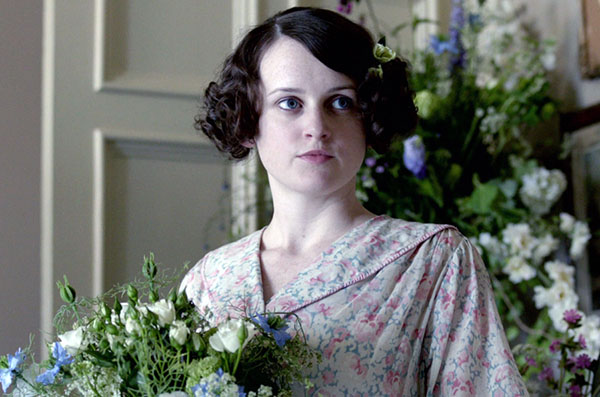 All dolled up for her wedding to William Mason during the war. 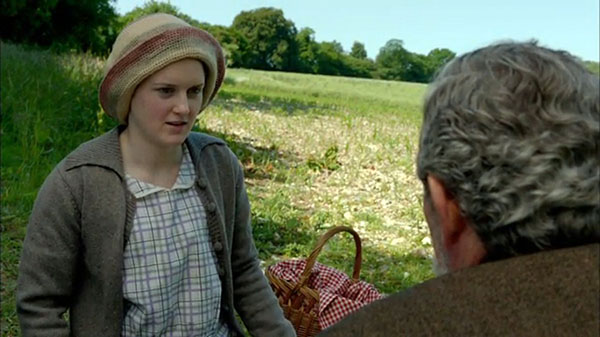 Another soft hat when she visits Mr. Mason’s farm, plus another sweet plaid. 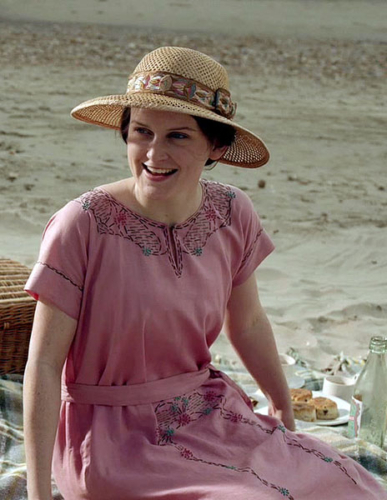 This seaside frock in season 4 is absolutely divine. 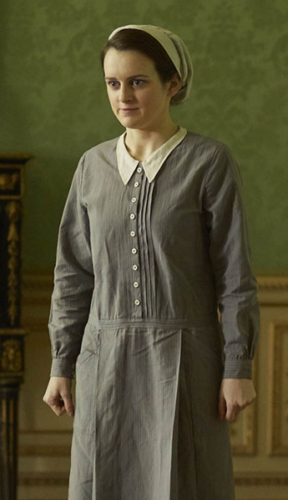 Her season 6 uniform gets more formal. 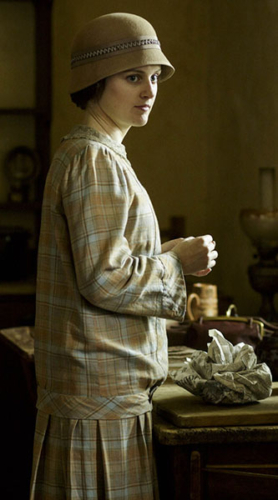 And she greets the final season with some smart plaids.

Their costumes aren’t flashy, but have you noticed the servants’ style on Downton Abbey?