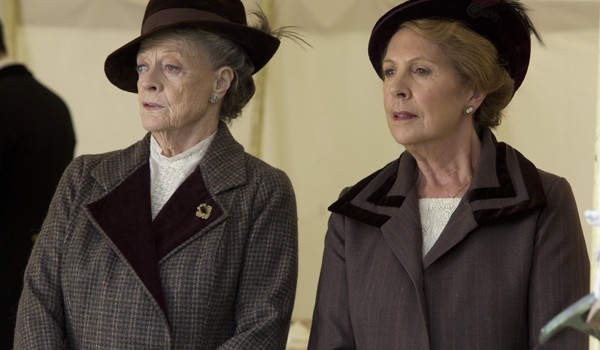 Here, we’re looking at all the women older than Lady Mary — sure, they aren’t exactly of the same generation, but they give an interesting comparison for what mature women would wear over this time span. The costume designers definitely had their hands full with this lot!

Clothing Style: Classic, tasteful, and modern — but not too modern!
Dominant Colors: White or ivory (often with black or brown accents), mauve, silvery grey, with occasional dips into cranberry, blue, and brown.
Details: Cora is young enough to not be stuffy, but she’s a Countess and she’s gotta dress like one, which can be best seen in the AMAZE-BALLS hats that are her trademark. Many of her outfits also feature rich trims with lots of bling-y elegance for evening, but she aims for elegant casual on a day at home. In the early seasons she loves tailored suits, but being the emotional core of the family, there’s always a softness and drape to her clothing. She’s always glamorous and while she’s not too far behind behind her daughters’ styles, she’ll always lean more towards classic than fashion-forward.

Around the house, she prefers to be a bit more casual yet still is the epitome of elegance.

She will occasionally wear strong colors, usually in the dark red/wine family.

She loves layering and detail, like this intricate embroidery on rich velvet.

Mauve is her go-to color when she needs to be extra tasteful.

Her evening looks are very regal, but she’s not afraid to show skin.

Clothing Style: “I’m 10 years behind the times, and I don’t give a fig about it!”
Dominant Colors: Black, dark purple, grey, slowly lightening up later in the series
Details: The Dowager Countess is here to drop snarky wit on your ass, and she’ll do it old-school style. That means she’s wearing 1900s clothes when the show opens in the 1910s and very, very slowly updates every so slightly to 1910s clothes by the time the series ends in 1925. Also, Maggie Smith said she didn’t wear a corset on Downton Abbey, despite 1900s-1910s clothing rather requiring one. No excuses, no regrets.

Edwardian bling, series one. Get used to this look, folks.

We’ll forgive her old-fashioned style because it means great hats.

She may be in her 80s, but y’know, a corset isn’t just for posture. Just a thought.

The closest to “updated” you’ll see is this geometric, faintly Deco trim on her coat in season 6.

Lighter colors in the final season, but nothing to indicate that the Dowager is actually living in 1925.

Clothing Style: Practical in the extreme
Dominant Colors: Whatever doesn’t show blood (from the hospital)
Details: Once a middle-class doctor’s wife, always a middle-class doctor’s wife, despite her relationship with Lord Merton in the final seasons. Isobel is trim, tailored, almost frumpy, but only because fashion is the farthest thing away from her mind. She’s trying to get a job done here — whether it’s running a hospital or trying to win an argument with the Dowager Countess, Isobel is all business and it shows.

Basic blouses and skirts emphasize her background as woman who worked (as a nurse) and can take care of herself.

Updated for 1922, but always tailored and no-nonsense.

Much like the Dowager Countess, Isobel’s wardrobe lightens up in the later seasons.

Clothing Style: Striking, modern, city girl
Dominant Colors: Black, green, exotic prints, great hats
Details: Meddlesome Aunt Rosamund is widowed and faaaaabulous. She may give terrible advice to first Mary and then Edith, but she always has killer style, so we forgive her. She’s definitely the city mouse compared to her country mice cousins, either visiting from London or featured whenever one of the Crawleys comes to town. Rosamund has at least one lover who we see during the series, and although she learns that the fellow is also sleeping with her maid, we figure Rosamund can attract others because she’s always dressed in the latest fashions.

Va-va-va-voom, Rosamund is dressed to kill in season 2.

Her daytime look keeps it classy but note the oh-so-fashionable ‘oriental’ scarf.

She’s a red-head, so she’s contractually obligated to wear green, as shown in series 3.

Her ensemble for Mary’s wedding in the final season wasn’t her best, but she definitely stood out.

Clothing Style: “I’m your crazy American grandmother! We’re SO nouveau riche!”
Dominant Colors: Black, gold
Details: As played by Shirley MacLaine, Cora’s mother is a brash contrast to the Dowager Countess. Martha is fashionably up to date in her cocoon coats, cloches, towering feathers, and sparkly bandeaus, but she also has that trying-too-hard look of the newly wealthy. She wears ALL the bling, ALL the time, just in case you missed the fact that she has money (and that the Abbey is kept afloat thanks to Cora’s fortune, thankyouverymuch). There is nothing subtle about Mrs. Levinson.

Making an entrance in season 3.

Older than the Crawley girls, yet the first to wear a blingy headband with feathers for evening.

Still making an impact during her shorter visit in series 4.

Who’s your favorite lady of certain age from Downton Abbey? Which one has the best style?