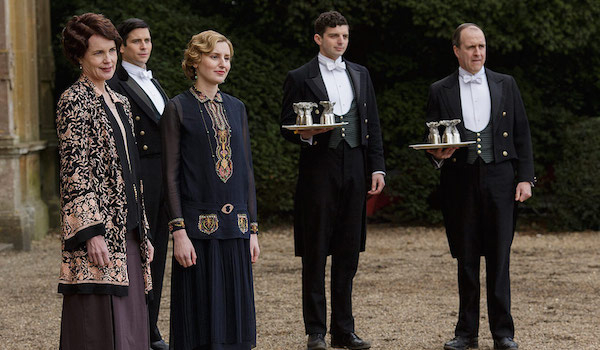 We here at Frock Flicks (okay, Kendra and Trystan) are so excited for the final season of Downton Abbey that we’re doing weekly costume recaps AND podcasts! Tune in each week for an episode-by-episode recap of our thoughts on both the plot and (especially) the costumes — because really, while we all are invested in the lives of the fictional Crawley family, don’t we actually keep coming back to see what they’re wearing? You can find the podcast at the bottom of this post, or on iTunes!

At the start of episode one, it’s time for an oh-so-typical hunting scene. Mary’s looking chic in her navy and khaki riding habit: 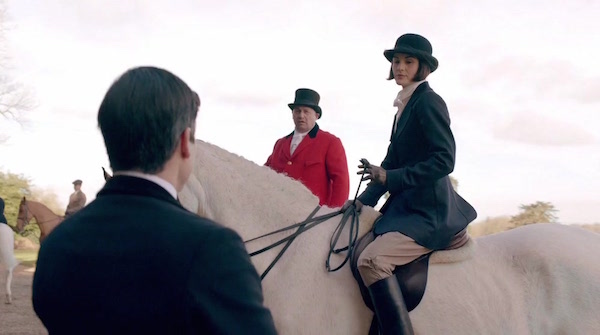 We find it interesting that both Cora and Edith are dressed in the same navy and khaki, despite not joining the hunt. Both are in STUNNINGLY GORGEOUS ensembles. Edith’s in a sheer navy dress with Middle Eastern-influenced embroidery on the collar and down the center front of the dress, plus embroidered pockets and a belt buckle in the same khaki. Cora is in a sheer pinkish khaki blouse, navy skirt, and then a kimono overblouse with pinkish khaki embroidery on a navy background. 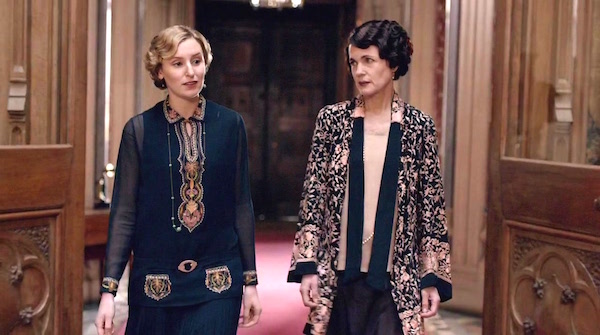 Although the emphasis is generally on the face in terms of framing shots, check out Edith’s coordinating navy shoes: 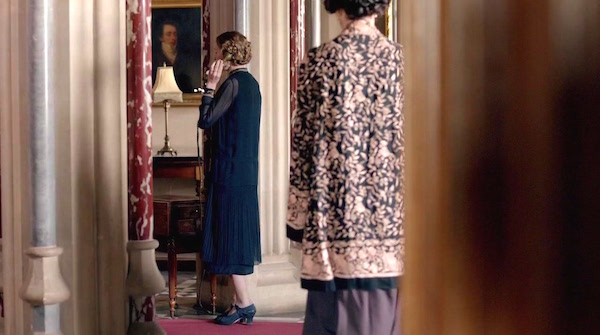 We always admire Cora’s hair. Her marcel waved and finger curled updo is accentuated by a coordinating khaki and brown comb. 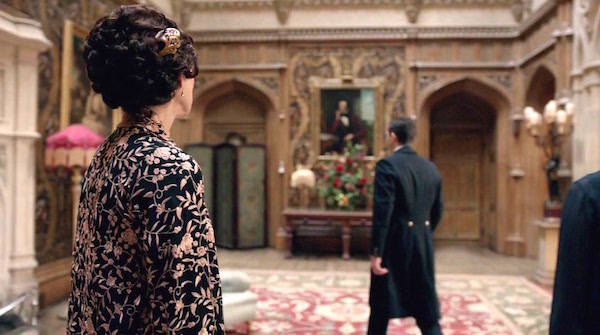 One thing we’ve always appreciated over all the seasons has been the attention to detail in the servants’ wardrobes. Okay, so Mrs. Patmore probably hasn’t worn anything to get excited about, but the female servants who aren’t in uniforms always have subtle details that bring a little bit of flair to their look.

A great example of this is Mrs. Hughes. For the past few seasons, she’s been in different black dresses with insets in the bodice, a very typical late ‘teens/early 20s design element. This season, she’s in a tunic top with inset; she also has a darker black trim — two rows — plus a belt with large buttons, and a larger square bit under the belt at the center front. There’s a nice attention to detail here. The costume designer could easily have just put the servants into Black Dresses(TM) and called it good. 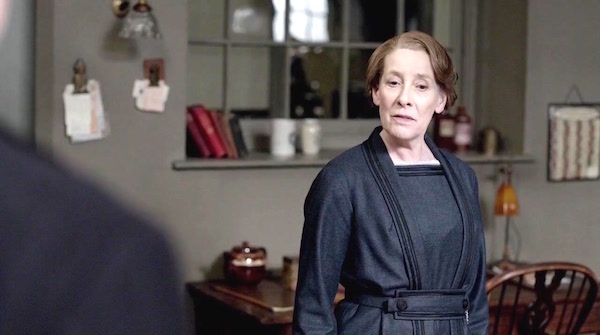 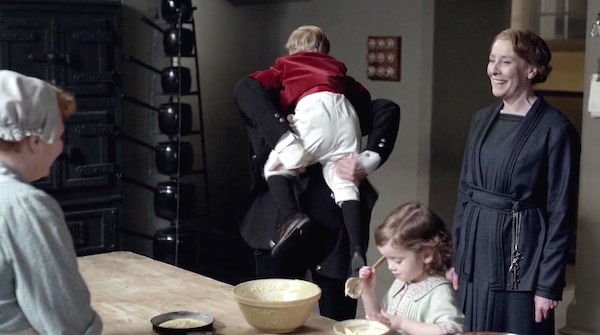 Meanwhile, Anna has one outfit with what looks like a collared overbodice or overblouse in silk charmeuse: 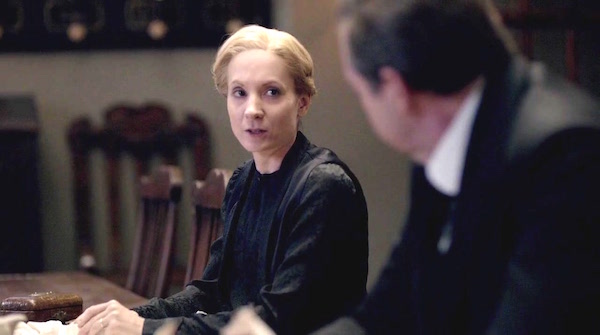 And then this black dress that we REALLY admired, with the nice detail of criss-cross seaming or pintucks across the upper bodice. 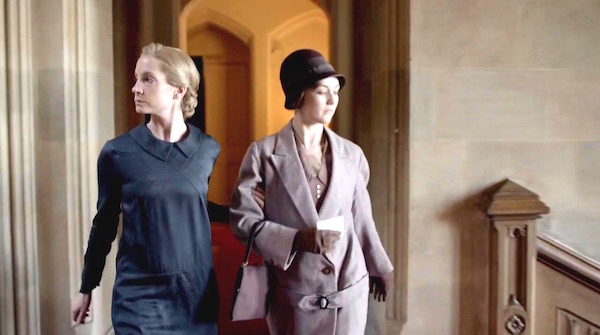 Finally, we want to steal Baxter’s dress. It’s in a narrow stripe that’s placed vertically on the bodice and sleeves, but horizontally across the center front — suggesting an inset. PLUS the collar has buttons. TOO CUTE! 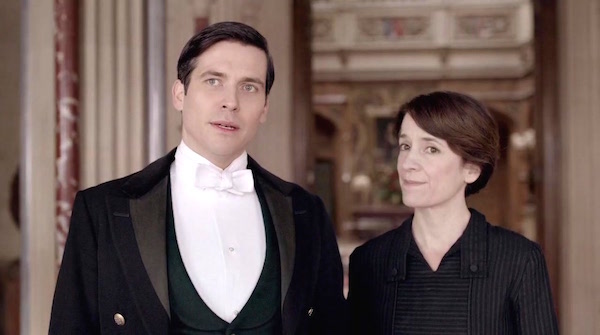 There’s a family dinner, with only the grandmothers attending. So what, everyone still has to dress up to the ELEVENS (nines doesn’t cut it)! 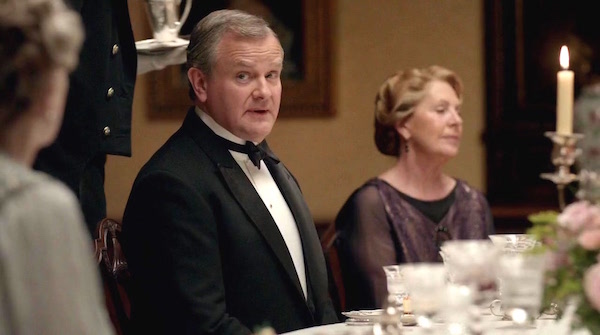 The Earl always looks sharp, and Isobel is in a sheer black dress with a muted purple overlay — looks like it has some beading on it. 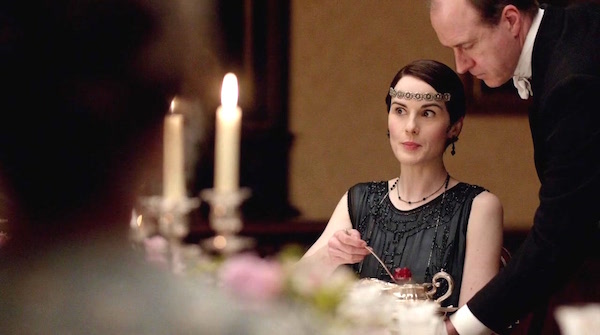 Mary loves to rock the black for evening. Her sheer dress has geometric beading — VERY art deco. We think this is the first time we’ve seen over-the-forehead bandeaux, at least on both sisters at dinner. 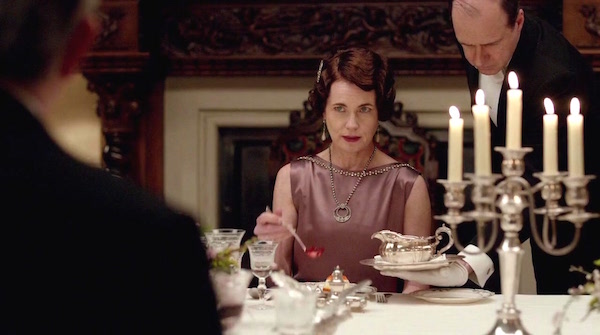 Cora in a color very similar to Isobel, but she’s much more fashion-forward in being sleeveless. That silk charmeuse is lovely. The necklace is rather art deco and modern too. 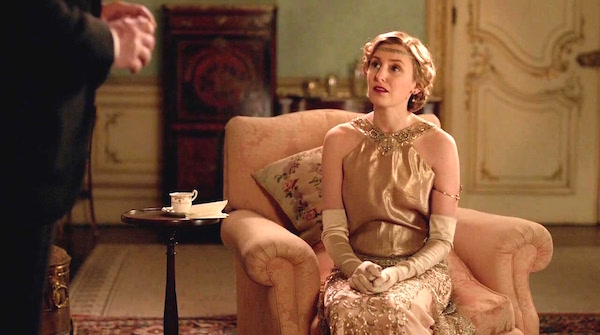 Edith rocks it in a gold silk number with a halter neckline (showing shoulders/back in eveningwear has become her trademark after being jilted at the altar). She too is wearing an over-the-forehead bandeau.

We just needed to include a shot of the Dowager Countess’s perfect Marcel wave: 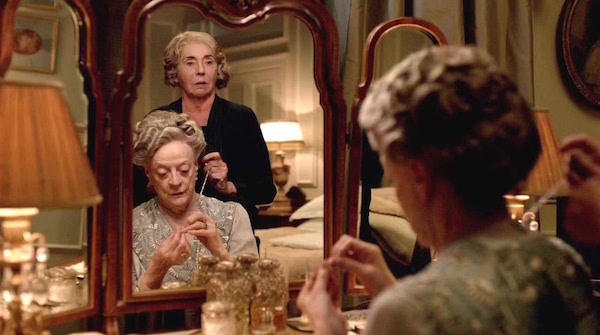 The next day, that khaki color has warmed up slightly with a bit of pink, as everyone is in relaxed daywear: 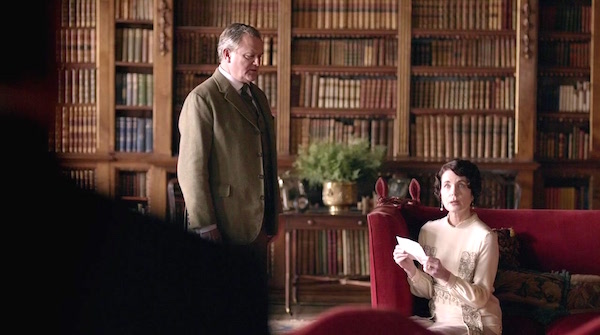 The Earl is all earthy brown, while Cora has a pale warm pink blouse (or dress) with embroidery in geometric layout. The 1920s were ALL about geometry, so this is just perfect. 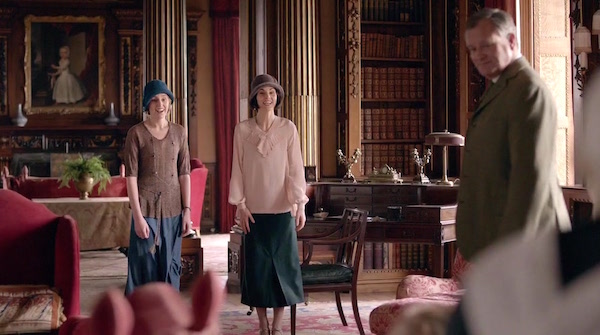 The two sisters are (shockingly) getting along, so they’re dressed to tie in with each other and Cora. Mary’s blouse is the same color as her mother’s, although with a neck tie. She pairs it with a black skirt with center front kick-pleat, and a brown cloche. This is VERY relaxed for Mary! Edith wears an unusually fitted brown top, perhaps knitted or crocheted? She pairs it with a fuller navy skirt and a navy cloche.

Then, it’s off to London for Edith. We’re not sure why Edith doesn’t just embrace a London life, especially when she has the always-fabulous Rosamund as an example. 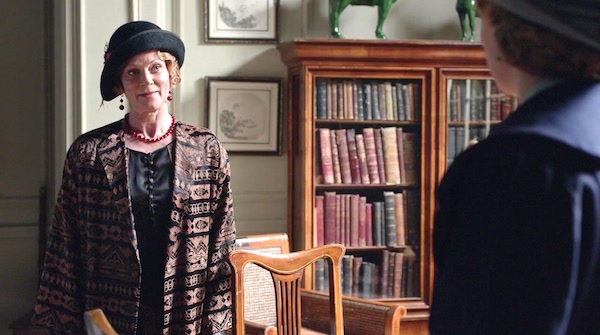 Aunt Rosamond rocks it in a black silk satin dress that clearly pairs with the fabulous warm khaki patterned coat (you can just see a bit of the same print peeking out near the neckline of the dress, and the buttons are also in that khaki color). In our podcast, we thought maybe the pattern was Egyptian, but now that we can peer at it, it looks Moroccan. This era was all about incorporating non-Western motifs into clothing, so it’s a perfect trend for DA to adopt.

However, we question Edith’s (normally impeccable) taste level (hat tip to Nina of Project Runway) here with that sweater: 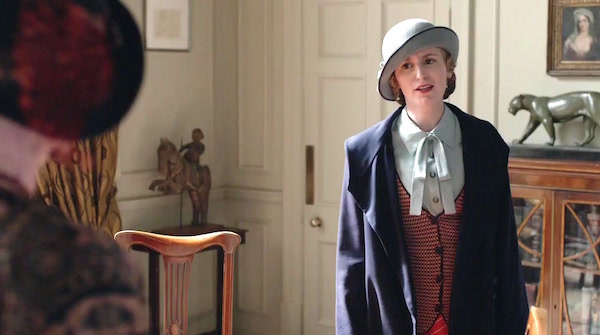 Okay, so she might look like Madeleine (from the children’s books) without the orange and black striped sweater, but — huh? It doesn’t NOT go, but it doesn’t GO either.

Back at the Abbey, Mary is being blackmailed, but she’s standing her ground in this GORGEOUS cranberry silk charmeuse dress with matching silk crepe border at the neck, and then an inset and tiny edging in pumpkin-colored silk crepe. 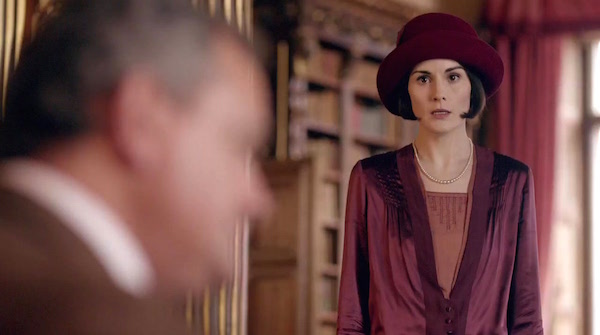 Notice the shirring above the bust, and the vertical embroidery on the inset! 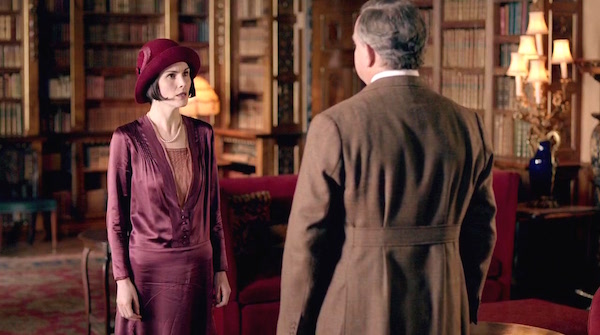 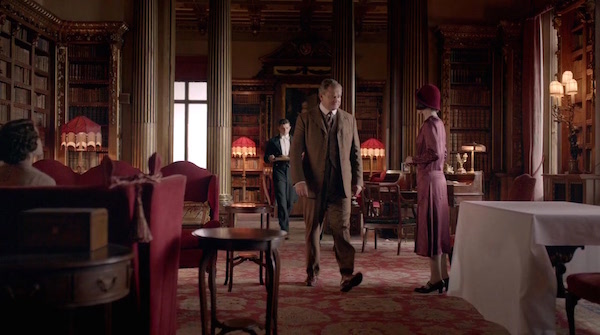 Meanwhile, Cora is sticking with the khaki color, although warming it up even further — it practically matches her skin tone. The pattern across the front appears to be a woven design? 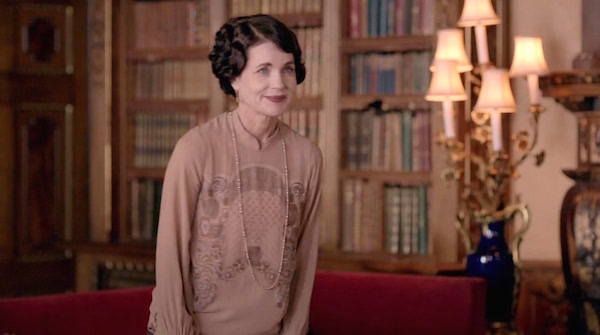 It’s off to the neighboring castle to see Lord High-Muckety-Muck empty out his goods. Earl Grantham says they’re going for “support,” but it seems a bit ghoulish really. Mary and Edith have nothing to do there, and I’m pretty sure we’ve seen these hats and coats last season (not that this is a bad thing; it’s more realistic!). 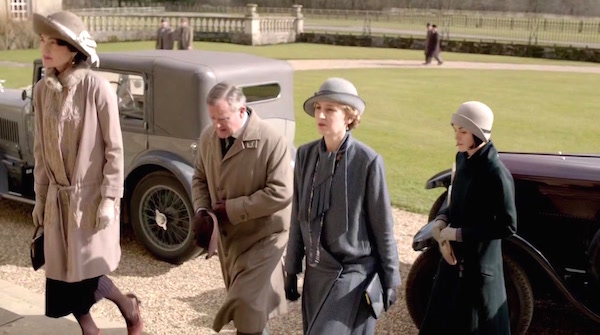 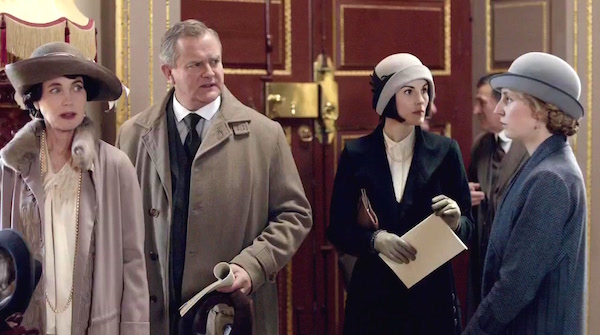 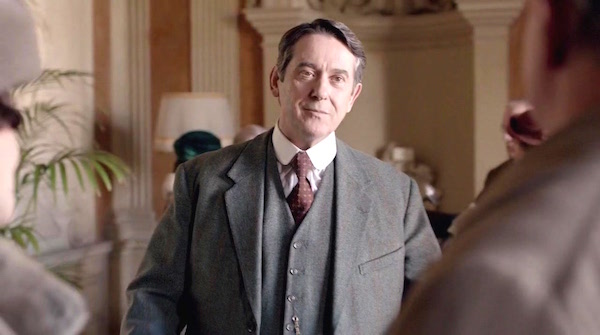 “Hello, care to buy all my worldly possessions?” This, my friends, is Mr. Wickham from Pride and Prejudice (1995). 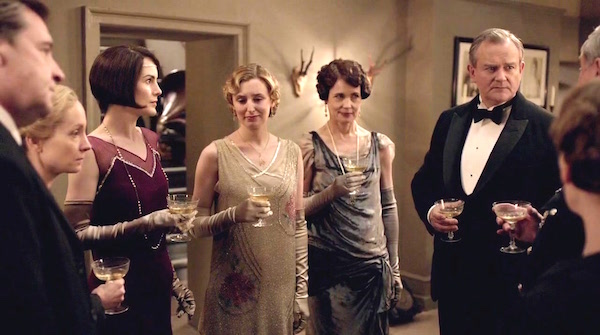 Mary always looks good in jewel tones like this wine shade, but the gold with randomly placed paisleys isn’t doing Edith any favors. 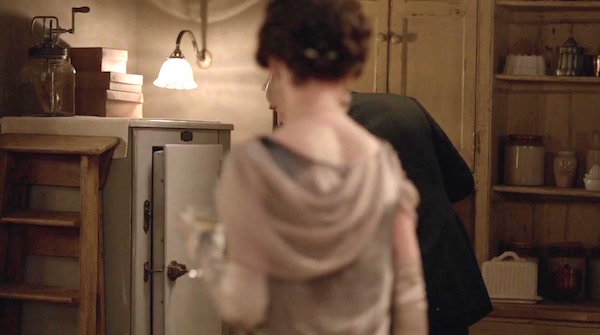 The drape on the back of Cora’s dress just looks wonky.

“Does it ever get cold on the moral high ground?”

What do you think of Downton Abbey‘s final season opener?

Listen to our podcast recap of the episode and its costumes here or on iTunes!