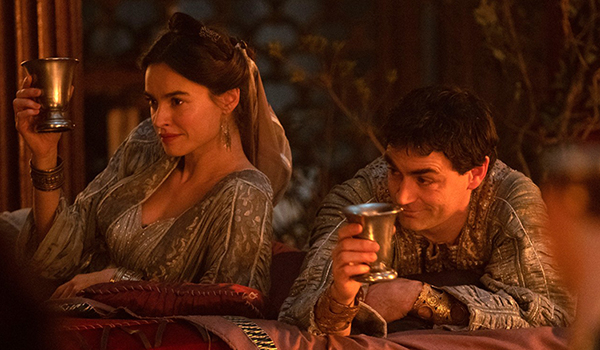 Sky Atlantic’s new series Domina (2021) tells the story of legendary Roman empress Livia Drusilla and Rome’s power politics. She’s a figure who’s been on screen before, most notably played by Siân Philipps in I, Claudius. But that (and most) portrayal shows Livia as an older woman, while this one starts when Livia is only 15.

Now, the last time I tried to review an ancient period film, admitting my lack of knowledge about ancient dress and basically not analyzing the historical accuracy of the costumes, some people got VERY cranky. So I’ve asked a friend who knows the period to review Domina‘s costumes specifically, and we’ll publish that review sometime in the next month. Given that they were designed by Gabriella Pescucci, they’re very pretty! So, hold on to any twisted knickers, because here we’re just going to talk plot/character/casting!

Overall, I give the series a solid B grade for being entertaining, minus some really weird casting decisions. Usually, “weird casting decisions” means “actors who don’t suit the role.” That’s not the problem here. The problem is that they do three or four episodes with one set of actors playing the “young” version of the characters, then midway through this season, swap everyone out for the significantly “older” version by using a totally new cast. The problem is that then I spent the entire second half of the series going “Really? That’s supposed to look like an older version of X??” and/or “WHO THE FUCK IS THAT SUPPOSED TO BE??!!” It doesn’t help that all the men’s names end with “us” and the women’s with “a,” so telling your Drusus from your Thesus from your Iullus isn’t as easy as you might think. Young Livia. I’ll save you the mental struggle I went through and tell you that’s Nadia Parkes, who played Rosa on season 1 of The Spanish Princess. She’s replaced midway through by Kasia Smutniak, who has a totally different accent. And a totally different nose. The weirdest glow up is Gaius (future Emperor Octavian), who’s in front, with Agrippa behind. The young version (Tom Glynn-Carney) is a literal Gollum! How am I supposed to get excited about him??!! He then grows up to be Matthew McNulty, and I’m struggling to see any resemblance. Granted, I’d be very relieved if I married a Gollum and he turned out to look like this. Even worse, in the “older” episodes, there are a bunch of teenage children living with Livia’s family, some of whom are children of the key characters while others, I have no idea what their connection is supposed to be. So when Julia is sad because she has to marry Marcellus, but is in love with some other guy-us, I had a hard time caring since I couldn’t keep ANYONE straight. Julia (Liah O’Prey) doesn’t want to marry Marcellus, which makes sense as he seems like a sociopath, but she’s in love with someone else whose name I literally can’t remember. I did like that they included a person of color in a key (fictionalized) role — Livia’s slave/companion Antigone. The ancient Roman empire was massive and very diverse, so the whitewashed version that’s often seen on screen is a very inaccurate portrayal (doesn’t help that you’ve generally got British actors playing Mediterranean characters). I was also confused by what seemed like some wasted characters, like Octavia the Younger, sister of Gaius and one-time wife of Mark Antony. Her whole focus seems to be who should marry her brother and son, and while that was a big part of Roman power politics, she comes off as somewhat shallow as a result. She grows up to be Claire Forlani (Basil, Camelot). Young Scribonia (Bailey Spalding), Gaius’s first wife, is very Ancient Roman Barbie — when she is supposed to be 10 years older than Gaius. Older Scribonia (Christine Bottomley) is more convincing, plus she’s all about sacrificing piglets to get her revenge, which given that it’s fictional and I don’t have to be sad about real piglets, #TeamSacrificingPigletsForRevenge.

A major shout-out is due to Isabella Rossellini as Balbina, a madam who gets the most Bitchy Roman line in the series (“You don’t know who you’re fucking with!”) and looks FABULOUS in purples and practically-Medusa hair: I feel like this is Trystan’s next Bitchy Roman costume! SO GOOD! I didn’t recognize her at first!

According to this review by Daisy Dunn, classicist, author, and cultural critic, the series certainly embellishes and even plays “fast and loose with history,” but the first season seems like a promising set up for future seasons:

Domina is by no means a documentary account of the empress. The first three episodes feature some curious inventions and passages of storytelling … But for the most part it captures well the spirit of the age, its values, and with some authenticity (observe Livia’s saffron-coloured wedding apparel) the fashions and architecture, too. Especially accurate is the fear of dictatorship and monarchy that rumbles beneath the story … As the series progresses … we are likely to see more of the Livia we are familiar with. She will necessarily be shown immersed in matters of state … What new interpretations such as Domina have the power to do is to reframe Livia’s involvement in public affairs as evidence of her intelligence and keen political engagement rather than evil meddling. There are good signs that the series will be doing just that” (The truth behind Ancient Rome’s most controversial woman).

If you’d like to know more about the real Livia, I can recommend these episodes of The Other Half podcast.

The only costume thing I am even vaguely qualified to comment on is the hair, which is beautiful (except Livia’s tendency to wear her hair almost unstyled): But it looks nothing like the “nodus” hairstyle, which both Livia and Octavia are depicted wearing in basically ever contemporary portrayal: Okay, so the bangs really wouldn’t translate well today… Rome, Ara Pacis museum: cast of a portrait of Livia Drusilla, wife to Augustus. From the collection of casts of busts showing the members of the Julio-Claudian dynasty. The original artwork is exhibited in the Ny Carlsberg Glyptotek (Copenhagen). Picture by Giovanni Dall’Orto.

So, if you’re up for trying to keep all the characters straight, Domina might get you through yet another week of the pandemic. Hold tight, we’ll review the costumes soon!