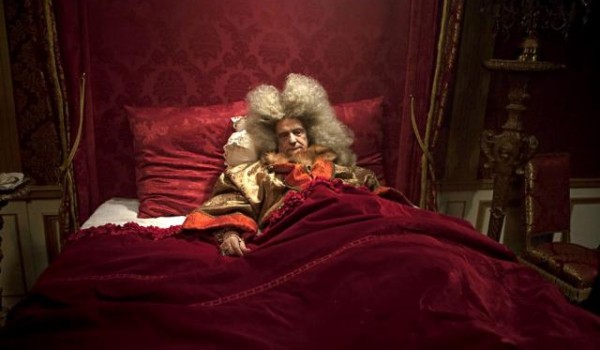 The Death of Louis XIV (2016) has been on my watch-list for a while now, and I recently scored a DVD of it. I’ve heard nothing but praise for this film, and I knew going in that it probably would be less of a period piece and more of a conceptual exploration of the decline and death of a powerful man. Which, honestly, also sounded kind of interesting. So, while I wasn’t expecting a lot of costume content, I at least was hoping that it would be worthwhile to watch from a psychological standpoint.

I made it 30 minutes. I hate to say it, but this is essentially a movie about an elderly man chewing food while wearing increasingly ridiculous wigs. If that’s your bag, then rock on! If not, well, you’re not going to miss a lot if you skip it.

I will say that it did remind me a lot of my grandfather’s death some 20-odd years ago. The way everyone was huddled in the wings, watching him slowly decline, waiting for a sign that he was either going to rally or that it was actually over. Not to diminish his passing in any way, but it also reminded me that dying can be a boring slog for everyone involved. And The Death of Louis XIV was incredibly accurate in that respect.

Louis sporting one of the less-weird wigs.

The opening scene. Lasts a good ten minutes. Is more or less nothing but Louis laying in bed while doctors and courtiers murmur and fuss around him. The wigs get weirder as Louis gets weaker.

Louis and his grandson and heir have a chat.

Maintenon actually cracking a smile? Hard to say. She spends most of the film lurking on the fringes looking grim.

Have you made it through The Death of Louis XIV?