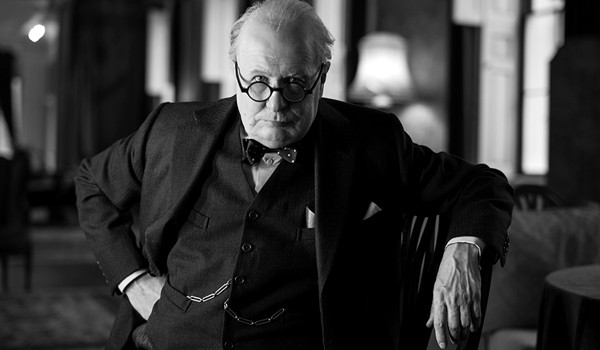 Gary Oldman is entirely subsumed into his role as Winston Churchill in Darkest Hour (2017), which is available on Blu-ray and DVD today. I wasn’t planning to review this film, or at least not anytime soon, because I figured it wouldn’t have much in the way of costume content, despite Oscar-winning designer Jacqueline Durran at the helm. It’s set during World War II, and while plenty of excellent flicks take place during that period, the frocks often disappoint.

However, a PR firm for Universal Studios offered us a copy of Darkest Hour to review, and since that hardly ever happens to us, so you bet I’m gonna give it a timely write-up! Readers often ask us to review things that are currently playing, but because we are running this blog as a hobby (albeit, publishing five times a week), we simply don’t have the time to go see every film or watch show at the same time it comes out. So if anyone out there in movie / TV production and promotion land wants to lend a hand and send screeners for review, that would really help us with scheduling!!! 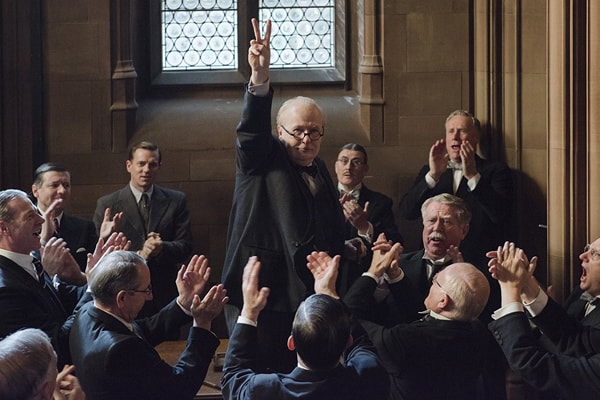 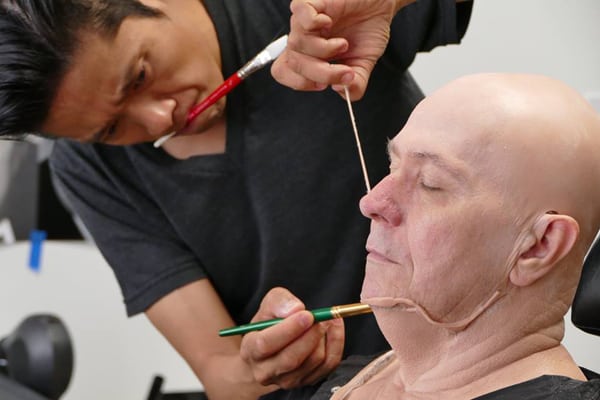 Kazuhiro Tsuji is both a fine artist and special-effects artist who was specifically recruited for the film by Gary Oldman to sculpt the prosthetics. “Because of those huge, realistic sculptures Kazu does, he looks at bone structure and anatomy. In my mind, Kazuhiro Tsuji was the only makeup artist who could pull it off,” Oldman told Deadline.

“The first step to it was taking Gary’s lifecast, and I took a lot of photographs of him in different expressions. Then, I gathered up images and any film left of Winston Churchill. I started comparing both faces, [evaluating] the differences, and I started to sculpt Churchill’s face onto Gary’s head cast, trying to figure out what could be done.

We were not creating a mask that looks like Churchill. You had to work with Gary’s face, so I couldn’t cover everything up, and had to understand the mechanism of the makeup, and also what would look that best in the film — what was wanted by the director, and by Gary.”

He also described the laborious wig-making process, and they needed a new wig for Oldman every 10 days of shooting due to how delicate each one was:

“Churchill had a really thin section and a bald spot on the top of the head, and I wanted to recreate it. I was talking with wig makers, Bob Kretschmer and Diana Choi. We had to use a fine wig, and also we had to make a foundation for the wig — we used a fine lace that had to be invisible.

We got European baby hair, which is really limited and expensive, and also mixed with Angora hair. The difficult part with baby hair is that it’s so hard to match the color because every source is coming from different babies. The amount is so small, so we have to mix them together to match. But making five different wigs, and constantly making it the same, was almost impossible, because it was done by hand, one by one.”

Lucy Sibbick and David Malinowski were in charge of applying makeup and wigs on set for Oldman, which took over three hours each day. They considered this to be a reasonable amount of time for such a precise application of a full face and head of the main character who had so many close-ups. In all, they used about 60 sets of facial appliances on Oldman, making new ones each day because they only survived one use. 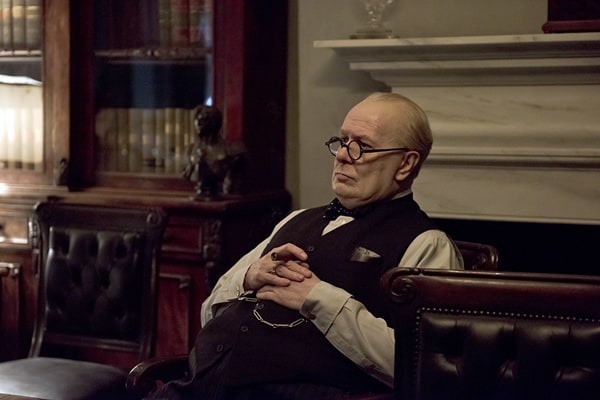 Oldman also wore a custom foam bodysuit to pad out his frame to Churchill’s size. Over that went Saville Row suits made by Henry Poole & Co. in the same chalk-stripe fabric from the same Fox Brothers mill as Churchill’s original suits. Likewise, another of Churchill’s tailors, Turnbull & Asser, made shirts and ties for the film. Everything, down to his hats, pocket watch, and cigars, was reproduced from the original makers wherever possible, according to Jacqueline Durran. She told Luxury London:

“I think it was about trying to make the most authentic picture of Churchill. We wanted, if we could, to tap into the skills that were there when he bought clothes from those suppliers. We decided right from the beginning that we didn’t want to stylise it … we wanted to keep quite close to the reality. A lot of the references were photographs of the actual people; it’s rare to work on a film where everyone is so photographed.”

We’ve said it before, and I’ll say it again — getting 1940s / World War II right in terms of costume should be base-level, minimum costuming for any frock flick. Because we have the photos! We also have tons of newsreel footage and movies. Primary research material is everywhere. 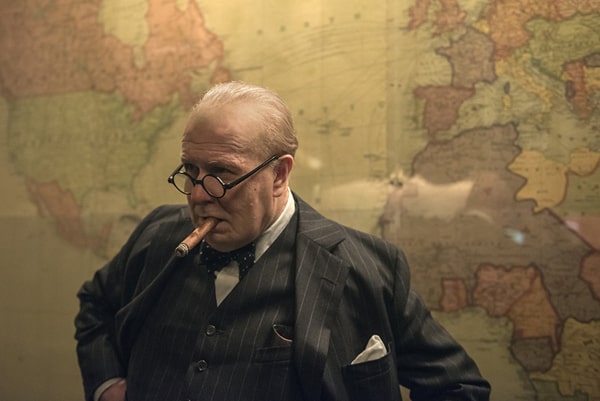 While verisimilitude was crucial for Churchill, hair and makeup designer Ivana Primorac told the Telegraph that precision was balanced with practicality:

“At one point I said to [director] Joe Wright, what cast number do we stop insisting that we try and make the characters look like the real people? There were certain characters which we paid great attention to, they’re not in the film very much, but we just really wanted to make them look period, and to make them look like the person so we could help them become that character. Some of the politicians we’d never even heard of, who were in the cabinet, we thought, well actually, we should pay attention to those, but it was really to help the actors perform.”

And certain characters did balance historical accuracy with a costume motif that fit into the film’s story. Talking to Rama’s Screen, Durran discussed the choice of outfit for King George VI (played by Ben Mendelsohn):

“The thing with this movie is that we had the photographs of the king at that time in his naval uniform in different functions, and we just thought it was something we wanted to bring to this, to see the king in his uniform. Thematically it’s about how he feels patriotic to his country, how he feels about being a king at this time, duty and service. And that’s what we wanted to bring out in his interpretation.” 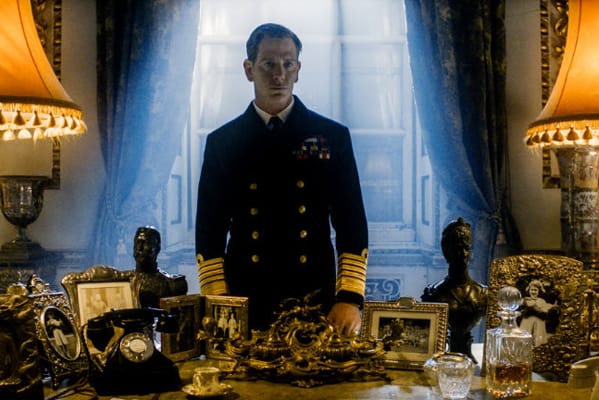 OK, yeah, it’s mostly guys in dark suits, so there isn’t much flash for the ladies. The one standout is Kristin Scott Thomas as Clementine Churchill, Winston’s wife.  Another amazing performance, which should come as no surprise — Scott Thomas always seems to play glamorous upper-class women with some kind of edge (whether good, bad, sad, or weird) in historical movies. Clementine is a sometimes outrageous, sometimes enigmatic character in history, and Scott Thomas does a fine job with the small, but important role she plays here. Jacqueline Durran’s costuming makes Clementine the most fabulous creature onscreen, as Durran described her approach in Vanity Fair:

“Clementine was sort of an eccentric. There’s a way in which posh English people dress that is really kind of mad. She’d wear fur coats and these crazy hats. We fine-tuned the ‘Clemmy’ style but decided the important thing to keep was the hat. I think she had been a milliner at one point. There was always something going on in the hair.” 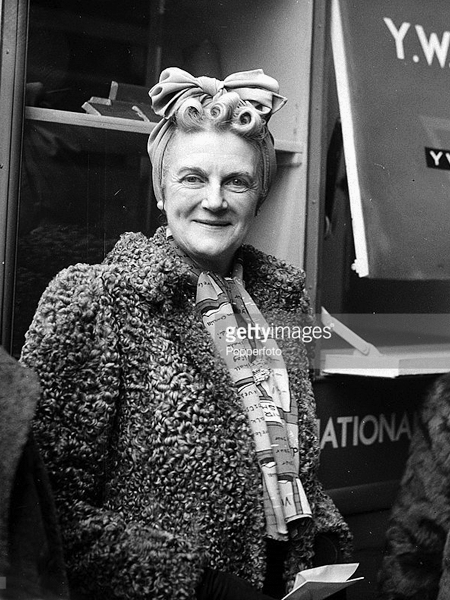 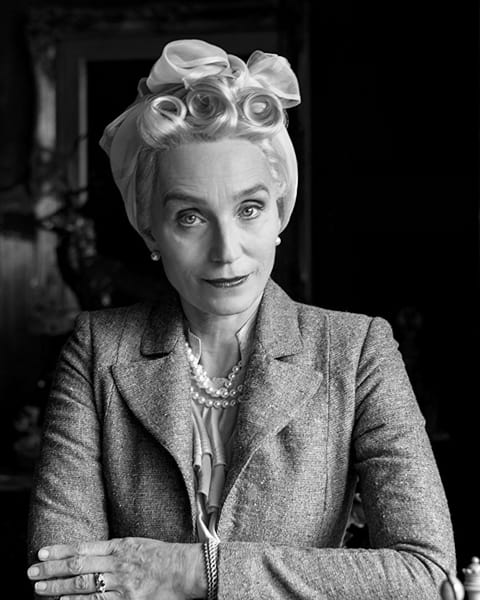 With authentic hair and clothes, Kristin Scott Thomas is quite evocative of the real Clementine.

“We had to work out how to create a character that looks extravagant but didn’t look crazy. For her hairpieces, we just made some confections out of nets, different hat pieces, and things that you would call a fascinator today — just to get the feeling of her style. But we honed the look down and molded it for Kristin. We wanted to express that keeping up appearances for her was keeping her style alive, especially after she moved from the country to 10 Downing Street.” 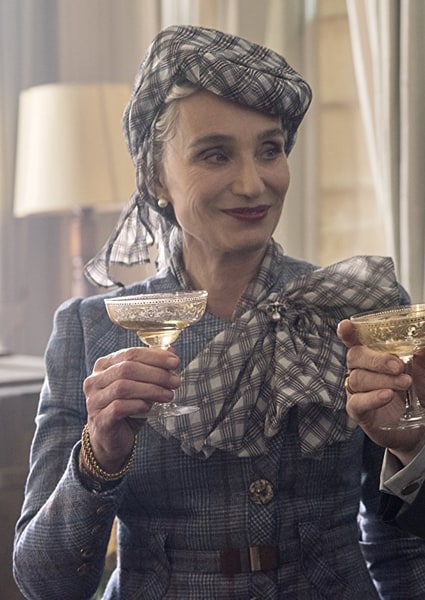 Clemmy was famous for her hat collection, so this feels very appropriate. 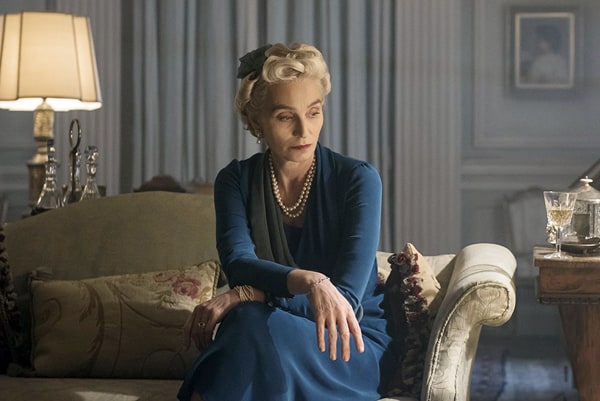 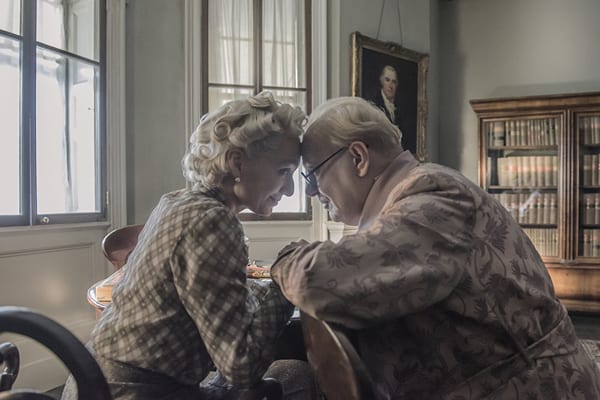 The passionate relationship between the Churchills is a small, steady theme in the film, as it was in Winston’s life.

The only other significant female figure in the film is Lily James as Elizabeth Layton, Churchill’s personal secretary during World War II. Due to the compressed timeline of the film, most characters don’t have much of a narrative arc that can be shown through costume. However, in a Focus Features interview, Durran notes that James’ character does have a small evolution in her clothing:

“There was a tiny arc for Elizabeth Layton. On her first day at work with Churchill, she misjudges how to behave as his secretary by wearing her Sunday best. By the time she’s working in the war room, she’s in a green suit that fits the job. Many of the clothes in the second half were dictated by the fact that as Churchill’s secretary, she often slept in the war room. So there was more knitwear and less formal dresses, blouses and skirts.”

Layton’s outfits give a good view of ’40s everyday wear and are a clear contrast to Clementine’s quirky style. 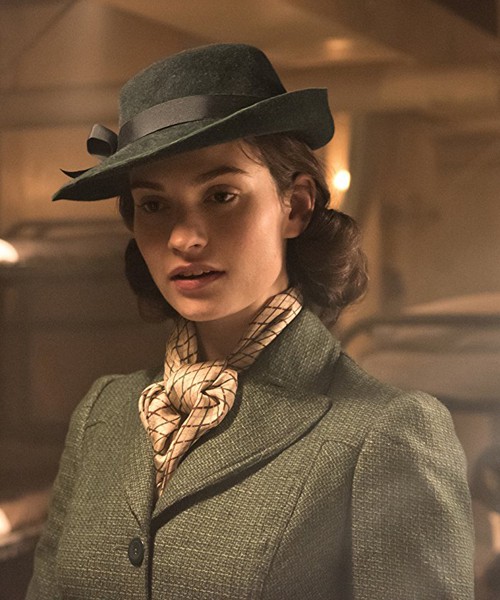 The green suit that’s just right for the job. 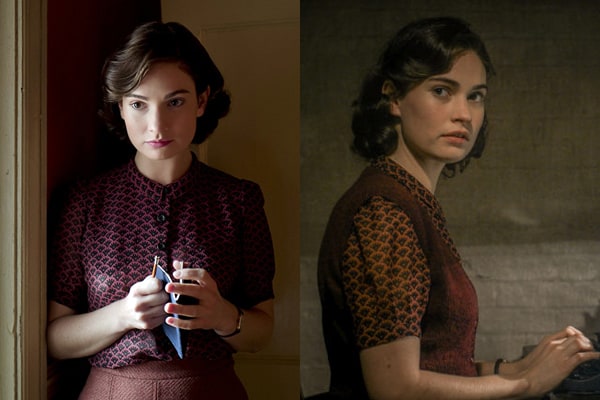 I love when films show characters wearing their costumes as a wardrobe, mixing and matching items as people do every day. In one scene, she re-wears this blouse with a sweater vest. 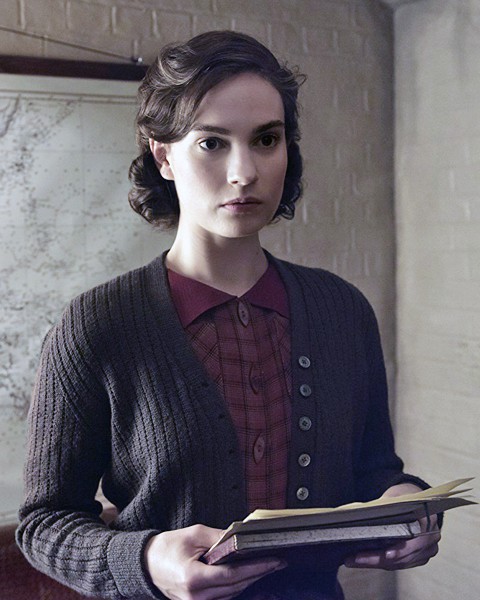 The soft sweater looks a little more lived-in as the story moves on.

Durran worked closely with production designer Sarah Greenwood, who is also nominated for an Oscar, for the look of the film. Like Durran, Greenwood had copious photos to work from and had authentic locations to film at. However, things have changed in 75+ years. She told Deadline:

“When we went around Downing Street and were talking to historians, they were saying, ‘This place was a virtual slum, and it was only Margaret Thatcher in the ‘80s who finally said, ‘This needs to be renovated.’’ It was really rough. 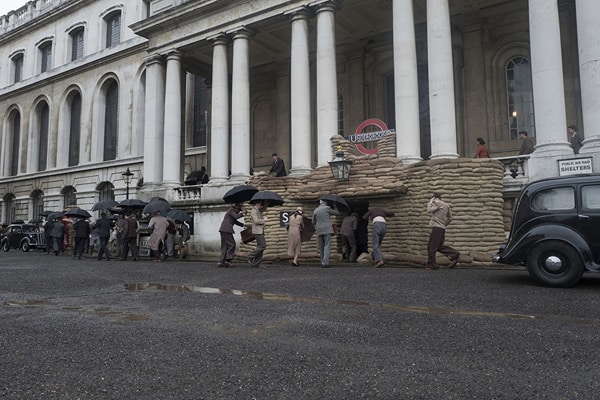 Darkest Hour tells a piece of history we probably know, except we don’t know it from the point of view of those who lived it. That’s what this movie tries to do, get inside the head of Winston Churchill in the pivotal moments (over about a month’s time) when he needed to convince the British government to fight against Hilter. We know how it turns out, but the journey to get there is made fascinating by Oldman’s rich performance. It’s like a watching an elaborate puzzle unfold.

The specific arguments Churchill has in the film with members of his War Cabinet may not be exactly historically accurate (Slate has a good rundown of the actual history), but the overall conceit is accurate in that Churchill didn’t have support for going to war when he first stepped up as Prime Minister. There are some typically Hollywood-ized fictional details such as an inspiring ride Churchill takes on the London Underground and Elizabeth Layton’s brother dying at Dunkirk. Tear-jerking in an obvious fashion, but they’re such small fabrications that they didn’t bug me.

Overall, I was so impressed by Gary Oldman thoroughly becoming Winston Churchill that I found the film utterly gripping. And the stellar work of the costume designer, makeup artists, and production artists was absolutely essential to immerse me in the time period so Oldman could shine. 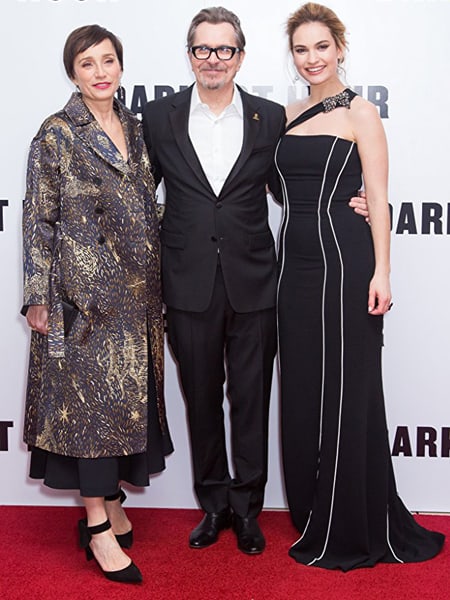 I’m just going to leave with this photo of Gary Oldman, Kirstin Scott Thomas, and Lily James at a Darkest Hour premiere as a reminder of what they actually look like outside of this movie. It’s pretty damn stunning how they were transformed into believable historical characters for this excellent film.

Have you seen Darkest Hour? Will you be getting the Blu-ray or DVD?