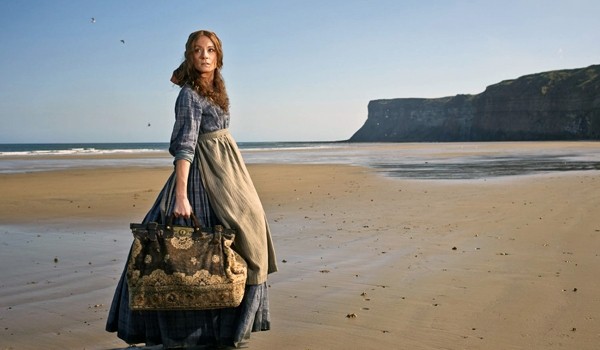 It’s not the frock-iest of frock flicks, but Dark Angel (2017) certainly delivers in the “untold stories of women’s history” category, so we’d be remiss if we ignored it just because there’s no silks, bustles, or fancy hairstyles. Starring Joanne Froggatt, formerly known as the woe-begotten maid Anna of Downton Abbey, this two-part TV movie tells the true story of 1870s serial killer Mary Ann Cotton.  The show aired in the U.K. last fall, but it’s just now showing on PBS, and it’ll probably turn up on streaming soon after. 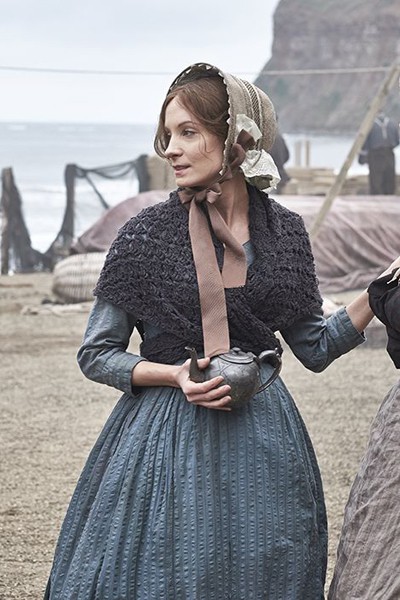 Cotton was convicted of murdering her stepson Charles Edward Cotton for insurance money, and she was executed by hanging on March 24, 1873. It’s suspected that she killed three of her four husbands, also for insurance money, all by poisoning. The mysteriously sudden deaths of 11 of her 13 children, her mother, and a lover are often blamed on Mary Ann Cotton’s poisoning as well. In some ways, you can hardly blame her for what she may or may not have done. She had a crap life, and anything she did was just adapting to the circumstances. Born to the poor working class and a woman, her few choices were marry some jerk, walk the streets, or slave away in the workhouse. So she did marry, and that the dude had life insurance would be awfully tempting if he wasn’t the best of men.  And if poison worked once, heck, it could work again if the next guy was no better. A girl’s gotta do what a girl’s gotta do. 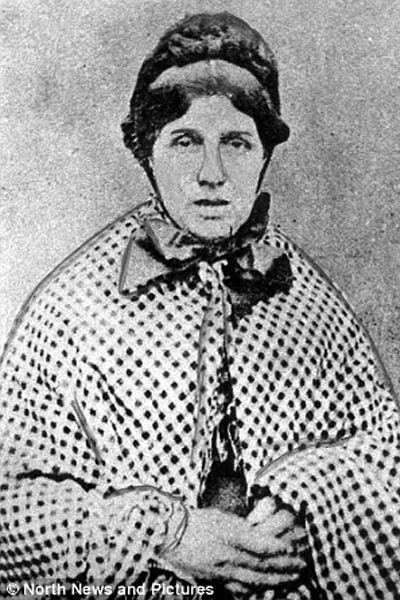 Surprisingly, Dark Angel isn’t all that dark and drab in the costumes, even though the characters are lower class and the setting is not posh. Mary Ann Cotton wears dresses in rich blues and greens, and subtle plaids and stripes add texture. Even the loads of derpy bonnets are well trimmed with modestly patterned ribbons and lined with bits of lace. Costume designer Caroline McCall worked on Downton Abbey and other British historical dramas, so she knows what she’s doing. 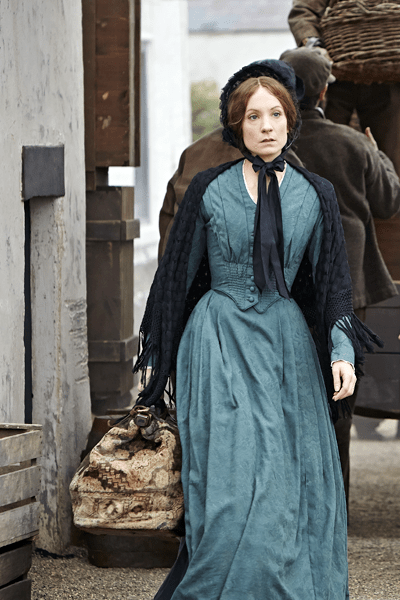 This is a great color on her! 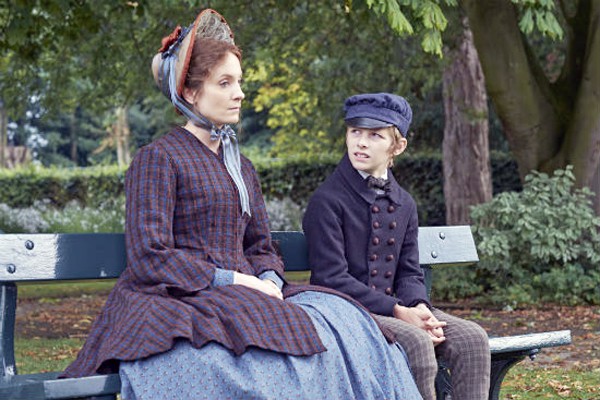 Plaid jacket, print dress, and coordinating (but not too matchy) trims on the bonnet — very nice. 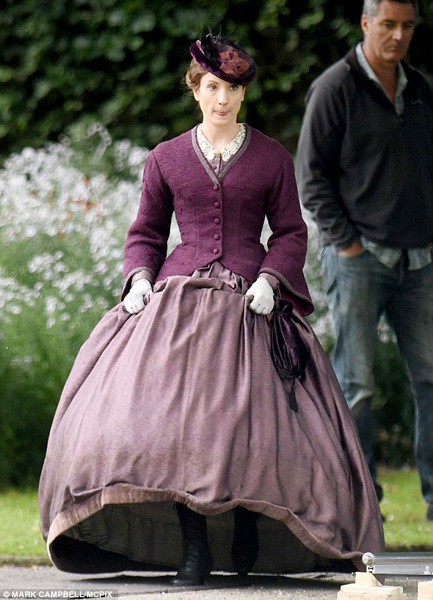 I usually hate 1860s, but this is such a smart outfit in lovely muted colors (& I forgive the skirt-hiking because it’s a behind-the-scenes photo). 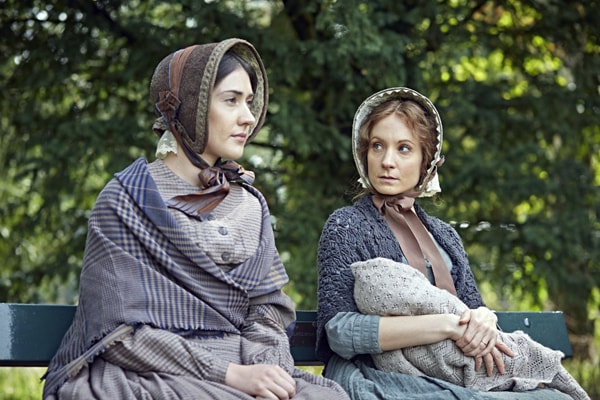 +1 for the plaids, but derpy bonnets are still derpy.

My only complaint is the somewhat too frequent scenes of Mary Ann with her hair hanging down — it’s the promo image, fer chrissakes! Everybody say it with me: Somebody needs some hairpins. Yep, if you’re a grown-ass working woman, all busy poisoning ‘n stuff, you put up your hair. This show is inconsistent with the hairstyling. 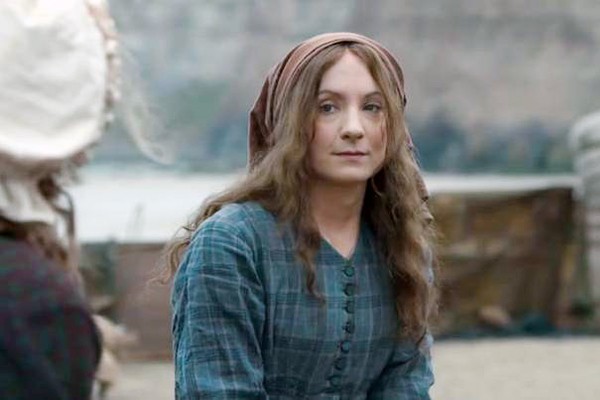 I don’t know why this was necessary. 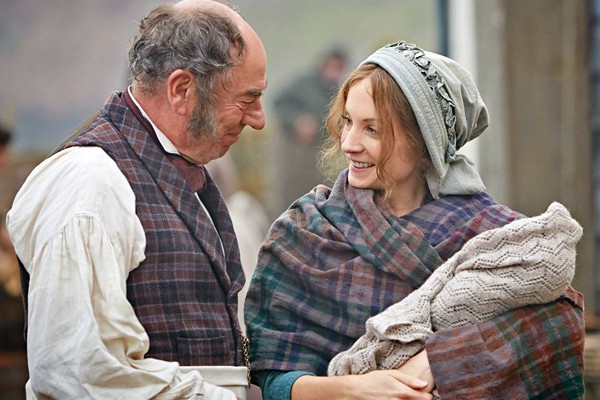 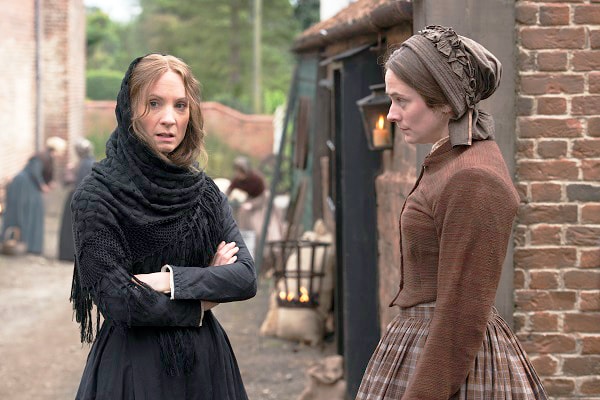 Mary Ann can’t get her hair together, but her friend can? Ugh.

Have you watched Dark Angel yet? What did you think?