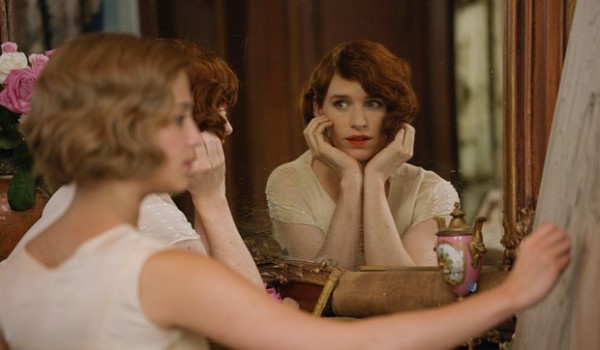 There’s NO way you haven’t heard about The Danish Girl, the 2015 and currently-in-theaters movie about Danish artist Lili Elbe, who was born Einar Wegener, and realized she was transgender in 1920s Denmark. The movie is prime Oscar bait, tackling a fascinating subject but coming under some criticism for casting a cisgendered Eddie Redmayne in a transgendered role.

The movie is based on a fictionalized story of Lili Elbe’s life. Neither are completely true to the real story — you can read a great run-down of what’s real and what’s fiction at History Vs. Hollywood. I think the main thing is that they compressed the timeline into the 1920s, while the real Lili (then Einar) married in 1904.* Taking the movie on its own terms, I found it an interesting watch. The story is one of the few that I’ve seen to try to understand the transgender experience, although I’ve seen some criticisms of how that process is depicted. There was a lot of emphasis on Einar’s wife, Gerda’s, experience, which I found fascinating — although I was conflicted as to whether that detracted from Lili’s story. But I’m going to leave the politics to those in the transgender community, and move on to the costumes!

*I’m going to call Lili “Einar” and “he” for the brief period in the movie before she began to realize her gender identity, and “Lili” and “she” once that realization begins. I hope that this is appropriate and accurate to how Lili presented herself.

Costumes in The Danish Girl

The costumes were designed by Paco Delgado (Les Misérables, 2012), and the film is a shoo-in for Oscar nominations up the wazoo, so he’s done TONS of press talking about his designs. The film sets the story beginning in 1926 and then going through at least the late 1920s if not the early 1930s. Overall, I feel like the costume design and execution was very nicely done from a character standpoint but had a few misses in terms of the historical period.

Despite The Danish Girl being a fictionalized take on Lili Elbe’s story, the filmmakers aimed to be true to the real history. When asked about challenges, costume designer Paco Delgado said in one interview, “One of the most difficult ones was being faithful to the story and being respectful to the real Lili; she wasn’t a fictional character, she was somebody who really existed” (Paco Delgado on Dressing “The Danish Girl”: “We Were All Contained by the Bravery of Lili”). I found that an interesting take, given that as you’ll see below, only about 50% of the costumes looked like they were actually IN the late 1920s. We’ll come back around to this point!

When we first meet Einar, Delgado dressed lead actor Redmayne in very tightly fitted, structured, high-collared suits. Delgado said, “Lili was entrapped, that body had to be like a prison for her. And one of the ways we did this was by making a restrained, highly formal costume for Einar, almost an armor” (“The Danish Girl” Costumer Explains Transforming Eddie Redmayne Into Lili Elbe). Although he seems natural, Einar comes across as very restrained physically. This works well, character-wise, and seems to align with how the real Einar dressed:

The pivotal moment in which Lili begins to realize her true gender identity comes when Gerda asks her to fill in as a model for a portrait that she needs to finish. This is the only costume that was reproduced from reality (Paco Delgado on Dressing “The Danish Girl”: “We Were All Contained by the Bravery of Lili”).

Lili likes these beaded mules, and so do I!

For a large part of the story, Gerda supports Lili’s gender exploration. Lili’s first outing as a woman is at a ball, at which she’s dressed in a very dramatic dress (lots of draped layers) but in subtle colors.

And here’s where I want to start talking about Gerda’s wardrobe as well, because here’s what confused me from a historical standpoint: “They were living a very restrictive, highly morally restrictive society in Copenhagen at the time and we, at the beginning especially, we created for for Gerda and Lili, these high collars, very tailored and really restricted palette with blues and blacks and grays, very like Edwardian fashion [emphasis mine]” Paco Delgado on Dressing “The Danish Girl”: “We Were All Contained by the Bravery of Lili”). Okay, so the designer was trying to show the repression of Lili and Gerda’s lives in Denmark by leaning the costuming a bit more Edwardian. But as I’ve ranted about before, don’t tell me your movie is set in a particular year and then ignore that year in your costumes. If it’s 1926, WHY are there all these natural (and fitted) waistlines? Both Lili and Gerda’s ball dresses emphasize their natural waists. This is so NOT 1926.

And, okay, Delgado specifically says he was influenced by designer Jeanne Lanvin and her theatrical robe de style styles. Here’s an example of one of her dresses in 1926, and yeah, it’s got a strong natural waistline: Sure, not everyone dresses in the most cutting-edge styles. But while Lili often looks like she stepped out of the early 1920s: Gerda (left) in a beautiful beaded navy party dress — with a 1918-19 silhouette. A much more appropriately-dressed (timeline-wise) character is the couple’s friend, dancer Ulla. She has a very colorful, theatrical wardrobe that Delgado based on the Orientalist designs of Paul Poiret: “We thought out of all of the characters she was a very Paul Poiret, sort of like fashion character” (Paco Delgado on Dressing “The Danish Girl”: “We Were All Contained by the Bravery of Lili”).

Ulla in multi-colored velvet with scarf and beads.

With a fabulous drape at the bottom.

In the second half of the movie, Lili and Gerda move to Paris, where both of their wardrobes modernize. According to Women’s Wear Daily, in “Paris, a place of a ‘more open, accepting society,’ Delgado shifted to brighter colors and more fluid fabrics” (“The Danish Girl” Costumer Explains Transforming Eddie Redmayne Into Lili Elbe).

Probably the best example of this is the mustard-and-print ensemble that Lili wears:

Looser fit, and great colors with the red hair.

This print is gorgeous.

Although it’s not all bright colors…

Some of the most interesting outfits were the suits that Lili wore in Paris that seemed to represent an in-between moment for Einar and Lili. The looks were gender neutral, which gets Lili into trouble, and I thought they did a great job creating an androgynous, 1920s-appropriate look.

One of Lili’s gender-neutral suits. And when Lili heads off to Germany to begin the operations that will physically change her gender, she has a FAAAAABULOUS printed green velvet ensemble.

Near the end of the film, Lili and Gerda return to Copenhagen, and Lili’s look mellows out a bit as she becomes more comfortable in public. It’s sweet to see Lili get a job in a department store and be “just one of the girls.” A few thoughts about the hair: in general, I liked the styling. In Denmark, Gerda has long hair that she always wears up in a nice 1920s faux-bob. At home, when she has her hair down, she has awfully modern, beachy waves … but this is a quibble, as she never goes out with her hair like this.

Lili begins in a bright auburn wig, but eventually grows out her own hair into a nice, waved bob. According to an article in Vogue, “Many transgender women have said they experienced a period of hyperfeminization when they first appeared publicly as female — ‘It’s your first moment to express yourself,’ Redmayne says — and [makeup artist Jan] Sewell decided that Lili would wear the loud wig at first. (Later, as the character settles into womanhood, Redmayne’s wigs grow more naturalistic.)” (Eddie Redmayne on Transforming into The Danish Girl).

Probably a wig on Redmayne, but meant to be Lili’s own hair grown out.

Finally, there’s been a ton of great press interviewing costume designer Paco Delgado. Beyond the articles mentioned above, here are a few more that are worth reading if you’re interested in the film:

And finally, I just need to mention that my favorite actor in the movie was Pixie the Jack Russell, who was in scene after scene and totally stole the show as far as I’m concerned!

HOW CAN I FOCUS ON ANYTHING WHEN THIS LITTLE FACE IS LOOKING AT ME??!!

If you’re a dork like me, you can learn more about Pixie in this video:

So, if you’re interested in the 1920s and/or the history of gender, or you want to be up on what is so obviously going to be nominated for a Best Costume Design Oscar, check out The Danish Girl!