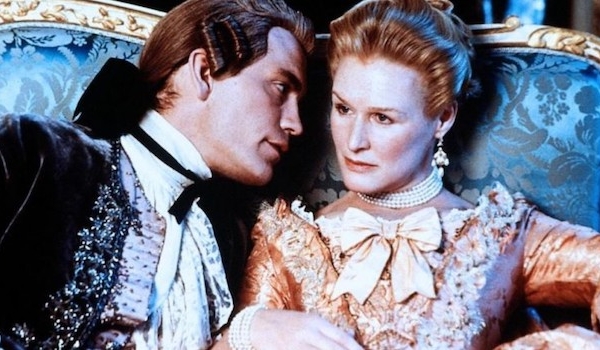 The beginning, middle, and end of all 18th century costume movies.  The plot has taken a while to grow on me, being somewhat dark and tragic (I don’t want to give anything away for those few who haven’t seen it), but over time the fabulous acting has made me enjoy the plot as much as the costumes.  DROP DEAD GORGEOUS 1760s-ish costuming, with a fabulous sequence at the beginning where Glenn Close and John Malkovich’s characters are dressed, allowing you to see the underpinnings and technology behind 18th century clothing.  Keanu Reeves isn’t TOO painful, and the rest of the cast is great.

Edited to add: Okay, it had to be said. This movie hasn’t aged as well as it could. It’s still really really good, but comparing the costumes to those in more recent/accurate films makes these appear a bit theatrical. In particular, some of the color choices are off in the women’s gowns (most French gowns of this era were one color in dress, petticoat, stomacher, and trimmings), although that can be forgiven as a theatrical choice.  In addition, the Marquise de Merteuil and Mme Volange randomly wear court dresses in non-court settings (like the opera?), and there are a few weird dresses interspersed that have wide poufy sleeves — which, granted, have a historical basis (see this portrait of Mme de Pompadour) — but that’s the ONLY time I’ve seen them in period, so they catch my eye as being “off” when I watch the film.  All that being said, the costumes are stunningly made, lush, elegant, luxurious, and (minus the few quibbles above) very accurate, so I’m splitting hairs here.