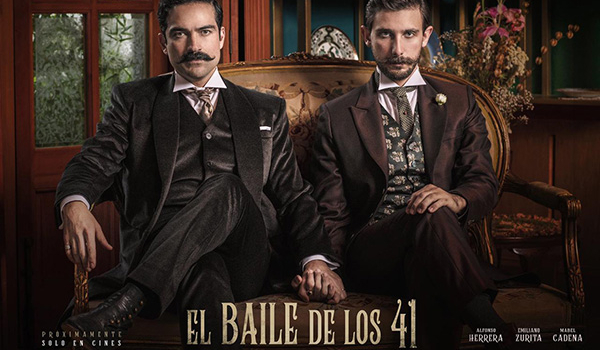 I wasn’t expecting a queer love story when I stumbled across Dance of the 41 aka El baile de los 41 (2020) on Netflix, because it seemed like just another historical telenovela (and I may have a review of some of those soon enough). So I was pleasantly surprised to find this movie that is based on an actual and apparently quite scandalous real event.

The film is loosely inspired by a police raid of private home in Mexico on November 17, 1901, where 41 high-society men were dancing together, about 19 of them in female drag. The Mexican president’s son-in-law, Ignacio de la Torre y Mier, was rumored to be one of the attendees, although he was not charged by the police. Historical details are sketchy, and most contemporary reports focus on the raid, not the individuals or what lead up to the event. So this movie invents a backstory and focuses on Ignacio de la Torre, beginning with his marriage to Amada Díaz, showing how he works for her father, the country’s president, and attempts to make a political name for himself. Ignacio does his marital duty by Amada, but it’s an incredibly unsexy wedding night and barely repeated. She’s unhappy and whines about wanting a baby — I guess she figured out too late that this was just a political marriage. She comes off as the least likable, least sympathetic character in the flick, but actress Mabel Cadena tried her best, doing historical research into the period according to an interview with UnoTV.com. And she notes: “This tightness of the corset plus 15 kilos of clothing on top helped me to build the entire internal world of Amada.” But it’s not just the old corset cliche, Cadena discusses the importance of the film’s themes:

“It not only addresses the issue of homophobia, but also others such as machismo, classism, discrimination, racism and misogyny, for me it is an urgent and necessary film to be able to continue reflecting.”

Early on in the movie, Ignacio gets flirty with a lawyer at the office, Evaristo, and offers to bring him back to his men’s club. Like many society gentleman of the era, he has a club — but this one is secret and queer AF. There’s an initiation ceremony, a fancy dinner, and a nicely filmed orgy, along with the typical library-style rooms for billiards, chess, cigars, and a touch of cross-dressing. Ignacio’s rakish charm comes out when he’s with the fellas, and there’s an easy camaraderie in the club scenes that make it look like a welcoming safe space in a Latinx culture otherwise stifled by required machismo. In an interview with NBC News, Alfonso Herrera, who plays Ignacio, talks about playing this role and speculates on Ignacio as a historical figure.

“You need to go to the past in order to understand who you are as a person or who you are as a society. What would have happened if Ignacio was not discovered as a gay man? He would have been one of the important Mexican figures from our history, but he was taken away from that because he was gay.”

“I think the main villain is not a specific character, but it’s the lines and the regulations that society puts [on people]. Society is the real villain here.”

The name of the film tells you where the story will go, so yeah, it’s another bury-your-gays / sad-gay-ending trope overall. Compared with the recent lesbian frock flicks (Ammonite, Portrait of a Lady on Fire), at least Ignacio and Evaristo’s romance feels less overwrought. These guys fall in love and have sex a few times, and neither of them angst about it significantly. Their situation is helped by the couple having a community to be out within, even if they have to hide from the overall society. This is closer to Gentleman Jack in attitude, where some people know the protagonist is queer and don’t care, though the majority of people still do disapprove and the specter of criminal repercussions hangs in the air. While the historical Dance of the 41 happened in 1901, the movie Dance of the 41‘s costumes are NOT accurate to the 1890s-1900s. Well, the men’s clothes look generically “19th century upper-class,” so I can’t nitpick that too much. It’s Amanda’s dresses that veer wildly back in time, and she looks like she’s wearing outfits from the 1860s-80s, first with hoop skirts and then with bustle effects. Only in two scenes does she wear something that passes for 1900. But, hey, at least her hair is up, right? At the engagement party, the women’s dresses look generically mid-19th-century. We don’t get a good look at Amada’s wedding gown, but we do see her rip apart the back of her gown’s bodice. Hard to tell if she’s anxious for her wedding night or what, but it’s weird! That’s a rather 1870s silhouette IMNSHO. The upholstery trim is strong with this one. OK, she has something that nods in the direction of 1900. But then she throws this tea party. And this outfit confounds me. And this is late 1870s, straight out of a Truly Victorian pattern. The full-length view is in the promo above showing all three main characters. She wears at least one more bustle gown like that — they’re fine! I have no problem with them, except the historical Dance of the 41 happened in 1901, so she’d be 30 years out of date. And here, in the very last scene of the movie, she’s wearing a plausibly 1900 blouse. The events of the film span maybe 2 years at most.

Have you heard of the Dance of the 41, the historical event or the movie?