I’ve been catching up on The Crown (2016) and enjoying what I’ve binged so far. Overall, the production appears to have taken great pains to maintain historical accuracy, and with so much primary source material in the form of photos and video, it’s a good thing, too. Allegedly costing $130 million, I gotta hand it to them for putting that money too excellent use on the costumes, which were designed by Michele Clapton of Game of Thrones fame.

Matt Smith plays the surprisingly dreamy Philip — I say “surprisingly” not because the young Duke of Edinburgh wasn’t hot (because he definitely was), but because Matt Smith is one of those actors whose heartthrob status always seemed questionable to me. That said Smith is a fabulous choice in casting; hell, I’d say 99% of the casting choices in The Crown were spot-the-fuck-on (John Lithgow scene chewing away as the master of all scene chewers, Winston Churchill, was especially brilliant). The only one I’m not totally convinced of is Claire Foy, who is absolutely capable in the role of Elizabeth, but as I was looking at images of Elizabeth on her wedding day, I realized that she looked far happier and far more relaxed than Foy portrays her with her enormous blue eyes darting everywhere. 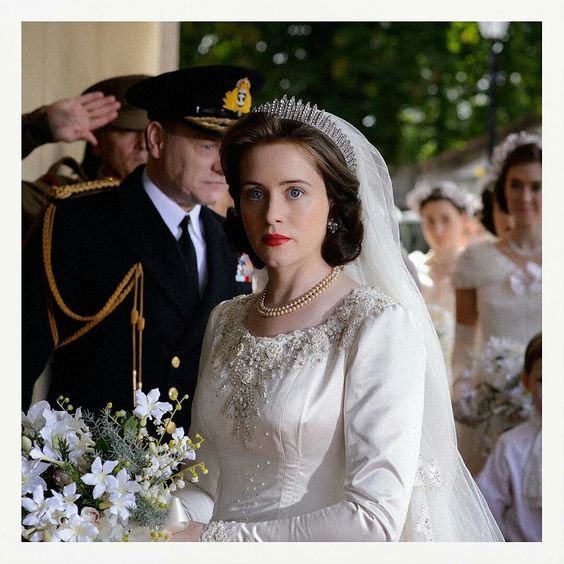 Get used to seeing this expression. She wears it a lot.

Anyway, this post isn’t about casting, but about costuming (rather than reinvent the wheel, I recommend checking out Movie Pilot’s side-by-side comparison of the actors with the real people). I’ve said before that you’d have to be monumentally lazy to screw up historical fashion from within the last 50 years — so with that in mind, I set out to answer the burning question: How accurate is the wedding of Princess Elizabeth in this episode?

The Crown costume team of 35 to 40 dyers, pattern-cutters, and sewers rose at peak times to more than 100 helpers, including students to embroider the Queen’s wedding dress. The un-fazeable Clapton remarked that it was achieved within a five-month lead time. ‘Nine weeks before, it was an empty room.’

The Crown opens on November 20, 1947 with Elizabeth’s wedding to the recently created Duke of Edinburgh, a certain Philip Mountbatten. One thing to bear in mind that isn’t really touched on in the episode (or if it was, I missed it), was that this was only two years after the official ending of World War II and Britain was still in dire economic circumstances with mandatory austerity measures enacted at all levels of society from the King on down. So, planning a grand wedding for Princess Elizabeth had to be balanced by the fact that the Royal Family was trying to set an example for their subjects by being the public face of rationing. This meant that everything had to be scaled back as far as humanly possible, without sacrificing all that pomp and ceremony that was expected of a royal wedding. To that end, Elizabeth used her ration coupons to purchase the materials for her wedding dress; the government kindly extended her a further 200 ration coupons to afford the dress, of course. But still, the purchase of the materials for the dress by Norman Hartnell resulted in a design that was considerably more restrained than the rank of Princess may have called for in less straitened circumstances.

So, let’s compare the original wedding gown to the film version, shall we? 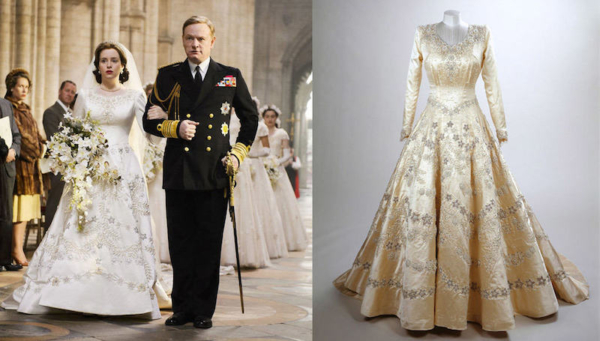 Michele Clapton is well known for her use of embroidery and beading from her work on Game of Thrones, so this stuff is right up her alley. 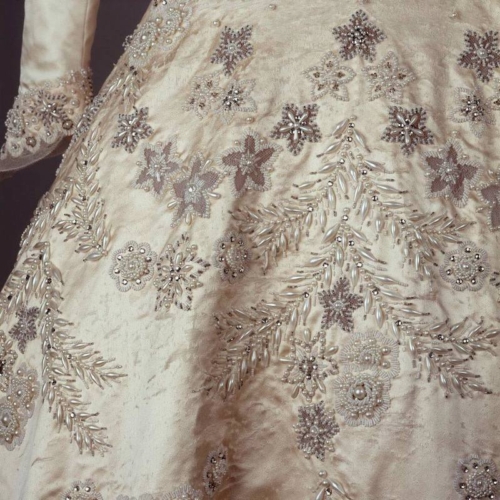 Let’s all just take a moment to appreciate the stunning embroidery and beading on QEII’s wedding gown. Via Instagram.

In all the images I’ve seen online of the original wedding dress, it appears that it really is more of a warm, buttery white, but the film dress reads more of a true white. I can only imagine that this decision had something to do with lighting on the set, since it’s pretty clear that the costume crew studied the original very closely. Another evident difference is that the film version is less shiny than the original, again probably due to lighting issues on set. I’m not sure if the difference in the necklines is due to the still being shot from slightly below, so the depth of the V doesn’t appear to come down as far on Foy’s chest as the original would have. 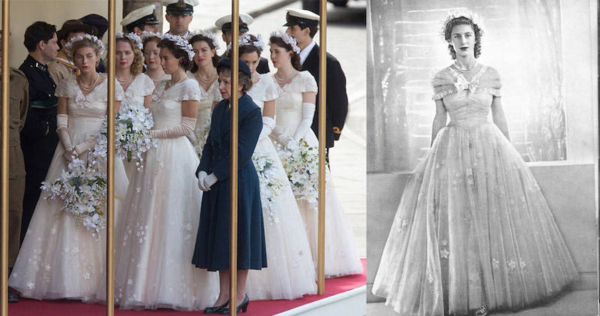 Next are the bridesmaid dresses. I think they did a pretty decent job, though I’m having a hard time telling if the bodices are ruched the same way they are in the originals. Again, the white is much brighter on the film dresses than the original. 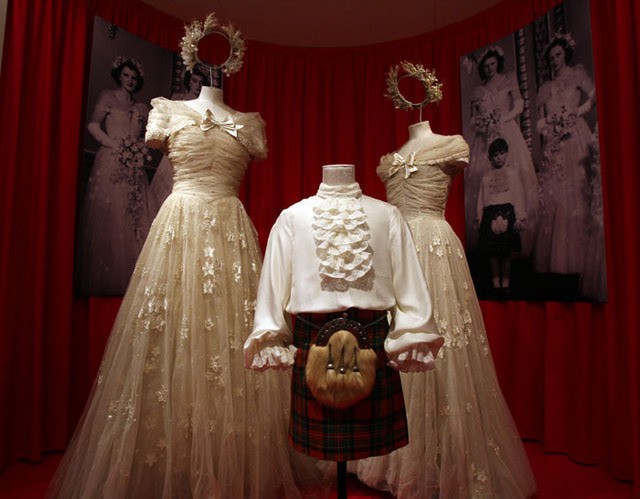 Two of the original bridesmaid gowns on display.

Are you watching The Crown on Netflix?