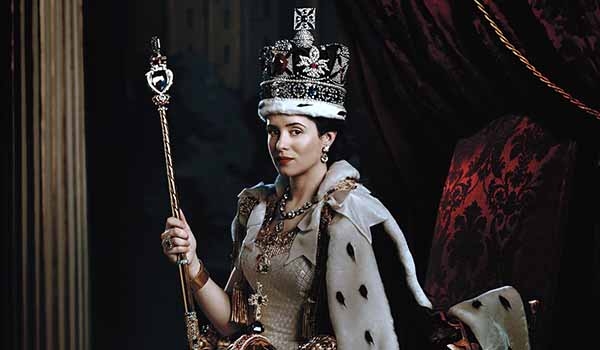 Guys, to be honest, I was pretty let down by the fifth installment of Netflix’s The Crown. I had been expecting a whole lot more costume content, especially since it dealt with the coronation, but there were hardly any worthwhile shots of the stunning Swarovski-commissioned replica of Queen Elizabeth II’s coronation gown. This has caused me to be very grumpy.

Anyway, yes, you heard me right…Swarovski approached Angels Costumiers to make the replica in 2012 as part of the Queen’s Diamond Jubilee; it was displayed at Harrods during the Jubilee and then packed into storage. When Swarovski caught wind of the production, they offered the gown to show costumer Michele Clapton, but she initially turned them down, concerned that the dress wouldn’t fit lead actress Claire Foy, and thinking she’d have enough time to reproduce the dress in-house. The replica gown commissioned by Swarovski and created by Angels Costumiers.

Well, that didn’t exactly work out as planned, and when Clapton discovered she was running out of time, she got ahold of Swarovski and accepted their offer to loan out the gown. Turns out that the dress actually fit Foy better than expected, despite being a little too long (higher heels than normal were required to make sure the hem cleared the ground). The coronation robe, on the other hand, was a collaboration between the show’s costume department and the Royal School of Needlework. Blink and you’ll miss it, though, since the vast majority of the coronation scenes are intercut with the actual black and white footage of the real Queen’s coronation. All told, you get to see hardly anything of the coronation gown. If you just ignore the weird wrinkle across her midriff, the dress fits pretty well.

The real coronation gown was designed by Norman Hartnell, the same couturier who designed her wedding dress and countless other gowns for the young QEII. He offered Elizabeth several sketches of various styles but the seventh, and last, design won out (with a few tweaks requested by Her Majesty). Hartnell’s sketch of the final gown. Here you get a pretty good look at the ladies-in-waiting, but in the show, they’re barely shown which makes it hard to do a comparison of the real gowns versus the show reproductions.

The symbolism of the motifs in the gown itself is fascinating. There’s the Tudor Roses, emblems of both Elizabeth’s namesake, Queen Elizabeth I, as well England itself. The Thistles are, of course, referencing Scotland; the Shamrocks, Ireland; and the Maple Leaf, Canada. Those are perhaps the most obvious motifs that the vast majority of people these days could identify. But what about the other emblems? There’s the Welsh leek, the Australian wattle flower, the New Zealand fern, the South African protea flower, and the lotus flower of India. It doesn’t stop there, but for brevity’s sake, I’ll just refer you to this handy explanation of all the various symbols and symbolism in the coronation gown.

Detail shots of the skirt, showing the Tudor Roses, Maple Leaves, Wheat Sheaves, and various other emblems of the Commonwealth as it existed in 1952.

The outfit that got by far the most screen time was the colobium sindonis, a.k.a. the anointing gown, a simple white linen gown that had a distinct Victorian flavor to it (it’s that pleated collar that screams “1850s bertha” to me). The colobium sindonis was designed by Hartnell to be worn over the coronation gown, but it looks as if the show simply had Foy wearing it on its own. Given that the Queen did not have the luxury of undressing and redressing between scenes, the linen dress had to be engineered to quickly slip over the coronation gown and fasten down the back (probably with snaps, though I haven’t been able to find anything to corroborate this). It was the responsibility of the Duchess of Devonshire, as Mistress of the Robes, to get it securely on the Queen in the scant time allotted before the anointing ceremony began, all while wearing her own cumbersome gown, robe, coronet, and of course, gloves. Claire Foy wearing the reproduction colobium sindonis made for the show. The colobium sindonis worn by Queen Elizabeth II during the anointing ceremony. It was also designed by Norman Hartnell. The Duchess of Devonshire, Mistress of the Robes, fastens the colobium sindonis over the coronation gown.

Some awesome person made this gif and uploaded it to Tumblr. It’s the only footage I’ve been able to find of the colobium sindonis actually going on over the coronation gown.

Thank goodness for You Tube… Someone uploaded color footage of the beginning of the actual anointing ceremony (the footage cuts away once the canopy is in place and resumes after the anointing) where you can see the entirety of the dress in motion. The pleating on that skirt. bites fist

As you can probably infer, I’ve spent a ton of time describing the actual coronation gown and not a lot about the show’s version of both gowns. That’s because they’re barely shown on the screen. Honestly, this is one of the most important historical ceremonies still in existence, but we see more of Wallis Simpson (Lia Williams) in her skin-tight white satin evening gown than we do of the Queen’s robes. LONDON, ENGLAND – JULY 25: A woman admires Queen Elizabeth II’s Coronation Dress and Robe in exhibition in Buckingham Palace celebrating the 60th anniversary of Her Majesty The Queen’s Coronation on July 25, 2013 in London, England. The exhibition, ‘The Queen’s Coronation 1953’, brings together an unprecedented array of dresses, uniforms and robes worn at the historic event. In addition, paintings, objects and works of art relating to the Coronation are also on display. (Photo by Oli Scarff/Getty Images)

What did you think of the episode “Smoke and Mirrors”? Share it with us in the comments!