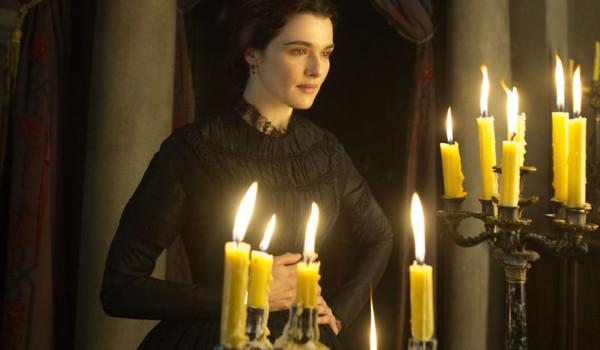 I keep hoping that Trystan will get around to watching the 2017 My Cousin Rachel, the new adaptation of the Daphne du Maurier gothic novel first adapted in 1952 with Olivia de Havilland, since this is the kind of tortured Victorian story she likes, but no dice. So, I’m reporting for duty, although let it be known that Tortured and/or Sad Victorians are not my bag. Hey, at least these ones are English … the French stories are worse!

So the basic set up is that in mid-Victorian England (the film is set in 1840), Philip is taken in by his uncle as a young child. He grows up adoring his guardian who, late in life and not too healthy, goes to Italy for “the cure.” There, Uncle meets and marries an Italo-Englishwoman named Rachel, and writes home to Philip about it. At first all goes swimmingly, then Uncle decides Rachel is trying to poison him and writes to Philip about it, then dies. Uncle has left everything to Philip, but Rachel turns up at the family homestead in England … and things get complicated.

As always, Rachel Weisz (The Fountain, Agora) turns in a thoughtful, nuanced performance as title character Rachel. I didn’t love all the plot twists the filmmakers came up with for her character (there’s some very UN-Victorian hanky-panky), but Weisz plays them well. 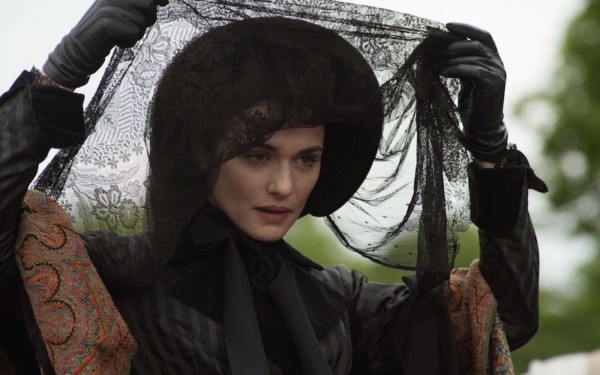 Then you’ve got Sam Clafin as Philip. His performance was good, although the character was such a nitwit that I had a hard time enjoying him … Plus I spent most of the movie trying to decide where I knew him from. 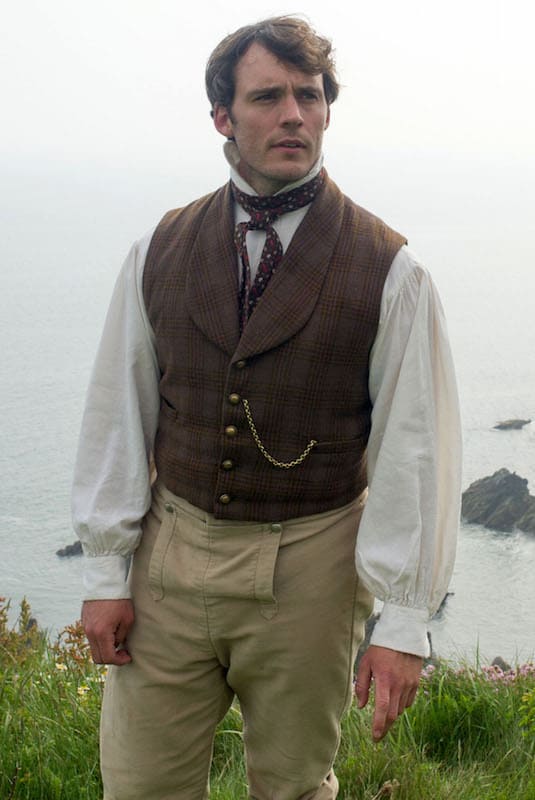 Sam Clafin as Philip, king of the nitwits

Color me semi-traumatized to realize he played Finnick in The Hunger Games: 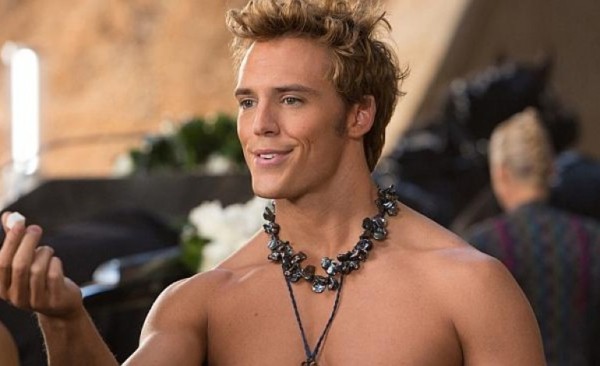 Also, all of you Iain Glen fans should know he’s in this: 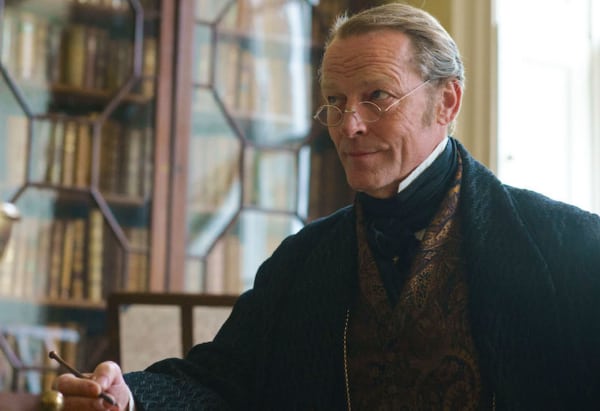 Yes, from Game of Thrones and Wives and Daughters.

The costumes were designed by Dinah Collin (Pride and Prejudice 1995), and, in general, I thought she did a great job both with the characterizations and getting the details of 1840 costume right … with a few exceptions.

Collin told The Telegraph that they wanted to set the film very firmly in 1840, but they wanted to contrast Rachel, wearing up-to-the minute styles with the out-of-date locals:

“One of the things which came up in discussions was that we thought she should look like something from outer space to the Cornish locals. We went to the National Portrait gallery to establish where in the 19th century her style should be. We wanted her to look really elegant but also classic so we set her in the 1840s.” (My Cousin Rachel: the story behind Rachel Weisz’s hauntingly beautiful costumes) 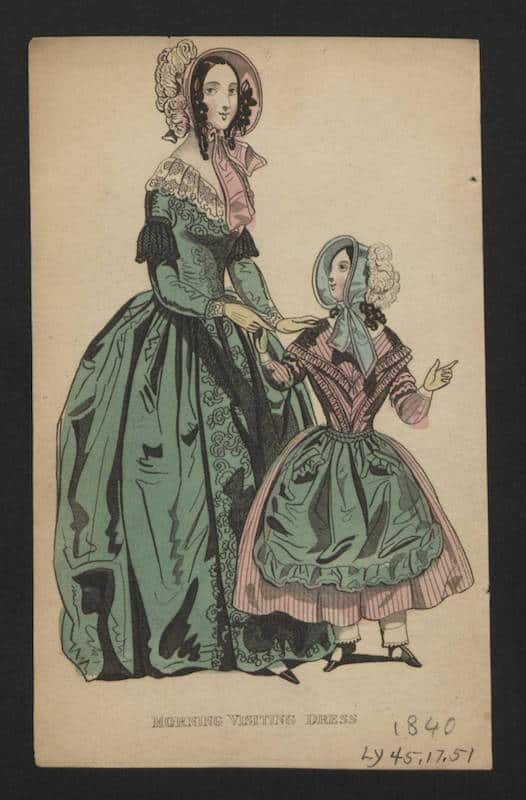 Would they really have been THIS out of date? By historical accuracy standards, it’s a bit much, especially given that the styles of 1836-9 would be easy achieve by stitching down those sleeves into pleats (or simply recutting and remaking the sleeves). But I can see that that wouldn’t have had as strong a contrast with Rachel, and they’re not on screen very long. 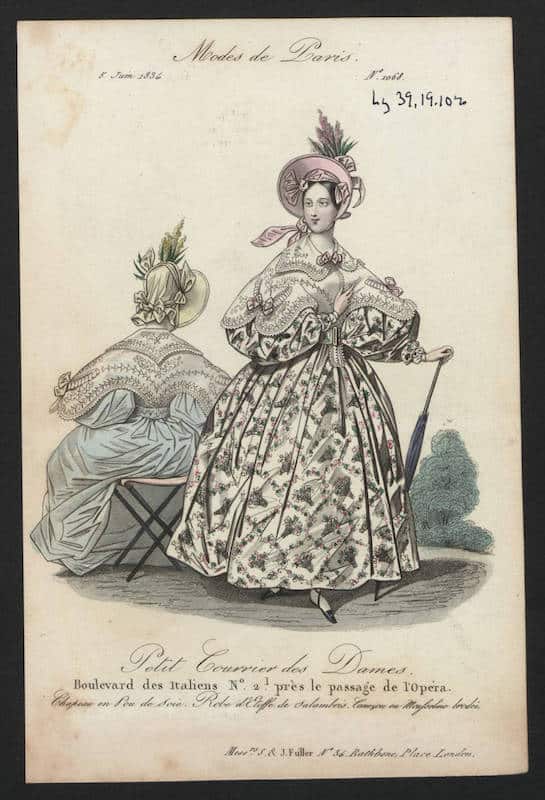 Compare 1834, with the huge sleeves… | Metropolitan Museum of Art 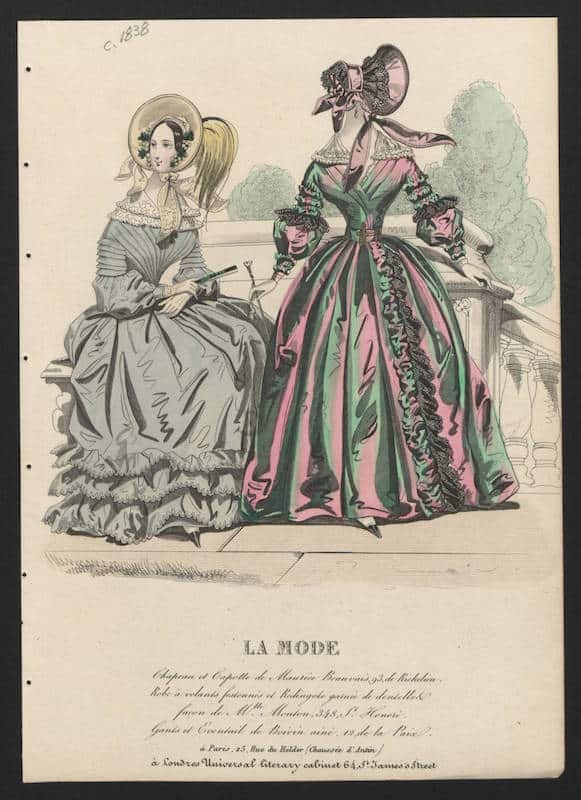 …with 1838, where the sleeves are generally pleated with a small puff further down. This would be a very easy alteration of those huge-sleeved gowns  | Metropolitan Museum of Art

Rachel’s wardrobe is, of course, characterized by her being in mourning. In addition to the dress above, she has a black riding habit: 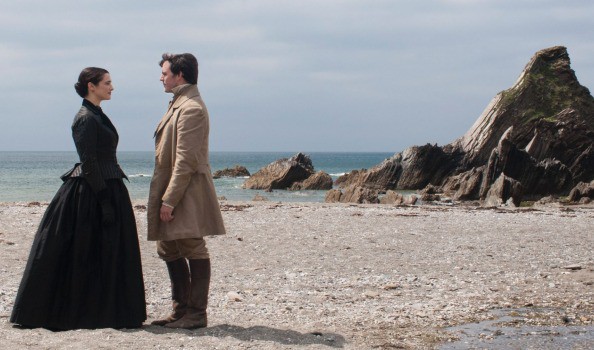 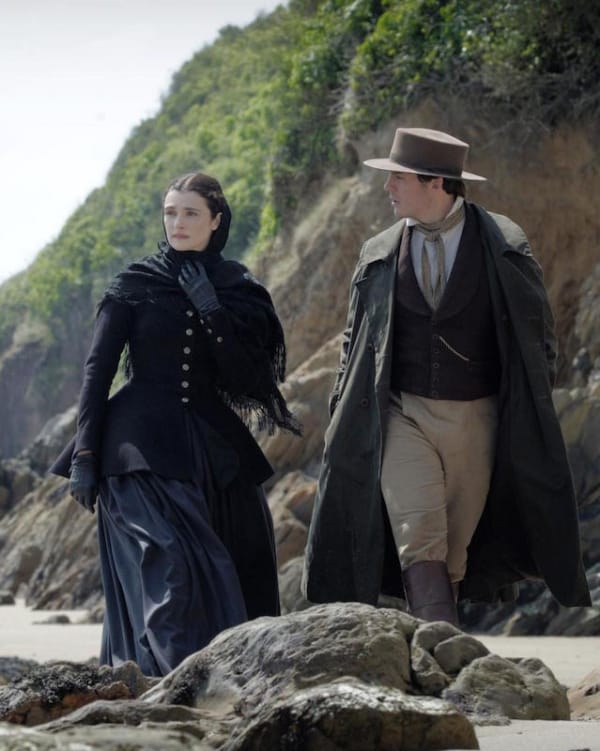 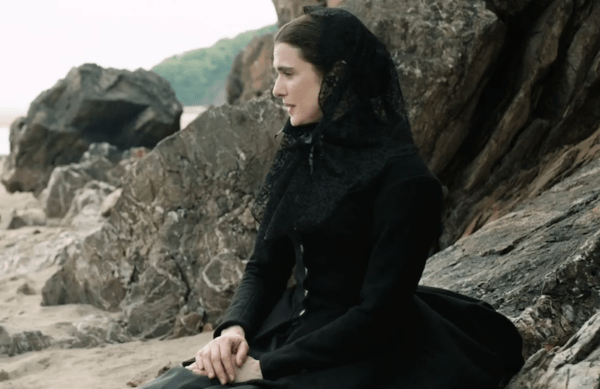 The main issue I had was that they put her in a black lace veil instead of a bonnet or hat WHILE RIDING. Which, NO. No Victorian lady would wear anything other than a hat for riding. Plus, practicalities — this sucker would blow right off!

Rachel also has a black evening gown with pretty sheer fabric at the neckline and lace at the sleeves, which she wears to a Christmas party. Collin says of the necklace:

“The pearls are a big subject matter. We had them made based on a painting we found from 1835. They were supposed to have been worn by his mother but we didn’t want it to be fussy.” (My Cousin Rachel: the story behind Rachel Weisz’s hauntingly beautiful costumes) 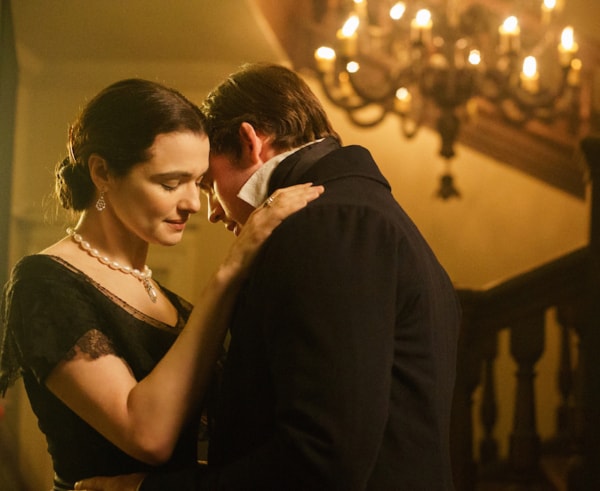 Of course, since Rachel’s character is mysterious and dark, the fact that she’s wearing mourning allowed for some great, gothy veil usage: 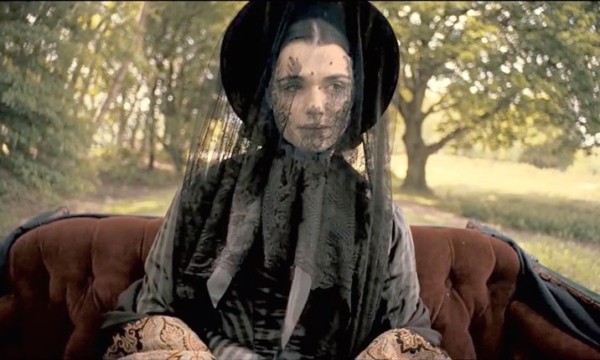 The primary issue I had with Rachel’s costumes was the fact that she came out of mourning waaaay too soon and in totally the wrong way. Victorian mourning had very set rules about length of time and the use of color. A widow should be in full black for two years, and there’s no way two years elapsed over the course of the film … and after “full mourning” would come “half mourning” in which one could wear grey or lavender, not suddenly bust out in fun colors as Rachel does. I can see how strong colors would read more as a contrast to a modern audience who wouldn’t know any of this, I’m just nitpicking here. 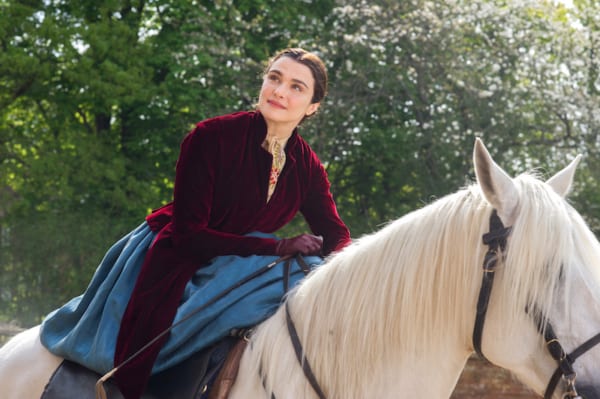 Out of nowhere she goes from all-black to this cranberry and blue ensemble. 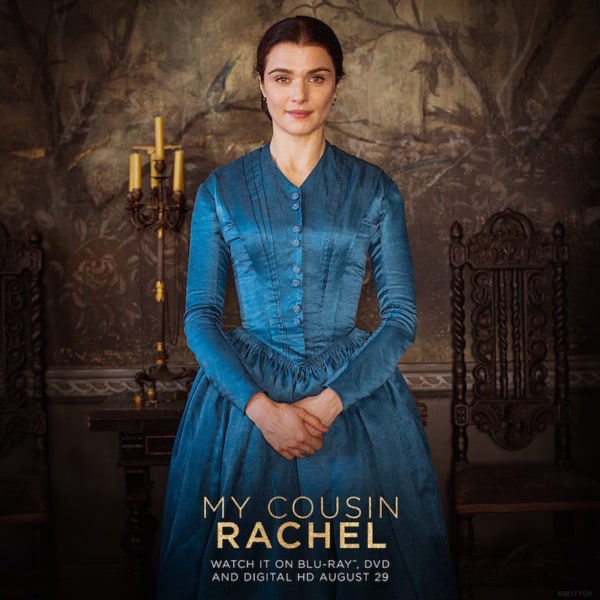 Then rocks this blue dress. 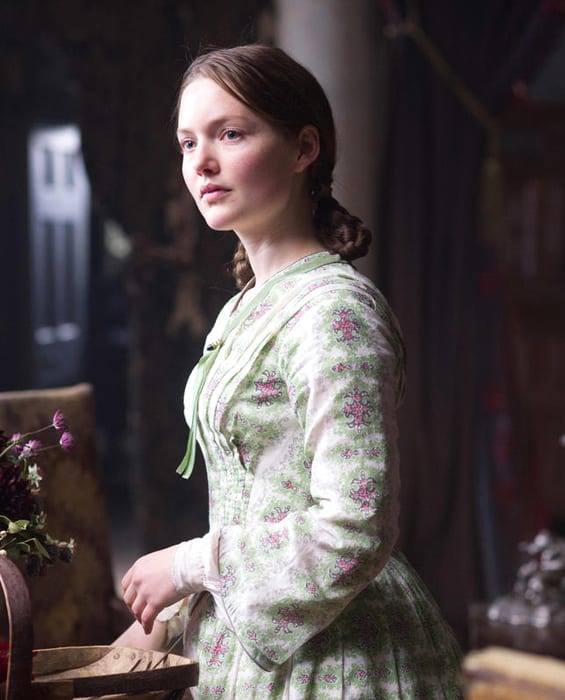 A lovely print and perfect style lines for the era, even if I have questions about the hair. 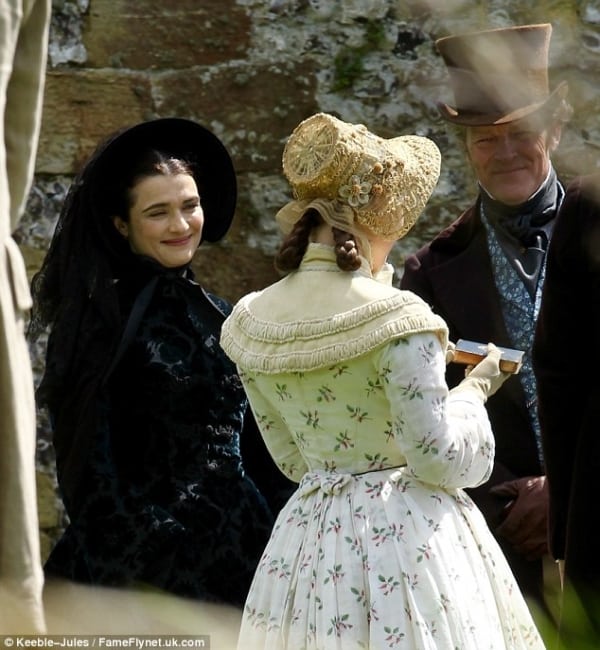 Another light printed dress, more weird braids. Is she Pippi of Cornwall? 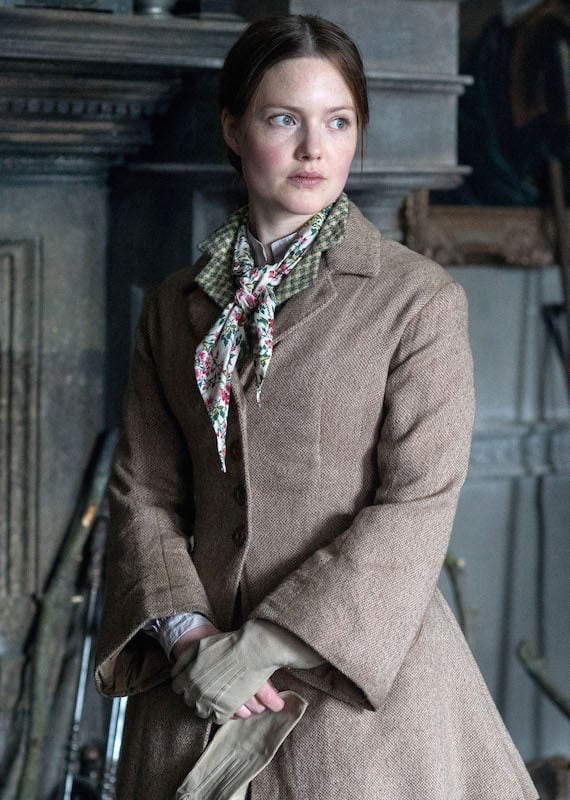 A practical yet still light suit. 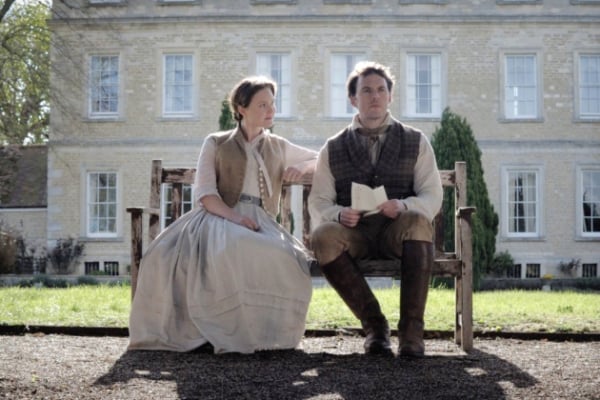 She seemed awfully casually attired in this scene, given that there’s a MAN around (a may-an!).

There’s a nice behind-the-scenes featurette you can watch on YouTube that discusses the costumes:

Have you seen the latest My Cousin Rachel? What’s your take?