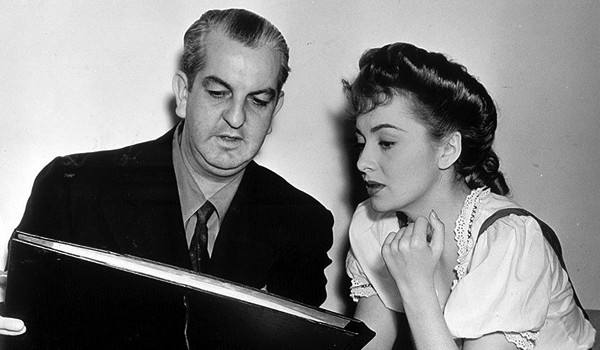 With his extensive resume, of course he created more than a few historical gowns, and while they may owe more to contemporary fashion than historical research, his designs were always flattering to the actress and appealing to the eye. As Orry-Kelly said:

“I have always felt if you give a star what is most becoming, even if the style may be new to her, with tact you can usually win out. Tact, that nice clean four letter word, what an important part it plays in the life of a dress designer.”

A couple years ago, Orry-Kelly’s unpublished memoirs surfaced and became, not just a book, but the subject of a documentary by Australian filmmaker Gillian Armstrong (best-known for her 1994 adaption of Little Women). Both book and documentary are titled Women He’s Undressed, and the film is available on Netflix — totally worth watching for loads of golden-age Hollywood dish from one of the few openly gay men in Tinsel Town at the time. It’s a fascinating look at the designer, showing how Orry George Kelly left his small hometown of Kiama, Australia, first for Sydney, and then for New York in 1921. That’s where he roomed with a certain actor named Archie Leach, and the two moved to Hollywood together. Leach would become Cary Grant, while Orry-Kelly turns his art skills into costume design. Many of Orry-Kelly’s surviving paintings have a historical feel. There’s plenty of costume content in the documentary as well, such as Orry-Kelly commenting on Bette Davis’ bustline and fitting tricks he used to work with her specific shape. In the book, he commented a bit tartly:

“I think of Bette as a period piece, she belongs in costume clothing. Her feminine figure always looked so well in the Victorian period. Quite often her behaviour was Victorian too.”

Bette Davis shows up in quite a few of these highlights of Orry-Kelly’s historical costume work. He did Victorian, Renaissance, 18th century, and more, all with his amazing style. Dolores del Rio gets both frothy ruffles and sexy black in this comedic pre-Code 18th-c. romp. The story turns on Davis’ character wearing this scandalous red dress to a ball. Orry-Kelly had to design a gown that would seem red on black-and-white film. This Spanish infanta-styled gown is proof that Orry-Kelly could reference a portrait when he wanted to (or had time, perhaps; c’mon, the guy designed 60 movies a year!). And extends to the 1920s, showing Orry-Kelly’s range. Merle Oberon in late Victorian by way of 1940s. Marilyn Monroe’s sexy faux-1920s dresses got a lot of acclaim. But the 1920s women’s wardrobe Orry-Kelly designed for Tony Curtis and Jack Lemmon was both historically accurate and attractive!

Mame’s wardrobe is far more 1950s than 1920s-1940s, but Rosalind Russel is gorgeous and she coordinates with her apartment.