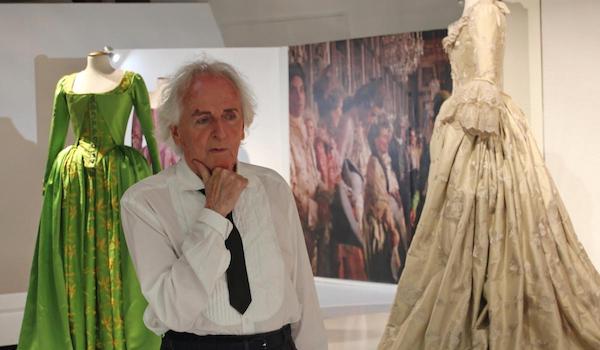 I don’t know if I always love the costume designs of Christian Gasc, but he’s one of THE period film designers in French cinema, so he’s an important person to know about if you’re into historical film. Despite being way too into back-lacing dresses, he’s won the César (the French Oscar) four times, for Farewell, My Queen; On Guard; Ridicule; and Madame Bovary; and he was nominated for Rendez-vous and The Women of the 6th Floor. There’s a number of video interviews with him available online, so if you’re interested, do some searching — I’ve included the few bits I’ve been able to track down from print sources below.

Gasc’s first film, starring Isabelle Huppert as Swiss artist Aloïse Corbaz, who was institutionalized for most of her life. The weirdness of a French version of such an English story, but Trystan didn’t hate it, so okay! Isabella Adjani plays writer Emily Brontë, Isabelle Huppert is Anne, and there appears to be a lot of brown. No combs or irons owned by this family! This looks reasonable, if drab. I live in anticipation of someone explaining Huppert’s partially crimped hair.

Painter Jean-Honoré Fragonard (1732-1806) and his anatomist brother fall in love with the same woman. I’m liking what I see here!

A filmed version of the opera, set in Tunisia. I know nothing about Japanese kimono!

Late 18th-century courtiers (including Fanny Ardant) try to out-snark each other.

From a historical basis, I take certain liberties taking into account the morphology for example. The actors must be comfortable when they ride horses. The modern look also comes from the choice of fabrics or a detail. On Ridicule, by Patrice Leconte, I had asked Fanny Ardant to remove her choker while a countess like her was supposed to wear it. It was fine, she hates having something around her neck (my translation of Toulouse. Christian Gasc présente des costumes de « Ridicule » et « Le Bossu »). Reviewers plopped over these costumes.

But there’s a whole lot of princess seams and back lacing.

The wigs get WHACK at the end!

But overall, it’s a decent attempt at late 18th-century costume.

A 17th-century-set swashbuckler starring Daniel Auteuil and Vincent Perez. This one is weirdly on my watchlist … for someday. Less of this, though — although Perez is SO pretty! Ah yes, the proverbial “I lost my dress/jacket”!

The two years that French author Stendhal spent in Italy, sometime in the early 19th century. When, apparently, the hair was stringy and the eyeliner was smudgy.

For example for Sade, with Daniel Auteuil, I did not want to fall into the cliché of the writer dressed in blue (under Louis XVI, it was the color of the aristocrats). I imagined a red suit: we were during the Terror and the blood flowed afloat (my translation of Toulouse. Christian Gasc présente des costumes de « Ridicule » et « Le Bossu »). I like the collar and lapels on the left!

In 1849, a French-Canadian woman (Juliette Binoche) falls in love with a convicted murderer. Set in 1940s Paris, a handyman tries to help a prostitute with her singing career and love life. Nothing better than the old, unattractive man hanging with the young hotties! A highwayman hides out in a convent in the 18th century. But I can’t see enough to really judge.

“High-school student Bernard discovers that he’s the fruit of a one-night stand by his mother,” per IMDB. Set in the 1940s. The contrast between a wealthy family and another that works as their servants, in 1962 Paris. The final days for Marie-Antoinette at Versailles, seen through the eyes of her fictional reader. I disliked to hated most of the costumes in this film. Marie-Antoinette dressed 10 years out of style. And then the one really great costume!

Yet another adaptation of the bored-woman-has-affairs-in-mid-19th-century-France novel.

The Costume Designers Valerie Ranchoux and Christian Gasc chose an extraordinary array of colors which either contrast or echoes with the tones of the production design and nature. Emma first dresses are different shades of greens (green is the color of hope and youth) and as her character develop stronger colors are introduced (red, orange, and almost poisonous purple) and the end her dress completely blends with the nature in the fall (yellows and greens) (An Exclusive Look at the Costumes and Behind-the-Scenes Secrets of ‘Madame Bovary’).

The costumes were the most time-consuming and labor-intensive part of the film. The costume designers (Christian Gasc and Valérie Ranchoux) have worked on a lot of period films, which take place in the 18th and 19th centuries, in France. But I started sketching ideas almost two years before we started shooting. We had an on-going dialogue about the style and the fabrics, and how every dress was there to support the journey of the character. So what I love about the team is that they don’t just create costumes for the characters; they create dresses that tell the audience stories. They created beautiful dress, and took a lot of liberties with the fashion of that time (Interview: Sophie Barthes Talks Madame Bovary). Nothing about this inspires me to want to watch it. It just seems SO heavy handed. What’s with all the screamingly bright colors??

Which is your favorite of Christian Gasc’s historical films?