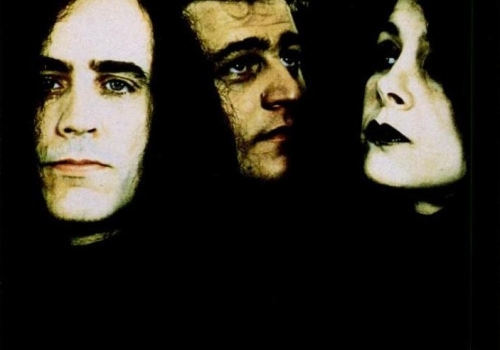 A hill I will totally die on: American band Concrete Blonde ended up making the first, and arguably, the best adaptation of Anne Rice’s Interview with the Vampire, beating the film version starring Tom Cruise and Brad Pitt by several years.

Oh sure, I can hear you scoffing now. This is just a band faffing about in period costumes to rock music against some vaguely old-y time-y looking décor accessorized with tarot cards and bugs. There’s no way that this is actually a song about Lestat and Louis and any of their shenaniganry. Think again, my friends.

Frontwoman and bassist Johnette Napolitano describes the inspiration for the song in this interview while the video was being filmed on location at gorgeous Ockwells Manor in Berkshire, England:

“We were on the road with Sting, and there’s this author, Anne Rice, who inspired this song. She lives in New Orleans and she’s a writer, and writes vampire stories, The Vampire Chronicles.”

Napolitano goes on to discuss a bit about how the video came about, which is interesting in the little snapshot it gives of the insane amount of work that goes into producing a 5-minute music video. She also discusses the fight she had to go through with Miles Copeland III, the head exec of Concrete Blonde’s record label, I.R.S. records, in order to secure the rights to the Anne Rice material just to make the video. She also mentions Andy Lee, the director of an earlier Concrete Blonde video, “Joey,” detailing how opposed the record execs were to the vision Lee and Concrete Blonde were trying to put together in support of “Bloodletting” (which cracks me up because “Joey” turned out to be such an era-defining video in terms of videography).

A further interesting note is that there are actually two versions of this video, both using footage shot by Lee at Ockwells Manor, but cut with different shots of Napolitano singing in a chair:

(This is the version I remember watching years ago, so I’m guessing it was recut and parts were reshot after the original cut was done. The first video I posted, however, appears to be the “official” video, at least according to the band’s official Vevo account.)

But anyway, back to that hill I’m totally prepared to die on. What we have here isn’t about Lestat, but a song from the point of view of one of his victims. It’s almost musical fanfic, if you will, and I love every single minute of it.

Do you have a favorite historical music video? Share it with us in the comments! And check out other music videos we’ve discussed!