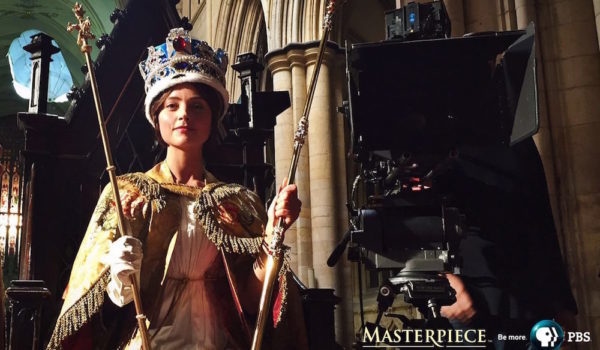 There’s always interesting historical costume movies and TV shows in the works, but one I’m particularly looking forward to is Victoria. Starring Jenna Coleman of Doctor Who fame as the queen, it will air in the U.S. on PBS sometime in early 2017, and in the U.K. on ITV. According to IMDB, the series will cover Victoria’s early life through her marriage to Prince Albert.

There will be eight episodes (supposedly, although I’m getting used to things getting edited together differently for U.S. viewing — sigh!). So far, I haven’t been able to find out who is the costume designer.

Here’s some pics and clips of costumes to whet your appetite!

It looks like the costume features a white brocade gown with very mid-1830s sleeves, round waistline, and wide lace bertha (the frill around the neckline), with red velvet and gold trimmed robes: 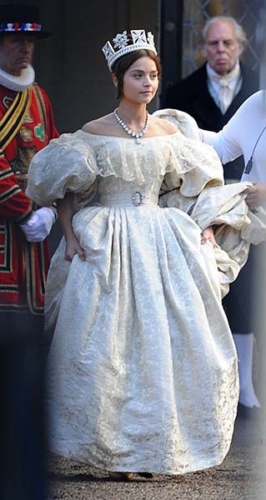 Here’s Coleman as Queen Victoria in her coronation gown. 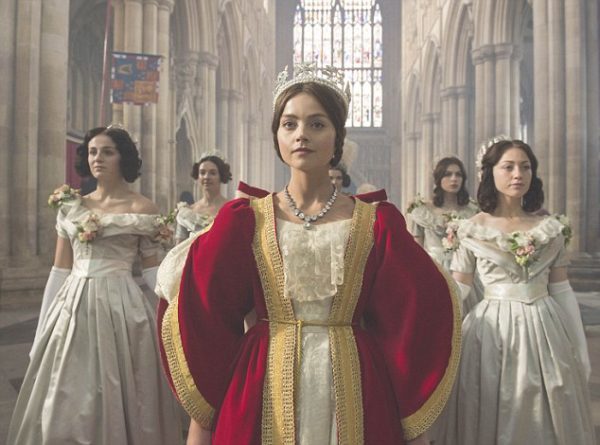 And with her coronation robes over that dress. 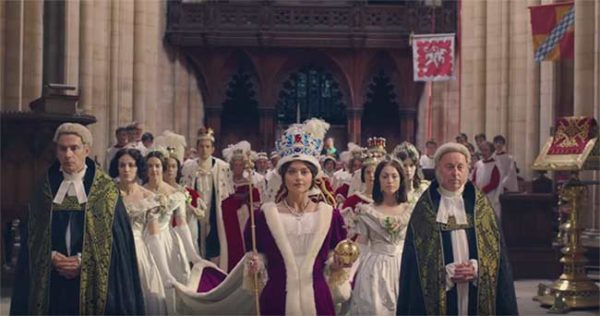 And in full crown.

Compare it to the real deal: 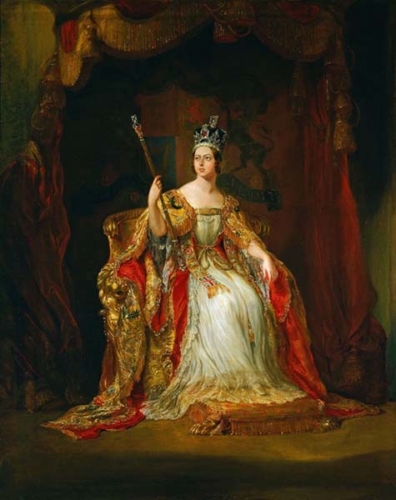 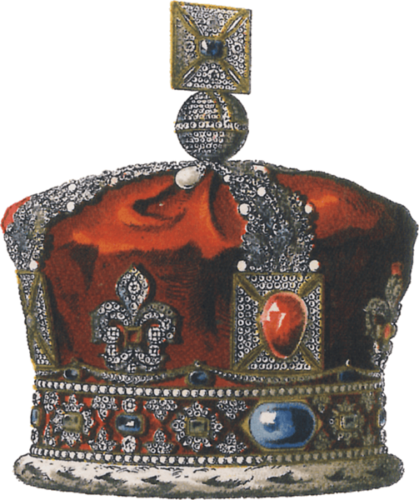 Here’s a drawing of the real Victoria’s crown, which has since been changed. Imperial State Crown of the United Kingdom, from Hugo Gerard Ströhl: Heraldischer Atlas, Stuttgart 1899, via Wikimedia Commons.

I’m really excited about this reproduction of the gown Queen Victoria wore to her first Privy Council meeting. Check out the costume in what looks like black silk satin: 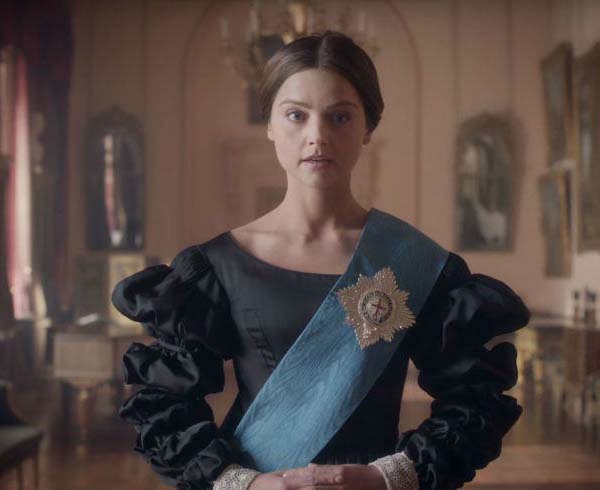 Check it out in action in this extended clip:

Then compare it to the real gown: 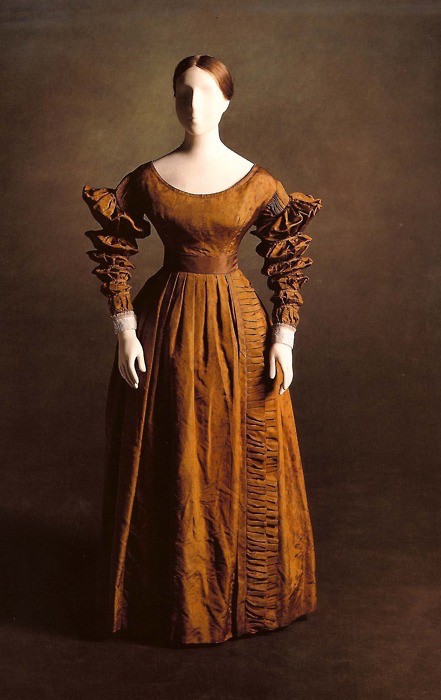 Here’s the real dress, which still exists but has faded from black to brown. 19th-century dyes were notoriously “fugitive,” meaning they change color over time. Mourning dress (once black, now faded) worn by Queen Victoria to her first Privy Council on 20 June 1837, the day of her accession to the throne, via Gogmsite. 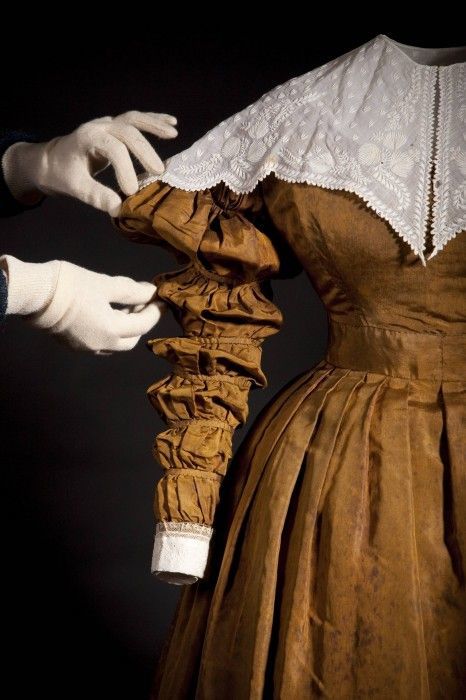 And a close-up of the really cool sleeves. Via Macleans.ca.

You kind of have to get this one right, since it’s been done so well previously AND it’s another gown that still exists. Unfortunately the only image I have found has Coleman half covered up with a robe, but we can at least see the ivory satin, wide lace flounce, and orange blossoms in her hair: 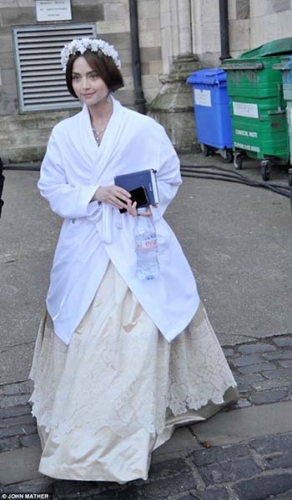 And again, the real thing: 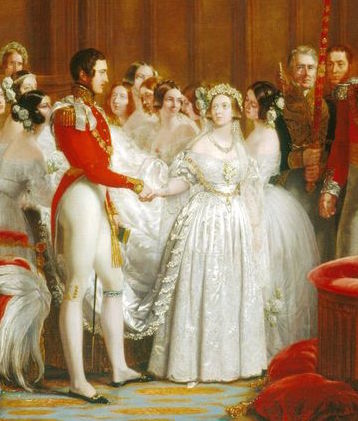 Apparently what it looked like on the day … I’m confused why the lace skirt flounce you’ll see below isn’t in this image, as I’ve definitely read that it was there. Note they got the hair right! Detail of The Marriage of Queen Victoria, 10 February 1840 by George Hayter, 1840-2, Royal Collection, via Wikimedia Commons. 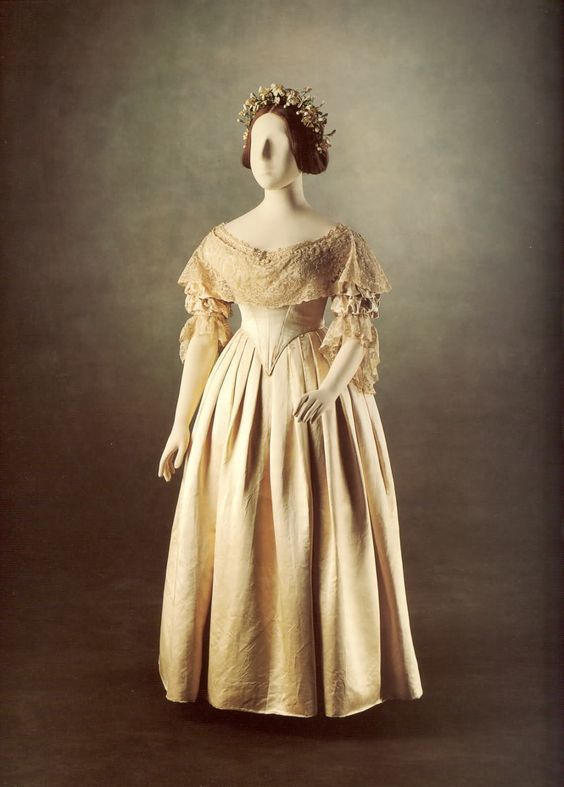 Again, the real dress still exists, although it is missing its lace flounce. Queen Victoria’s wedding dress, Museum of London, via lamodeillustree.livejournal.com. 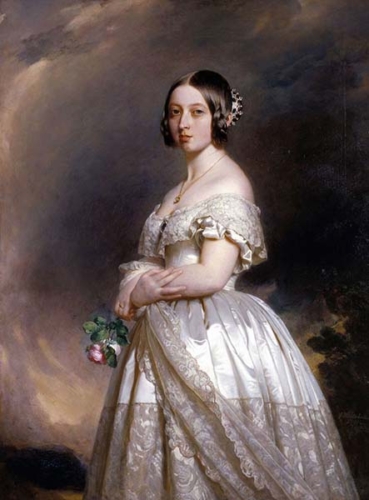 This isn’t the same dress, but it’s a good example of what the missing lace flounce on the skirt would look like. The Young Queen Victoria by Winterhalter, 1842, via Wikimedia Commons.

Other Costumes in Victoria 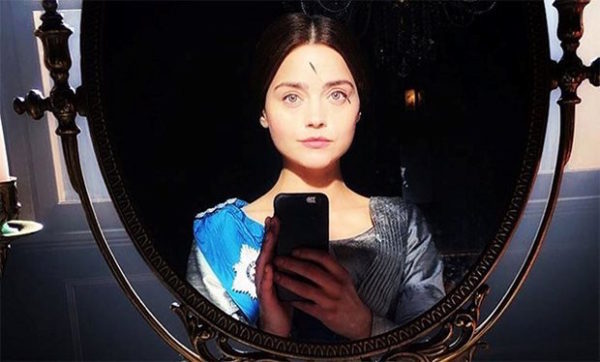 Coleman is wearing blue contacts to match the queen’s eye color. This dress appears to have a pleated V-shaped bit on the front. 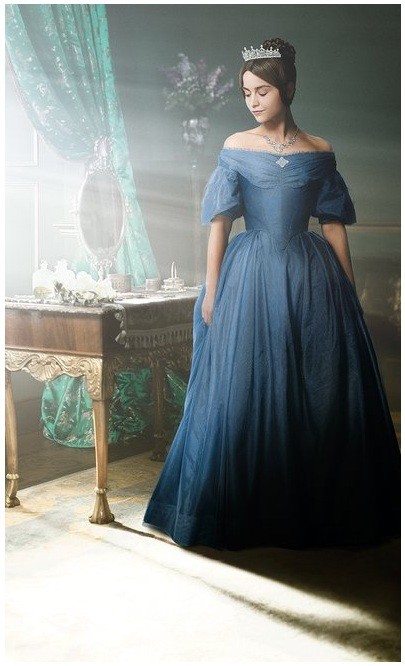 This is a terrible Photoshop job, whoever did this. Nonetheless, we’ve got a blue evening gown with bertha. 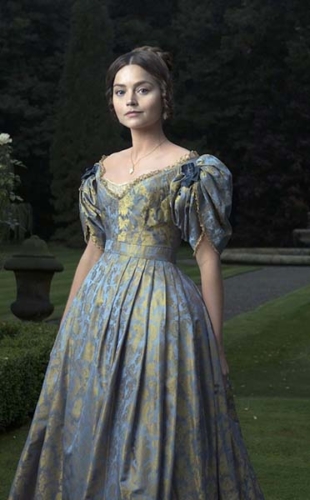 And a damask evening gown. 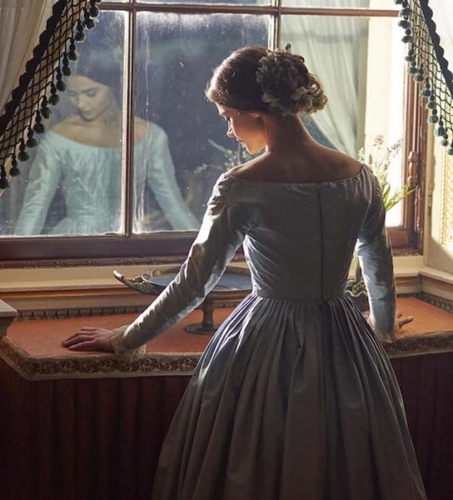 And a pretty blue taffeta day dress. I love all the froof in her hair! Clearly blue is going to be Victoria’s color. 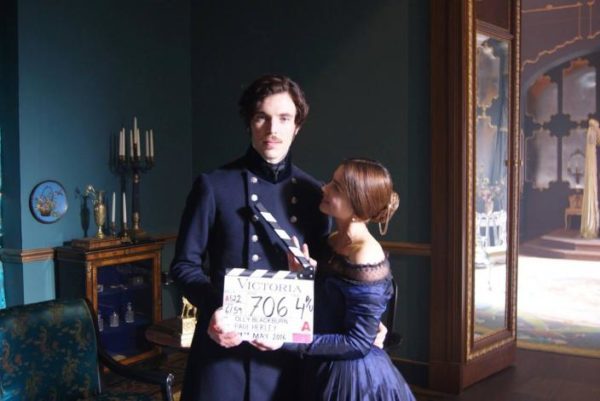 Here she’s in a royal blue (satin?) gown with a black net edging around the neckline. 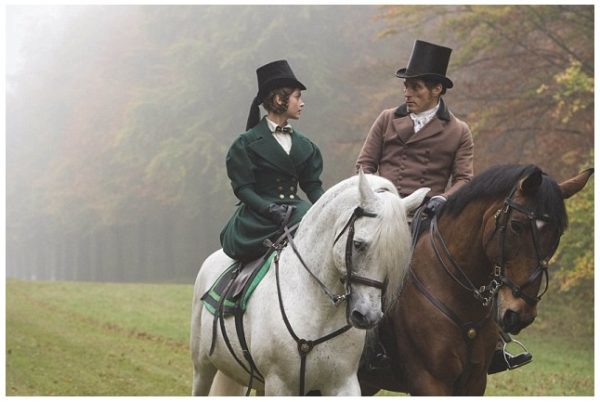 And a faaaabulous green riding habit with smashing hat and veil. Shockingly not blue!

Prince Albert will be played by Tom Hughes of Dancing on the Edge and The Hollow Crown: 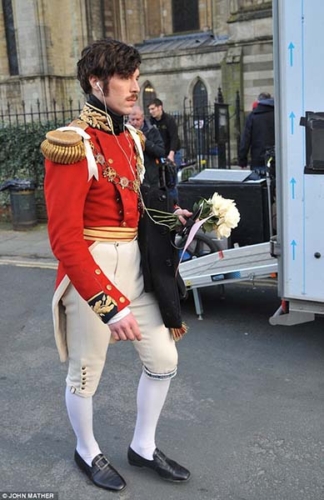 I very much approve of the uniform and the Tight Trousers. Rowr. 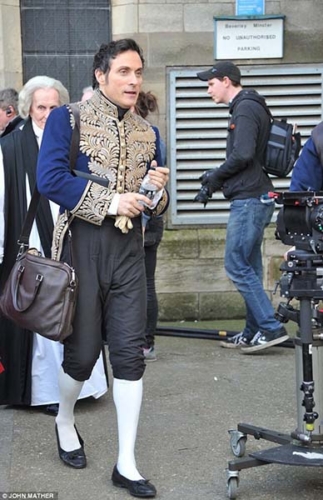 Hopefully the man bag won’t make it into the finished film.

Will you watch Victoria when it comes to TV in early 2017?