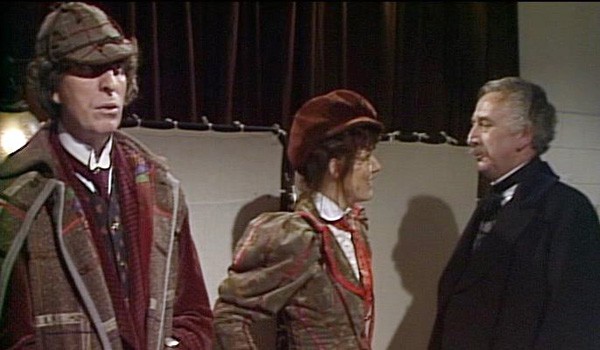 Set the story in Victorian London, give it a Sherlock Holmes rip-off, add a dash of misogyny, top it off with a lot of yellowface racism, and throw in a giant rat! What do you get? Doctor Who’s season 14 finale The Talons of Weng-Chiang (1977). At least the costumes are by John Bloomfield, who had previously designed the costumes for miniseries The Six Wives of Henry VIII (1970) and the 1972 movie version, plus the first season of the original Poldark (1975-1976). This was one of the most expensive serials produced by Doctor Who during the ’70s, and it mostly shows on screen, making it worth a review for the costumes alone.

Because, whoa, this was hard to rewatch for the story. I’ll summarize: The Doctor (Tom Baker) and his newest companion, Leela (Louise Jameson) arrive in London in the 1890s, where they get caught up in the mysterious disappearance / murder of several women. Leela, btw, is a “savage” who usually wears a skimpy outfit of animal skins and tends to solve most problems with violence first. 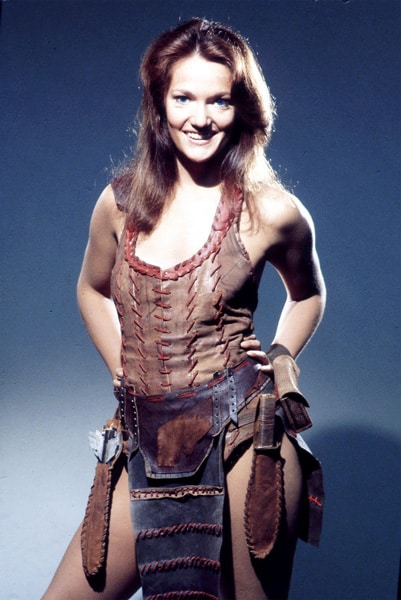 Leela of the Sevateem, in her usual garb. And you thought ‘jiggle TV’ was restricted to America in the 1970s!

She was intended to be an “Eliza Doolittle” character for the Doctor to “educate,” and this episode goes OTT with that conceit. The good thing for Frock Flicks, at least, is that means she’s made to wear historical garb the whole time. She complains about it, but she does it, down to her undies … which she runs around in due to, um, plot reasons :-/

However, the costume is proper Victorian garb with correct hairstyling, which is pretty damn amazing! When she and the Doctor arrive, she’s wearing an adorable knickers suit, rather like what a woman of the period would wear to ride a bicycle. The jacket has huge leg-o-mutton sleeves and is piped all over along the seams, she’s wearing a high-collared blouse with a tie, and you can just barely see gaiters on her legs below the knickers. 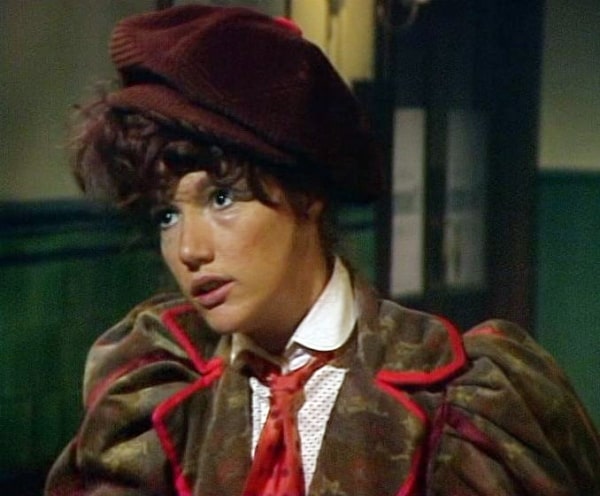 Note the dot patterns on her shirt & tie. Also, her hair is curled in an appropriate Victorian fashion & tucked up under the cap. 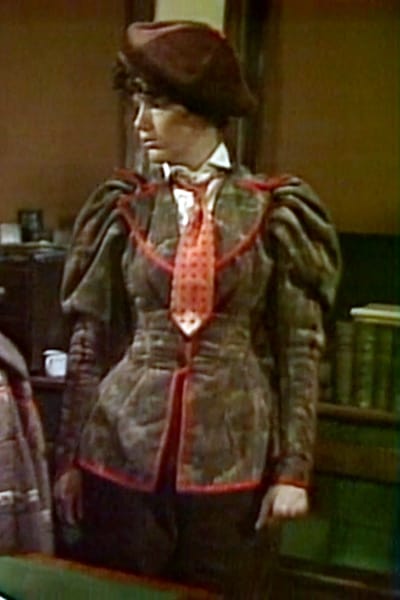 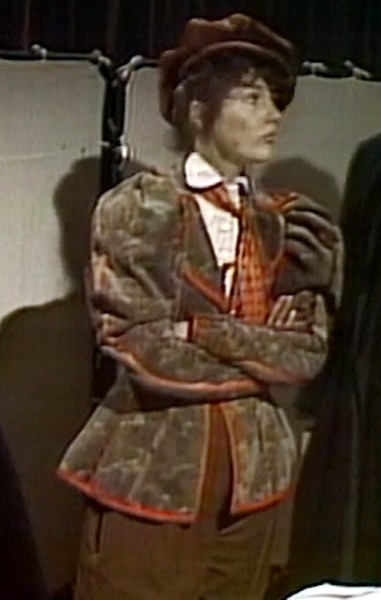 The knickers look more like men’s (or boy’s?) styles of the period than women’s, which would be fuller. But it works for her character. 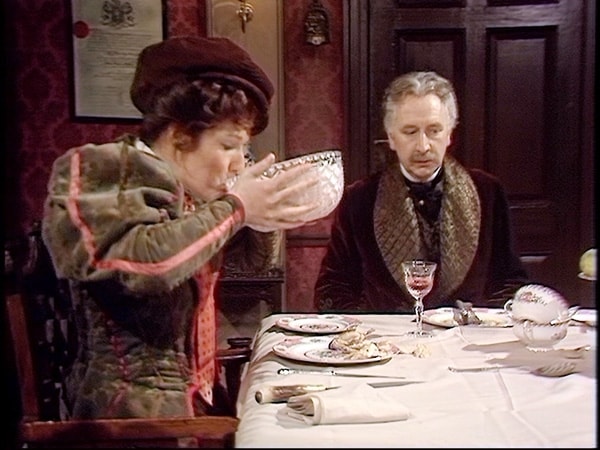 However, Leela swaps places with one of the unfortunate victims, changing into that woman’s clothes. And for some reason, she has to remove the borrowed clothes and ends up running around in her underwear in the sewers. At least this shows that she’s wearing Victorian undies (though no corset). This is also the only time her hair is down. 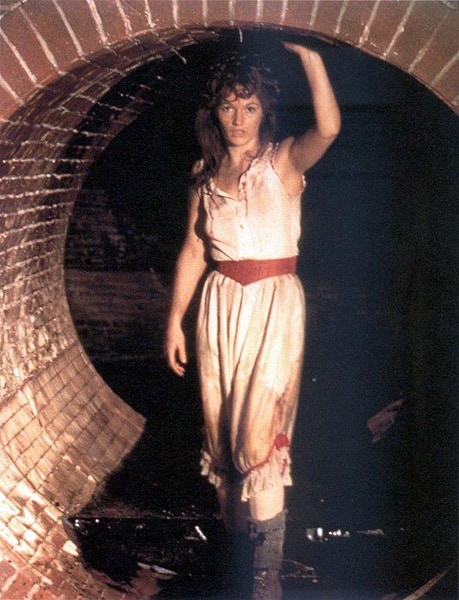 Maybe the belt is supposed to represent a corset?

When the Doctor and Leela attend the theater to get more info on the perpetrator behind this mystery, Leela is persuaded to wear a full ladies gown. +1 for the period hairstyle, -1 for obviously not wearing a corset. 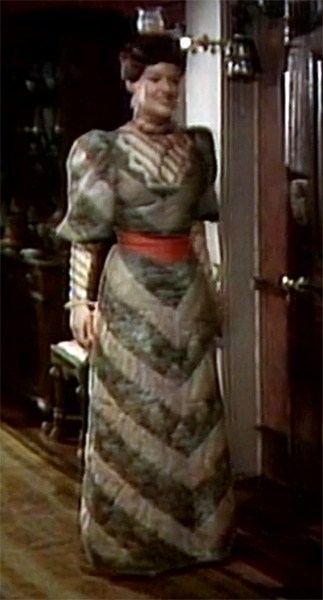 Sorry, Amazon/BritBox has a crappy version so my screencaps suck. 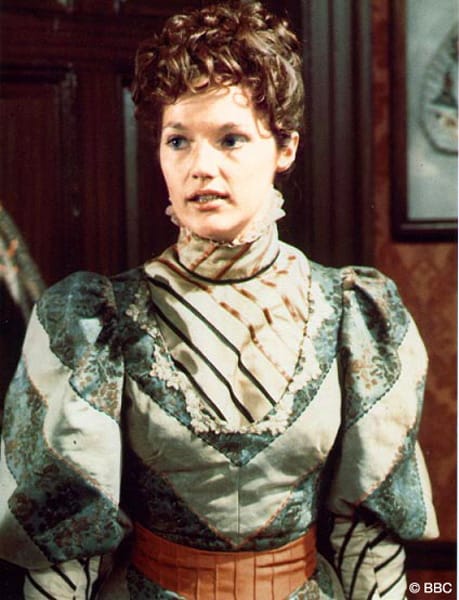 This promo pic shoes details better, including the wrinkles from not wearing a corset. Otherwise, this is a nice representation of the period. 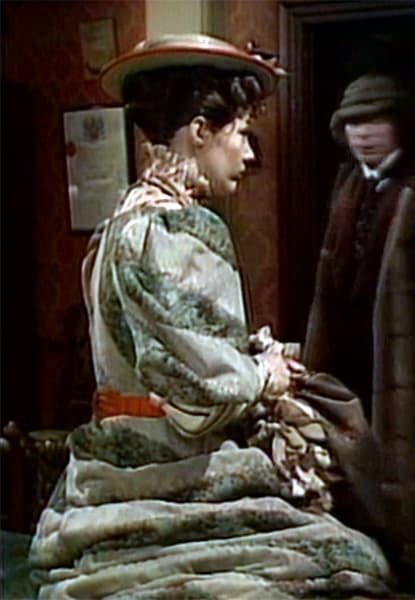 No obvious zipper, so that’s a win. 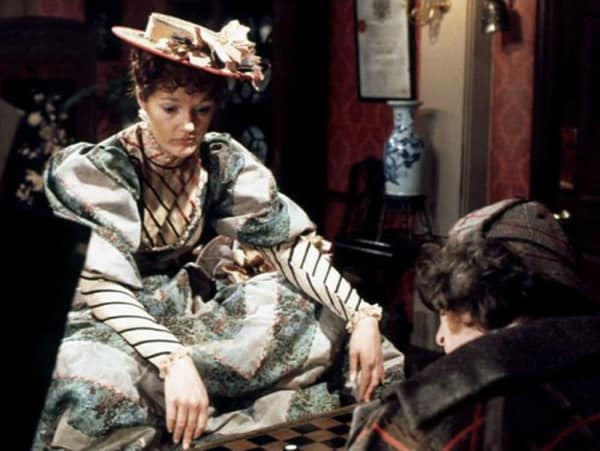 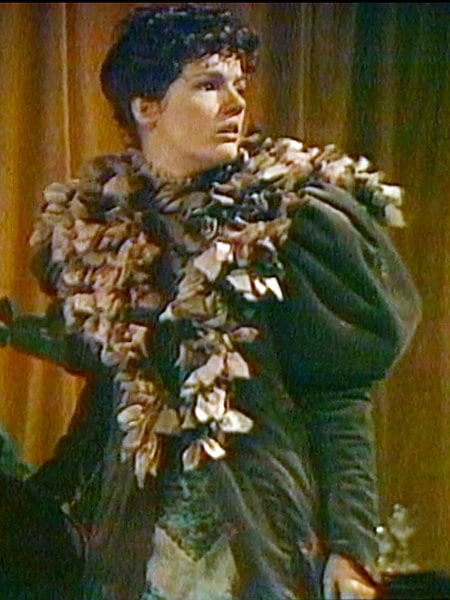 For going out to the theater, she wears this full-length coat with tons of embellishment.

The Doctor also wears Victorian costume in this episode — in fact, it’s the only serial in his entire run that the Fourth Doctor doesn’t wear his trademark long scarf! Instead, he wears a Sherlock Holmes inspired costume that John Bloomfield specially created for Tom Baker. 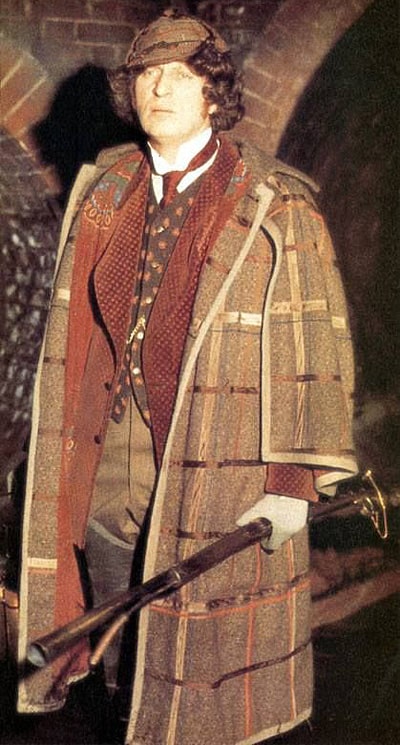 He has the classic caped Inverness coat, in a flashy plaid. 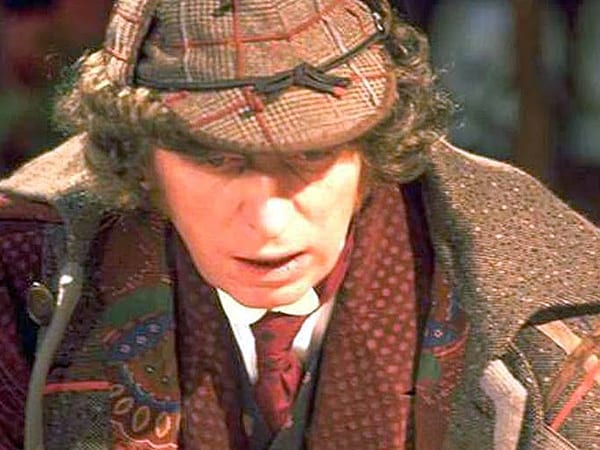 There’s that Deerstalker cap. Plus note all the patterns that really evoke the Victorian style — the coat is lined in paisley, the jacket has a dotted texture, and the tie has another pattern. 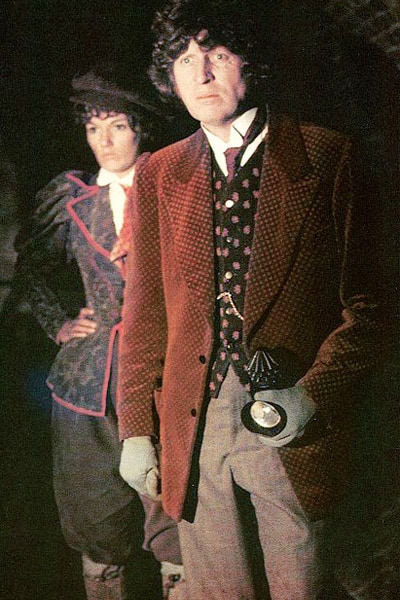 Under his coat, the Doctor wears a velvet patterned jacket and a print waistcoat with tweed trousers.

Do you remember this Doctor Who episode?