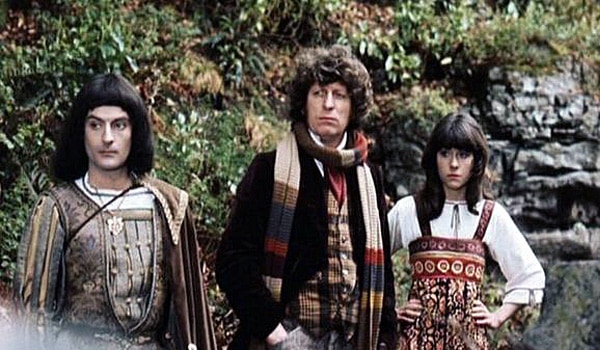 Let’s travel back in time with my favorite Doctor, the Fourth, played by Tom Baker, as he spins the TARDIS around and lands in 15th-century Italy during season 14 of Doctor Who for the four-part serial The Masque of Mandragora. I’ve previous looked at Doctor Who historical costumes in the reboot series, and recently I started looking at the classic series too. Hop onboard!

The gist of this particular story is that the Doctor and his companion, Sarah Jane Smith (Elizabeth Sladen), discover that a pagan cult is really a cover for an alien energy force in this fictional Italian duchy circa 1480s. The costume designer for the series at the time was James Acheson, whose name you might recognize from his later Oscar-winning and nominated work on The Last Emperor (1987) and Dangerous Liaisons (1988). Acheson says that many of the tricks he learned working on Doctor Who he’s used ever since — and considering how he did Dangerous Liaisons on a tight budget yet achieved stunning results, that was an excellent learning experience!

Multiple sources go back and forth stating that the costumes for this serial were borrowed from Franco Zeffirelli’s 1968 film of Romeo and Juliet OR they were borrowed from Renato Castellani’s 1954 film of Romeo and Juliet. But looking at footage and stills from each film (I’ve only seen the ’68 version in full), I can’t clear up this confusion. But first, let’s look at the Doctor Who costumes so we can compare. And there’s a lot of ’em!

First, we meet Count Federico, the bad guy and brother of the recently deceased duke. 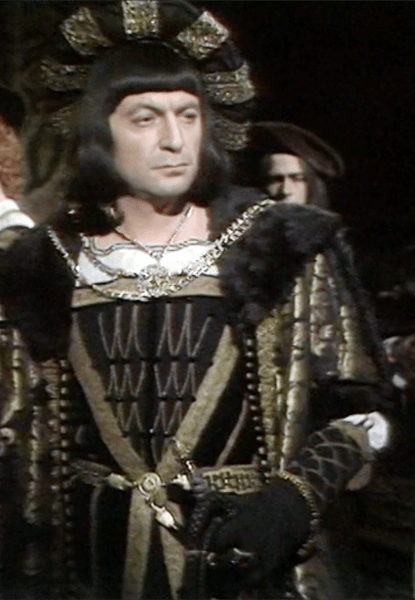 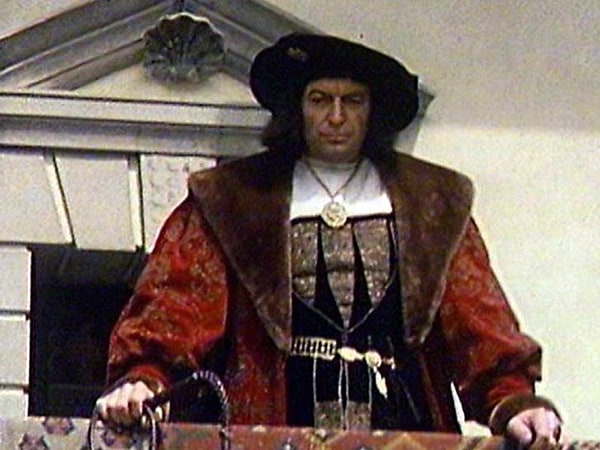 He changes into a red coat & new doublet to execute the Doctor. As you do.

Next, let’s meet Giuliano, heir presumptive to the duke. He is a total clothes-horse! We see him for four hours, during what can’t possibly be more than a day or two, at most, and he changes clothes five times. Check out his wardrobe: 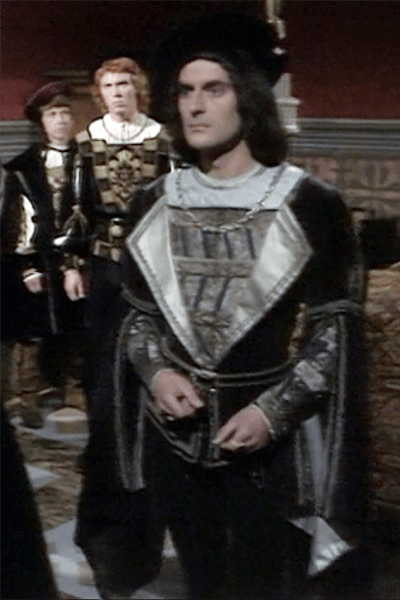 At his father’s deathbed. Flashy. Note his red-haired companion, Marco, in the background. 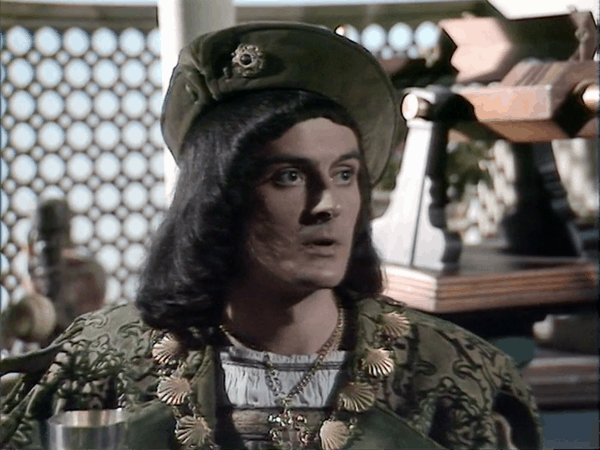 Giuliano changes into this green outfit next, with shell-themed jewelry. 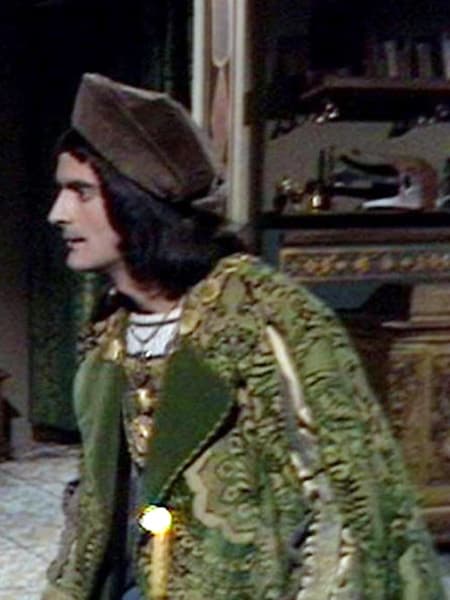 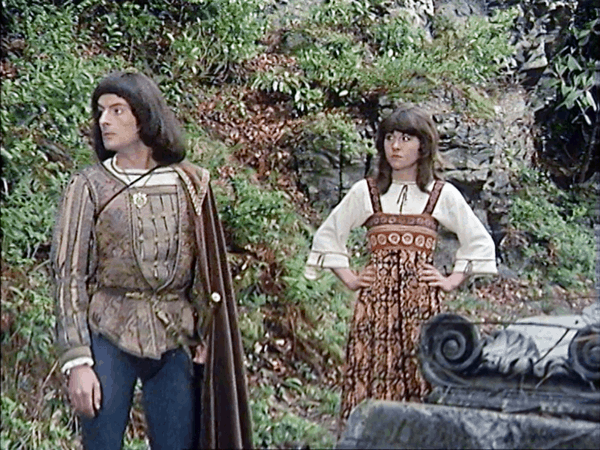 Giuliano takes the Doctor & Sarah Jane out to a ruined temple, & changes into this slashed doublet with a cape. 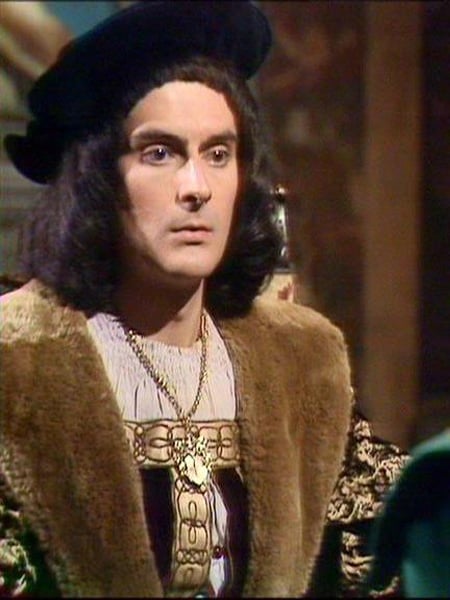 In the next scene, Giuliano is serious biznz with a fur-edged doublet & gold trim. 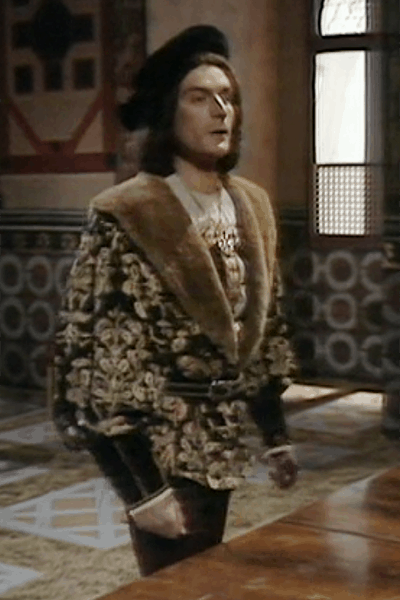 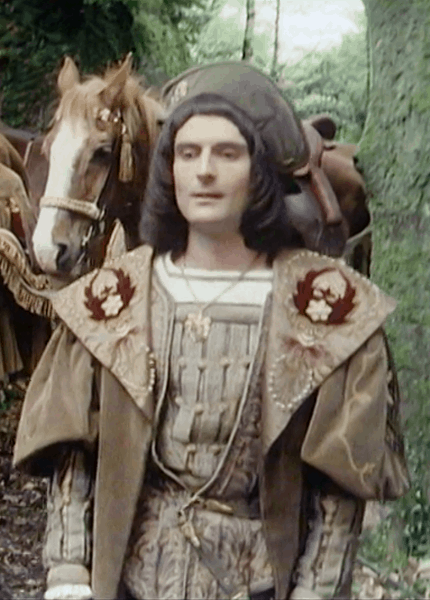 At the masked ball & farewell scene, Giuliano wears this embroidered coat over the same slashed doublet he wore out & about.

Then there’s the masque of the series name. 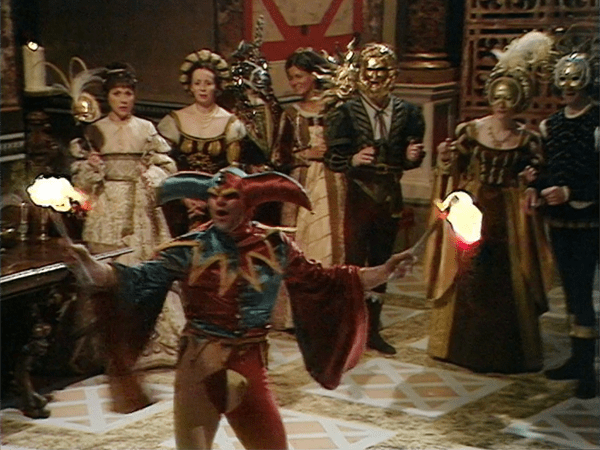 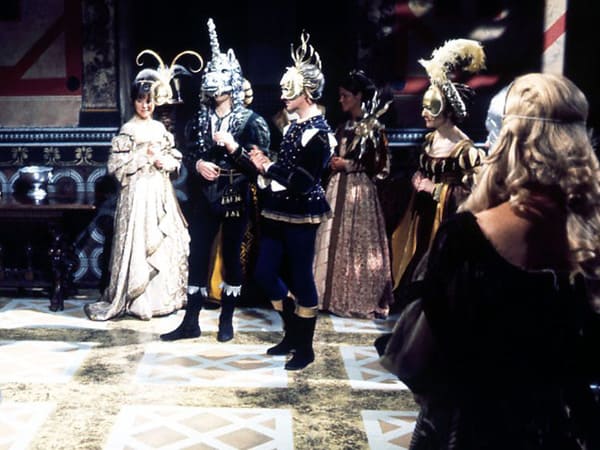 Everything looks pretty decent, until you notice the modern hair on the blonde extra at right.

For the masked ball, she dons period garb. 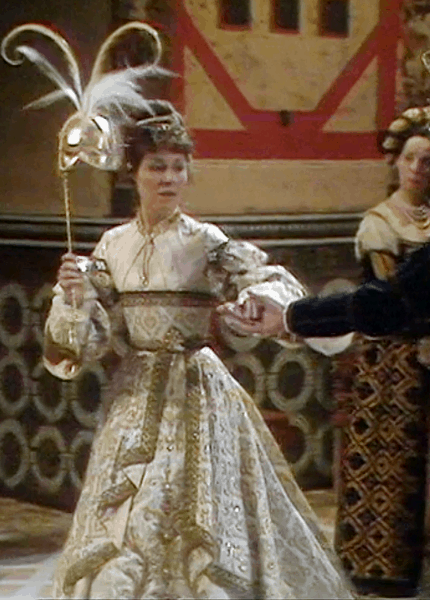 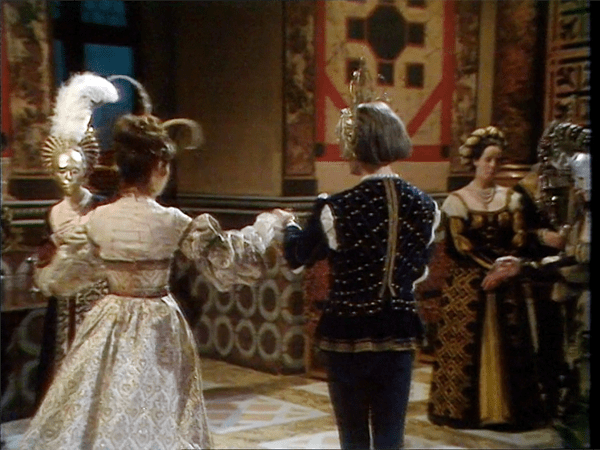 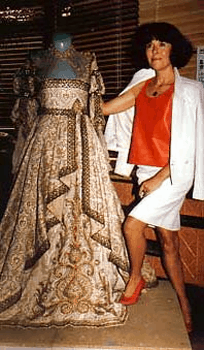 This is sweet — the actress Elizabeth Sladen with the masque costume!

And a few more costume shots. 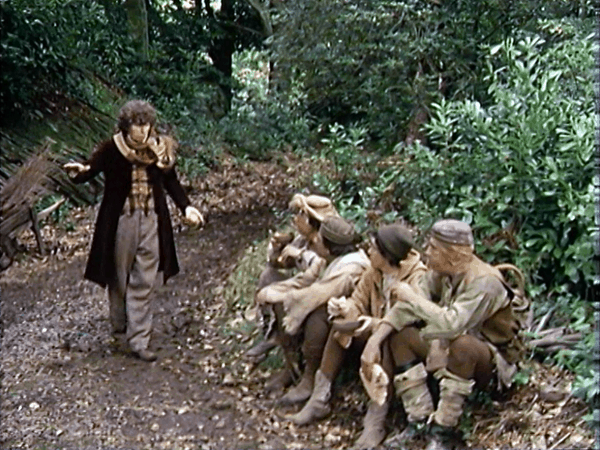 The Doctor chats up some peasants. They are NOT wearing unfortunate biggins. YAY! 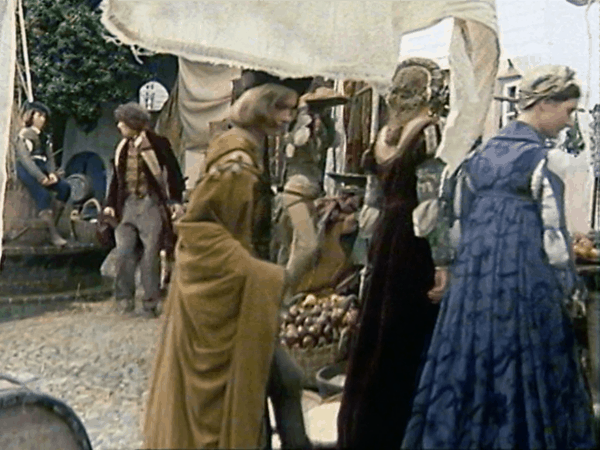 The Doctor is on the run, & I’m pleased that these women he passes by have their hair pinned up &/or covered. Plus, everyone seems dressed appropriately.

Now let’s look at the 1954 Romeo and Juliet with costumes by Leonor Fini. From stills and video, the design has a stylized, stripped-down, almost mid-century modern look. The colors are bright and harsh, not the rich jewel-tones we typically associate with Italian Renaissance art.

Romeo (played by Laurence Harvey), center, attempts to break up the duel between Mercutio and Tybalt. They’re all dressed in bright yellow, orange, and blue. 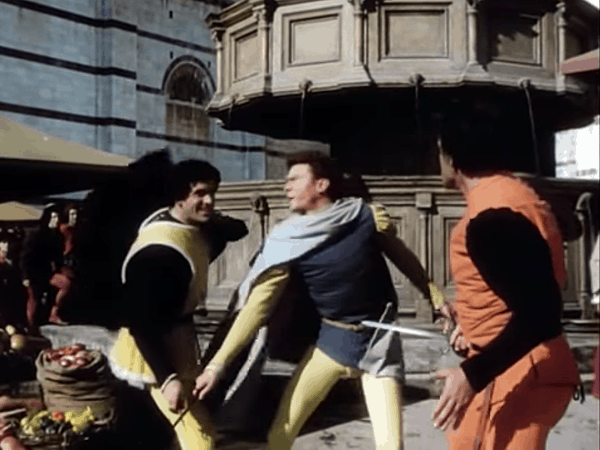 These are nothing like the costumes in “Masque of Mandragora,” right? 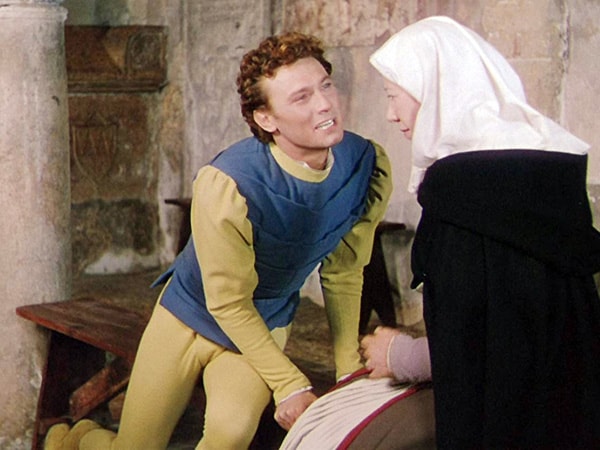 More detail of Romeo’s doublet, note the diagonal pleating, not a design seen in the 1480s, or in our Doctor Who serial. 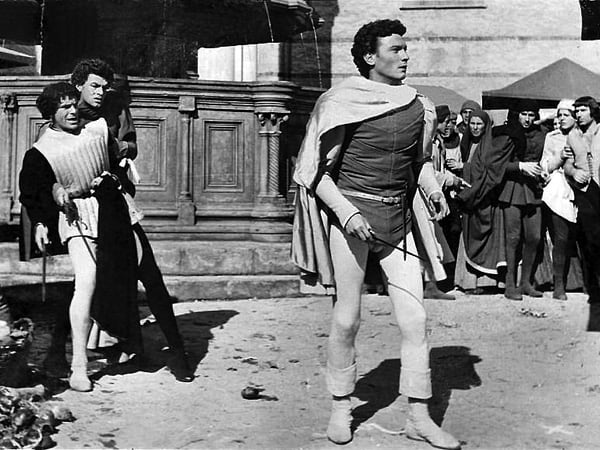 This black-&-white still shows more details not found in “Masque.” 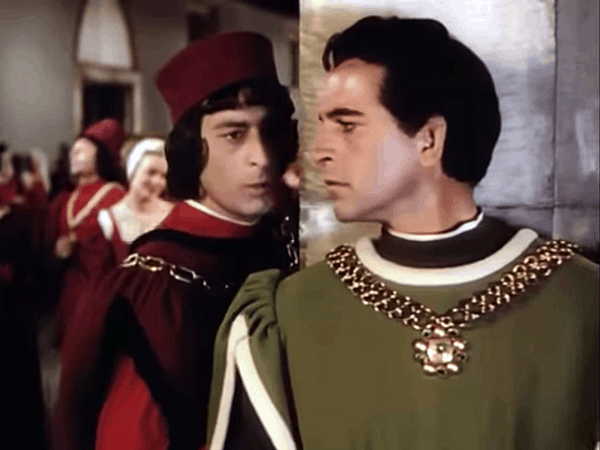 More ’54 R&J costumes that are nothing like our DW costumes! 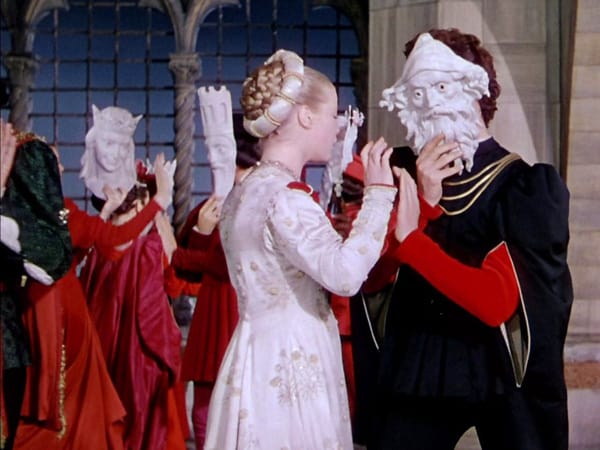 The ’54 Romeo & Juliet masked ball — IDK, did they borrow the masks for Doctor Who & paint them? Nothing else is remotely close.

If any costumes were borrowed from the 1954 Romeo and Juliet, maybe they were for guardsmen or the pagan cult’s robes. There’s no resemblance between that film’s costumes and any of the main character’s costumes in this Doctor Who show.

How about the 1968 Romeo and Juliet, with Oscar-winning costumes designed by Danilo Donati? The look is more historically accurate overall and has some of the warmth and richness associated with the period. But I can’t find any specific garments recycled from this film to our TV show. 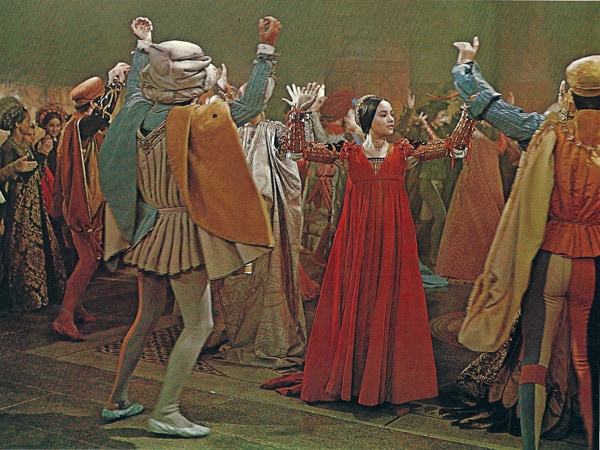 While some of the costume shapes are similar to the historical costumes in this Doctor Who show, nothing is identical. 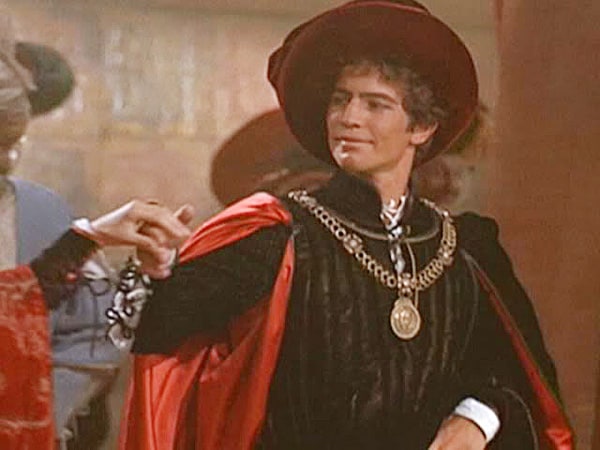 Tybalt’s doublet is the closest, but no cigar. The sleeves are different, & there’s none of the elaborate trim seen on Federico or Giuliano’s garb. 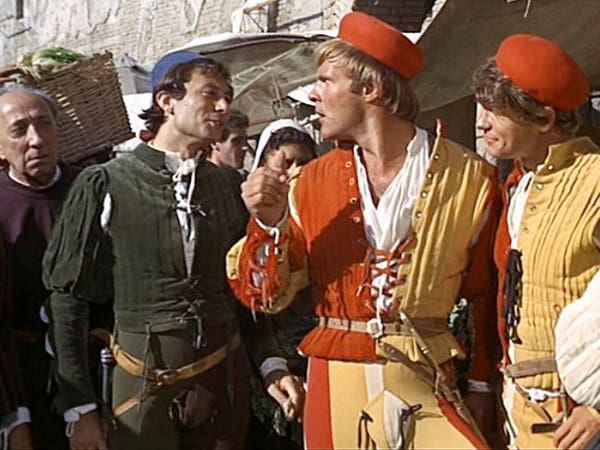 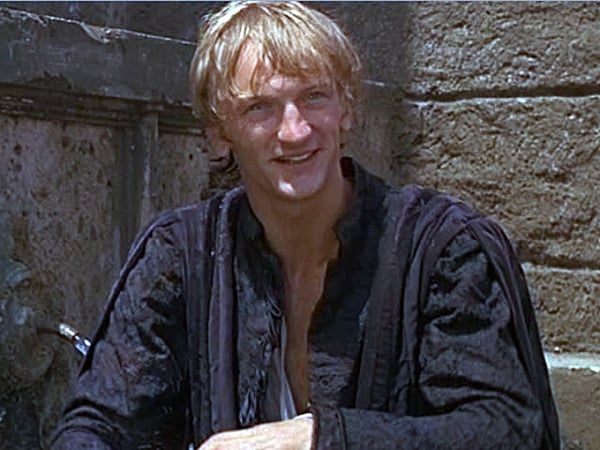 Mercutio’s doublet is in the ballpark, but it’s nothing shown onscreen in Doctor Who.

I think it’s clear the period costumes in “The Masque of Mandragora” were not reused from either of these Romeo and Juliet movies. They may well have been recycled from some other production since the BBC had access to a vast wardrobe. I wonder if the myths connecting this Doctor Who serial to those movies was started as a promotion gimmick? Seems unnecessary, but you never know!

Are you a fan of Doctor Who historical travels?