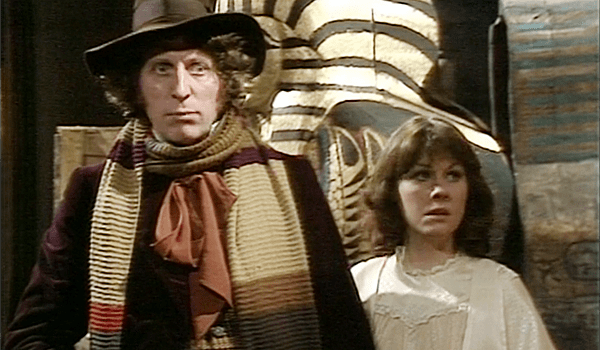 Way back in 2014, I wrote a series of posts about the historical costumes in the (reboot) Doctor Who serials with Christopher Eccleston, David Tennant, Matt Smith, and Peter Capaldi (one season of the later, anyway). As I noted back then, the British science-fiction/fantasy TV show had started over 50 years ago with a goal of teaching children about science and history. The main character, the Doctor, traveled through space and time, often landing in different points of Earth’s history to illustrate historical points. Early shows visited with Marco Polo, the Aztecs, the French revolution, the reign of Nero, Palestine during the Third Crusade, the St. Bartholomew’s Eve Massacre, and the Gunfight at the O.K. Corral. Off and on throughout Doctor Who seasons, the show would have more historical episodes depending on BBC mandate, ratings, and budget.

Some of the oldest serials have been lost entirely, but many year’s worth of extant episodes are available on BritBox in the U.S., and I love nothing more than kicking back with some Who after a long day. So I’m going to revisit some of the historical episodes, starting with my favorite Doctor, the Fourth, portrayed by Tom Baker. In his second season, Baker had his first historical episode, “Pyramids of Mars” (1975).

Set in 1911 England, the Doctor and his companion, reporter Sarah Jane Smith (played by Elisabeth Sladen), become embroiled in a mystery surrounding an archaeology professor Marcus Scarman and an alien superpower that’s manifested as the Egyptian god of chaos, Sutekh. This exteriors were filmed at the gothic Victorian mansion of the Stargroves estate in Hampshire, U.K., owned by Mick Jagger at the time.

Unlike many of the later episodes where companions dress up to fit the historical period where the Doctor lands, Sarah finds a period dress in the TARDIS’ wardrobe and comes out to the control room wearing this 1910s day dress. 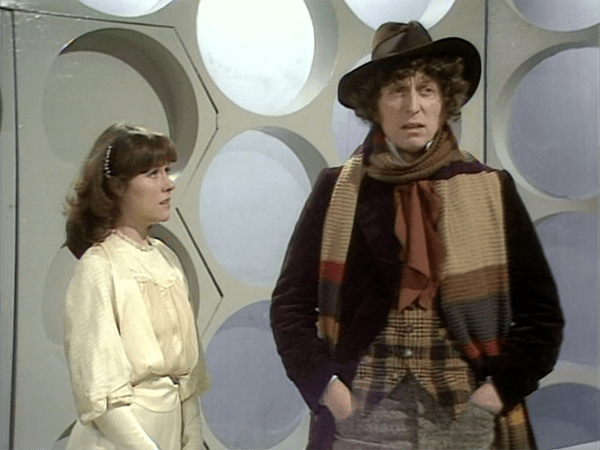 The Doctor comments that ‘Victoria wore that,’ which is a reference, not to Queen Victoria (as Sarah jokes), but to Victoria Waterfield (played by Deborah Watling). She had been the Doctor’s companion during his second regeneration (played by Patrick Troughton), and Victoria was the daughter of a Victorian scientist. 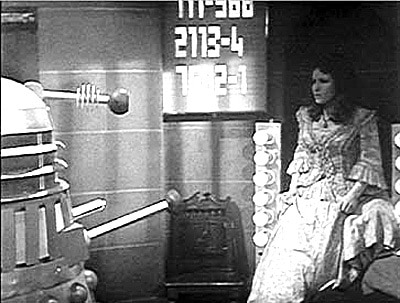 However, the Doctor met her in 1866, and what Sarah Jane wears is definitely 1910s, not 1860s. Unfortunately, the original video for many of the seven stories Victoria Waterfield was in have been lost, but looking at the few photos I could find, it doesn’t appear that she wore the most historically accurate of costumes anyway! 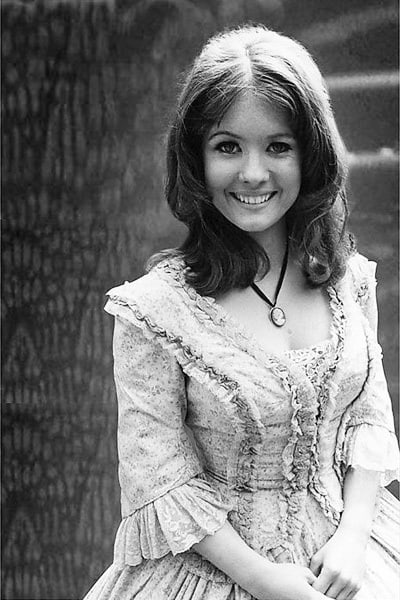 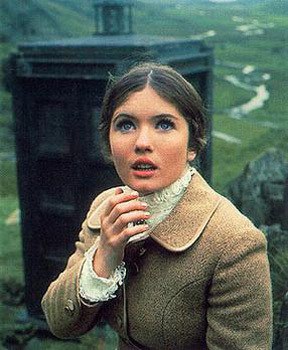 This promo image is a little better, but still.

Well, let’s see how much Doctor Who historical costuming improved from Victoria’s era of 1967 to Sarah Jane’s era in 1975…

Sarah Jane is obviously not wearing 1910s undergarments — no corset or petticoats — and when she and the Doctor run around the estate, hopping through windows and such, Sarah Jane hikes up her skirt revealing nothing but white tights and shoes of indiscriminate era. She makes no attempt to blend into the period with her hair or mannerisms either.

But it’s not a bad look. IMO — it’s very much a ‘modern person dressing up in historical clothes as a costume’ effect. Comparing to period imagery, you can easily see that she’s just missing the structural silhouette and accessories. 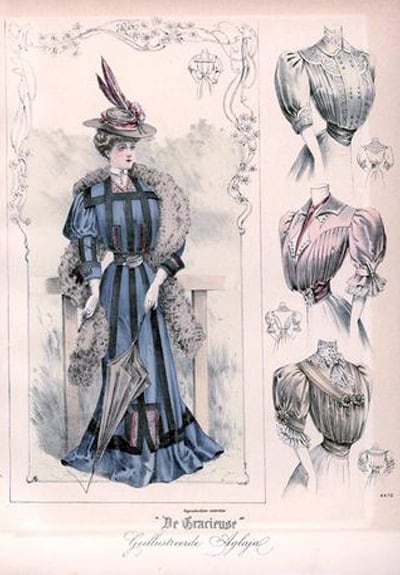 1906 fashion plate showing a similar gown in blue, and the related blouses emphasize the pigeon-front shape created with an S-bend corset plus the blouson-cut of the bodice. 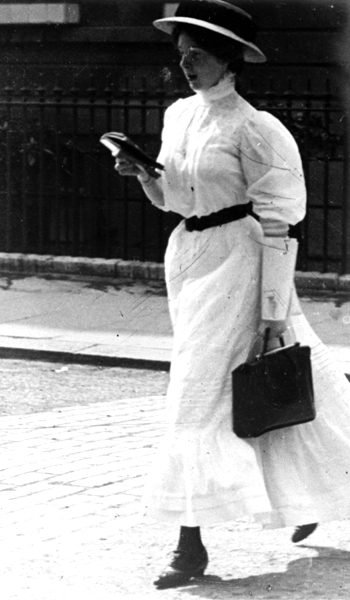 1906 photo by Edward Linley Sambourne of a working-class girl on the street shows a less exaggerated shape than the fashion plate, but she has the corset and petticoat that Sarah Jane doesn’t.

Sarah Jane’s dress is genearlly appropriate for 1911. She doesn’t need to be super fashionable, just of the era, and if put her hair up, she’d blend in fine. Though, spoiler, she only meets a couple people of this period and they all die before the end of the story, so I guess it doesn’t matter :-/ 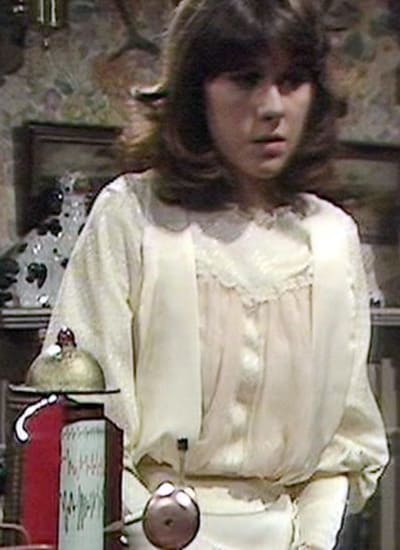 I do wonder if this gown was made for the show by costume designer Barbara Kidd or pulled from the BBC’s historical stock. Victoria’s ruffled and princess-seamed 1860s gown was recycled from a 1960s Victorian show on the Beeb, so who knows? Besides, Kidd had all those mummy-robots and the evil Sutekh to design for this serial.

See, when I was looking at the back of the gown checking for zippers (nope, looks like buttons!), I noticed the closure was rather bunchy. Could it be because this gown didn’t quite fit Elizabeth Sladen and was pinned or tucked in? 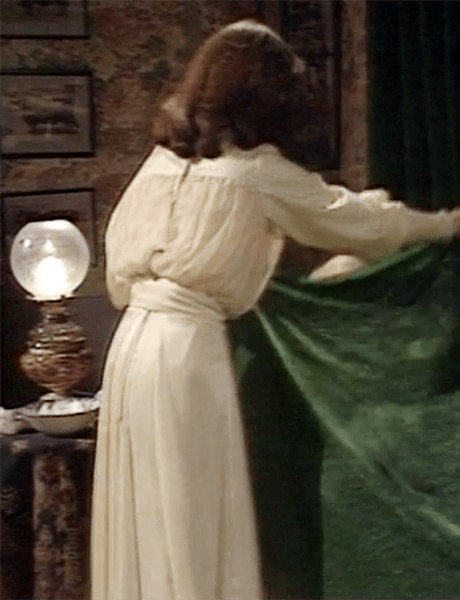 Or am I overthinking it? If you’ve seen this gown in another BBC show before 1976, shout out! And drop a line to Recycled Movie Costumes too :)

Are you a fan of Doctor Who historical episodes, classic or reboot? Who’s your favorite?